Few cars are more iconic than the Corvette. We visited the assembly plant and National Corvette Museum in Bowling Green, Kentucky to see why. 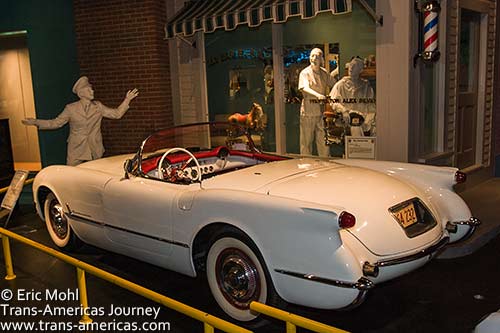 General Motors premiered the original Corvette (pictured above) in 1953. Only 300 of them were ever made and they were all white and sold for a base price of $3,498. One of these originals just sold at auction for $445,500.

One of the most enduring and iconic cars ever produced in the United States debuted in 1953 at the awesomely-named General Motors Motorama. It soon became the car of choice for the likes of James Dean and Karen’s dad. Our tribute takes you inside the Corvette Assembly Plant and National Corvette Museum both in Bowling Green, Kentucky. 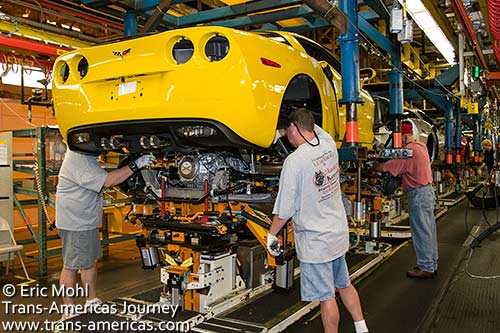 Putting the body on the drive train inside the Corvette factory in Bowling Green, Kentucky.

We expected the tour of the Corvette assembly plant to be mired in all kinds of dull safety-first rules and regulations, but apart from the “mutilation prevention kit” that we were handed prior to take off (this turns out to be pieces of fabric that covers your watch, rings, etc and they’re meant to prevent mutilation of the cars, not of you), the tour (US$7) took us shockingly close to the action. Nothing was behind glass, the workers weren’t swathed in hazmat suits, various work stations had radios playing classic rock. It felt like a club full of friends who occasionally get together to build cars. 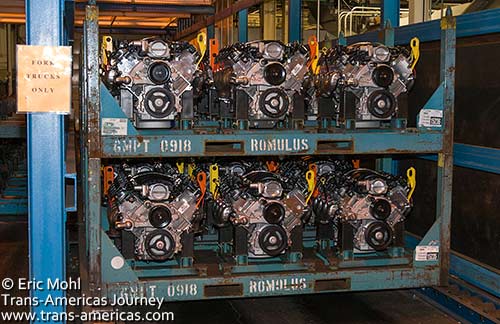 A few thousand horses stacked up in engines waiting to be put into brand new Corvettes.

Okay, there are a few rules at the 1 million square foot (10,763,910 square meter) plant where every Corvette has been made since 1981. You have to wear closed toe shoes (NO sandals) and you can’t bring in cameras, backpacks, purses, fanny packs. or electronic devices including cell phones, camera phones, or walkie-talkies. 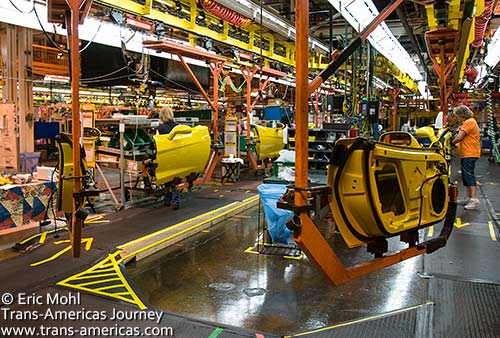 Doors on the assembly line inside the Corvette factory in Bowling Green, Kentucky.

Eric was allowed to bring his camera into the plant where we saw (and photographed) everything from neatly stacked rows of exhaust systems to workers checking every inch of paint under special, super-bright lights to the monsoon room where every car is bombarded with water to make sure all the seals are properly sealed to the lady who gets to carefully put the Corvette logo on the hoods. 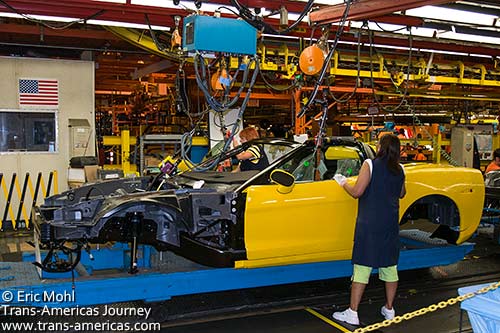 Every Corvette is made to order and a surprising amount of the work appears to be done by hand (no robots in sight), which is part of the reason why, we were told, it takes 32 hours to make just one car. For the truly obsessed, Chevrolet has a program that gives new Corvette buyers a VIP tour of the factory during which they get to watch their car in the final stages of being built. 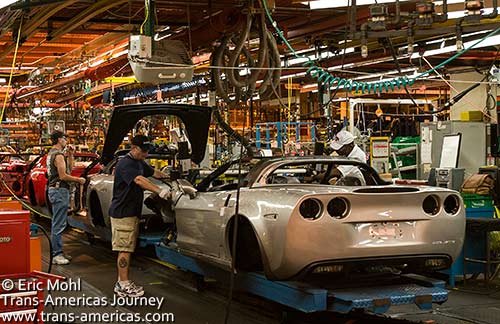 They may not be strictly hand made anymore but a lot of human touch goes into crafting every Corvette. 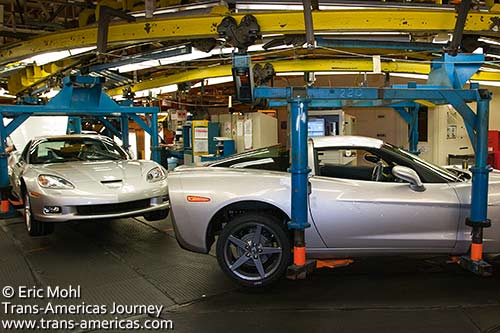 It’s a Corvette Merry-go-Round as finished cars move through the assembly facility. 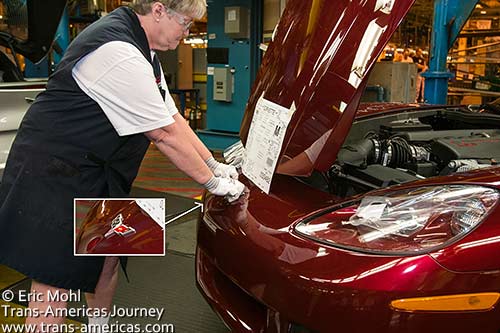 We wanted her job! This lady puts the Corvette insignia onto finished vehicles. 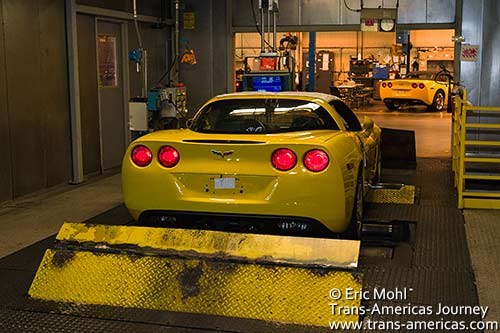 A new Corvette being put through its paces during dynamo testing. 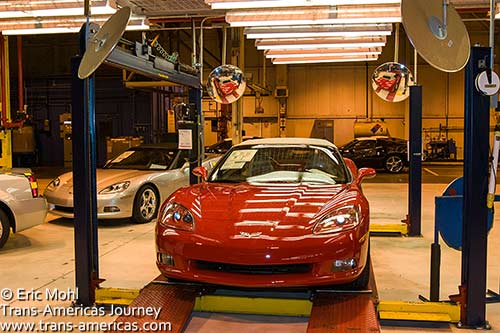 Bright lights and plenty of mirrors aid in the final inspection of the paint and finish of a Corvette. 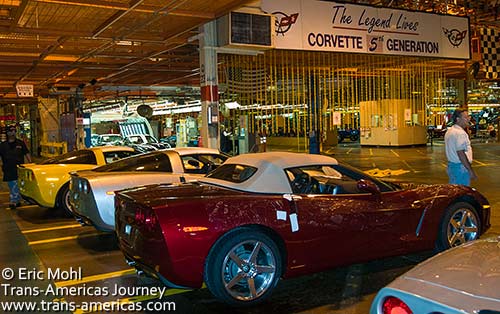 New Corvettes waiting for their new owners at the Corvette factory in Bowling Green, Kentucky.

If you’re a true Corvette lover (or happen to be the daughter of one), your next stop needs to be the National Corvette Museum ($10 adults, $8 seniors, $5 under 16) just down the road from the factory. This is where you can see around 70 vintage Corvettes—most of them owned by General Motors. The rest are loaned from private owners or owned by the museum. Here’s what we saw inside. 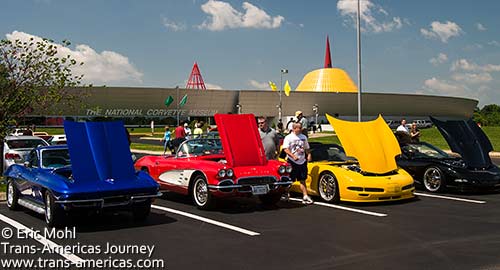 Vintage ‘vettes lined up in front of the National Corvette Museum next to the assembly plant in Bowling Green, Kentucky. 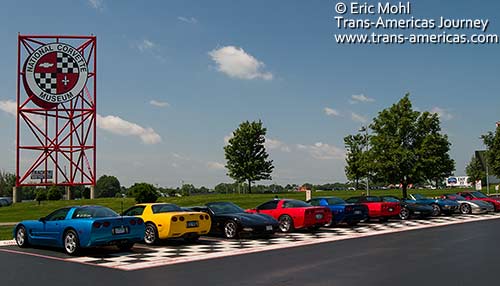 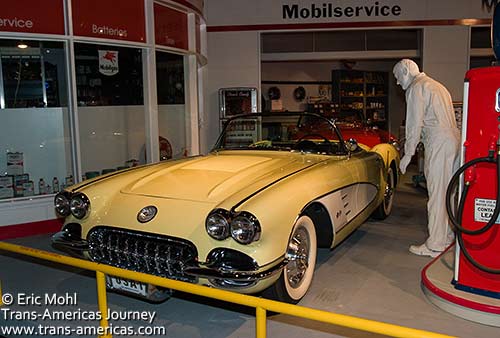 A 1959 Corvette pulls up to a 1959 gas station in one of the displays inside the National Corvette Museum in Bowling Green, Kentucky. 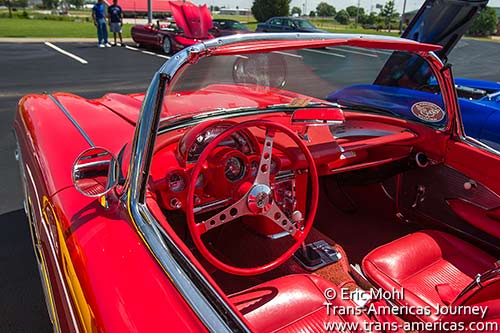 A little red Corvette in front of the National Corvette Museum.

If you’re really lucky you can even pick up your Corvette here as dozens do each month. We settled on a visit to the gift shop where you can pick up less pricey pieces of Corvette-ness like coffee mugs covered in Corvette logos, race car red nail polish, even cookies (and cookie cutters) in the shape of a Corvette.

Corvette Assembly Plant are temporarily unavailable. Check the plant’s website to see when it will re-open to the public.