The Pacific Coast of Mexico is well-known for its beaches and tourist destinations including Acapulco (which is currently in the midst of a re-birth) and the emerging Costalegre near Puerto Vallarta. The Gulf Coast, including the Costa Esmeralda, however, remains a mystery to many travelers even though the area has a distinct archaeological site and a compelling boutique hotel. 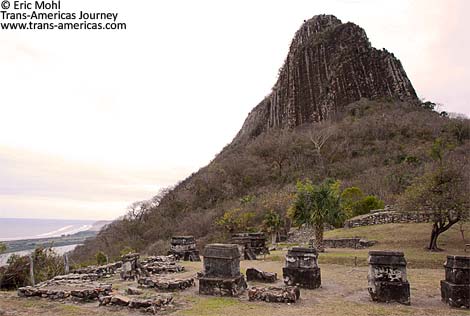 A brief but stunning section of the Gulf Coast has been dubbed the Costa Esmeralda (Emerald Coast). Unlike the Pacific Coast, the gulf side is punctuated by mid-size farms (vanilla is a major crop), cattle ranches, the country’s only nuclear power plant, and even some wind-whipped forests and sand dunes which make parts of the Costa Esmeralda drive feel a little like Highway 1 in Northern California. Overall the Costa Esmeralda has a much more lived-in feel than the Pacific side.

People have been enjoying the charms of the Costa Esmeralda for quite some time. Just off the coast road you’ll find the final resting place of some of them at Quiahuiztlan Toltec Archaeological Ruins (admission 31 pesos or about US$1.65). 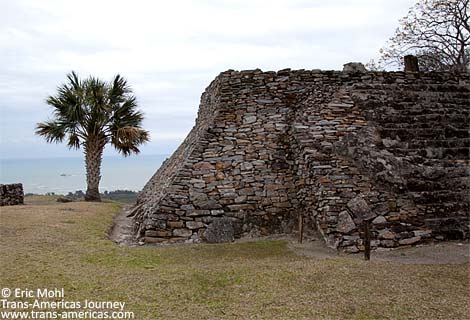 Pyramid 2 with the sea in the background at Quiahuiztlan Toltec Archaeological Ruins.

The Toltec people lived (and died) here for hundreds of years and archaeologists have unearthed more than 70 mini-temple-shaped tombs here, all located high enough up the flanks of the towering Cerro de los Metates to get cooling breezes and enjoy million dollar water views. If a cemetery can be bucolic then this is it.

Sleeping on the Costa Esmeralda

We were headed for Hotel Azucar, a sweet (get it?) little beachfront boutique hotel that’s part of Grupo Habita which operates about a dozen of the chicest boutique hotels in Mexico (plus one in New York City and Chicago). 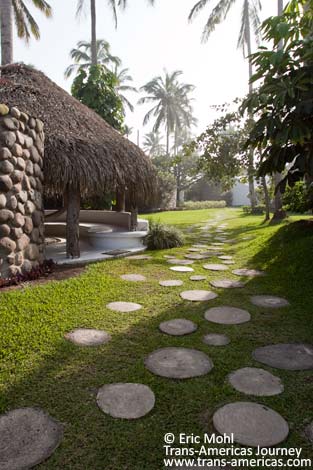 Even the paths are charming and intimate at Hotel Azucar on the Costa Esmeralda in Veracruz State.

At Hotel Azucar we found a couple dozen rooms in a sprinkling of thatch-roofed stand-alone bungalows dotted throughout a green swath of land that culminates at the Gulf of Mexico. All rooms have a welcoming patio with a hammock and an outdoor rinse shower….and a whole lot of white. 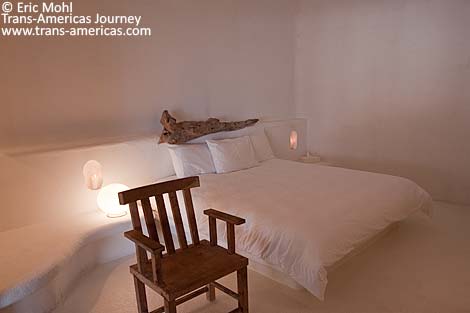 Our room at Hotel Azucar on the Costa Esmeralda in Veracruz State was almost entirely white except for.

Our room was, by far, the whitest room we’ve ever stayed in. Clever DIY design touches like an elegant lump of driftwood mounted to the wall as a headboard and rebar (painted white, of course) twisted into towel hooks and light switch covers keep the feeling homey, not antiseptic. 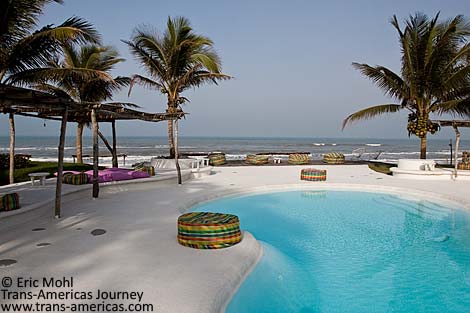 The pool at Hotel Azucar on the Costa Esmeralda in Veracruz State is just steps from the beach and cleverly employs an actual black inner tube as a life ring.

Hotel Azucar is also a relatively good value for money with US$145 weekday rates, a very well-priced spa (60 minute massages start at around US$40), and a delicious restaurant with good-value dishes that let you choose your meat (beef, fish, calamari, chicken, pork, etc) and your preparation style for around US$10 a plate. Sadly, their wines are incredibly marked up.