Is This the Most Unusual Adventure in Mexico? – Cuzamá, Mexico

The town of Cuzamá, not far from Merida, is the starting point for one of the most unusual adventures we had in Mexico. It involves a tiny old train line, horses, and swimming in crystal clear cenotes. Let’s go. 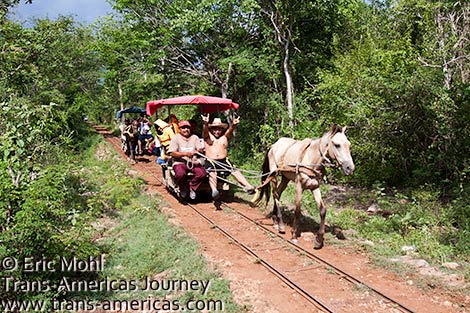 Horse-drawn carts running on a small-gauge railway line transport visitors to three gorgeous cenotes near the town of Cuzamá.

The horse-drawn cenote train of Cuzamá

Once we arrived in the tiny town of Cuzamá we negotiated with some locals and rented a cart mounted on railroad tracks and hitched to a horse the size of a large dog (200 pesos or about US$10). The cart was large enough to hold four people and a cooler and the locals were smart enough to bring the latter.

The small-gauge railroad tracks are leftovers from the days when this area was booming with sisal plantations which flourished by feeding a very hungry market for rope and twine. Before the advent of plastic rope killed the sisal (aka henequin) trade, these tracks were used to roll carts loaded with harvested agave from the fields to the processing factories. When that industry died, quick thinking locals decided to hitch tiny horses to homemade carts and roll loads of tourists on the tracks instead.

The tracks pass three spectacular naturally formed sinkhole swimming spots known as cenotes and that’s why we were there. We can’t say it was a comfortable ride–the tracks jolt you, the wooden carts lurch and bounce, and when two carts meet head to head one of them must disgorge its passengers, unhook the pony and get lifted off the tracks so the other cart can proceed. But it was worth it.

Swimming in the cenotes of Cuzamá

All three of the Cuzamá cenotes are spectacular and unique. All are full of refreshing crystal clear water and all three are below ground level which makes them extra dramatic. 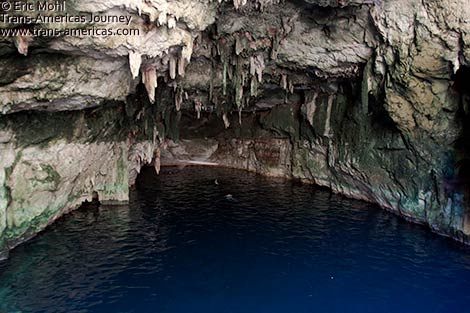 Cenote #1 in the Cuzamá cenote circuit in Mexico.

Cenote #1 was the easiest to reach via wooden stairs which lead down from ground level. Avoid the rickety, slimy, nail-ridden stairs that lead into the actual pool. Just jump in instead. There are also clean new bathrooms at this cenote and some ladies selling snacks and beverages (though bringing your own cooler is a better option). 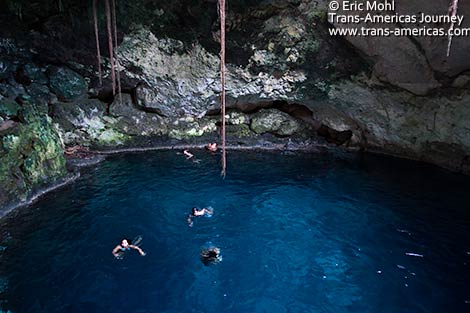 Unleash your inner Tarzan at cenote #2 by swimming out to that long root then using it to swing before jumping into the deep, clear water.

Cenote #2 was more crowded than the first one which made the steep and slippery wooden staircase down into the cenote even harder to navigate as dozens of people tried to move up and down the ladder at the same time.  With very little rim around the water itself, there wasn’t much room for standing around admiring the view. It’s best just to jump into the impossibly clear, deep water. Feeling a bit like Tarzan? Swim to the center of the cenote, climb up a mass of tree roots dangling near the surface and jump off. 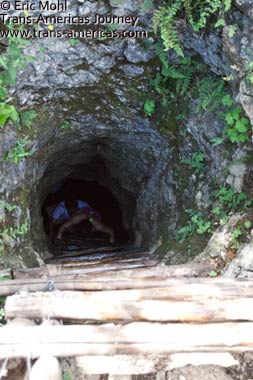 Cenote #3 was the most treacherous to reach. Accessed via a steep wooden ladder straight down a rocky shoot, it felt a bit like going into a well. The space opens up at the bottom of the ladder to reveal a huge cenote with really terrific rock formations and great color and shadows thanks to a number of “skylights” to the surface. 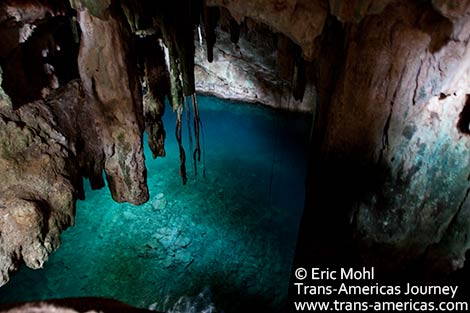 Cenote #3 seen from a viewing platform above it.

See just how beautiful these cenotes are, and just how bumpy the ride between them is, in our video, below.

Allow at least three hours for this trip. The cenotes are pretty spread out and you want time to swim and enjoy. Wear water shoes which you can wear while climbing up and down ladders since all three cenotes are below ground level. And remember that the place gets crowded on weekends.