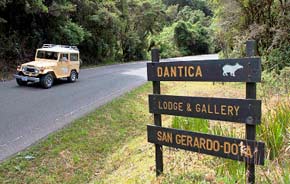 Dantica Cloud Forest Lodge is just two hours from San Jose, the capital of Costa Rica, but that’s distance enough to replace urban hustle with cloud forest calm. The drive up, up, up to Dantica takes you through swirling clouds and enormous trees in vast, forested hillsides protected as part of some of the least-visited parks in the country. Once you’ve wound your way up to 8,000 feet the clouds envelop you and, then, Dantica appears through the mist.

This 10 bungalow lodge was crafted onto the slopes of what used to be a blackberry farm. Not a single tree was cut during construction, no heavy machinery was used and each bungalow was designed to fit into an existing clearing on a 50 acre plot of land which is now the private Dantica Cloud Forest Reserve. It’s actually located within Quetzal National Park, Costa Rica’s youngest national park, and the owners like to call it “a park within a park.” 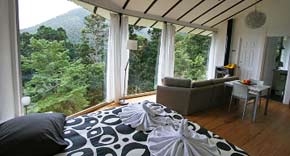 Even when you go inside your bungalow that “park within a park” feeling persists and the cloud forest continues to assert itself thanks to a complete wall of windows which keep the steep green hillsides and precipitous, cloud-filled valleys of the reserve front and center. The vista is dominated by giant black oak trees jutting straight up to 150 feet or more just a few dozen feet in front of your windows. An entire eco-system of air plants, moss, vines and orchids exists in their massive upper branches.

I spent half an hour watching a gorgeous black and white bird with a dramatically split tail soar in circles at eye level in front of the windows in my room. I still have no idea what kind of bird it was, reinforcing my belief that bird guide books would make a nice addition to the rooms.

In addition to those mesmerizing views each bungalow also has gorgeous wood floors, a clean, Scandinavian sense of design, a private patio, a refrigerator and coffee/tea making facilities, Wi-Fi and satellite TV plus ample, jetted bathtubs with a view. Each bungalow also comes with hot water bottles (which are filled each night and slipped under your sheets) and an eco heater which runs on ethanol made locally from sugarcane waste. You will need both. At over 8,000 feet, it gets cold all year round in San Gerardo de Dota. Down comforters from Norway kept me toasty in bed but I could have used a snuggly robe and warm slippers in the mornings. 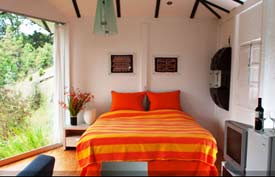 Owner Joost Wilms is a biologist from Holland and his wife, Maria Luisa Castro Fernández is a textile designer from Colombia. Joost spent years working in the Amazon studying tapirs which are called dantas. Joost’s nickname in the Amazon was Dantica or “the little tapir,” an irony not lost on Joost who towers over almost everyone at well over 6’ tall.

Tapirs, and many other animals, are making a nice comeback in the vast protected area in the San Gerardo de Dota region. Sightings of tapir are on the rise in the neighboring Quetzal National Park and animal cams have also caught puma,  jaguars and a black jaguar—one of only three sightings of this rarity in all of Costa Rica.

But it’s the birds that most people come to San Gerardo de Dota to see and I was not disappointed. Early one morning I climbed into Dantica’s 1973 Land Cruiser with the lodge’s local guide, Carlos, and we drove about 10 minutes down into the valley where we parked on the banks of the Savegre River. After walking just a few hundred yards we reached a dead tree trunk with the top snapped off. A hole near the top was home to a family of resplendent quetzals, one of the most flamboyant birds in the world. We staked it out with tripods, cameras and spotting scopes.

An hour later the female quetzal appeared. While colorful and attractive, she lacks the three foot long tail feathers of her mate. He soon showed up and we watched the vibrant pair dart in and out of the tiny hole bearing agaucatillo fruits for their young. 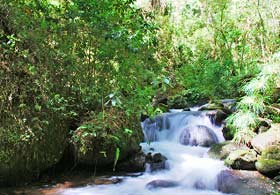 Speaking of food, the latest addition to Dantica Lodge is the full restaurant helmed by a chef who used to cook at the historic Gran de Oro Hotel in San Jose. I enjoyed chewy, hearty homemade tagliatelli with pesto sauce made with herbs from the lodge’s organic garden (US$8.50). Locally farmed rout, an ever-expanding kitchen garden, organic pork and many other locavore ingredients keep the menu fresh and varied. A la carte breakfast, included in room rates, is a full-on affair with fruit, freshly made juice, Costa Rican coffee, homemade bread and jam and a full selection of hot dishes to choose from.

Work it off by hiking the three miles of trails that wind up and down the steep slopes of the Dantica cloud forest reserve. Make use of the hiking poles provided in your room and keep your eyes open. Almost 120 species of birds and more than 50 species of mammals call Dantica home. 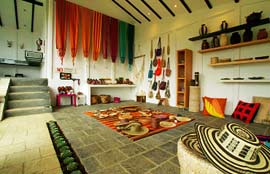 While at Dantica plan to exercise your shopping muscles too. Joost and Maria Luisa, who also run a popular art gallery in Jaco on the Pacific Coast of Costa Rica and will soon open a gallery in the capital, have stocked the Dantica gallery and gift shop with reasonably-priced authentic handicrafts in traditional and contemporary styles from Costa Rica, Peru, Colombia and Panama. Jewelry, wooden bowls, woven bags, rustic rugs ($25 and up), carved brass bookmarks ($27), brightly-colored key chains ($12-$17) and more will tempt you.

A word of warning: Seven of the 10 rooms at Dantica are quite a distance from the reception area and the restaurant along a gentle path through the property. If you have mobility issues or don’t want to have to walk for a few minutes to reach your room, request rooms 1, 2 or 3. I was in room 7 which was located about a quarter mile down the path. And be sure to check in at Dantica before 5 pm when the reception area closes and the charming staff that helps transport your luggage to your bungalow go home.

Rates from: US$132 double occupancy including breakfast; 15% discount for bookings of three nights or more; 5% discount if you pay in cash