Mention the Darin Jungle or the Darin Gap or just plain Darin and images of impenetrable greenery filled with hostile critters and even more hostile interlopers (drug runners, guerrillas, and others) spring to mind. Like most places, however, there’s more to Central America’s most infamous jungle, which straddles the border between Panama and Colombia, as we learned when we traveled there for four days of hiking in the Darien Jungle. 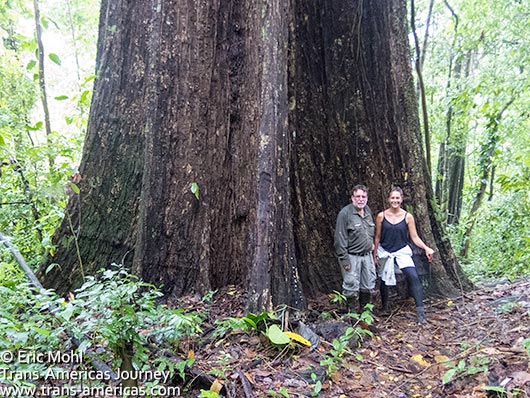 Plenty to see in the largest national park in Central America

Just because the Darin Jungle (sometimes spelled Darién) is remote, largely inaccessible, and little-visited doesn’t mean there’s nothing to see there. In fact, that remoteness and inaccessibility means that the Darin Jungle is a haven for flora and fauna. The Panamanian portion is a lush rainforest with peaks up to 6,000 feet (1,830 meters) and most of it is protected as the Darin National Park which is a UNESCO World Heritage site and the largest national park in Central America. 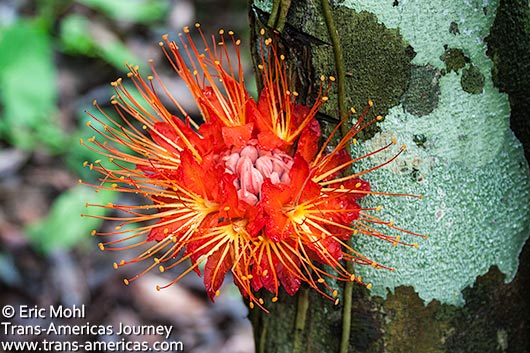 Though green dominates the palette in the Darin, other colors assert themselves too.

On the Colombian side, the Darin changes into a 50 mile (80 km) wide marsh which is even more impenetrable than the jungle on the Panama side. Much of the marsh is protected as part of the Los Katíos National Park which is also a UNESCO World Heritage site.  The two adjoining parks are home to more than 450 species of birds and over 500 types of fish. The Darin is also a place where the communities, cultures, and customs of the indigenous Kuna and Embera-Wounaan people are preserved.

Frenchman Michel Puech has spent more than 30 years in the Darién. In that time he’s developed a knowledge of the place and a bond with the people that allows him to take travelers deeper into the Darin. Locals even call him “Don” Michel as an honorific so we were excited to explore the trails and waterways of the Darién with him and his company Panama Exotic Adventures. 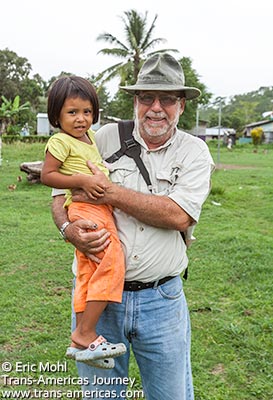 French tour company operator Michel Puech has spent 30 years in the Darién and earned the honorific “Don” from the locals.

But first, we had to get out of Panama City and reach Darien Province near the end of Pan-Am Highway in Yaviza. Unlike the rest of the country, this paved road had a lot of serious checkpoints along it where everyone had to show proper documents and special permits to be in the Darien (Michel arranged our permits). Officials don’t want people entering the area willy-nilly because of the dangers which range from some of the world’s deadliest snakes to some of the world’s deadliest bad guys (guerrillas, drug traffickers, etc). 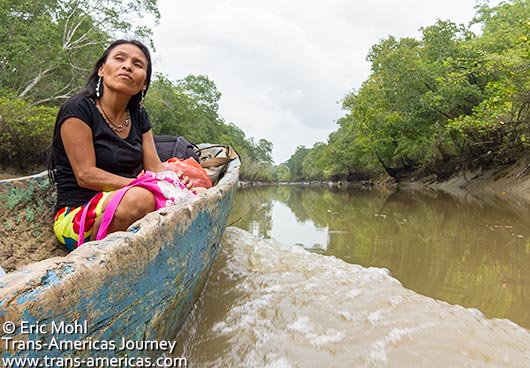 We gave a local Wounaan woman a lift on the Sabana River through the Darien Jungle.

We reached the town of Santa Fe and left the road behind. From there the only way through the Darien was by floating on the waterways or hiking on the trails that crisscross the vast area. We got into a wooden canoe with an engine and took it to the village of Boca de Lara where the Sabana and the Lara rivers meet. 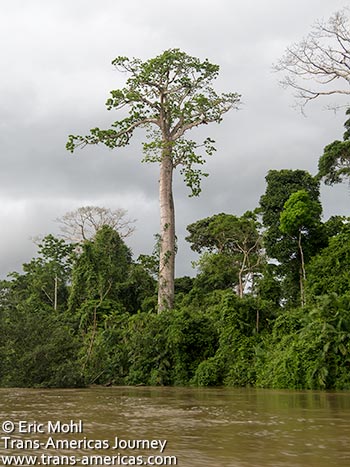 The few inhabitants of the Darien Jungle have small-scale farm plots for subsistence farming but they revere and protect old-growth trees like this one.

Boca de Lara is a Wounaan village that was settled by the historically nomadic Wounaan in 1973 after the Panamanian government said any that place with 100 people or more would get a school. Despite the settlement, many Wounaan still go off into the jungle for periods of time. 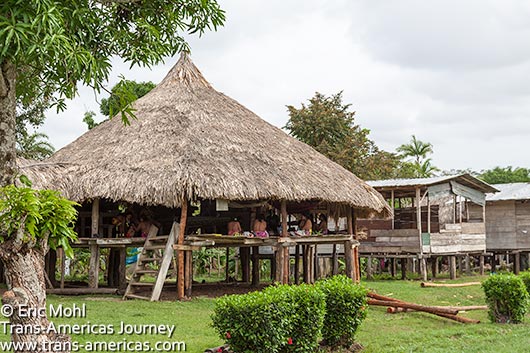 The Wounaan village of Boca de Lara in the Darien Jungle.

In recent years Michel has assisted Boca de Lara in many ways, including building his three-room Dosi Lodge here along with the villagers using their traditional architectural style. The employees are Wounaan and lodge guests are customers for their handicrafts too. 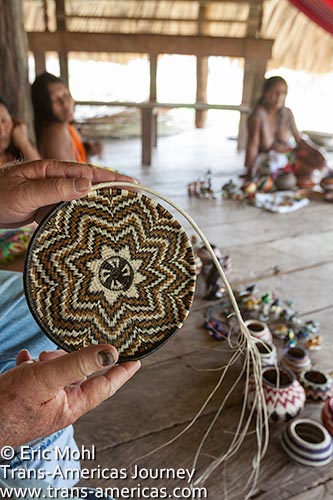 Wounaan women work on their intricate, traditional weaving in the village of Boca de Lara in the Darien Jungle.

After eating lunch at Dosi Lodge we saw some of the handicrafts made by Wounaan women who traditionally go topless, including elaborate basket weaving using local reeds and natural dyes. 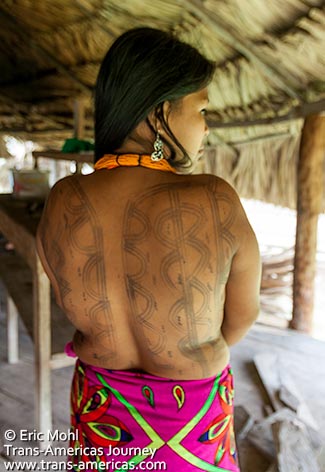 A Wounaan woman with traditional tattoos in the village of Boca de Lara in the Darien Jungle. 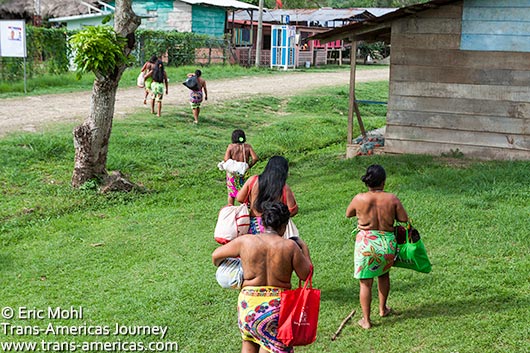 Hiking in the Darien Jungle

Later in the afternoon, a Wounaan guide led us on our first hike in the Darien Jungle. Commercial logging is a growing threat to the Darien but as we left the clearings around Boca de Lara village the jungle immediately closed in around us. The Wounaan have cleared some small-scale, subsistence farms in the Darin they’re tiny and spaced far apart with ample jungle left in between. The massive old-growth trees are obviously revered and left standing wherever possible, even in areas where the undergrowth has been cleared for a farm plot. 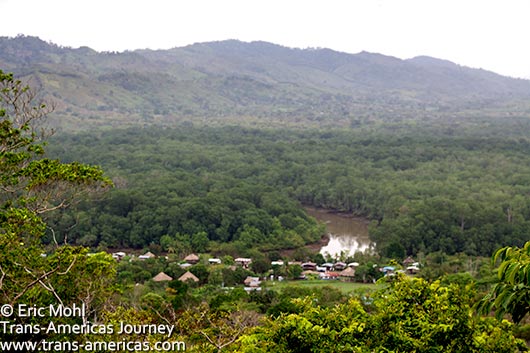 The Wounaan village of Boca de Lara as seen from a hilltop in the Darien Jungle.

After a brief hike, we reached a ridge above the village near the spot where Spanish conquistador and explorer (back in the days when those two things went hand in hand) Vasco Núñez de Balboa saw the Pacific for the first time in the 1500s. Balboa is considered to be the first European to lay eyes on the Pacific.

The French later stood near this same area and were inspired to consider the Darien as the first spot for their Panama Canal project because the natural waterways in the area seemed to make an easy route from ocean to ocean. The mountains they later discovered changed their minds and the French shifted focus to the Panama Canal‘s current site (though they failed to complete it, leaving that task to the US).

Michel told us that this area was also used by the US to install a radar station after the attacks on Pearl Harbor the CIA later put in an airstrip to monitor drug trafficking through the Darien. 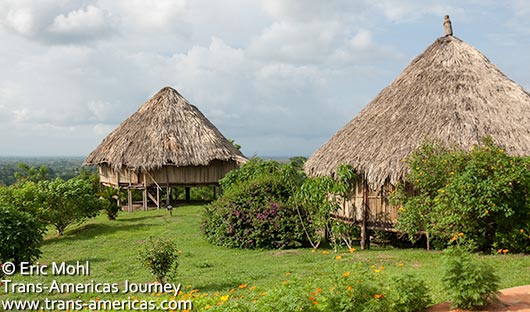 Buildings of the Filo de Tallo Lodge were built in a traditional round style with thatch roofs and split bamboo walls. The carved wooden figure on top is traditional as well and it’s considered good luck when it topples off.

Our first day of hiking in the Darien Jungle behind us, we headed to Michel’s Filo del Tallo Lodge which is named after the massive reserve it adjoins. The place has been designed to work well in nature using traditional Wounaan building techniques including round shapes, thatch roofs, and split bamboo walls that help keep interiors cool, and carved wooden idols on top (it’s considered good luck when the carving topples over). 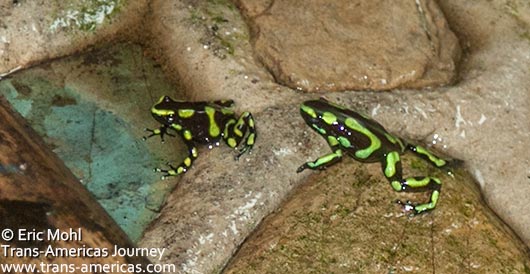 This pair of poison dart frogs lived in our shower at Filo de Tallo Lodge in the Darien Jungle. 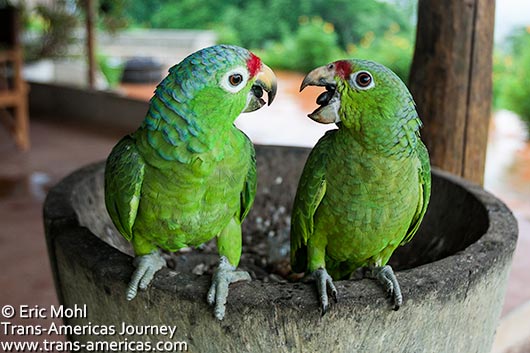 These parrots live at Filo de Tallo Lodge and they like to be gently scratched.

Interiors at Filo de Tallo Lodge are well-appointed with good beds, mosquito nets, and full-service bathrooms including gorgeous carved wood sinks. Bonus: we had a pair of poison dart frogs in our shower. Furnished private patios are the perfect place for nature watching and we saw hummingbirds, parrots, and toucans right from our patio.

The next day, shortly after daybreak, we were got back in a boat at Puerto Quimba for a trip up the Rio Iglesia through mangroves to the Gulf of San Miguel. 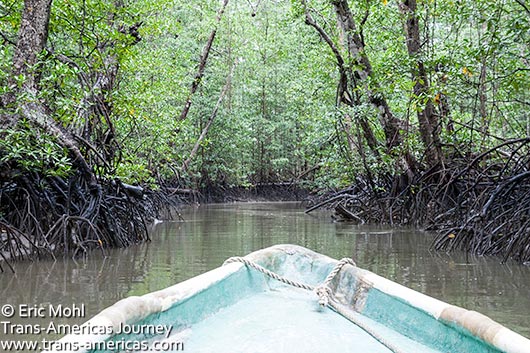 Floating through the mangroves along sections of the Rio Iglesia, one of the waterways through the Darien Jungle.

Along the way, we stopped on some surprisingly sandy beaches and bought some fish fresh off the fishing boat for dinner. We also visited what remains of two Spanish-built forts which have been utterly re-taken by the jungle before stopping in La Palma, the Darién’s complicated capital. 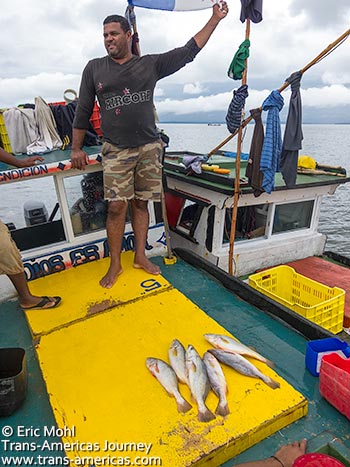 Fresh fish off this boat was turned into dinner in the Darien Jungle. 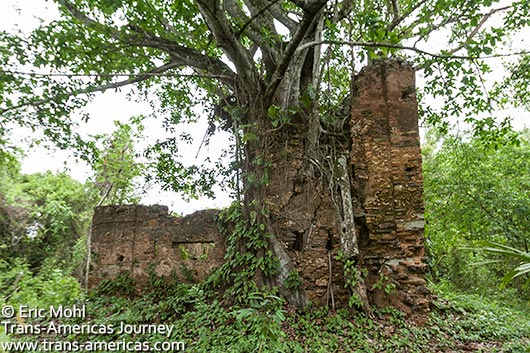 The Spanish built forts in the Darien Jungle, but the vegetation has long since reclaimed them.

With 4,300 inhabitants, La Palma is the most populous town in the region but that doesn’t mean it has more than one street which boasts a hospital, a police station plus a few hotels, bars, and restaurants. Oh, and an airstrip. Michel said that In the bad old days when Manuel Noriega was still in power, planes from Colombia landed here three times a week packed full of cash which Noriega then laundered in his banks. 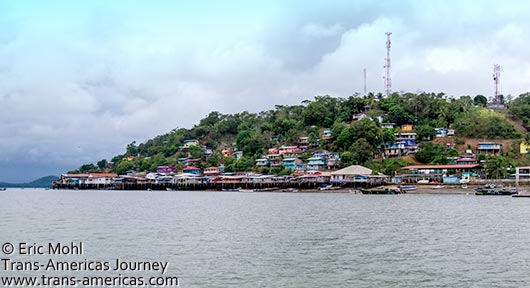 La Palma may be the capital of Darien Province but it’s not connected to the outside world by road and can only be reached on the water. 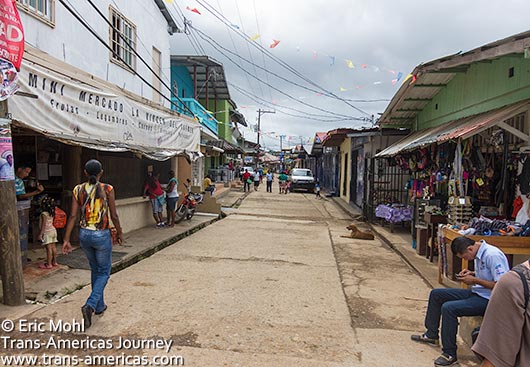 Meeting the Embera of the Darien

After another night in Filo del Tallo Lodge we drove a short distance to Puerto Limon where we got into another wooden canoe for a trip on Rio Chucunaque to a trailhead for more time hiking in the Darien Jungle. This was the most impressively virgin and dense jungle we’d seen yet and we spent four hours enjoying the silence and size of everything around us. 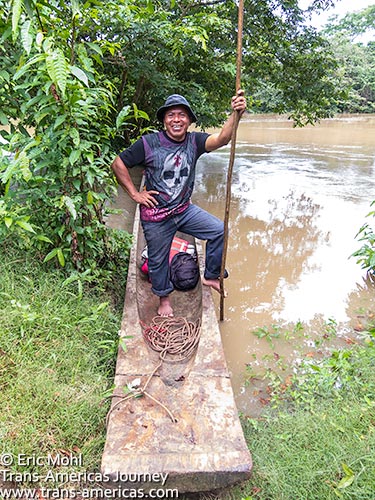 Our river guide on the Rio Chucunaque through the Darien Jungle.

Exhausted but exhilarated, we then visited the village of Alto Playona and met members of the Embera indigenous group before heading back to Puerto Limon and the lodge via the Rio Chucunaque. Howler monkeys serenaded us on our journey. 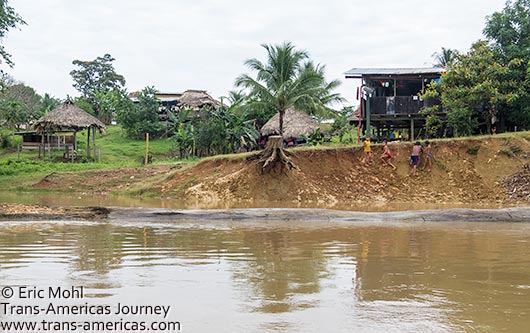 The Embera village of Alto Playona on the banks of the Rio Chucunaque in the Darien Jungle. 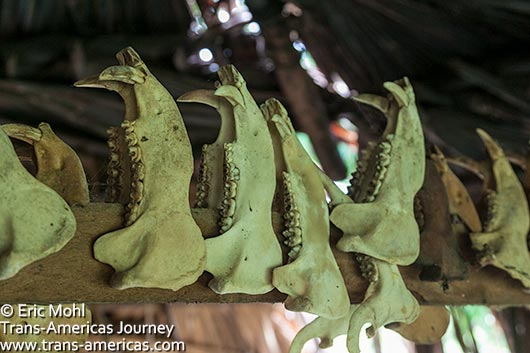 Peccary (wild pig) jaw bones in an Embera house in the Darien Jungle.

Our toughest (and most snake-filled) hike in the Darien

The following day brought our toughest hike in the Darien. Though it only took two hours, the uphill terrain and need for our guide to machete his way through thick jungle had us all working hard. 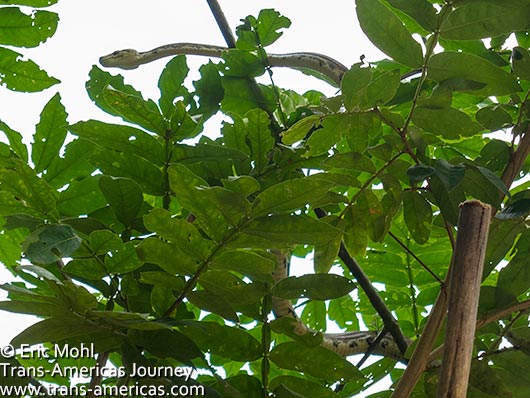 Cuipo trees, with their bulbous bellies, towered above us and strangler figs snaked their way up tree trunks. The thick vegetation made spotting animals difficult, though there was no mistaking a 6 foot (2 meter) boa constrictor in the canopy overhead. We also saw two small fer-de-lance, one of the deadliest snakes in the world, on the trail before bidding goodbye to the Darien. 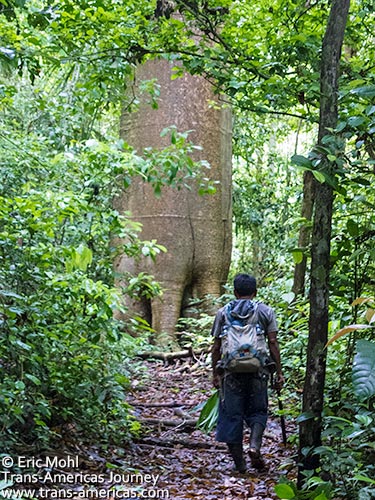 We were delighted to see so many enormous trees while we were hiking in the Darien Jungle.