As James Cameron and his team were celebrating the director-slash-explorer’s super sub descent to a mind-boggling 10,898 meters (35,756 feet) under the sea in the Mariana Trench, we were preparing for our own submarine adventure 300 feet down in the waters off Cocos Island National Park in Costa Rica. 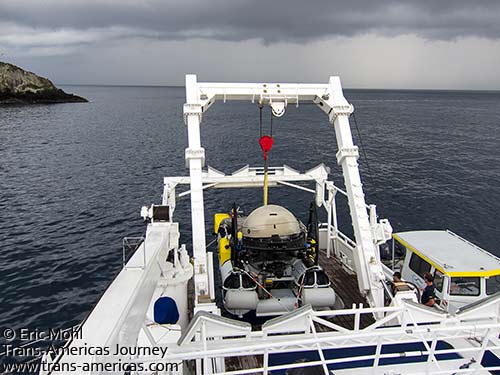 That domed creature in the bay of the M/V Argo live aboard dive boat is the DeepSee submersible.

We were visiting Cocos Island, a national park about 350 miles off the coast of Costa Rica, on Undersea Hunter’s live aboard dive boat, the Argo to go SCUBA diving with endangered scalloped hammerhead sharks (and many other types of sharks) which are reliably found in these waters in impressive numbers.

As if hanging out underwater with dozens of hammerheads (and rays and other sharks) wasn’t enough of a rush, we jumped at the chance to go even deeper in a custom built, multi-million dollar contraption called the DeepSee submerisible which travels on board the Argo. Think of it as the cornerstone in the ultimate adventure garage. 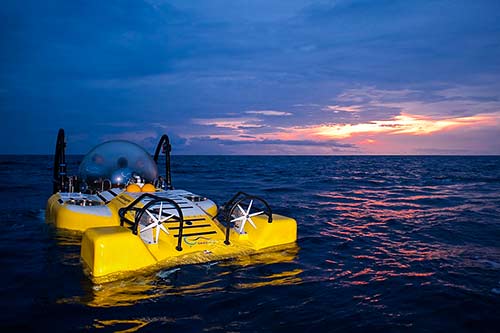 The DeepSee submersible only looks like a toy–it’s really a powerful scientific tool (and a lot of fun). Photo courtesy of the Undersea Hunter Group.

The DeepSee looks like a neon yellow, economy-car-sized Lego, but don’t be deceived. It’s actually a complex machine built to keep its occupants alive for hours underwater at depths that deliver bone-crushing pressure and deadly cold. Sign us up!

The DeepSee submarine is a pint-sized life support system

Before we could get into the DeepSee and go see what’s down there we had to sit through the obligatory pre-dive safety briefing which included what to do if the oxygen supply conked out (it’s never happened). There were also lots of warnings about what not to touch inside and outside the submersible which is chock full of controls and gauges for everything from monitoring interior CO2 levels to changing the descent rate. 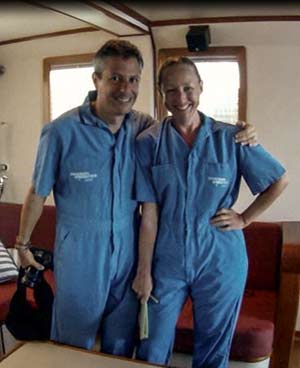 Us all jump-suited up and ready to take our first submersible ride all the way down to more than 300 feet.

After a quick weigh in (exact cargo weight is needed to properly operate the DeepSee) we each put on a pair of Dickies coveralls. Why? Because the zippers, buttons and buckles on normal clothing can damage the DeepSee cockpit which is nothing more than a 4 inch thick acrylic orb. 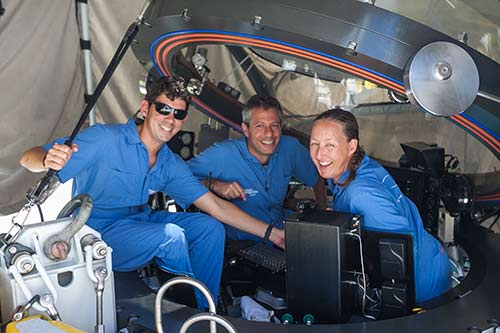 Us in the tiny cockpit of the DeepSee submersible with Philllpe, our pilot (far left).

We’re going 300 feet underwater in a craft that can’t handle a zipper?

The round, totally clear, pressurized cockpit of the sub carries only three people including the pilot. Once we’d successfully navigated the precise, Twister-like course we had to follow to reach our seats without touching any forbidden areas of the sub, the cockpit turned out to be more comfortable and far roomier than it looked from the outside, though claustrophobics may want to think twice. 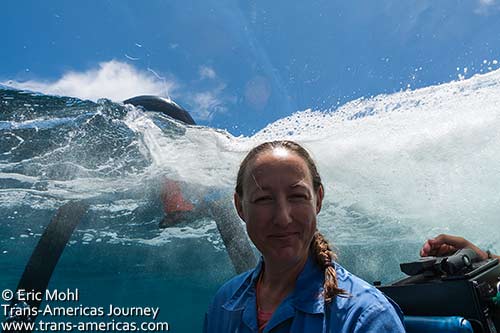 Karen says goodbye to the surface and hello to what’s below as the DeepSee submerges.

The sub was towed on the surface of the water behind a small boat (bring your sunglasses for this part) until we were directly over an underwater formation called the Everest Sea Mount, the base of which was the destination of our 300 foot / 90 meter) dive. Unhitched from the tow boat, the DeepSee gently tipped forward like a weeble in mid wobble as the air bladders that had been keeping us afloat were emptied. 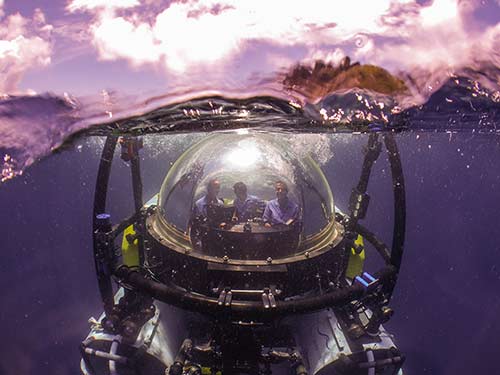 The DeepSee submersible breaking the surface of the ocean on its way down.

Then we slowly started to sink

We’ve each done hundreds of dives using traditional SCUBA gear. We’re comfortable under water and comfortable trusting equipment to keep us alive down there. But watching the water rise outside the totally clear orb of the DeepSee and not having a breathing apparatus in our mouths did feel a bit, well, wrong. However, once we were totally submerged (and still breathing) we were hooked. 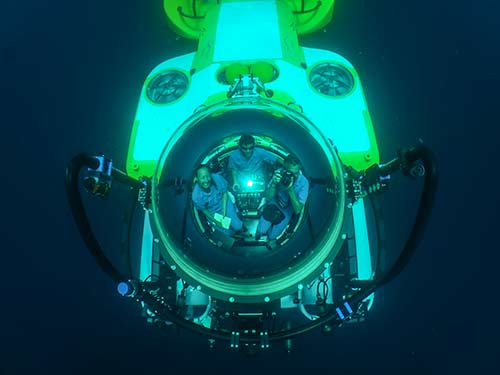 Us in the DeepSee submersible (Eric is taking pictures, of course).

The orb of the cockpit gives a 360 degree view and the acrylic virtually disappears underwater, making it seem as if there really is no barrier between you and those hammerheads doing lazy figure eights above the orb or the small school of oceanic trigger fish feasting on jellyfish to the right of you or the enormous spotted eagle ray flapping slowly by. 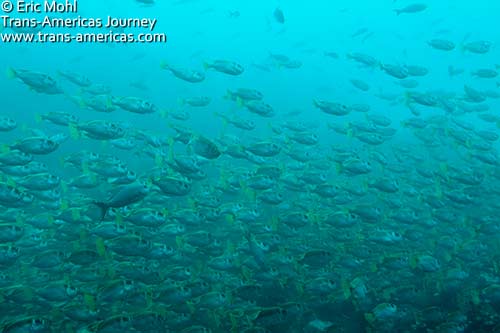 Schools of fish are attracted to the DeepSee submersible as a safe haven and we were often surrounded.

Unlike most SCUBA divers, the DeepSee doesn’t give off any startling bubbles or make any alarming, predator-like sudden movements so sea creatures are not afraid of the sub. In fact, the animals actually seemed curious about the slow-moving craft. Reef fish even hovered around the DeepSee as if it was part of their environment or at least a safe place to hang out. 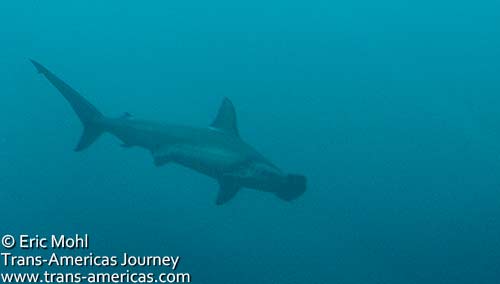 A hammerhead considers checking out the DeepSee then thinks better of it and darts off.

The mechanics of the DeepSee do create and electromagnetic field which both attracts and repels fish and sharks. The hammerheads, in particular, seemed ultra-sensitive to this energy field, swimming toward us then swerving off suddenly as if they’d just bumped nose-first into an electric fence. 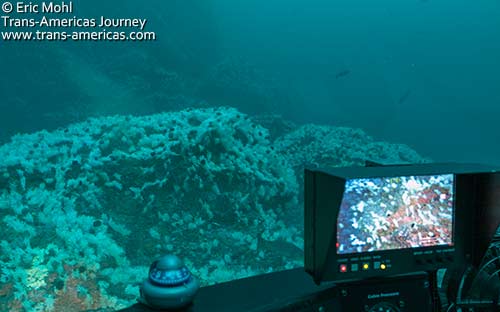 Part of the airplane-esque control panel of the DeepSee as our captain navigates around a coral-covered rock. 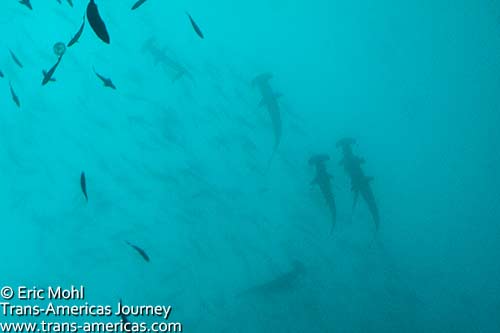 Hammerheads circling above the DeepSee submersible.

Check out this highlights reel of our journey down to more than 300 feet below the surface in the shark-filled waters off Cocos Island, Costa Rica.

We were so fascinated by the underwater show being put on before our very eyes and delighted to have joined the elite submariners club.

The deeper you go

A 1.5 hour DeepSee dive to 300 feet (90 meters) costs US$1,200. Yes, per person. If that price tag doesn’t scare you, I highly recommend going whole hog with a DeepSee dive to 1,000 feet (300 meters) which will cost you US$1,800 per person. However, this three hour dive takes you down to where the ocean really gets weird. Some of your adventure will even be spent in complete darkness except for the lights mounted on the outside of the DeepSee.

But you won’t be alone down there. A father and son who did a 1,000 foot / 300 meter submarine dive the day before our shallower trip on the DeepSee saw a rare prickly shark and an amazing completely transparent octopus—two creatures that only live way down deep. 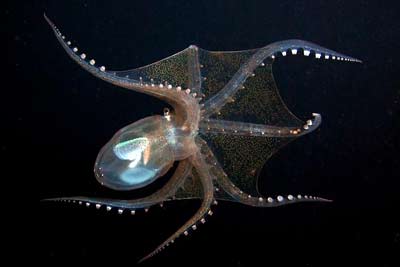 This transparent octopus was seen by some of our shipmates during a DeepSee dive down to 1,000 feet where the really weird stuff starts to appear. Photo courtesy of the Undersea hunter Group

The DeepSee isn’t just a cool underwater toy. It’s also a powerful scientific tool. Every DeepSee dive is filmed and the footage is shared with marine biologists at the University of Costa Rica and leading oceanographers and scientists, including National Geographic Explorer in Residence Dr. Sylvia Earle, use the craft too. 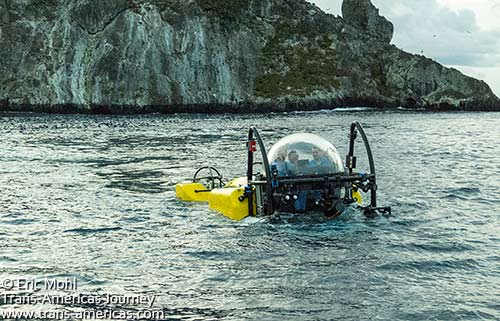 We are officially submariners as we return to the surface after an awesome DeepSee submersible adventure.

Bring your widest camera lens to make the most of photography from inside the orb.