Forget what you think you know about cigars. Drew Estate is redefining the art of cigar making and marketing, as we found out when we traveled to the town of Estelí and took the hippest cigar factory tour in Nicaragua. 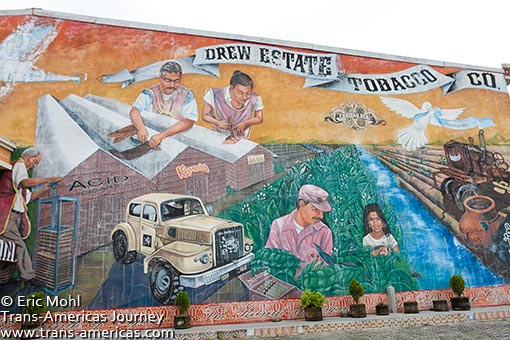 This 50 foot (15 meter) tall mural is just one of the many pieces of cool original art at the Drew Estate Cigar Co. factory in Estelí, Nicaragua.

The rebirth of cigars

That’s the slogan of Drew Estate and the personal goal of its co-founder Johnathan Drew, a 43-year-old guy from New York City who was selling cigars in a tiny kiosk in the World Trade Center in downtown Manhattan while dreaming of bigger things. Using cool art, irreverent names, inventive, modern cigars, and high quality they’re aiming for a new breed of cigar aficionados. In 1998 Johnathan and his partners started Drew Estate Cigar Co. and began making some of the most unorthodox and successful cigars in the world from a massive factory in Estelí. 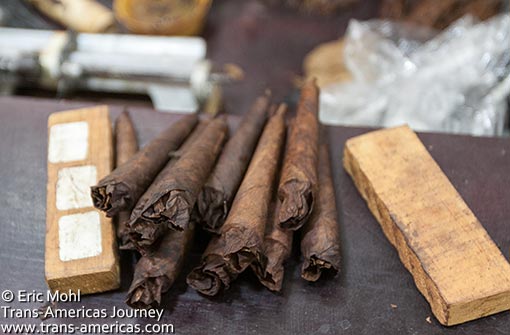 Cigars in the making at Drew Estate Cigar Co. in Estelí, Nicaragua.

Inside the coolest cigar factory in Nicaragua

We’ve toured cigar factories before, including the Plasencia cigar factory and the Flor de Copán cigar factory, both in Honduras. That’s how we know Drew Estate is really doing something different. While the other cigar factories in Estelí and around the world are busy doing things the old-fashioned way, Drew Estate took a left turn at traditional and decided to go their own way. 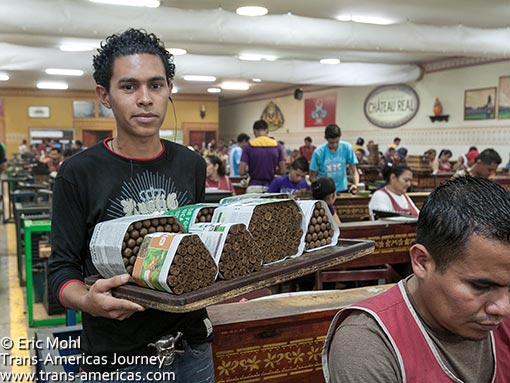 One of the young workers at the Drew Estate Cigar Co. factory in Estelí, Nicaragua with a tray of finished cigars.

We spent hours gawking at the range of cigars (they even make square ones), learning about tobacco curing and cigar rolling, and probably getting some sort of nicotine contact high in the process. 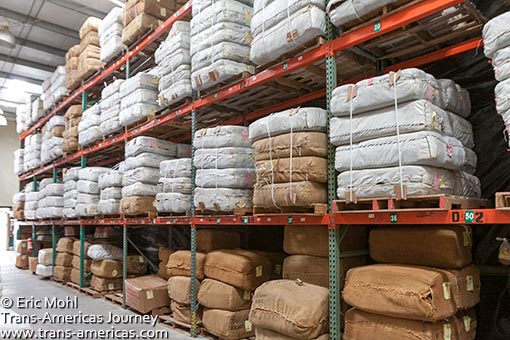 Part of our tour of the Drew Estate Cigar Co. facility in Estelí, Nicaragua included a peak into their massive tobacco warehouse where the best leaves from around the world are carefully stored before being turned into millions of cigars.

It’s not just the music and the art work that makes Drew Estate different. We learned that at Drew Estate they don’t call their cigars puros, as many other regional makers do, since they aren’t made with tobacco from a single source. Instead, Drew Estate blends tobacco from around the world, sort of like how a winemaker would blend grapes from different regions to come up with the desired flavor and aroma.

Also, unlike most other cigar makers, Drew Estate doesn’t rely on a machine to measure the “draw” of each cigar. That’s checked primarily by weight.

The only area we weren’t allowed to see during the Drew Estate factory tour was the on-site graphic art studio, called the Subculture Studio, where staff artists were busy cooking up new top secret marketing materials. 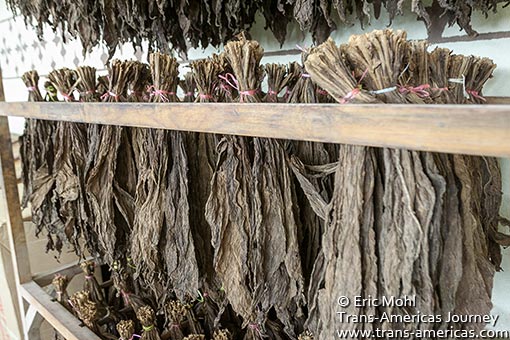 Taking the cigar world by storm

Though there were some lean years, today Drew Estate makes millions of dollars and millions of cigars with names like My Uzi Weighs a Ton (an uzi is an official measurement in the world of cigars). And then there’s Acid.

Named for the artist Scott “Acid” Chester (that’s him on the motorcycle in the Acid logo) this is one of Drew Estate’s top sellers. Cigar purists call Acid a “flavored” cigar but Drew prefers the term “infused” since the tobacco used in Acid cigars is steeped in a secret blend of flavors.

Drew Estate’s Liga cigar is not flavored or infused and even the purists love it. It was scored as high as 89 points by Cigar Aficionado magazine. 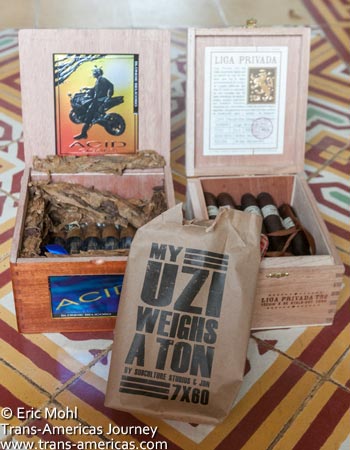 A selection of Drew Estate cigars with distinctive names including Acid, Liga Privada and My Uzi Weighs a Ton.

Here are some more of our favorite shots from the Drew Estate Cigar Co. factory in Estelí and don’t miss the aficionados-only info at the end of this post. 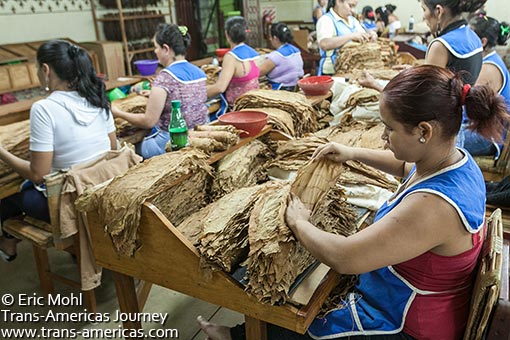 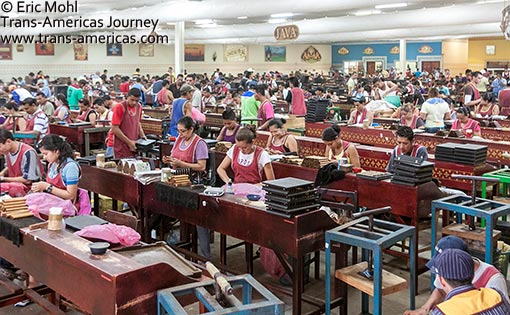 Unlike other cigar factories we’ve toured, the work rooms at Drew Estate were airy, well-lit and even had rock music piped in. 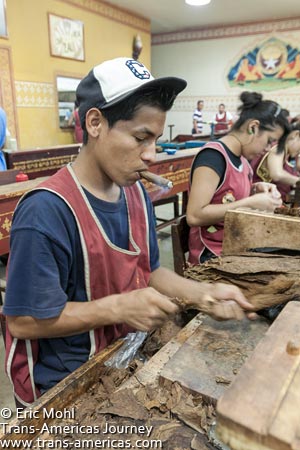 Rollin’ and smokin’ at the Drew Estate cigar factory in Estelí, Nicaragua. 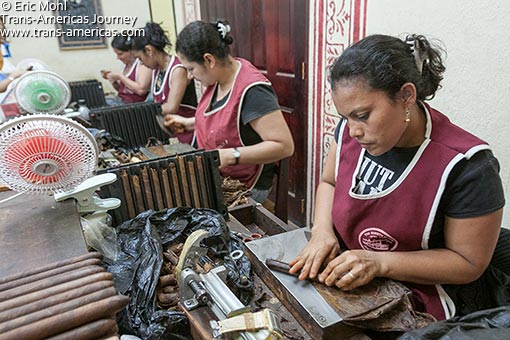 Many believe that women make the best cigar rollers. 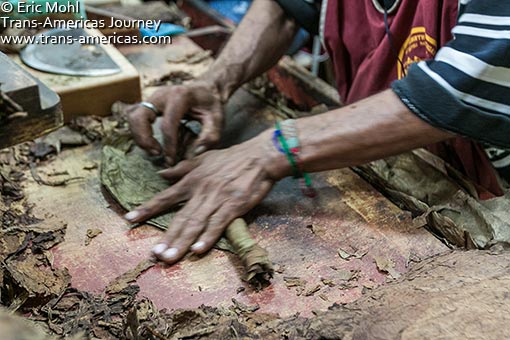 This guy could probably do this in his sleep. 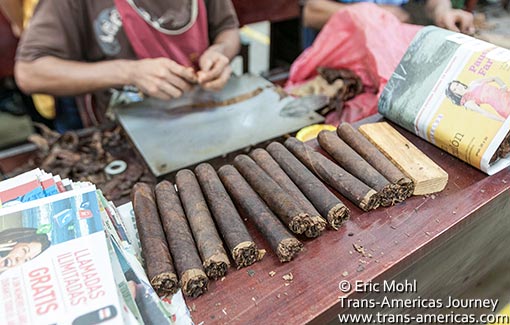 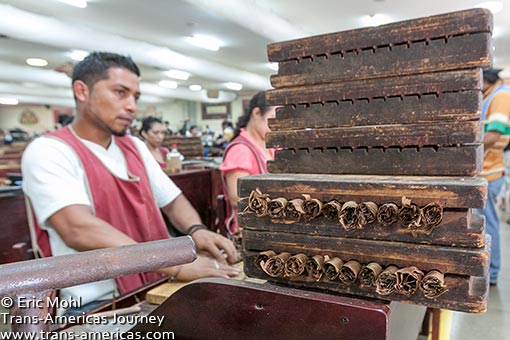 This wooden box helps ensure every cigar is well-packed so it has a good “draw” when you smoke it. Unlike other cigar makers, Drew Estate does not use a machine to measure the draw of each cigar. 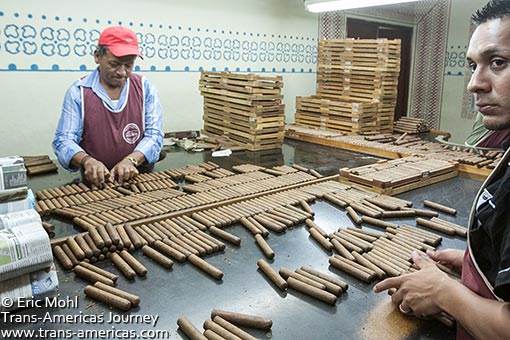 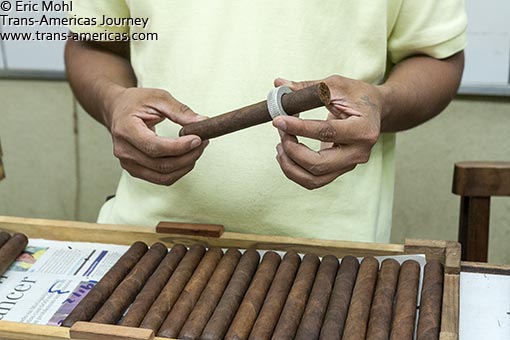 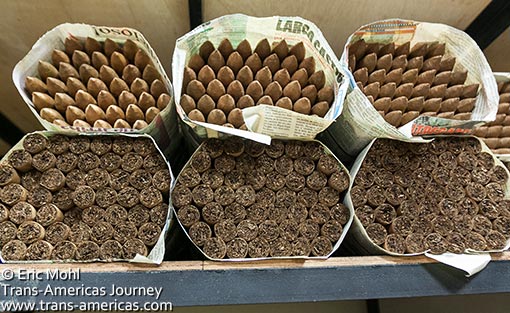 Finished cigars in all shapes and sizes at the Drew Estate cigar factory in Nicaragua. 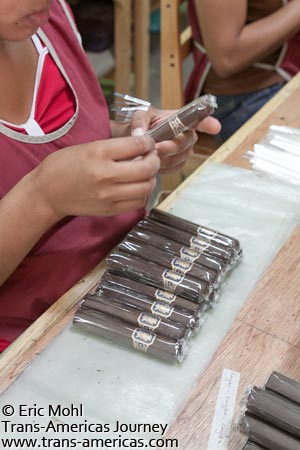 Fancy labels and protective packaging are added before Drew Estate cigars are ready to be shipped around the world. 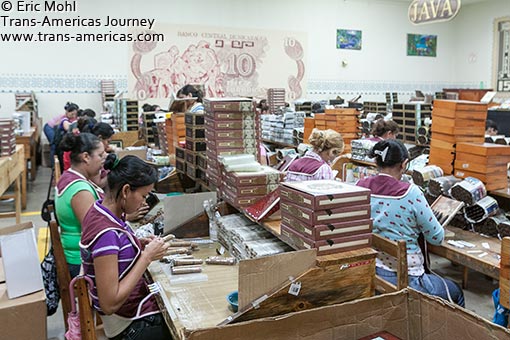 Fancy labels and packaging are added before Drew Estate cigars are ready to be shipped around the world. 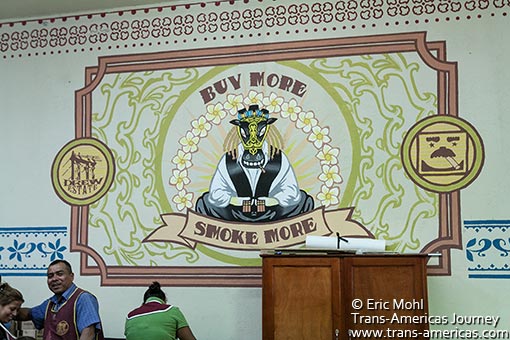 The unique art of Drew Estate Cigar Co. is created by in-house artists who put a modern twist on traditional cigar box motifs.

Want to really get into the cool, cool world of Drew Estate cigars? Sign up for their four-day Cigar Safari guided tour of parts of Nicaragua and, of course, the factory which includes accommodation in the very hip and plush house next to the factory. There’s a swimming pool, decks with epic views, a poker table, full staff and, of course, all the cigars you can smoke. Just don’t hold your breath: the Drew Estate Cigar Safari is already sold out for 2014.

Estelí doesn’t see a lot of tourists and hotel options in town are a bit slim. We were hard pressed to find decent budget accommodation with parking. There’s a budget hostel but they don’t have parking, there’s an over-priced seen-better-days hotel with a parking lot that just felt like a rip off and then there’s Hotel Los Arcos. Rooms start at US$45 but they’re big, clean and include breakfast and there’s a secure parking lot.