Epic Drives: The BR-319 Across the Amazon from Manaus to Porto Velho in Brazil

Deep mud. Giant potholes. Rickety wooden bridges. And all in the middle of nowhere. The BR-319, which connects Porto Vehlo to Manaus in the Amazon in northern Brazil, is one of the most epic drives in the world. While technically a numbered highway, the BR-319 is known as 540 miles (870 km) of travel torture (or driving adventure, depending on your POV). But recently, some of the most hazardous aspects of the road have been improved. Has the BR-319 lost its bite? 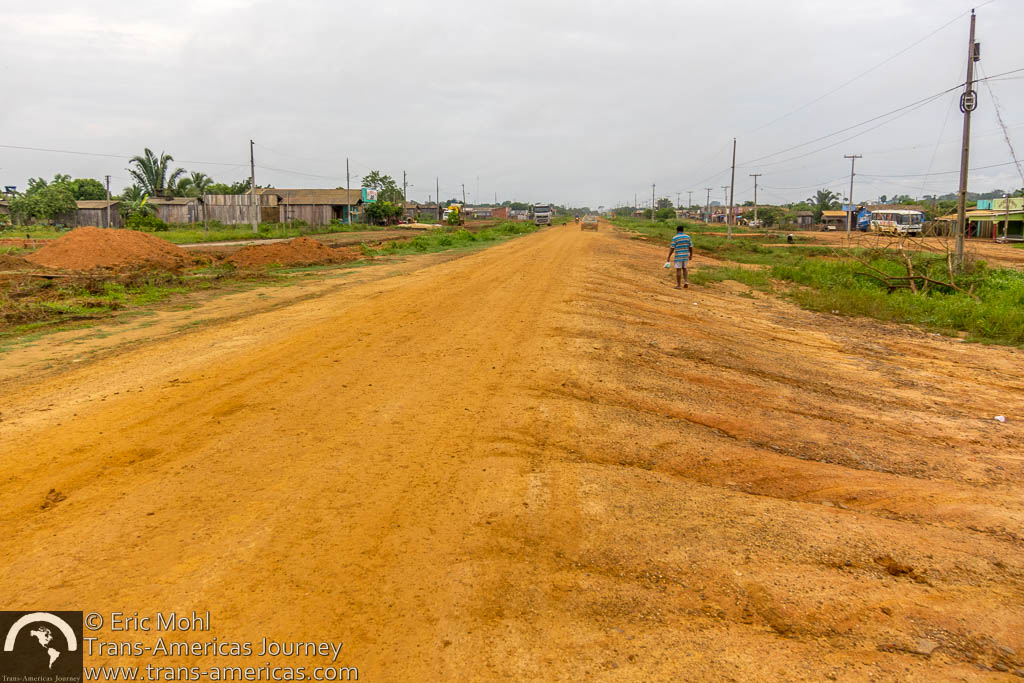 A smooth section of the BR-319, an infamous road linking the Amazonian city of Manaus with the rest of Brazil.

The BR-319 was built in by the Brazilian military in 1973 and inaugurated in 1976  to link Manaus to the rest of Brazil. However, it was never paved and almost instant neglect meant that extreme weather and persistent jungle vegetation quickly did their worst. In the rainy season the road is often an impassable mess of deep clay pools. Then there are the 40-year-old wooden bridges–rickety,  narrow and best navigated with extreme care and very, very good karma.

A quick search on YouTube offers many entertaining glimpses of the considerable challenges on this infamous highway across the Amazon. Even the two million people living in Manaus don’t really consider their city in the middle of the Amazon jungle to be truly connected to the rest of the country by road. They prefer to fly.

Improvements to the BR-319

Reluctant to beat up our truck on the BR-319 by driving  this torture test round trip, we left our truck in Porto Velho and flew to Manaus. When we got to the city we heard about new regular bus service along the BR-319 from Manaus to Porto Velho (and vice versa), so that’s how we made our return trip. We figured if full-size buses can do the road then the worst sections and barely passable bridges must have been improved. 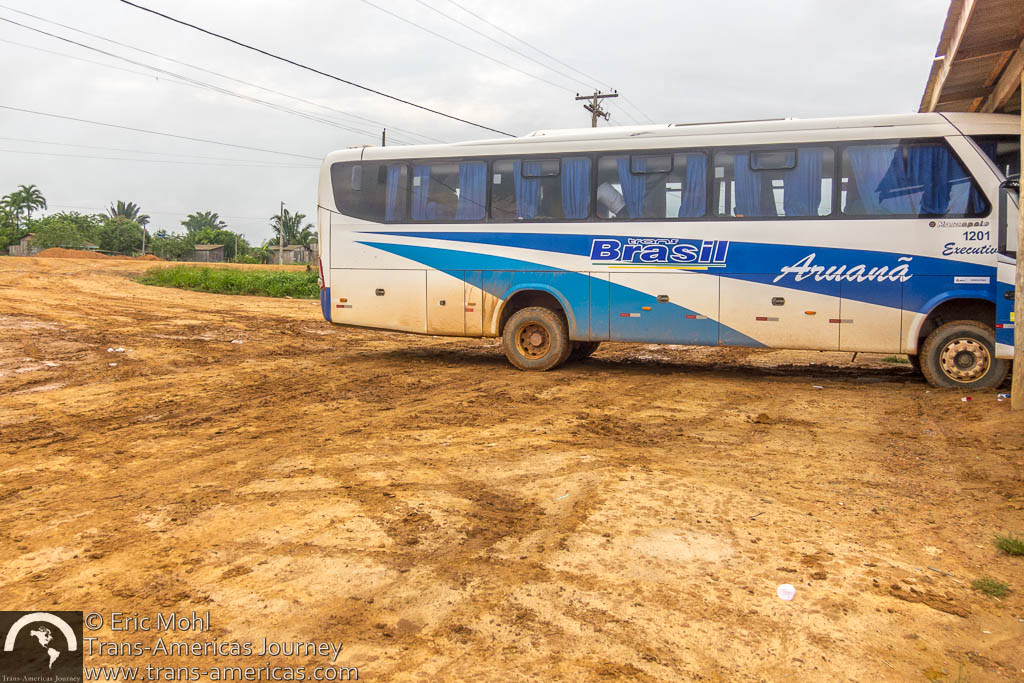 She may not look like much to you, but this “executive” bus was actually pretty plush and far more comfortable and new than we expected on the BR-319.

Sure, the road is still rough, and bumpy, and mostly made of potholes, and likely a total mess in the rain and the ferry you have to take over a small river inspires something less than confidence, and the bridges are still made out of wood but, overall, the road was nowhere near as bad as we’d been lead to believe. 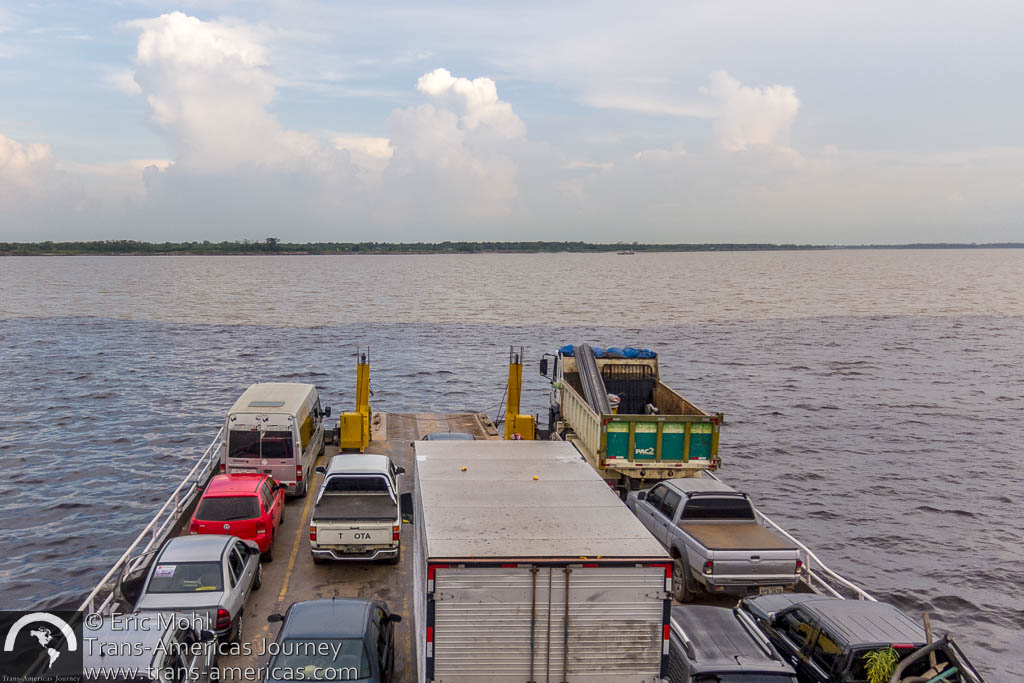 The bus journey over the infamous BR-319 road out of Manaus begins with a ferry ride over the Amazon River. In front of us is the famous “meeting of the waters” where the dark water of the Rio Negro and the milky-looking water of the Rio Solimões meet but don’t mingle for miles.

The most dramatic moments of the journey happen right out of Manaus when passengers get off the bus and onto a ferry, followed by the empty bus, to cross the Amazon River. The BR-319 is paved (poorly) for about an hour out of Manaus then it’s all dirt (and one short DIY looking ferry) until a couple of hours before reaching Porto Velho when crappy pavement resumes. All of the bad bridges seem to have been fixed up to accommodate full-size buses and we even saw a grader. With no rain in sight, our one-way journey was a relative breeze at just 22 hours.

There’s been talk about improving and paving the entire BR-319 for years. After talking to locals in Manaus, it’s our belief that that will never happen. It’s generally understood that powerful shipping interests in Manaus will never stand for an improvement in the road since that would bite into their profitable monopoly on moving goods to and from Manaus. The city is a free-trade-zone and home to hundreds of factories which means there’s big money in moving goods which now happens exclusively by river. Environmentalists also prefer that the road stay rough to keep the area wild.

So, for now, at least in the dry season, the BR-319 can be taken off the list of the world’s most infamous roads. 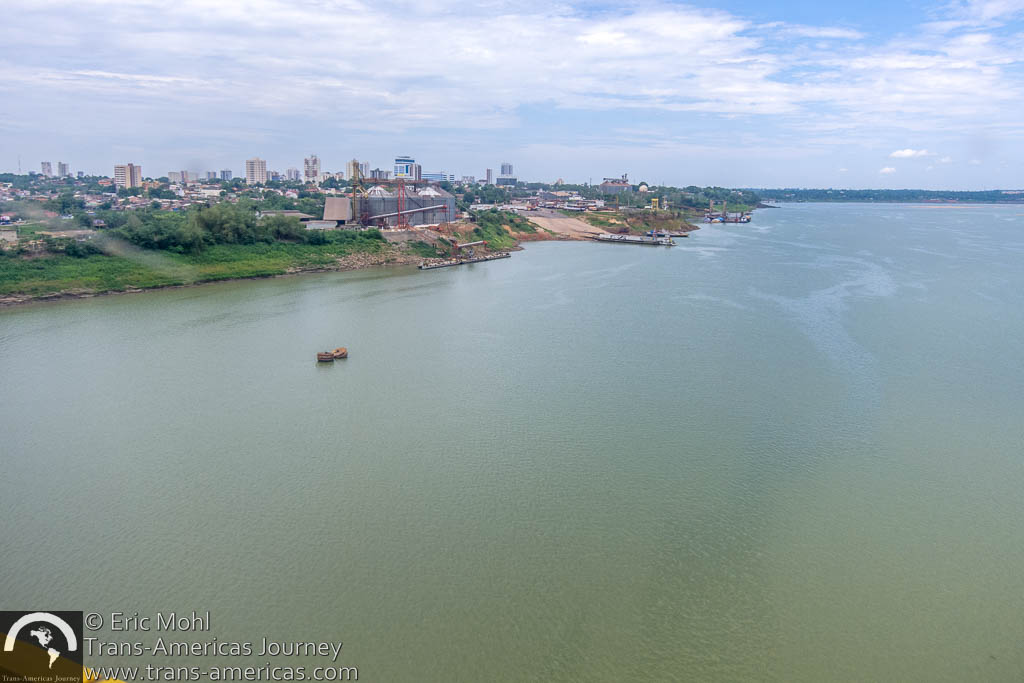 Arriving in Porto Velho on the Madiera River after 22 hours on a bus driving the infamous B-R319 road from Manaus.

Multiple bus companies send buses over the BR-319 between Manaus and Porto Velho daily. We booked with the Aruana bus company and paid R/229 each (about US$72). We got a ticket with a reserved seat. You will need to show your passport when booking and again when boarding.

The buses have a toilet at the back so sitting as close to the front of the bus is advised. The toilets get nasty by the end of the journey. Some buses also supply water on board, but don’t count on it.

Our bus had inside storage space overhead that was similar to that found on small airplanes (ie, not very big). The main luggage area under our bus was lined with a grippy material to reduce bouncing and sliding. We were also given big plastic bags to put our luggage in to keep the dust off.  We got a claim ticket for each of our bags and the luggage compartment was locked.

We stopped a few times during the journey for quick (mediocre and cheap) food and (basic and dirty) bathroom breaks. Overall, the bus was comfortable and reasonably clean, though the A/C was VERY cold. Bring layers.

Sadly, this journey is done mostly in the dark which means passengers don’t get much opportunity to see the pristine jungle or look for wildlife. 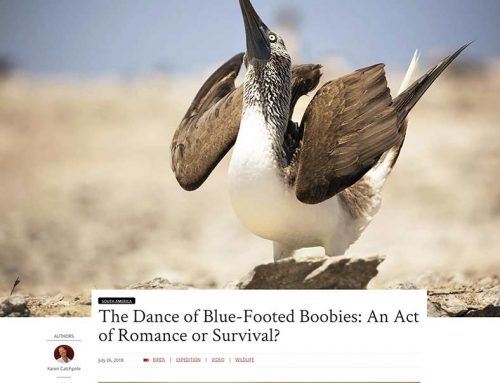 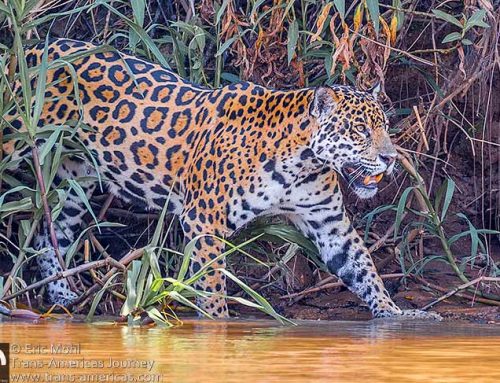 Photo Essay: Wild Animals of the Pantanal in Brazil 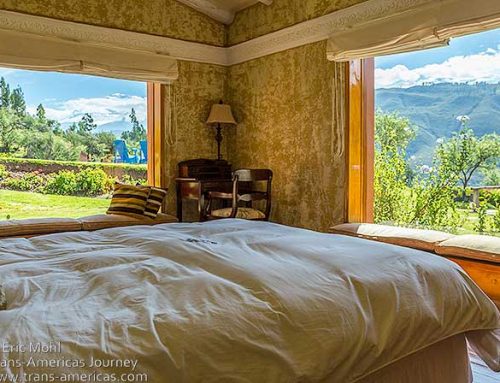 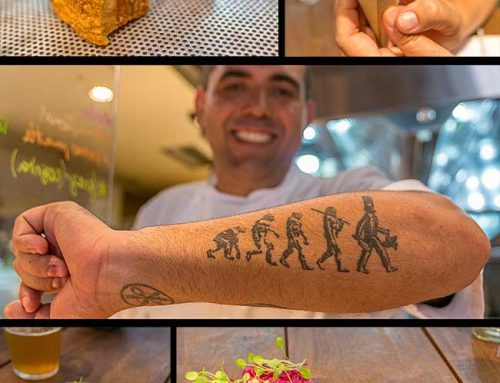 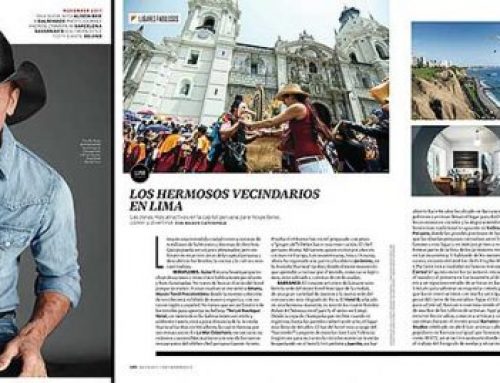 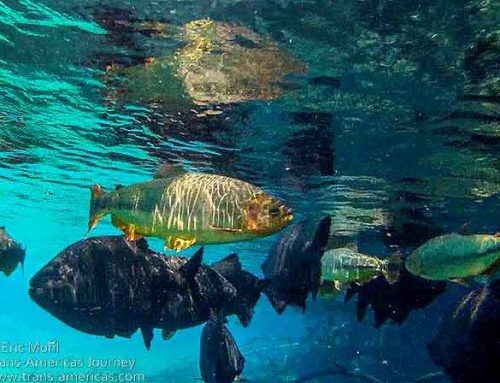 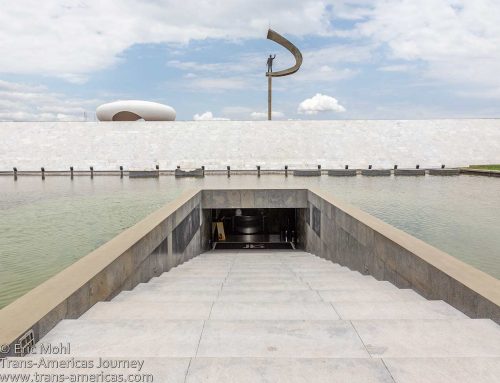 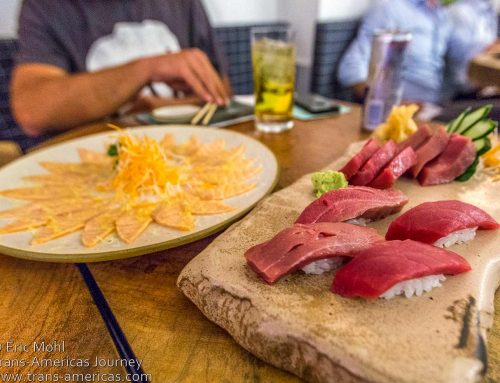 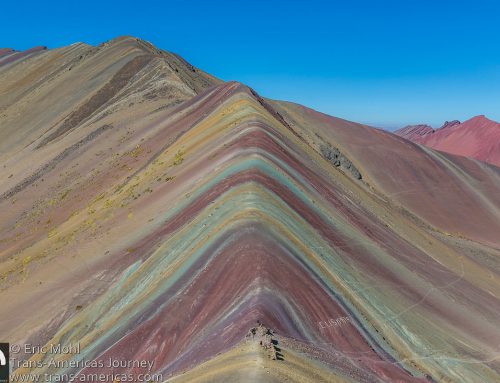 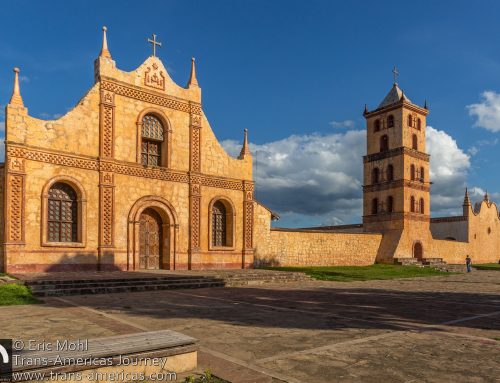 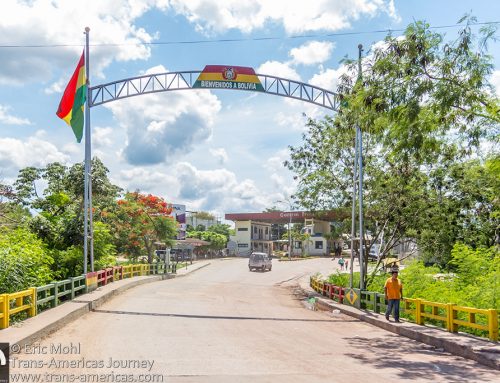 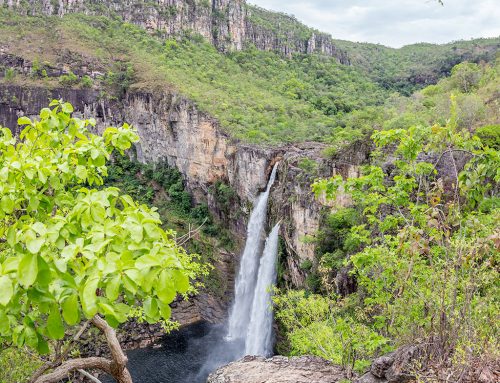 Where We’ve Been: November 2016 Road Trip Driving Route in Brazil 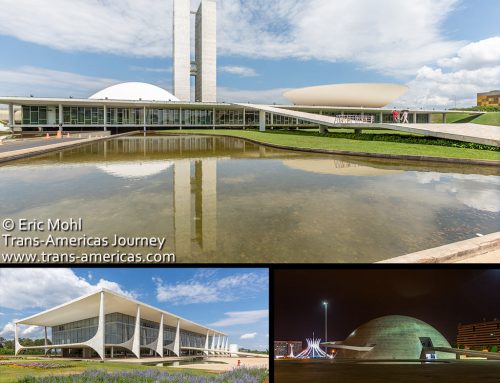 Where We’ve Been: October 2016 Road Trip Driving Route in Brazil