We love SCUBA diving and we’ve managed to do a lot of it, racking up almost 400 dives between the two of us in some of the best dive destinations in the world, but we’d never been on a liveaboard dive boat until we boarded the Aggressor III for a week of intensive diving and topside fun in Belize. 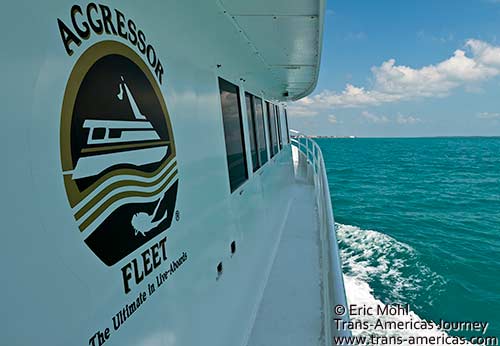 The Aggressor III, our home and dive base for a week in Belize.

Live aboard life in Belize

It’s fitting that we had our first (but hopefully not last) live aboard experience with The Aggressor Fleet which has been taking small groups of divers out for multi-day, all-inclusive, full-service, intensively-dive-focused trips since 1984. The fleet currently has 10 ships serving 11 of the world’s best dive destinations including the Cocos Islands in Costa Rica and the Galapagos Islands in Ecuador.

Aggressor is, admittedly, a terrible name unless you’re a pirate. But that’s what their fleet is called and who are we to argue? The company’s live aboard in Belize is called the Aggressor III and it was our home for a week of wonderful SCUBA diving. 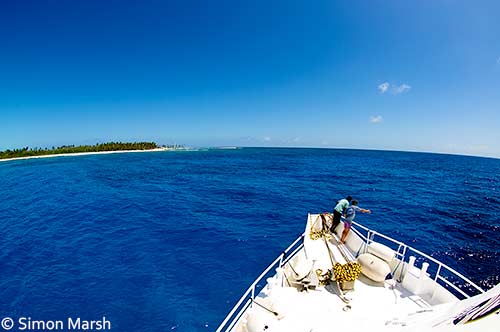 We were welcomed aboard the Aggressor III by Captain Simon Marsh and his first mate (literally and figuratively) Andrina. They’ve both been diving for years and have both worked on other boats in the Aggressor fleet. We were in good hands. 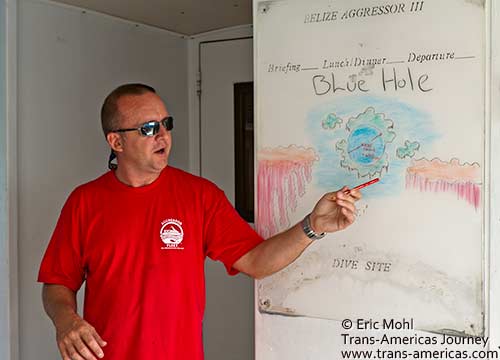 Captain Simon Marsh with a map of Belize’s famous Blue Hole dive site as he briefs us on board the Aggressor III live aboard dive boat. 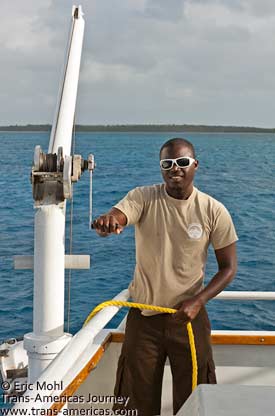 Dive master Jordy hoisting the ship’s dingy, on board the Aggressor III live aboard dive boat in Belize.

As the ship set sail we took a quick tour of our home for the week and found nine smartly-laid-out cabins (for up to 18 guests total) with A/C and televisions (for playing DVDs), ingenious storage/stowage areas, and private bathrooms. The communal living room was cozy and had plenty of plugs for laptops and for charging cameras and batteries.

Upstairs on the top deck, a small wet bar even had a tap of local Belikin beer (though smart ship rules mean that once you have a drink you become a snorkeler for the day). Sadly, the top deck hot tub was out of commission. 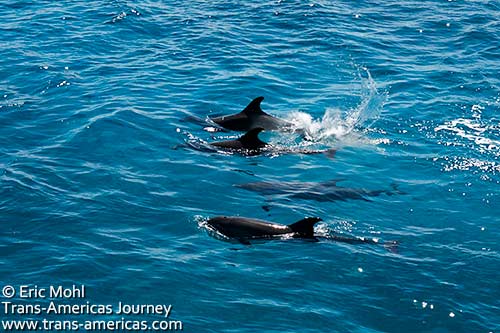 One afternoon a pod of dolphins came to play around the boat, but by the time we got our snorkeling gear on and jumped in they were gone.

It was all kept spotlessly clean and neat by Randy who, when he wasn’t serving us delicious snacks or making sure our dinner plates were heaped high, was either polishing something, plumping pillows, or ironing and folding napkins into amazing shapes. We wish him luck with his pizzeria in the town of Orange Walk. We can guarantee that it will be clean!

While the focus of the eight passengers on board was diving, part of the liveaboard life occurs on the surface and, sometimes, even on dry land. You’ve got to let your body expel accumulated nitrogen (commonly called “out gassing”) above the water anyway, so you might as well have fun. Plus, it’s was much easier for Captain Simon to whistle  “Hello” when he didn’t have a regulator in his mouth. The Lionel Richie’s hit quickly became the silly theme song of our sailing. “Hello. Is it sharks you’re looking for?” 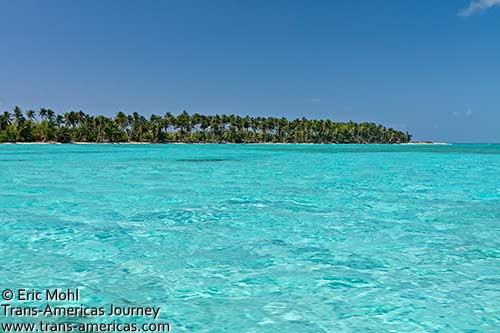 Part of the Half Moon Caye Natural Monument as seen from the Aggressor III.

We spent one afternoon at the Half Moon Caye Natural Monument, a protected island that’s home to a thriving population of red-footed boobies and many of them had fluffy, demanding chicks when we were there. 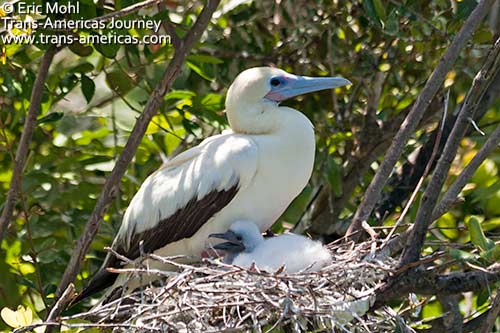 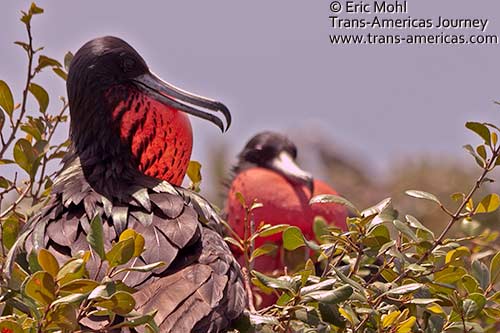 The island is also a great place to have a picnic, especially with the talented Yanis, the chef from the Aggressor III kitchen, is on hand to handle the grill. 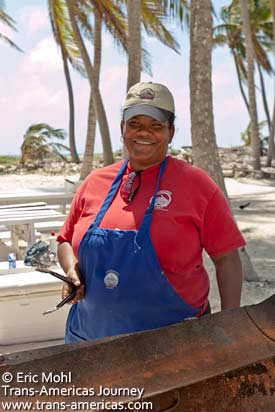 Yanis, the chef from the Aggressor III kitchen, takes her skills outside for a BBQ lunch during a shore excursion to Half Moon Cay Natural Monument. 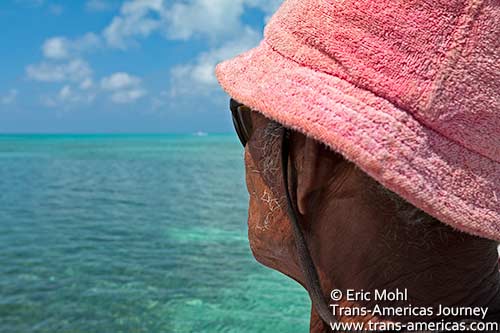 The imposing Aggressor III is too big to dock at Half Moon Cay Natural Monument, so a local boatman ferried us from  our floating home to shore. 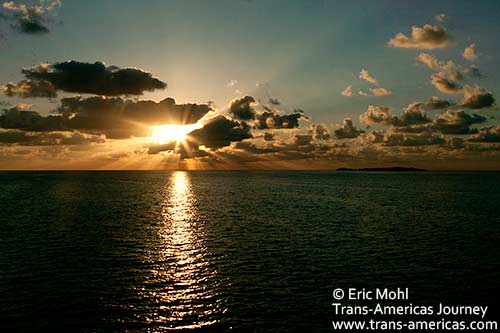 Just one of many beautiful Belize sunsets that we saw while living on the Aggressor III.

See what life on a live aboard dive boat is like under water.