Durango doesn’t have the restaurant or museums of Mexico City. Or the rodeo culture of Lagos de Moreno. Or the tequila of Tequila or the beach resorts of the Costalegre.  But it does have John Wayne, a road called The Devil’s Backbone, and some travel bargains. It’s all in our Durango travel guide. 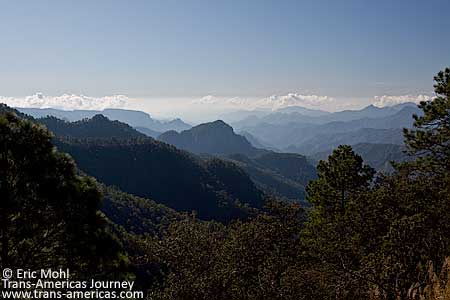 Views from The Devil’s Backbone, aka Highway 40, into Durango, Mexico.

Driving the The Devil’s Backbone to Durango, Mexico

The drive from Mazatlan to Durango on Highway 40 is one of the more spectacular drives in Mexico. One section that crosses the heart of the Sierra Madre is called El Espinoza del Diablo, or the The Devil’s Backbone because it is so narrow and winding. Locals sometimes call it ElCamino de Tres Mil Curvas or The Road of 3,000 Curves. You get the picture.

The 180 miles (300 km) from Mazatlan to Durango is so winding that it takes six to seven hours to make the trip, depending on how courageous you are at passing slower moving traffic. But it’s also a spectacular drive as you climb and turn through the Sierra Madre Occidental. The two lane road is narrow and hogged up by a steady stream of 18-wheelers whose drivers demonstrate wildly varying levels of skill and consideration for other vehicles. Many turns are simply too tight to accommodate big trucks and buses. 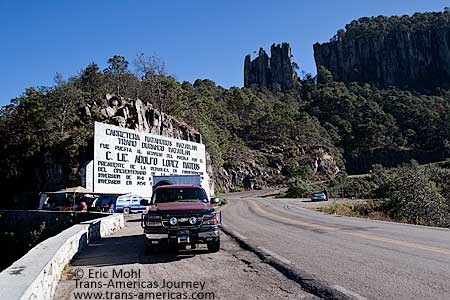 One of the few places to stop along the section of road called the The Devil’s Backbone.

A multi-billion dollar road works project was going on to create an alternate high speed and undoubtedly high-toll route that involves a lot of high-tech engineering including 26 tunnels and 14 bridges in just one 29 mile section. One of the bridges, the Baluarte Bridge (El Puente Baluarte), will be nearly 3,700 feet long making it the biggest cable-stay bridge in Latin America. The new road, set to be done in 2012, will have fewer turns and drop 75 miles (including the The Devil’s Backbone section) out of the route. This should cut the total trip time from six hours to around three hours and all but erasing the white-knuckle factor.

What to do in Durango, Mexico

Durango has a relaxed vibe and some pretty architecture which makes wandering around a pleasure. 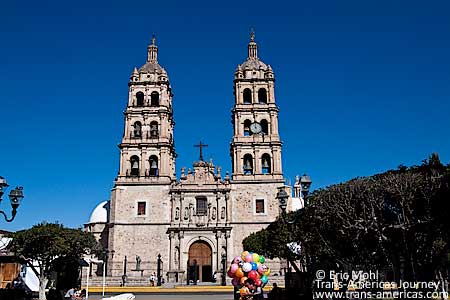 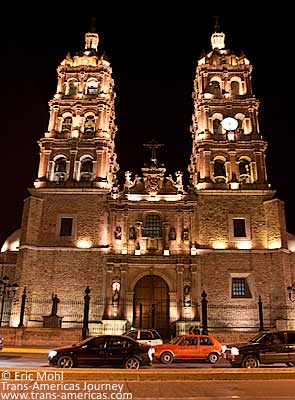 But the most unique aspect of Durango is its golden history as the place where many beloved movies were filmed over the course of the past 100 or so years. There’s even a Museo de Cine (Cinema Museum) in town.

For obvious geographical reasons, many of those movies were westerns. John Wayne was here so often he eventually bought a local ranch which was ultimately turned into a movie set.

The western main street (saloon, post office, jail, etc) that served as the set for many famous western movies is now an attraction called Paseo del Villa Oeste (30 pesos, about US$1.60, per person including bus transportation from downtown). The show here is a blessedly tongue-in-cheek “re-enactment” of western scenes played out on the dusty main street. There’s plenty of beer, snacks, and food. It’s cheesy, but also strangely enjoyable and we were really glad we went. 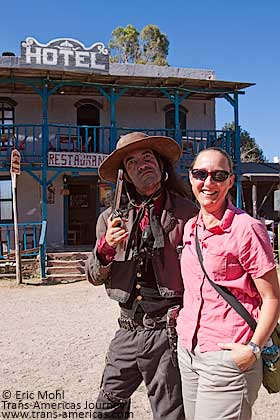 At Villa de Oeste Karen was nearly taken hostage by a crazed gunman.

An unexpected bonus of our stay in Durango was a convergence of marching bands of all ages which were in town for something called the Concurso de Bandas de Guerra which we’ve lamely translated as “Contest of War Bands.” One evening we stumbled across a kind of battle of the war bands in Plaza IV Centenario and when the participants began to solemnly unfurl the Mexican flag and play and sing the national anthem we suddenly realize we’d never actually heard it before. 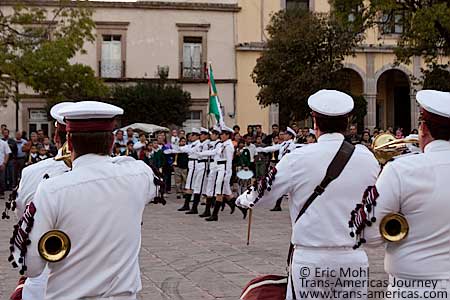 It’s lovely and heartfelt and mournful and long–like everyone’s national anthem. What is unusual is that any Mexican who’s been in the military sings the anthem while saluting at their foreheads. Those who have never served salute at the level of their hearts.

Unfortunately, at least one of the bands was staying at our hotel and the teenage  members felt the need to use the echoing hallways as playgrounds from 2 am to 4 am. One thing you learn in Mexico: noise does not bother people the same way it does in the US and if you complain about noise you’re likely to be met with a puzzled look. We certainly were. 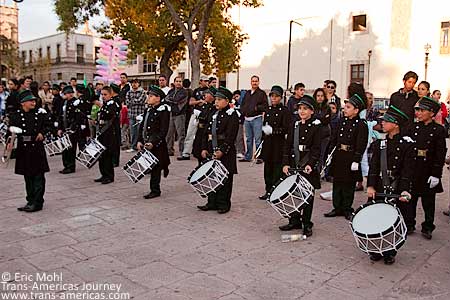 Durango was filled with the sound of drum when we were there thanks to a battle of the bands in the streets.

Where to eat in Durango, Mexico

At Cremeria Wallender our minds were boggled by its luscious similarities–from the freshly roasted coffee to the freshly baked bread and pastries to the gourmet cuts of meat to the decadent prepared foods to the hard-to-find ingredients–to Dean & Deluca, the gourmet mecca in New York City. 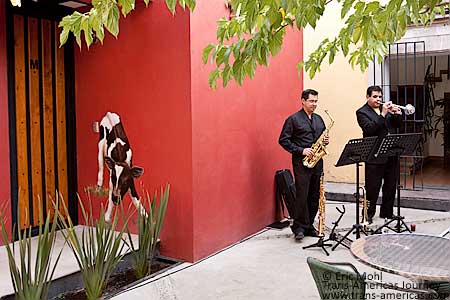 It’s not the biggest food bargain in Durango, but it’s a lovely shop and cafe especially with the owner passing out free glasses of sangria, apparently inaugurating a beautiful new outdoor patio complete with  a jazz duo.

Dinner at Corleone Pizza is a food bargain. Not only is the pizza and pasta perfectly respectable, but the prices were unbeatable (a 16″ pizza is 90 pesos or about US$5) which explains the crush of young couples on dates and new families on a budget that fill the place and form lines out the door (come early).

Where to sleep in Durango, Mexico

Next we checked into the Hotel Durango where we found free parking, a big clean room with an even bigger outdoor patio and all the mod-cons all for 240 pesos (about US$13) with Wi-Fi. Honestly, this room is one of the biggest city hotel bargains we’ve encountered in Mexico so far.