Many people say we’re crazy when they hear that we’re spending years driving through the Americas on our little road trip. However, our Trans-Americas Journey often takes us to places where crazy (in a good way) is truly defined, like Las Pozas (The Pools) outside a tiny town called Xilitla, Mexico. 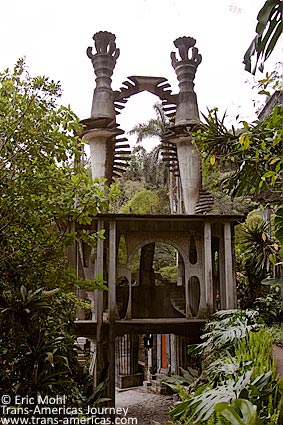 One of the first things you see at Las Pozas, Edward James’ jungle garden in Mexico, is this aptly named structure: Stairway to the Sky.

Exploring the crazytechture of Las Pozas

Created by English aristocrat (he was rumored to be the grandson of King Edward VII) and art-lover (he is said to have bankrolled Dalí and Magritte) Edward James between 1949 and 1984, the concrete buildings, sculptures and spaces have been called surrealistic, magical, fantastical, a folly, and, yes, crazy. 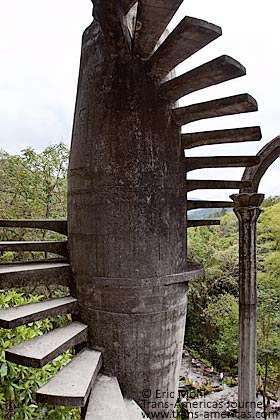 Just another stairway to nowhere in the concrete other-world created in Mexico by eccentric Edward James.

Started more than 60 years ago, Las Pozas eventually sprawled to cover 80 acres (32 hectares) with almost 40 different structures. It is ramshackle and free of guard rails and feels wonderfully unfinished. There is also a touch of darkness to the place and not just because most of the paint has long since peeled off. 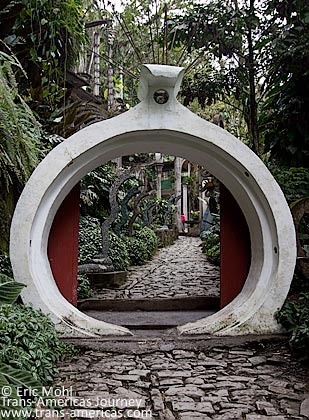 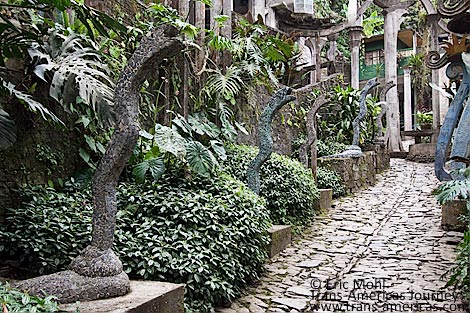 Much of the inspiration for the creations at Las Pozas came from the jungle itself. 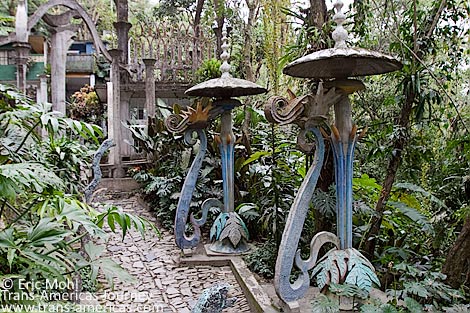 Much of the inspiration for the creations at Las Pozas came from the jungle itself.

The uncertain future of Las Pozas

James died in 1984 and there’s no denying that his creation has fallen into disrepair and it’s a real shame that they don’ t seem to be renting out the handful of guest rooms on the site, for example, and restoring some of the original color to the place would be exciting. Cemex, Mexico’s cement company, is now the owner of Las Pozas and is rumored to be bankrolling some maintenance on the place. We hope they don’t fix it up too much though. It seems fitting that Las Pozas is being slowly engulfed by the jungle that inspired it.

We’re going to let the photos tell the rest of the story since words (including crazy) don’t do this place justice. 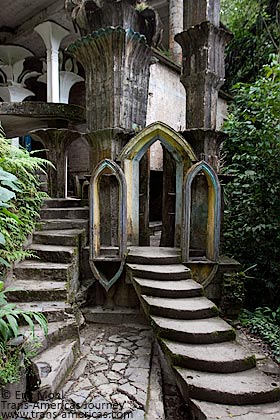 Organic shapes and geometric shapes mingle freely. The place used to also be brightly painted–some color remains on these arches. 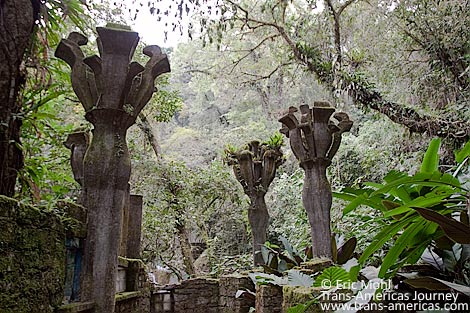 Much of the inspiration for the creations came from the jungle itself. 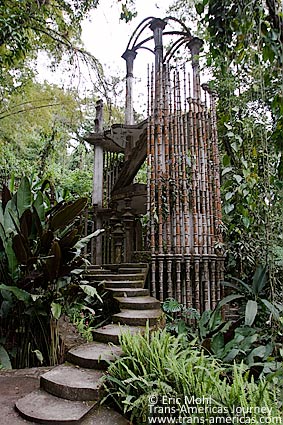 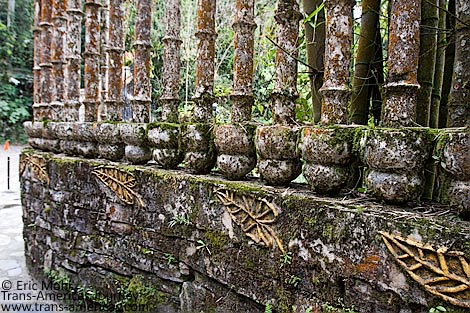 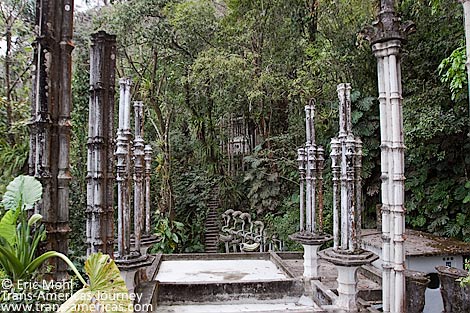 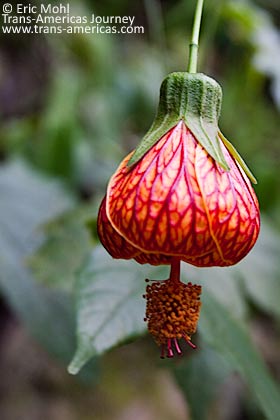 This flower, designed by Mother Nature, seems even more surrealistic in Las Pozas. 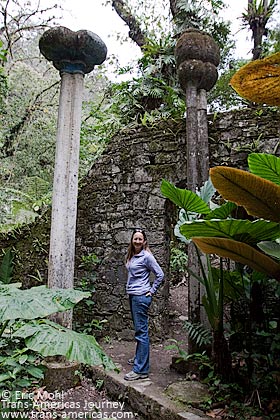 Karen getting into the crazy at Las Pozas. 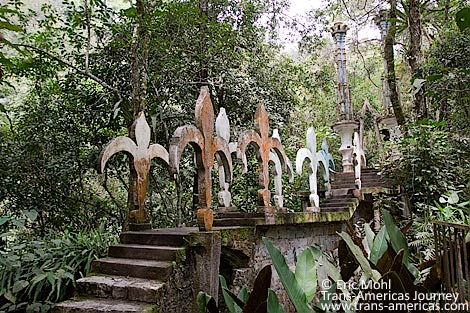 Yes, those are giant fleur-de-lis. 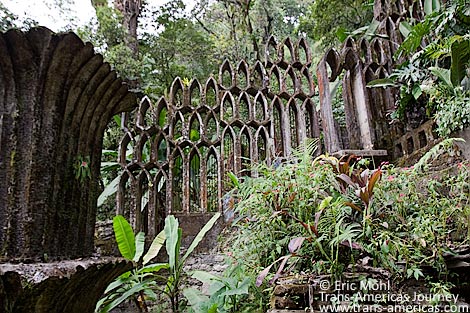 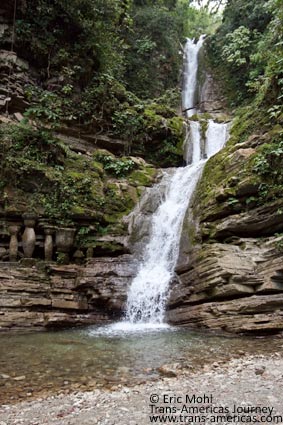 The natural centerpiece of Edward James’ off-kilter Las Pozas is a gorgeous waterfall which has been built up into a series of descending swimming pools. 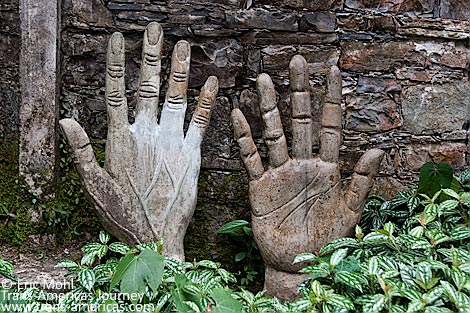 Perhaps the most “normal” thing at Las Pozas are these reminders that the place was built with the hands of two men: Edward James and his Mexican cohort, Plutcaro Gastelum. 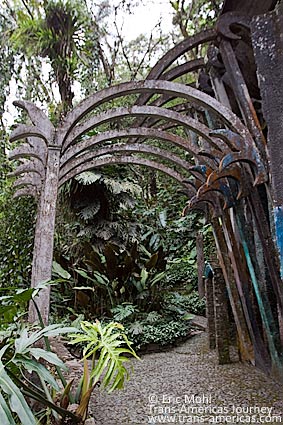