Not all Mayan archaeological sites are the same. The experts have deemed the Edzná, Tabasqueño, Hochob, and Dzibilnocac sites in Mexico to be part of a distinct style called Chenes. Who are we to argue. 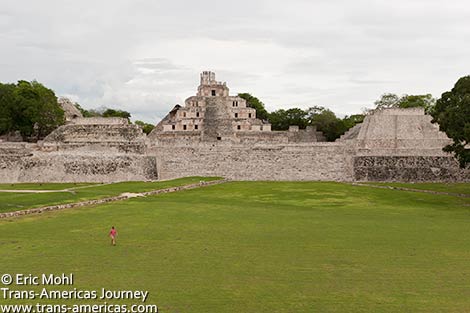 Karen exploring part of the Mayan city of Edzná which once covered more than 10 square miles and included more than 200 elaborate buildings.

The Mayan city of Edzná, which died a mysterious death following a prolonged period of prosperity and progress, is a remarkable example of late Chenes-style Mayan architecture and ingenuity. The city was inhabited into the 15th century and what remains of it includes multi-tiered buildings, elaborate roof structures called roof combs, elegant columns, and even an irrigation system of canals and reservoirs. 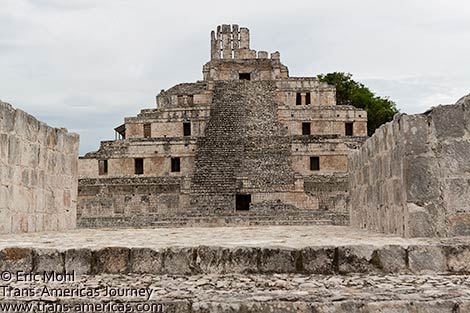 The elaborate five-story design of the Edificio de los Cinco Pisos at the Edzná archaeological site in Campeche state. 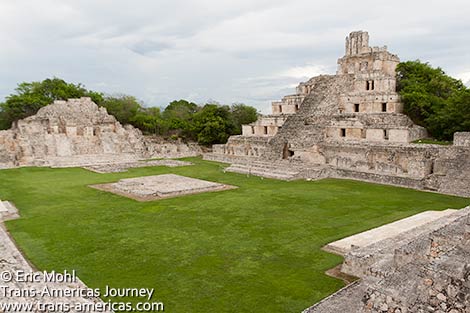 One of the plazas at the ancient Mayan city of Edzná. That’s the Edificio de los Cinco Pisos (five-story building) in the background.

What left the most vivid impression on us, however, after strolling around what’s been excavated of the city that once occupied more than 10 square miles and included more than 200 structures, was Edzná’s art. Particularly remarkable is a collection of various large stone carvings including a depiction of the Mayan sun god and a human/jaguar hybrid. Many of the carvings housed in the Temple of the Masks still carry hints of their original colors. 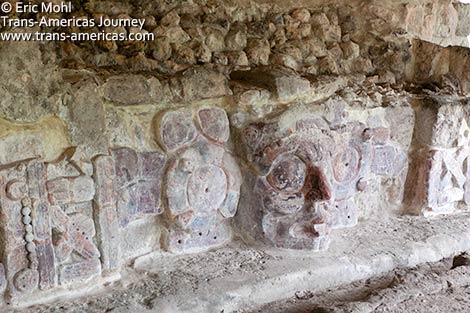 Wonderfully carved stone faces are so well preserved in the Templo de las Mascaras (Temple of the Masks) at the ancient Mayan city of Edzná that you can even see hints of color. 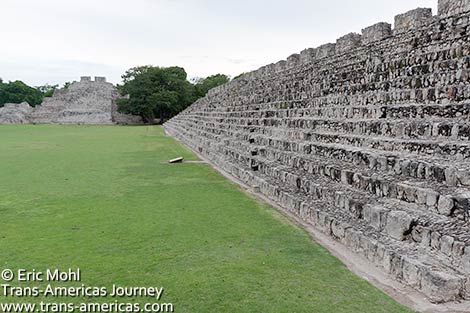 Part of what’s left of the once-powerful Mayan city of Edzná.

We learned a valuable lesson at Tabasqueño, another Chenes-style Mayan site in the region: you don’t always get what you pay for. Unlike most other Mayan sites, Tabasqueno is free, probably because it requires a drive of a mile or so up a decent dirt road off the main paved road (assuming you see the small sign at the turnoff) in order to reach it.

Our effort paid off with one of the most charming Mayan sites we’ve seen in Mexico (and we’ve seen dozens). It’s not that Tabasqueño is the biggest (there are really only two structures to explore) or the best (Tabasqueño’s so-called  Monster Mouth door is good but not amazing). There’s just a serenity and satisfying beauty at this petite site and that’s thanks to one man. 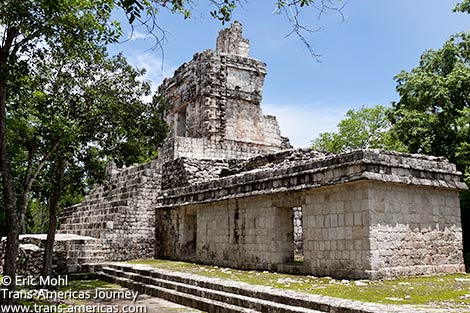 One lone caretaker looks after the Tabasqueño archaeological site with a contagious amount of devotion.

Tabasqueño is maintained by a lone caretaker who cares for the petite plazas and structures as if they were his own. He even rakes and grooms the thick moss that blankets the ground between the buildings until it flourishes like a lawn. Tabasqueño isn’t even mentioned in our Lonely Planet and with so many sites in the region, it seems to be considered of secondary interest. However, it was a highlight of the region for us, outshining many of the pay sites.

Maybe it was because we went straight to Hochob after falling in love with Tabasqueño, but the site, interestingly built on a mound that the ancient inhabitants flattened out on top, failed to wow us. Somehow the site’s Monster Mouth doorway paled in comparison to Tabasqueño’s. Though we appreciated the site’s clean composting toilets. 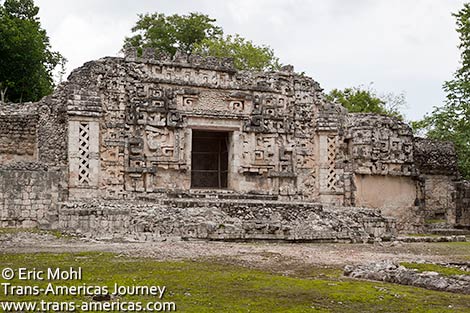 Archaeologists believe that the ancient Mayan inhabitants of Hochob flattened and leveled the hilltop they built their ancient city on.

Occupied until 1100 ad, the visible structures at this site are few though the surrounding intriguingly unexcavated mounds are good for the imagination. 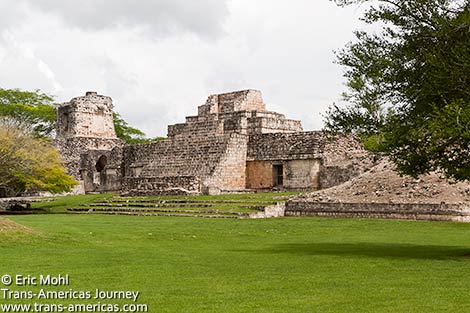 One of the excavated areas of the Dzibilnocac archaeological site where the many unearthed mounds are even more interesting. 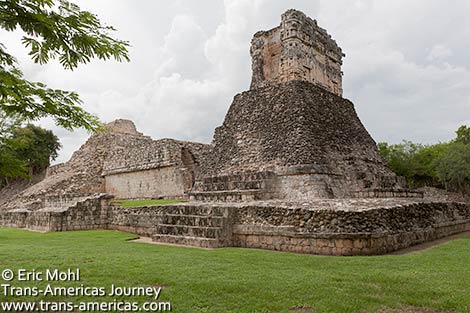 One of the excavated areas of the Dzibilnocac archaeological site in Campehe, Mexico where the many unearthed mounds are even more interesting.