A Matriarch Among the Moche – El Brujo Archaeological Complex, Peru

The El Brujo Archaeological Complex in northern Peru gives travelers a fascinating glimpse of Moche culture including a recently-discovered (and very unusual) female leader called the Lady of Cao, well-preserved decorative paint, and one of the best archaeological museums in Peru.

The El Brujo Archaeological Complex (Complejo Arqueologico la Huaca el Brujo in Spanish), about 37 miles (60 km) from the city of Trujillo, includes three distinct areas. The structures here were created by the Moche Indigenous group that thrived until about 700 AD (10 soles or about US$2.60 including entry to the excellent museum). 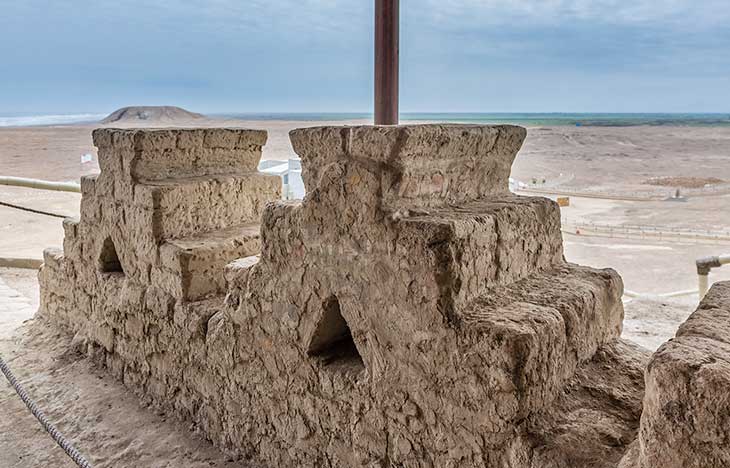 The site was named brujo (which means sorcerer in Spanish) because shamans used to perform rituals here. The Moche believed the area has special energy and locals still believe it. When we were at the El Brujo Archaeological Complex we were told that it’s still possible to book shaman ceremonies at the site. A modern yoga and meditation area is now also part of the complex.

The archaeological areas of the complex include Huaca Prieta, Huaca El Brujo, and Huaca Cao Viejo. The word huaca was used by pre-Incan civilizations to mean a monument that represents something revered. In areas outside of the Andes, huacas are often pyramid-type structures that were built up and enlarged over the years. Today, these huacas typically look like a natural mound or small hill until they are excavated.

You can see why Huaca el Brujo is also called Huaca Cortado, or the Cut Monument.

The Huaca Prieta, which dates back to 12,000 BC, is the oldest huaca in the El Brujo Archaeological Complex. It’s located on the coast and this area may have been used as a garbage dump based on trash, dating back thousands of years, that archaeologists unearthed there. There’s not much for non-archaeologists to see in the Huaca Prieta area, but there are good views of the ocean. 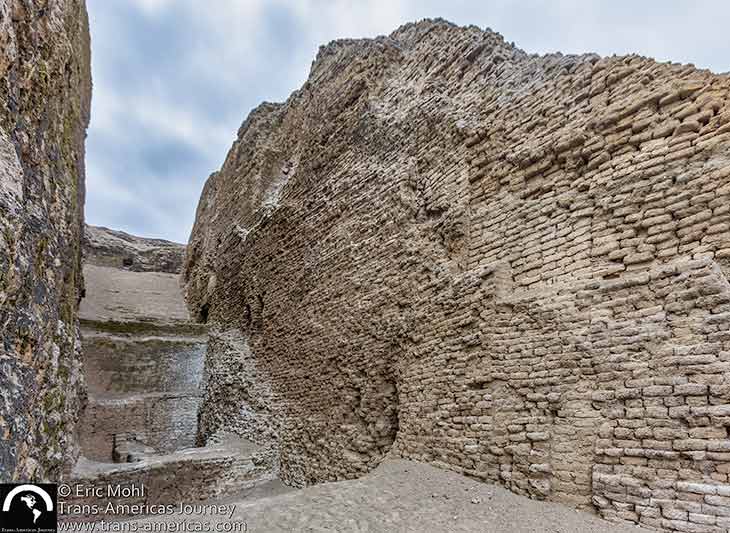 The 147 foot (45 meter) long cut through the center of Huaca el Brujo reveals how the mud-brick pyramid was enlarged in various layers through the years.

The main element at the Huaca El Brujo area is a pyramid that dates to between 100 and 700 AD. Though it’s mostly unexcavated, treasure-hunting looters made a 147 foot (45 meter) long cut through the center of the pyramid which gives an unusual perspective into the structure and explains this area’s other name: Huaca Cortada or Cut Monument. 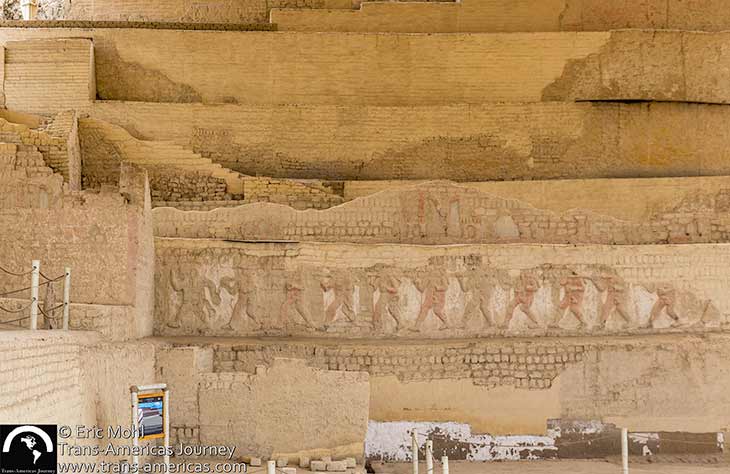 This frieze in Huaca Cao Viejo depicts slaves or prisoners.

Huaca Cao Viejo is the largest and most spectacular area of the complex with fabulous frescoes and reliefs, some of which still have visible original color.

Huaca Cao Viejo was constructed in various phases between 100 AD and 700 AD and the main section includes a 88 foot (27 meter) high pyramid. 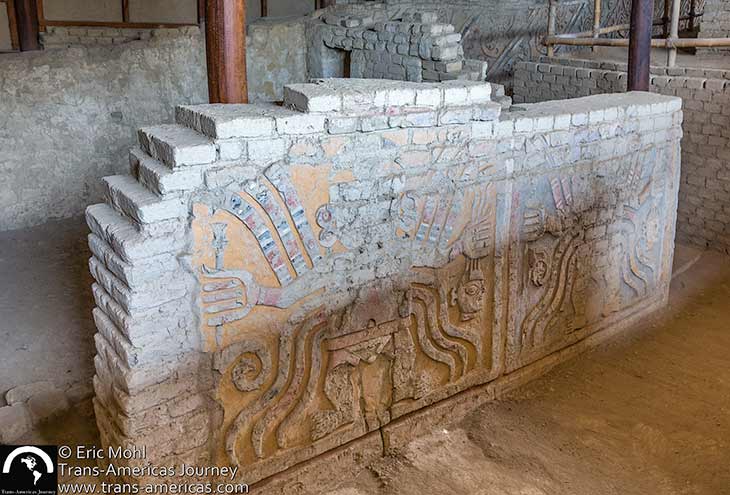 A frieze of the Decapitator God with original pigment in Huaca Cao Viejo at the El Brujo Archaeological Complex in Peru.

The Huaca Cao Viejo pyramid itself is impressive, but the decoration on the structure is just as amazing including multicolored reliefs of life-sized warriors, prisoners, priests, and human sacrifices. 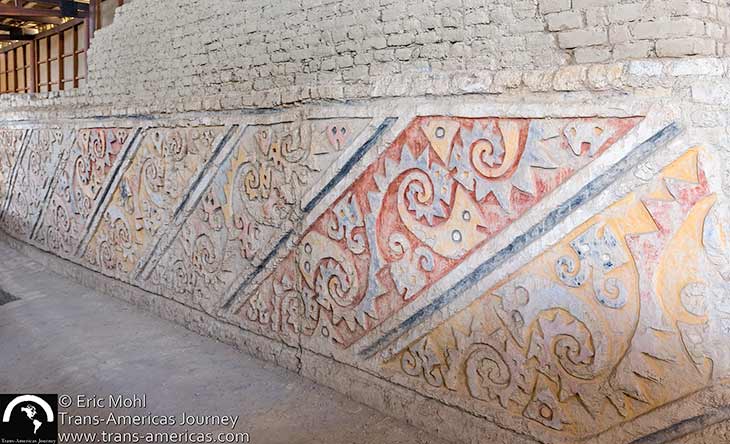 Frieze motifs include fish, birds, and prisoners. A recurring figure is the Decapitator God who is depicted as part human/part spider and is characterized by fierce fangs and is often holding a severed head in one hand. This figure is also frequently seen on Moche pottery. 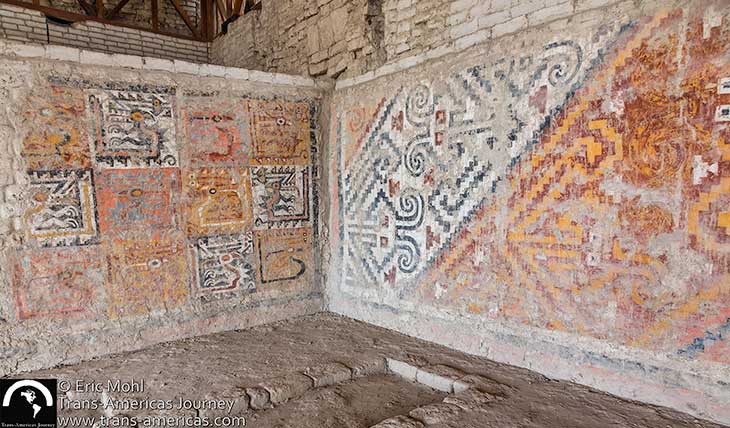 Friezes like this on in Huaca Cao Viejo still exhibit bright colors because they would have been covered in adobe bricks during construction of new levels on top of them, thus protecting this Moche art from the elements and from looters.

Huaca Cao Viejo is also where, in 2005, the Señora de Cao (Lady of Cao) was found. The 1,500-year-old tattooed female was buried with more than 100 metal objects, including crowns, necklaces, earrings, and (unexpectedly) weapons. Such a burial led experts to believe that the woman may have been an important leader of the Moche even though pre-Incan female leaders had not previously been recorded. 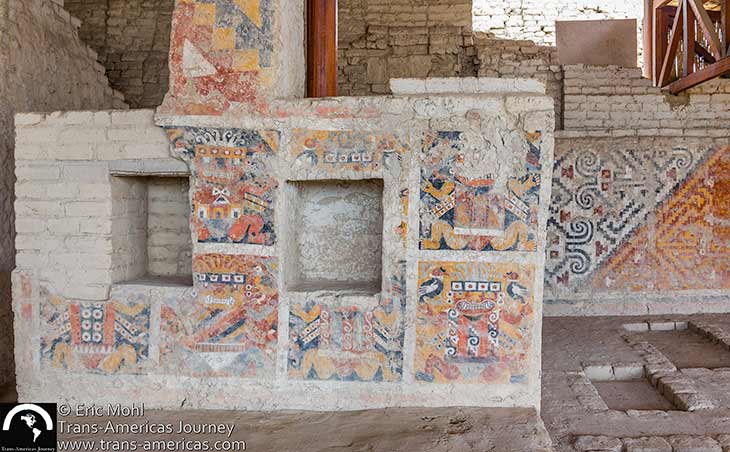 More versions of the Decapitator God adorn a patio in Huaca Cao Viejo.

You can see the mummified remains of the mysterious Lady of Cao in the well-designed Museo Cao which is part of the complex. Bankrolled by the Fundacion Wiese, which is run by a Peruvian family that used to have banks in Peru, this museum is in a modern, angular, concrete structure. Exhibits are extremely well-lit and laid out and all displays have explanations in Spanish and in English. 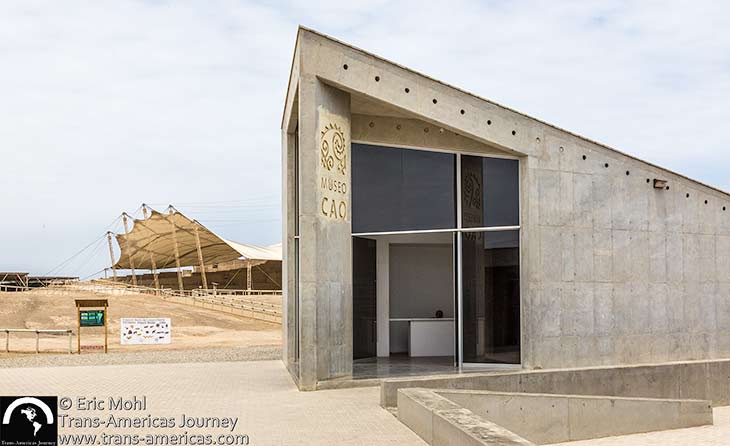 Leave plenty of time to explore the excellent Museo Cao at the El Brujo Archaeological Complex.

The highlight of this excellent museum is the Lady of Cao mummy. You can also see the fabulous textiles, jewelry, pottery, and gold pieces that were buried with her. Another notable exhibit at the museum includes a computer-generated life-like bust of the Lady of Cao created by international forensic experts. Allow at least an hour to tour the main areas of the complex and the museum. 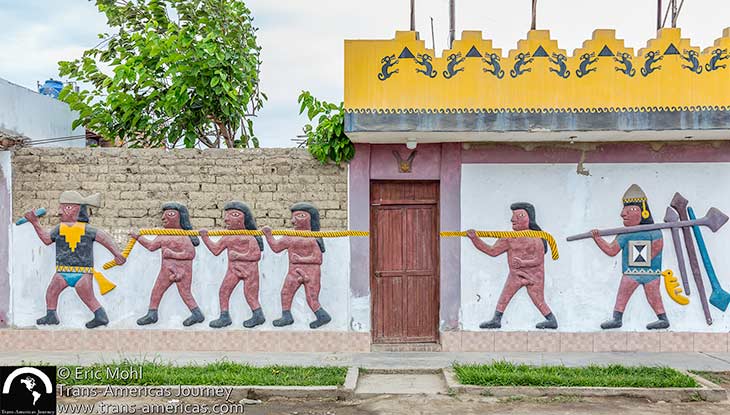 A modern version of a Moche frieze depicting prisoners on an adobe wall in the town of Magdalena de Cao.

The road to the El Brujo Archaeological Complex is paved except for the final mile or so and the nearby town of Magdalena de Cao is one of the cleanest, tidiest towns we saw in Peru, which came as a relief after so many miles of litter-strewn highways and so many trash-filled towns in northern Peru where litter is a real and growing problem.