If you want to visit the Tikal archaeological site (and you do) there are two base camp options for travelers: Flores or El Remate. We spent time in both towns. First up: El Remate which we believe is emerging as the better of the two options. 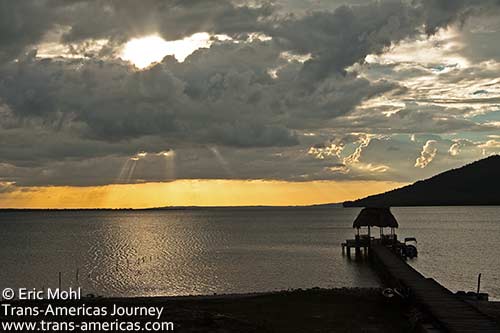 El Remate is a chill, village on Lake Peten Itza near the Biotopo Cerro Cauhi which has a growing list of budget and mid-range accommodations and a few solid economical eating options. El Remate is also closer to Tikal than Flores is, making your trip to the dramatic remains of this Mayan city shorter and cheaper. El Remate has the look and feel of what Panajachel on Lake Atitlan might have been like 30 years ago.

El Remate has a small selection of the usual passably clean hostels and dumpy guest houses. But if you have few more quetzales to rub together El Remate also offers some real values for money, all on the north side of the lake. 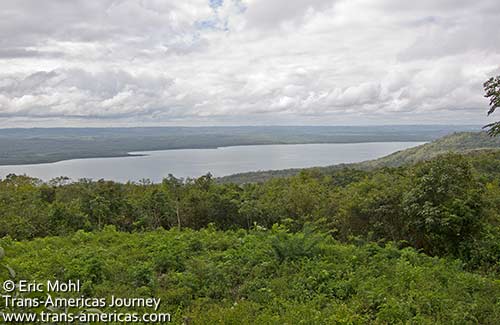 Looking down at Lake Peten Itza while horseback riding in the hills above El Remate, Guatemala.

Mon Ami had nice-looking stand alone bungalows in a quiet back garden for around US$20, but we didn’t stay there because we were being hosted at Posada del Cerro (300Q doubles, or about US$36, including breakfast featuring homemade bread) which turned out to be as interesting and worthy as we hoped it would.

Owned by a German biologist and community organizer named George and his Brazilian wife Raimunda, Posada del Cerro opened in 2008 right next to the entrance to Biotopo Cerro Cauhi. The Posada has seven rooms and bungalows, two charming apartments with kitchenettes, and one guesthouse with seven beds. Each one of them contains no less than five different types of local woods, some of them costing more than US$25 per foot on the open market. These gorgeous woods (yellow, toffee, dark chocolate) were used in building construction and in the clean, crisp furniture–much of it designed and created by George. 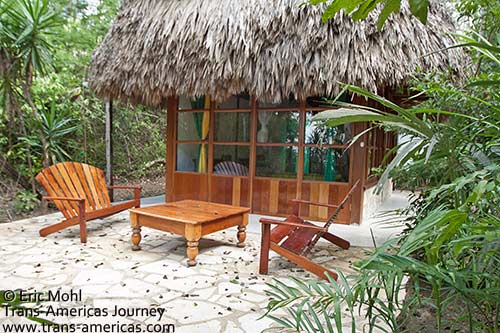 Rooms are minimal, homey and stylish–like an IKEA catalog (utilitarian design, primary colors) in the jungle and the place reminded us a bit of a budget version of Verana boutique hotel in Mexico. Excellent home cooked meals are available (often eaten with George and his family) and there’s Wi-Fi throughout and good views of the lake from some rooms. Check the mattresses before settling on a room, however. They’re all new and clean but some are very, very hard. 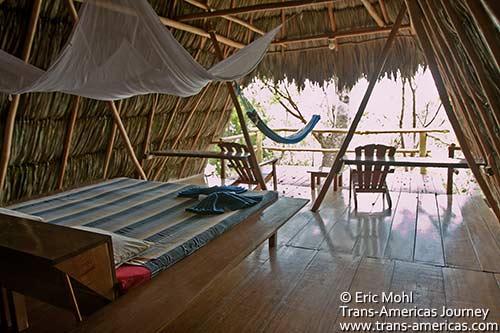 Right across the road there’s even a lovely dock jutting into the blue/green water of the surprisingly long and clear Lake Peten Itza, perfect for a cooling swim. 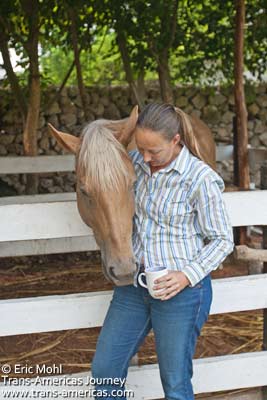 Karen starting the day off right at Palomino Ranch Hotel with two of her favorite things: coffee and a horse.

A slightly splurgier accommodation option in El Remate is Palomino Ranch Hotel (400Q doubles, or about US$50). The place has a dude-ranch-meets-hacienda vibe and a swimming pool with a horse head tiled mosaic in the bottom. There’s also a stable full of real horses–appaloosas, quarter horses, palominos, and even a cremello stallion which is a horse that’s pure white with blue eyes and whose genes guarantee to produce a palomino (beige coat with white mane and tail) foal when bred with a chestnut mare. It’s genetic magic.

Palomino Ranch owner Arturo Iriarte has been passionate about horses since he worked on his dad’s ranch as a child. Looking at him at the ranch you’d never guess he owns an advertising business in Guatemala City. Arturo’s well-trained horses (overseen by maestro de caballos Jose) were a pleasure to ride. 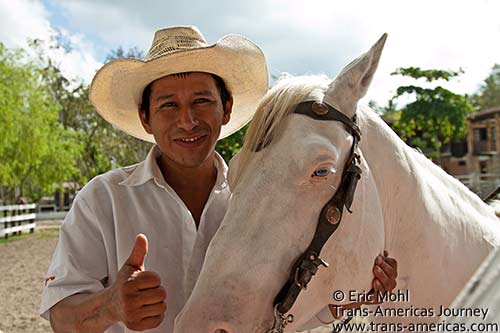 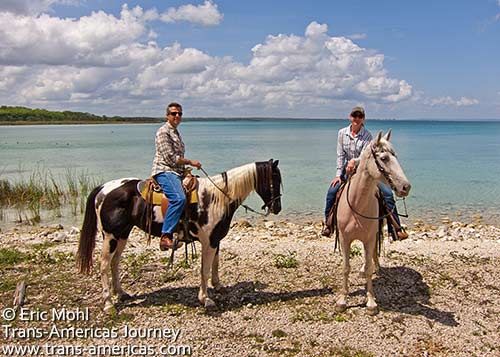 Arturo also owns a chunk of land near his hotel that’s dotted with unearthed Mayan ruins and abuts the neighboring Biotopo Cerro Cauhi which means he has fantastic, essentially private trails as well. Riding through these steep, jungly hills (150Q or US$20 for three hours) we got great views out over Lake Peten Itza and ample opportunities to dismount and wander through areas full of the remains of small Mayan settlements, mostly untouched by archaeologists or tourists. 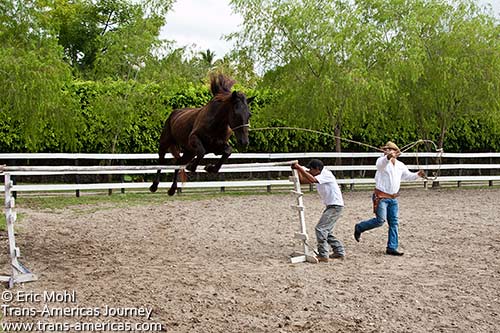 Owner Arturo Iriarte showing off the jumping skills of one of his horses at Palomino Ranch Hotel in El Remate, Guatemala. 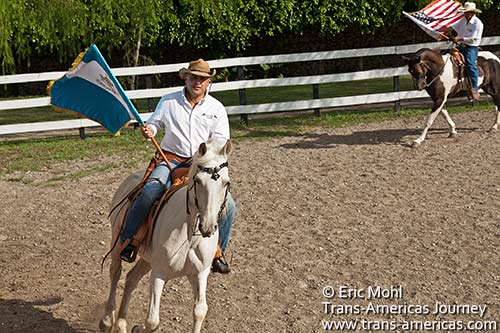 The next day we took the horses along the shores of nearby Lake Salpetén then looped back to the Ixlu archaeological site. The remains of this Mayan civilization have been excavated (and are probably being meticulously raked and swept by the devoted care taker even as we speak). Riding around and among the hulking structures added a fresh layer of adventure to the site. There’s just something cool about signing the visitor book at an archaeological site from horseback. 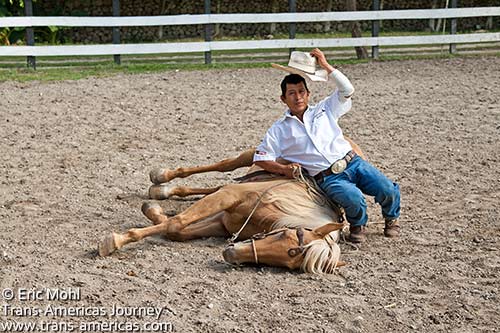 Mon Ami, which had the bungalows in the garden which we mentioned before, is also known for it’s food which was much better than average and very reasonably priced. One warning: Don’t get hoodwinked by their less-than-clear sign about internet charges. The 10Q (about US$1.25) amount posted is PER HOUR even though that’s not mentioned on the sign…

Two places that caught our eye but we never got the chance to try are Sugar Sap, an open-air cafe with homemade desserts and what looked (and smelled) like real coffee (located near Mon Ami) and Las Orquídeas (also near Mon Ami) where people swear by the pizza. 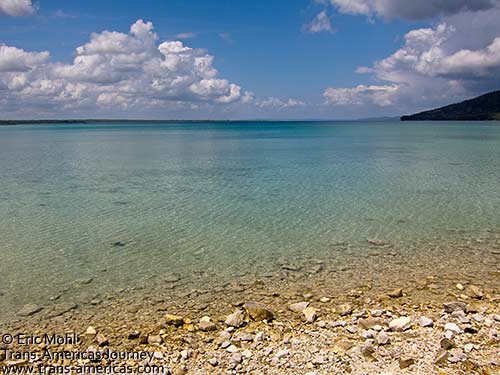 The crystal clear waters of Lake Peten Itza at El Remate in Guatemala.