Many Galapagos guides told us that Española is their favorite island in the archipelago, which was designated a UNESCO World Heritage site in 1978, because Española offers some of the best of the Galapagos including a high density of species, one of the longest and loveliest beaches, and the only waved albatross nesting area in the world. Here are travel highlights from visiting Española Island in the Galapagos Islands in Ecuador. 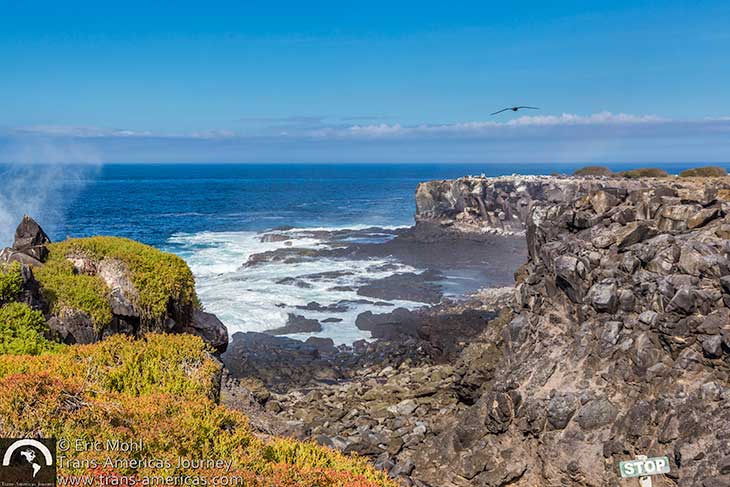 This craggy seafront plateau on Española Island is the only waved albatross nesting area on earth.

Española Island is the southernmost island in the Galapagos archipelago. It’s also one of the most remote islands, and one of the oldest at more than four million years old. 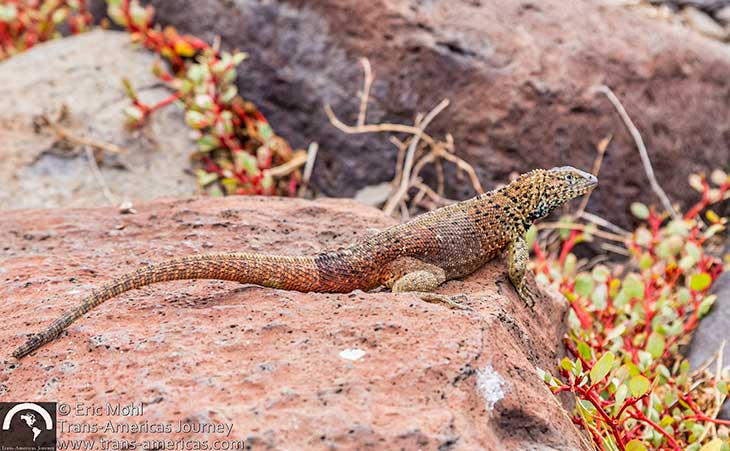 An Española lava lizard, one of the endemic species on the island.

Because of its remote location, Española has a large number of endemic species including the Española mockingbird, the Española lava lizard, red and green marine iguanas, and the island’s star species: the waved albatross (sometimes called the Galapagos albatross) which is not endemic, but this bird’s only nesting area is on Española. There are also Galapagos giant tortoises in the upper elevations of the island and they’re currently benefiting from serious conservation efforts. 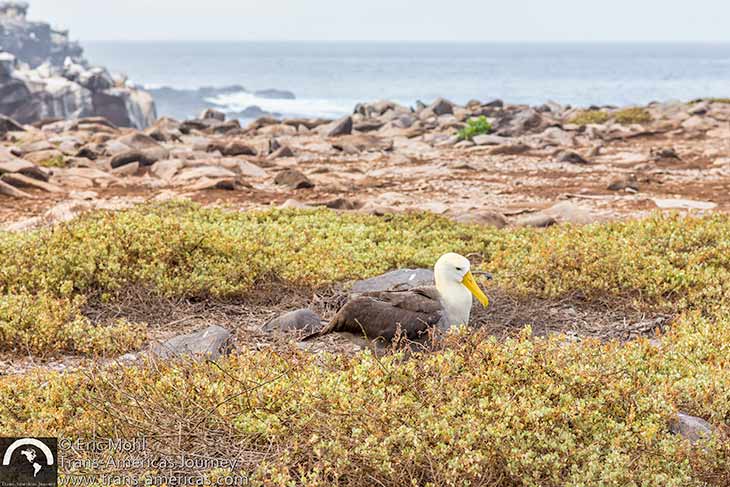 A nesting waved albatross on Española Island in the Galapagos.

We visited Española Island as part of the itinerary during our trip aboard the Origin with Ecoventura.

The albatross haven of Punta Suarez

After a wet landing at Punta Suarez we picked our way around lazy sea lions and embarked on the rocky and mostly flat 2 mile (3 km) inland trail, eventually reaching what we’d come here for. 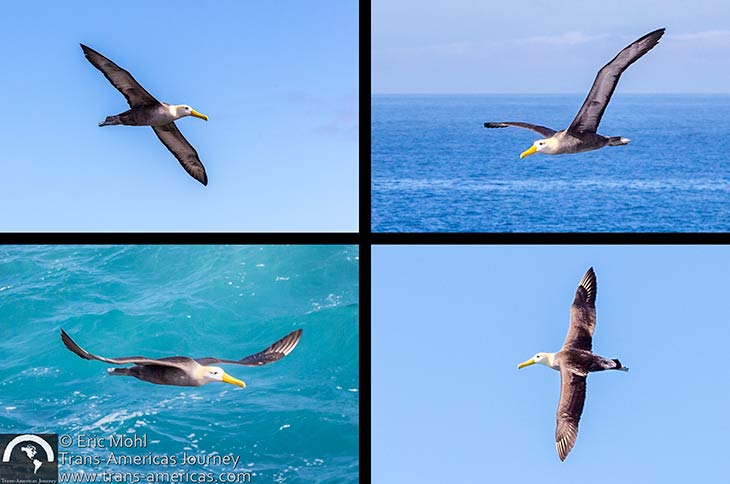 Waved albatross are built to spend months or even years on the wing.

According to the Galapagos Conservancy, a not-for-profit conservation group, the world’s entire population of adult waved albatross returns to Española Island where 25,000 to 30,000 adults congregate throughout the nesting season (April to December). 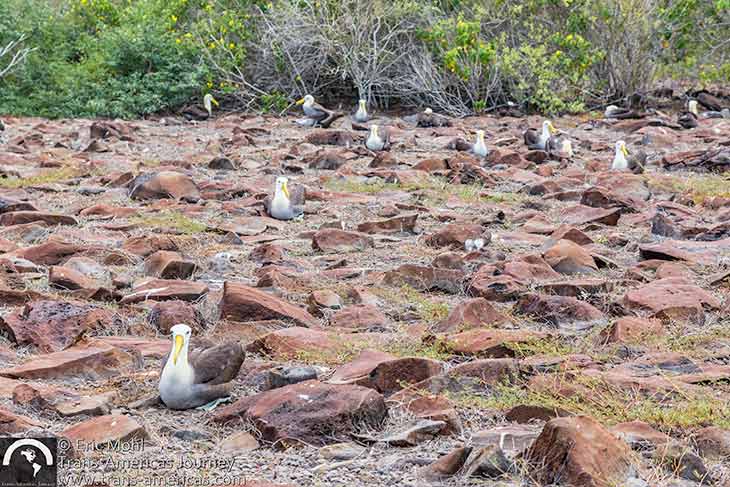 The nesting grounds were crowded when we were there, but would soon get even more packed.

These critically endangered animals mate for life and their mating dance involves stumbling, honking, and “fencing” with their bright yellow beaks. The display can go on for five days. When they finally get down to business, the pairs produce one egg per season. 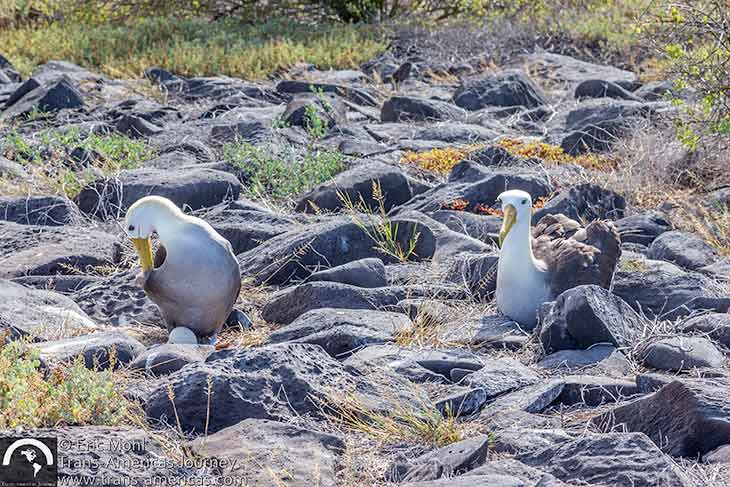 We visited Puerto Suarez early in the mating season, so we didn’t see any chicks. We did, however, see a waved albatross egg and it was just about as big as you’d expect from a bird that’s 3 feet (1 meter) tall, can weight 9 lbs (4 kilos), and has a wingspan of up to 8 feet (2.5 meters). With no trees or people in these photos for scale, you may be thinking that the waved albatross is basically a big seagull but they’re much, much, much bigger than that. 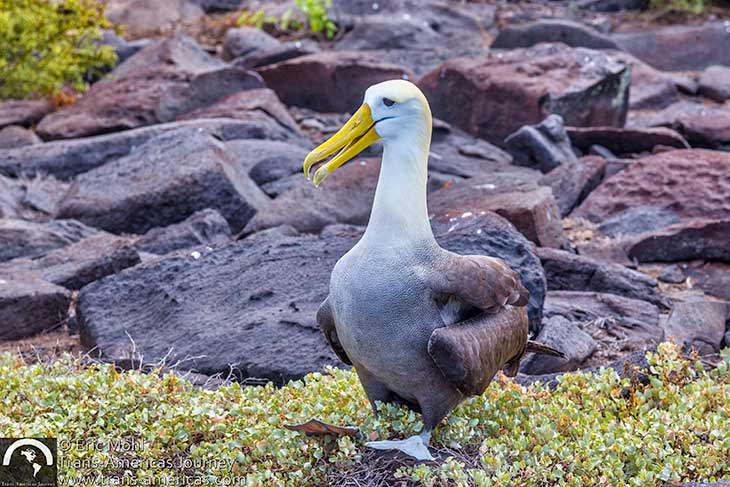 The feathers on the bird’s chest make a waved pattern, hence the name.

The pattern of their feathers really does achieve a waved effect and the trail that takes visitors around the nesting colony on Española gets you close enough to really appreciate the intricate beauty of the birds. 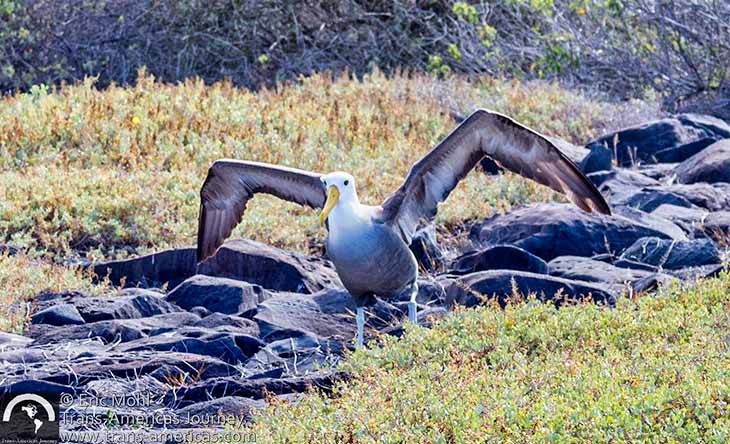 The albatross’ 8 foot wingspan is a gift in the air, but a burden on land.

The birds are also elegant in the air where they are perfectly designed for what looks like effortless flight. On land, however, they waddle and stumble and trip over their feet and wings which seem to be too big and too heavy and we felt sorry for them as they tried to move around on the ground. 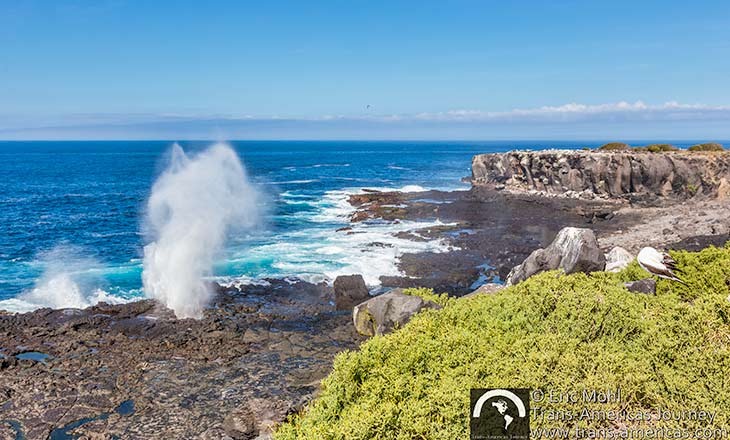 At high tide, the blowhole on Española Island can shoot seawater 100 feet into the air.

Another spectacular feature of Puerto Suarez is its natural blowhole. It might be easy to overlook it with all those nesting albatross around, but it periodically makes itself known when incoming seawater shoots up to 100 feet (30 meters) into the air.

Here are more photos from the Puerto Suarez area of Española Island. 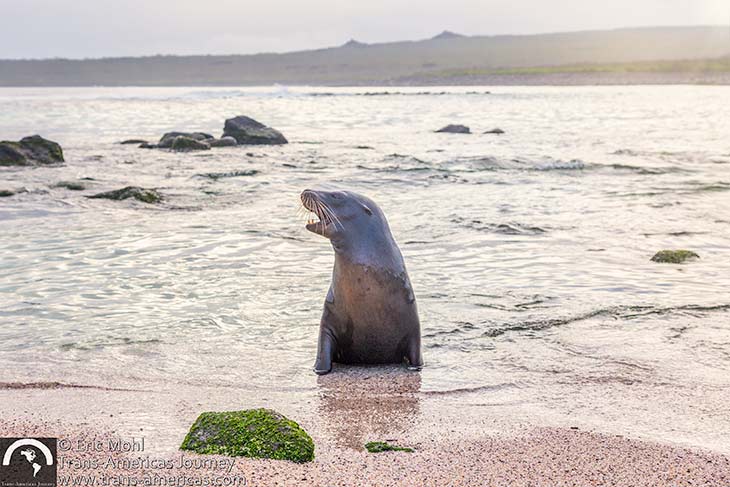 A Galapagos sea lion in the shallows at Puerto Suarez. 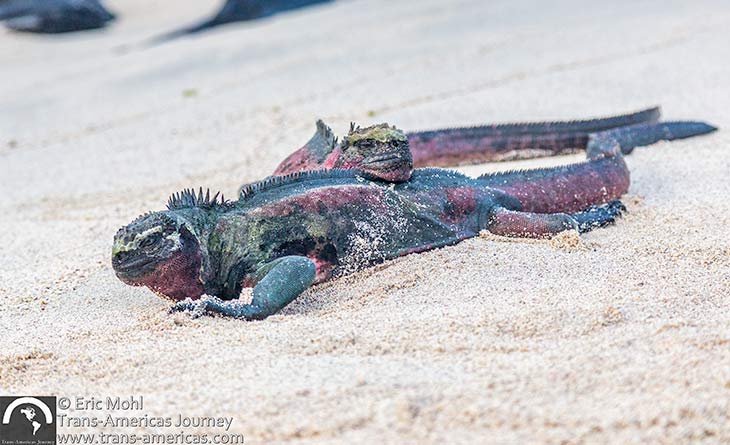 Another one of the endemic species on Española Island is this red and green Española marine iguana, sometimes called a Christmas iguana. 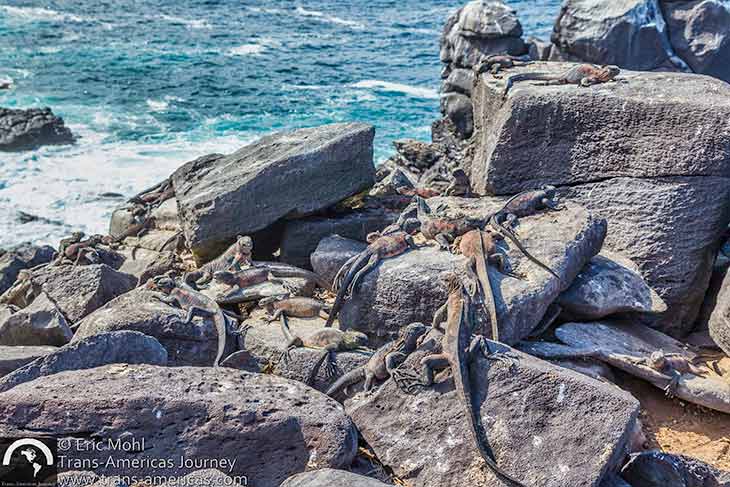 Marine iguanas warm up in the sun on Española Island. 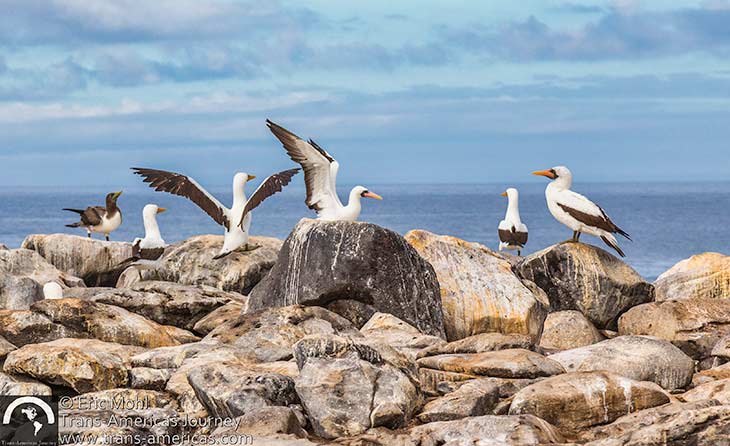 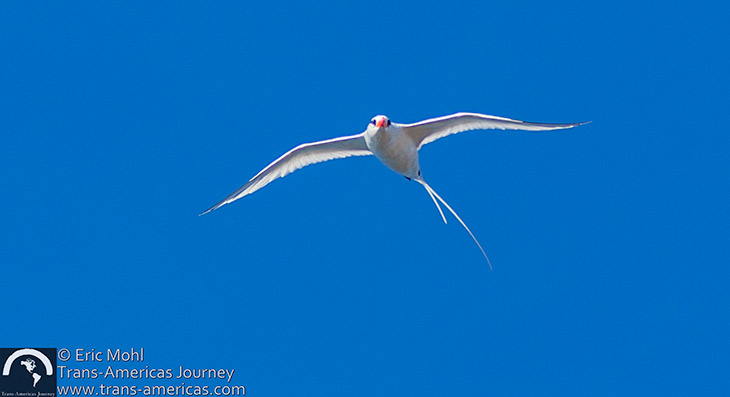 A red-billed tropicbird with its trademark red bill and split tail. 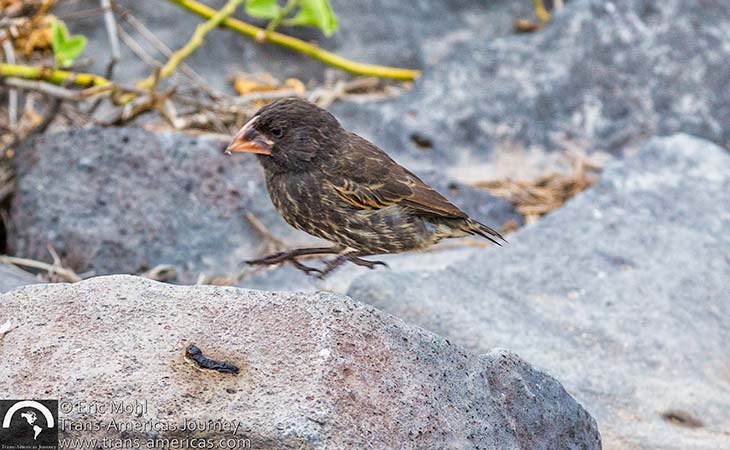 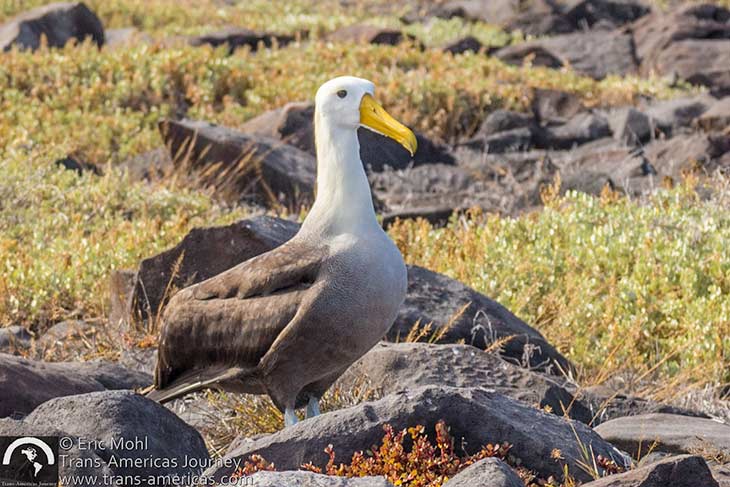 Waved albatross are the stars of the show on Española Island. 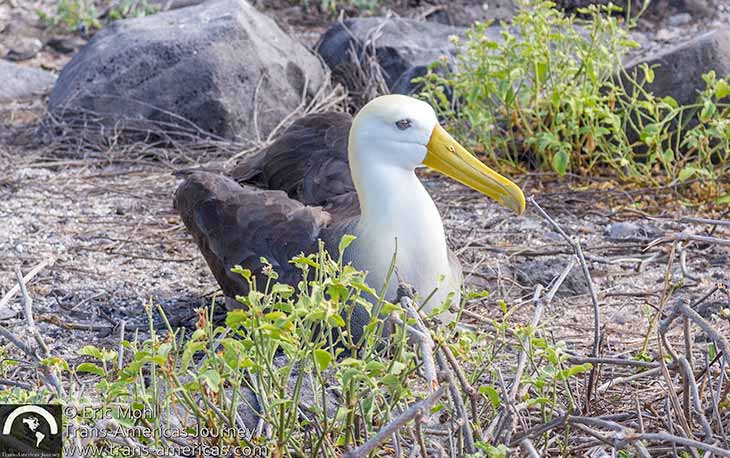 It may look like a large seagull but waved albatross are imposingly large in person.

The beach at Gardner Bay, on the western part of the island, is a 1.25 mile (2 km) stretch of lovely white sand dotted with lounging sea lions. It’s one of the longest and loveliest beaches in the Galapagos. There is no trail here and visitors are restricted to the beach or the water in Gardner Bay where we snorkeled.

Animal highlights: On the beach, we saw many sea lions. In the water, we saw a green sea turtle, lots of diamond rays, and a whitetip reef shark.

See more of Española Island in our Galapagos Islands travel video below.