A pioneering business that helped open up the Amazon Basin around Iquitos, Peru to tourism is still going strong more than 50 years later. Use our Amazon Travel Guide to choose the Explorama option–including famous Ceiba Tops Lodge and one of the biggest elevated jungle canopy walkways in the world–that’s right for you. We’ve got lots of drone videos too for added inspiration. 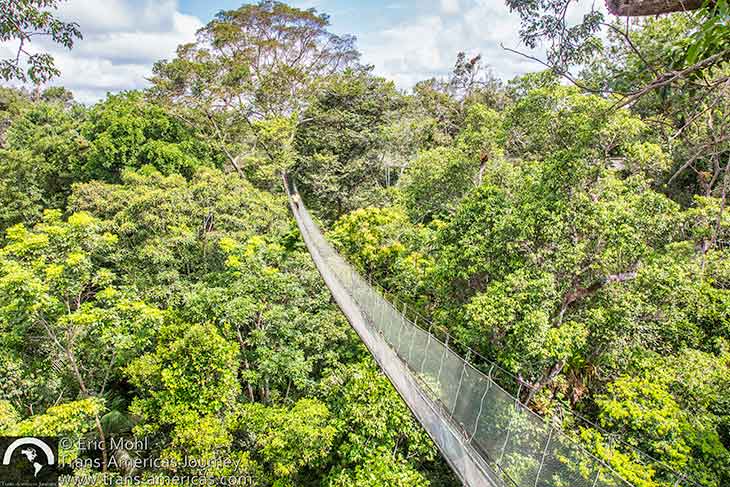 You may have heard of the famous Canopy Walkway through the Amazon rainforest near Iquitos, Peru but it’s even more impressive in person.

In the mid-1960s, Peter Jenson was completing his US Peace Corps service in Peru where he worked with archaeologists. When his volunteer work was done, he traveled north to Iquitos and fell in love with the Amazon. By the mid-’60s he’d opened one of the first tourist lodges in the Amazon Basin in northern Peru. Jenson passed away, but the company he founded, Amazon Explorama Lodges, still offers a wide range of ways to explore the Amazon including four lodges, village visits, hiking trails, and a famous canopy walkway. 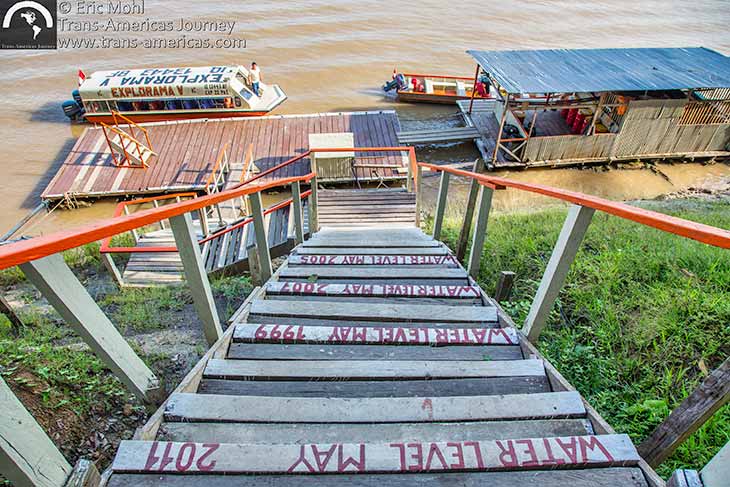 The stairs from the Amazon River up to Ceiba Tops Lodge are marked with high water levels through the years.

Even without Jenson running things in person, the Explorama operation has the feeling of a family business. Most guides and staff were born in the local area and many employees have been with Explorama for more than a decade. This adds to the overall authenticity of Explorama’s experiences. We visited each of the Explorama lodges, walked many of their trails, and shot amazing drone footage over the canopy walkway so you can see what Explorama has to offer for Amazon travelers. 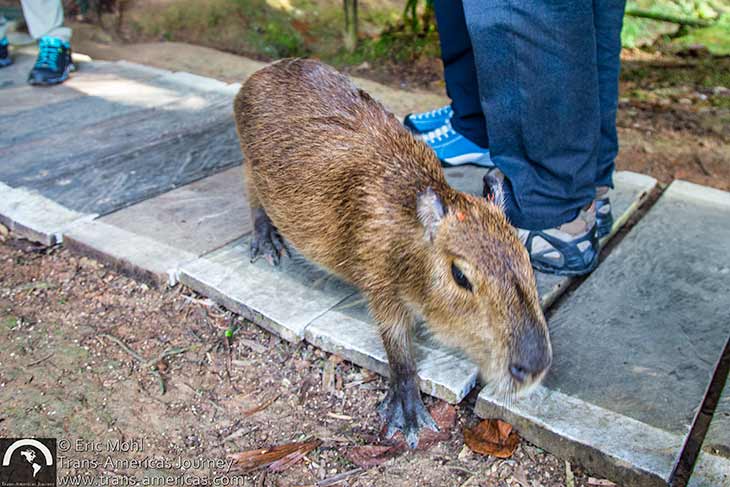 This young capybara at ExploreNapo Lodge was as friendly as a pet. 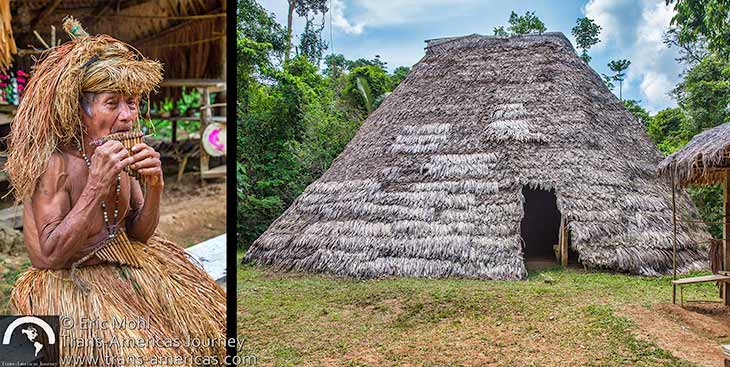 Our visit to a Yagua village near Explorama Lodge included traditional dancing in the thatch-roof cocamera ceremonial house and examples of traditional crafts.

Exporama Lodge was built in 1964 and was the first lodge in the group. In 2016 the thatch roof structures connected by raised walkways located 80 miles (50 km) down the Amazon River from Iquitos, underwent a renovation and upgrade. Today, this lodge has electricity, Wi-Fi, private bathrooms, fans, screened windows, and mosquito netting. The open-air Hammock House remains a big draw as does the range of activities from this lodge.

We also got some blowgun lessons during our visit to the Yagua village. Turns out, Karen’s pretty good at it.

There are several hiking trails around this lodge and another option is a visit to the nearby Yagua village where members of the community have built a ceremonial house called a cocamera to show to visitors. Traditionally-dressed community members demonstrate some dances and also sell a wide range of crafts. You can also try out your blowgun skills.

Our video, below, shows some of the traditional dancing in the cocamera ceremonial house.

Another excursion from Explorama Lodge took us to meet Cesar, a third-generation distiller, who showed us his still which he used to make 1,200 liters of sugar cane hooch per year. He said Spanish conquistadors taught his ancestors how to use the still and added that there are at least three other distillers in the area.

Cesar and his still.

Cesar explained that a horse-powered press extracts juice from locally-grown sugar cane. Then Cesar uses roots and vines to create four different flavors of distilled booze which were all surprisingly smooth and drinkable (buy a bottle if you’re looking for a unique souvenir).

At just 45-minutes by boat, this is the Explorama lodge that’s closest to Iquitos. It’s also the newest lodge in the group and offers the most complete list of amenities. 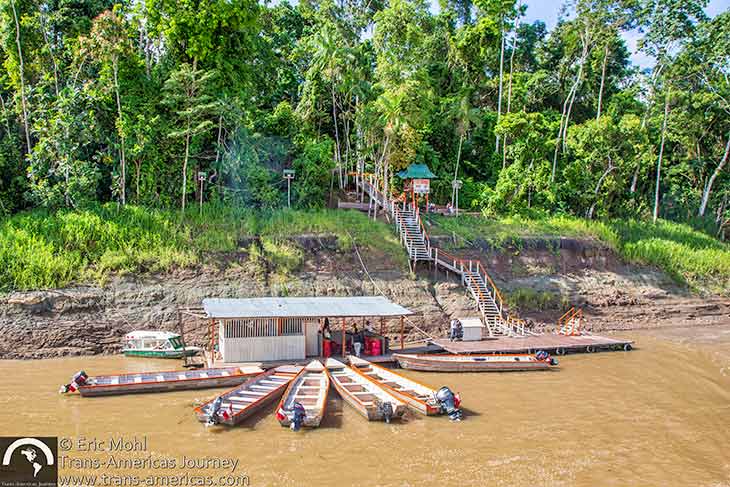 The dock at Ceiba Tops Lodge.

Ceiba Tops Lodge, built on the banks of the Amazon River, has 24-hour electricity, hot water showers, Wi-Fi, air conditioning, and a pool. There are also a couple of suites, including one spacious accommodation where Explorama’s founder lived until his death in 2010. 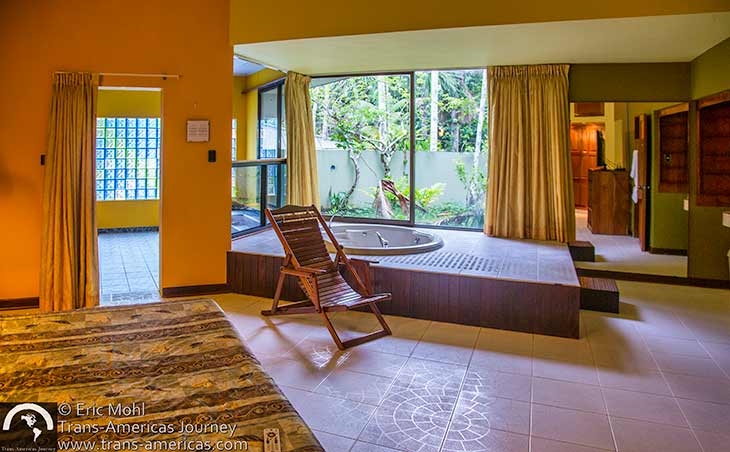 A suite at Ceiba Tops Lodge. Yes, that’s a private Jacuzzi in the jungle.

Guests looking for amenities like these often choose to make Ceiba Tops their base from which to take day trips to other Explorama properties and attractions. Another reason to stay at Ceiba Tops? Cynthia, the friendly wild tapir. 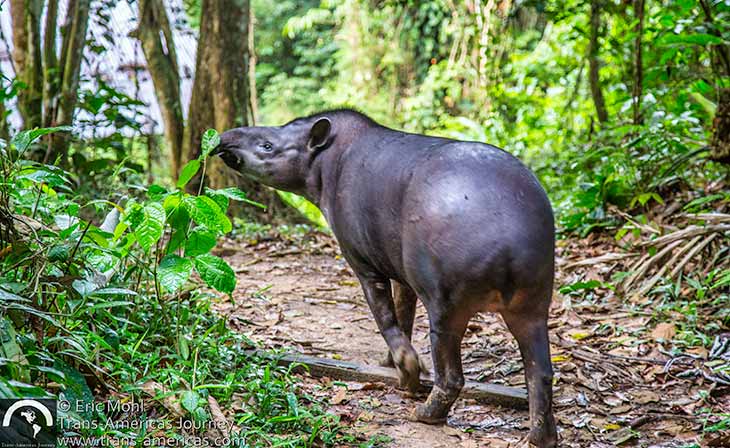 Tapirs are usually elusive and shy, but over the years Cynthia has gotten used to humans and she is often seen on the grounds of the lodge, usually at a water tap. Check her out in our video below.

When we were at Ceiba Tops staff members had also recently released a rescued harpy eagle which is another rare wild animal event. 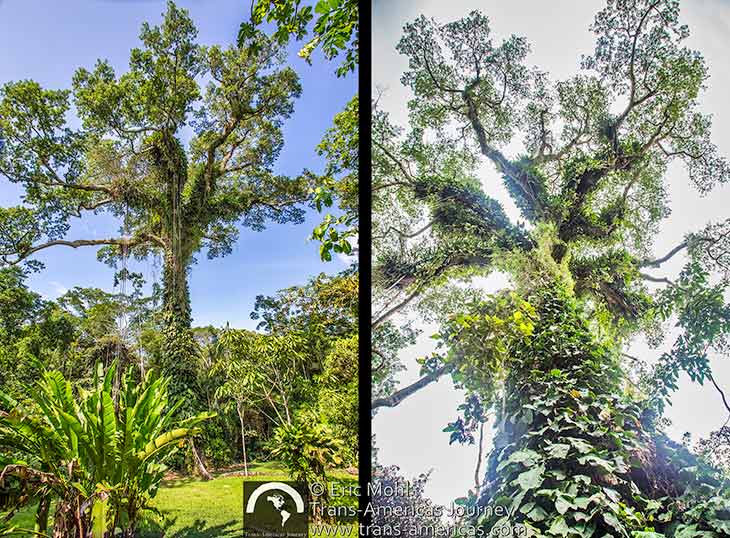 Ceiba Tops Lodge gets its name, in part, from this massive ceiba tree on the grounds of the lodge. It’s 128 feet (40 meters) tall and about 100-years-old.

Our drone video, below, shows the scale of that massive ceiba tree plus views from above Ceiba Tops Lodge and over the Amazon River.

Accessible primary jungle can be hard to find in the Amazon. This lodge is surrounded by it.

We saw a lot of black-mantled tamarins around ExplorNapo Lodge.

ExplorNapo Lodge is located off the Napo River on a peaceful tributary hemmed in by dense primary jungle which black-mantled tamarins seem to love (we saw tons of them). The lodge is located about 100 miles (160 km) from Iquitos inside the Sucusari Reserve. 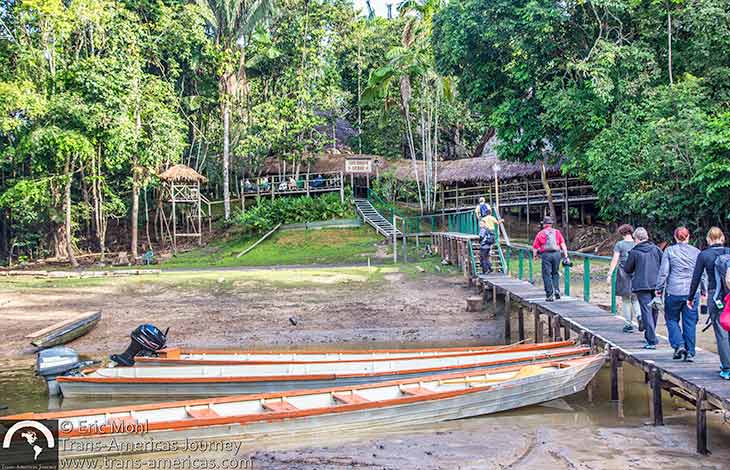 This off-the-grid lodge consists of a series of thatch-roof buildings connected by raised walkways. Simple rooms are outfitted with oil lamps and netting over beds and have shared bathroom facilities. Rooms were designed with partly-open walls to allow in the breeze to make up for the lack of fans or air-conditioning. A generator kicks in after dark to provide power until about 10 pm and Wi-Fi was recently added. 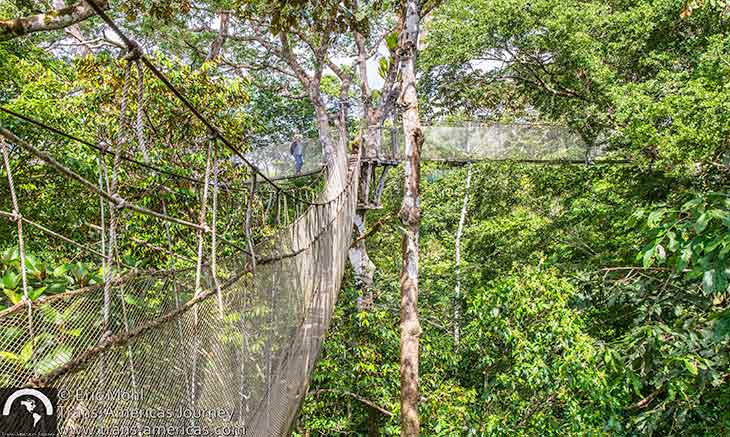 Some of the interconnected hanging walkways that make up the massive Canopy Walkway.

The big draw here is the primary jungle that surrounds the lodge and the nearby Canopy Walkway (which is part of the ACTS Field Station, more on that below). Designed by a Peruvian who was inspired by a treetop walkway in Malaysia, the Canopy Walkway at took two years to build, in part because no heavy machinery was used to reduce damage to the rainforest. 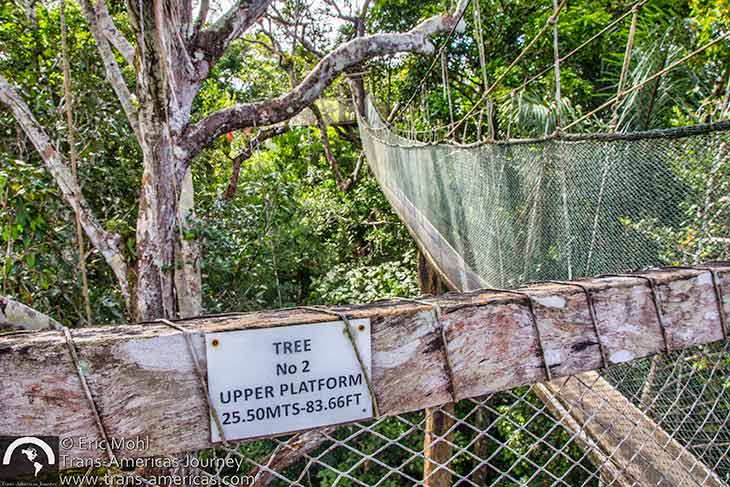 One of the 14 platforms that are incorporated into the Canopy Walkway.

The final result is one of the longest and highest canopy walkways in the world at a third of a mile (500 meters) long and up to 115 feet (36 meters) above the ground. The walkway connects 14 platforms and as we walked along the walkway we saw toucans, tree frogs, monkeys, and many more jungle critters all at eye level. Being “in” the trees also gave us a very different perspective on the jungle. The walkway is extremely well-built and secure, but it’s still not for those with vertigo or balance or mobility issues. 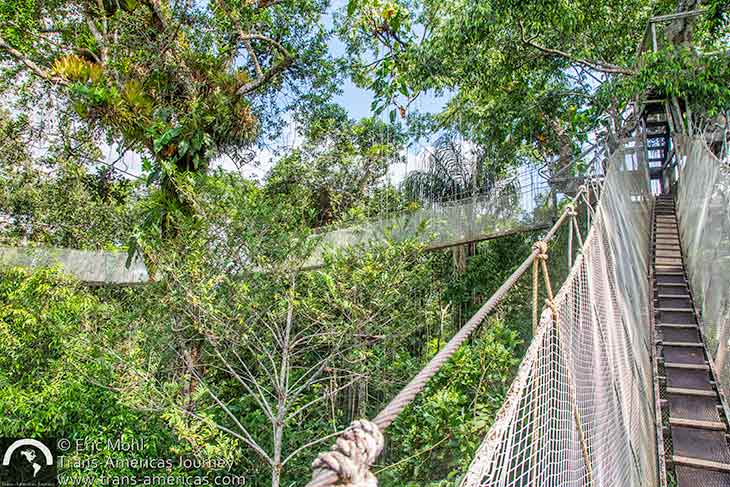 The Canopy Walkway rises to 115 feet (36 meters) above ground and some stretches actually climb up.

See this outstanding jungle attraction from above in our drone footage, below, which we shot over the Canopy Walkway.

We also visited the ReNuPeRu Ethnobotanical Garden on the grounds of the ExplorNapo Lodge. This was an excellent place to learn about the hundreds of medicinal plants used by communities living in the Amazon. 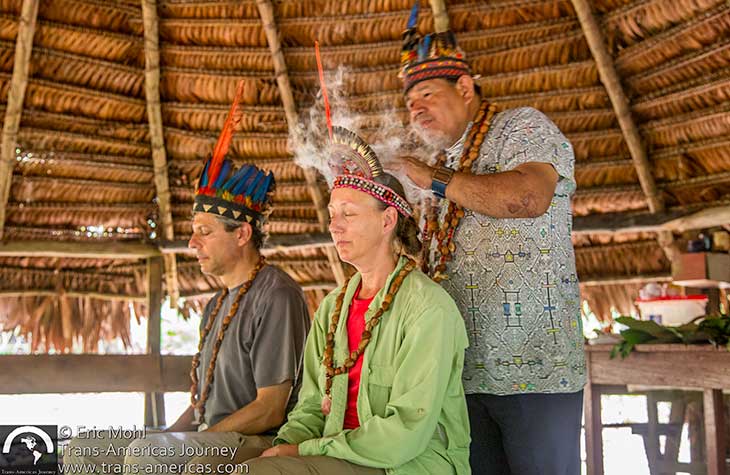 Us getting a traditional cleansing at the medicinal plant garden that’s part of ExplorNapo Lodge.

You can also schedule a traditional cleansing ceremony (we did) and some potions and tinctures are for sale. We bought a small bottle of sangre de drago (dragon’s blood) which is a bright red liquid harvested from tree bark. It’s said to be good for reducing scars and soothing skin irritations and cuts. 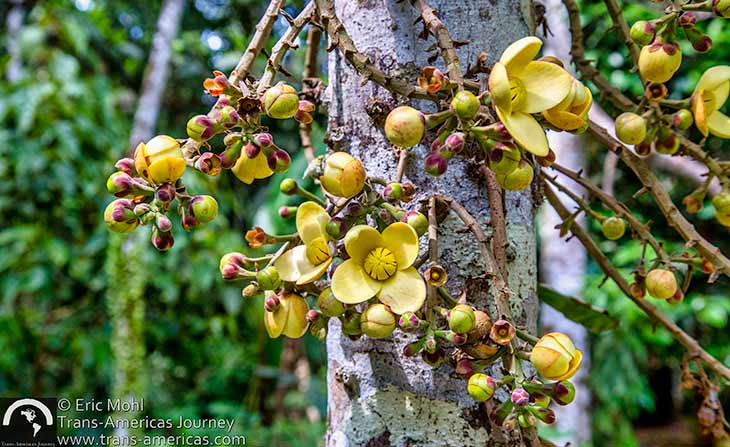 We’re not sure what this flowering plant/vine/tree is, but we love it.

Guests can now also visit a nearby Maijuna indigenous village upstream from ExplorNapo. The community built a cultural interpretation center where they explain their way of life and explain how their group of four villages was able to resist loggers and establish a Regional Conservation Area in their name which now protects nearly a million acres (404,000 hectares). Visitors can also see how community members raise stingless bees and collect honey which is also for sale. 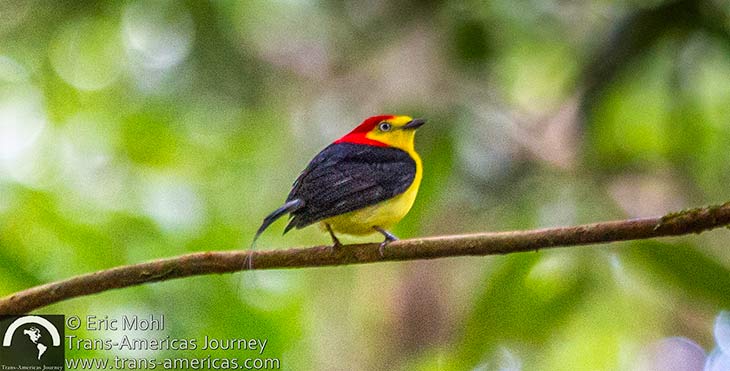 Luck (and a very good guide) were with us when we spotted this wire-tail manakin during a hike near ExplorNapo Lodge.

Another highlight of our time at ExplorNapo Lodge was a walk during which our guide spotted a wire-tail manakin. This is one of the most flamboyant and most hard-to-see birds in the rainforest. Our sighting was brief but spectacular. If you’ve never seen this bird’s over-the-top courtship dance, watch this video. 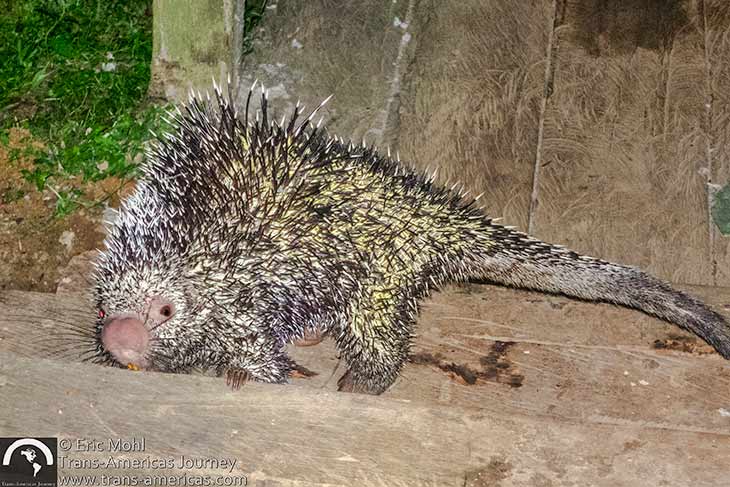 A nighttime visit from the only species of porcupine that lives in Peru.

See more in our drone video, below, over the Napo River and ExplorNapo Lodge.

The most remote and most basic of the Explorama Lodges is also the most immersive. A stay at the ACTS Field Station gives the feeling of being in the Amazon. Built in 1993 as a basecamp for scientists, ACTS (which stands for Amazon Conservatory of Tropical Studies) now also accommodates travelers looking for a more remote and immersive experience. 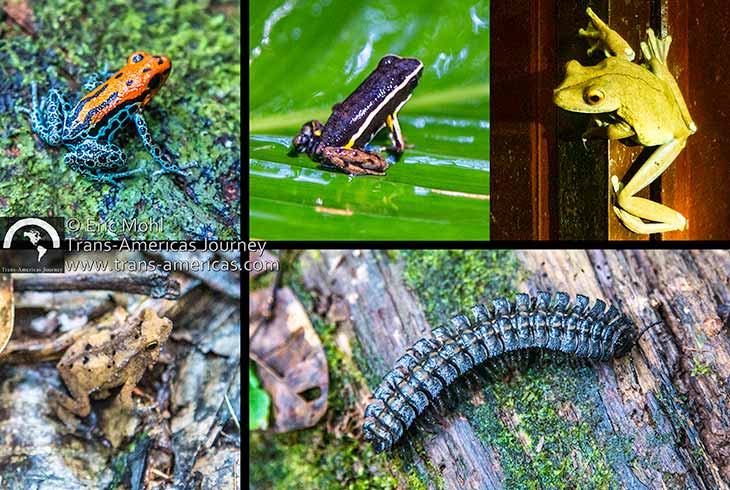 Frogs and insects of the Amazon.

Guests at the field station can expect basic accommodation in thatch roof buildings with a focus on exploring the surrounding jungle via a series of trails. This lodge is also home to the Canopy Walkway. 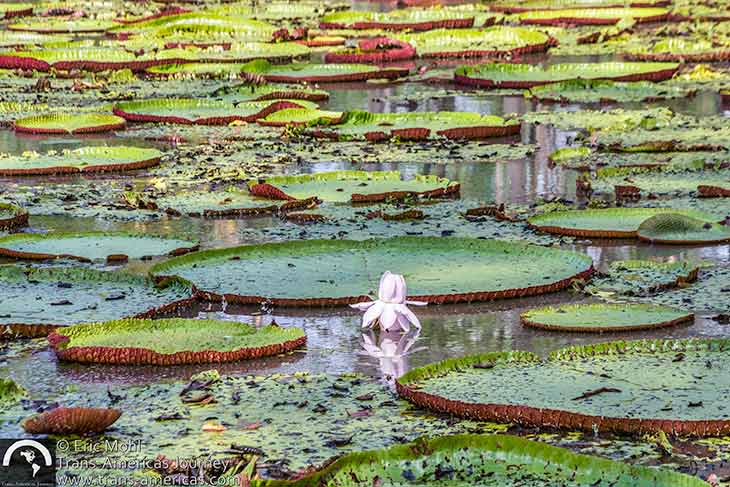 Giant Amazon lily pads can grow to be many feet across.

Rates at all Explorama lodges include river transfers from Iquitos, meals, and some activities. Explorama also offers a wide range of packages in addition to per-night rates. And Explorama now has a 14-room hotel with a pool in Iquitos called Jungle House. Rely on our Iquitos City Travel Guide for more information about how to make the most of this quirky, remote city. And use our post about 9 Great Big Amazon Travel Myths to help you plan your adventure.

River dolphins in the Amazon are an unusual fresh-water version of the species. Some are grey and some are pink.

Also, we are firm believers that rubber boots are the best footwear for walking in the jungle. You can buy rubber boots very cheaply in Iquitos (grab a couple of plastic ponchos while you’re at it) and we recommend leaving the boots and ponchos behind at your lodge when you’re done with your jungle explorations. An employee or a local will gladly out your lightly used boots and ponchos to good use. 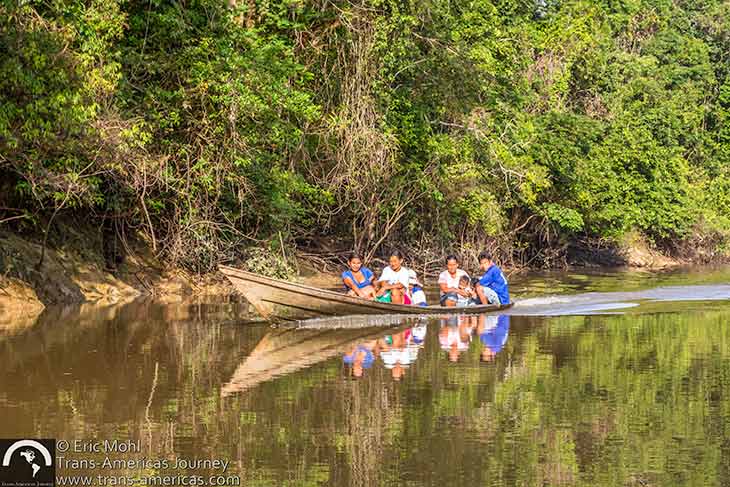 Local life in the Amazon Basin of northern Peru.