How to Explore the Panama Canal – Panama City, Panama

Traveling to Panama City without visiting the Panama Canal is like going to New York City without seeing the Statue of Liberty. There are many ways to explore the Panama Canal including dramatic canal-side observation facilities, a nearby fort reached via a bridge that lets your drive over the Panama Canal at Gatún Locks and, of course, you can cruise the canal. We did it all since one of us (guess which one) is certifiably canal obsessed. 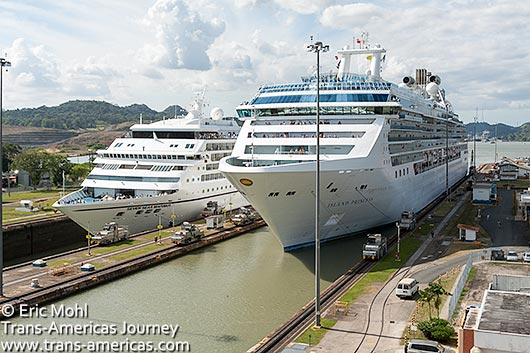 How the Panama Canal moves ships from ocean to ocean

The original Panama canal consists of six lock chambers. Three are on the Pacific side (there are two locks at Miraflores and a third at Pedro Miguel) and three locks are on the Atlantic side (all of them at Gatún). Massive Lake Gatún lies in the middle.

Ships enter the first three locks and are raised a total of 87 feet (26 meters) to reach Lake Gatún which they slowly travel across. Then they enter the second set of three locks which lowers them back to sea level. Think of locks as water-powered escalators.

Our time-lapse video, below, shows two cruise ships passing through the Miraflores Locks and will demonstrate how this engineering wonder works.

Here’s another time-lapse video showing a container ship being lowered through the Miraflores Locks. 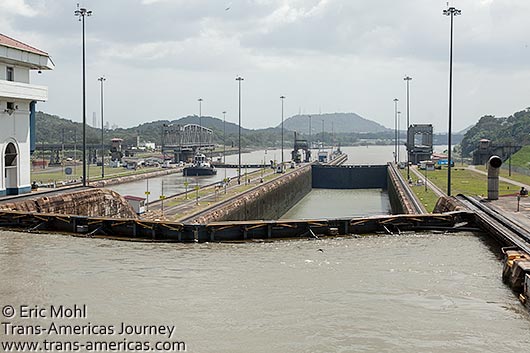 At the top of the two lock chambers at Miraflores we are lifted 54 feet (16 meters) over mean sea level during our tourist transit on board the Pacific Queen departing the Pacific Ocean.

The Miraflores Visitor Center (US$15 adult, US$10 children) includes a museum, snack bars, and observation platforms that allow you to watch mega ships pass gracefully through the Miraflores Locks right in front of your very eyes. 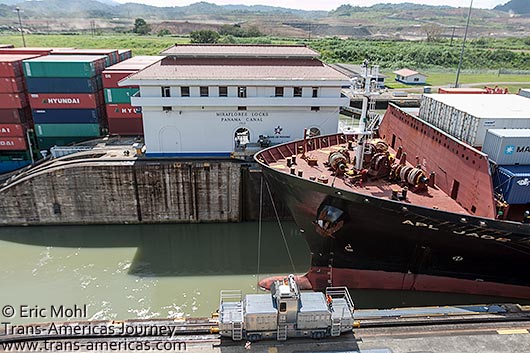 A ship transits through the Miraflores Locks and past the visitor center and observation decks there.

The Miraflores Visitor Center is located just outside Panama City and is a popular stop for tourists. Their restaurant lunch buffet is said to be as terrific as the views. However, Miraflores isn’t the only way to get close to the action in the Panama Canal.

The Gatún Visitor Center (US$5, children free), located close to Colon on the Atlantic side, has an observation area over Gatún Lock which is the longest lock in the whole canal since all three lock chambers are together here. It’s a simpler facility but it’s also the cheapest observation point on the canal, you can get closer to the action here and it doesn’t get nearly as crowded as Miraflores which can be wall to wall at times. 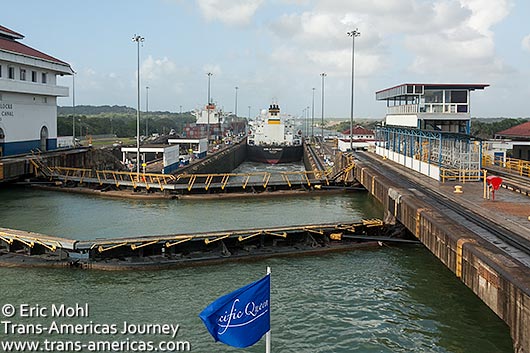 The small grandstand on the right lets visitors to Gatún Lock get close to the action. 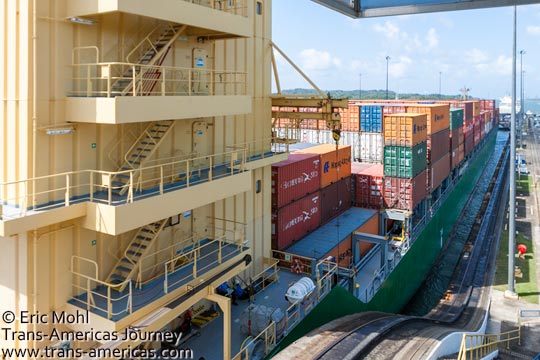 Massive ships pass THIS close at the Gatún Visitor Center. 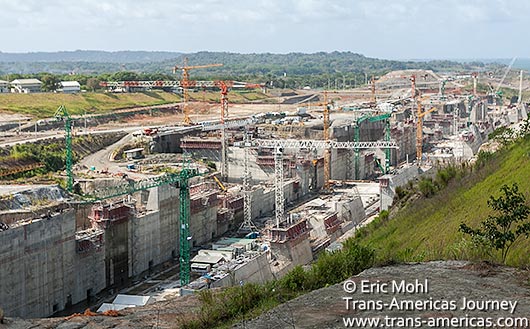 The work being done to create much larger parallel locks at the Panama Canal is on such a large scale that it’s hard to comprehend even when you’re standing there looking at it.

The expansion project, which costs more than US$6.5 billion so far, was started in 2007 and was expected to be done in 2015. The new locks were finally opened in June of 2016.

How to cruise the Panama Canal

If you’ve got the time and the money (at least half a day and around US$135 per adult and US$85 per child) you can experience the Panama Canal by traveling through the locks on a tourist boat as on board guides explain the engineering wonders of the canal and the process of moving safely through the locks.

The tourist boats are some of the smallest vessels that travel through the Panama Canal and it’s quite dramatic to be on board when the boat is squeezed into a lock along with massive cargo ships for the ride up (or down) inside the lock as water rushes in or is drained out. 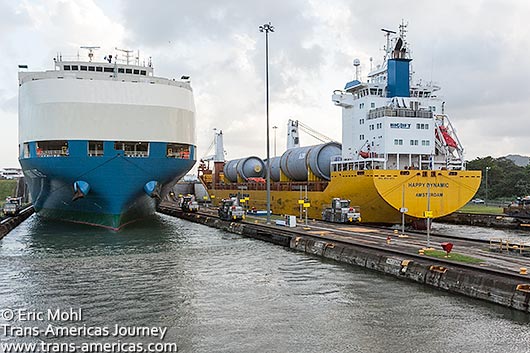 Cargo ships making their way through the Gatún Locks on the Panama Canal.

One-way canal cruises depart from either Panama City or Colon with bus transport one way. Half-day cruises take passengers through three locks while full-day cruises include all six locks taking you from the Atlantic to the Pacific, or vice versa.

We, of course, did the full-day cruise through all six locks. You can take the trip through the Panama Canal from ocean to ocean in under 11 minutes in our video, below, which we shot from on board our Pacific Queen Panama Canal cruise tourist boat. 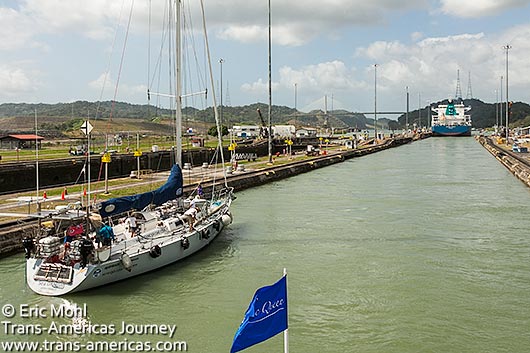 Though most of the vessels in the Panama Canal are enormous ships, some small craft like this pass through as well and they often need volunteers to be line handlers during the transit which represents a chance to make the journey for free.

Driving over the Panama Canal

The San Lorenzo Fort (US$5) is cool. The Spanish finished the fort in 1599 and its position at the mouth of the Chagres River where it meets the Atlantic Ocean allowed the Spanish to stay vigilant against pirates who were on the hunt for the treasures the Spanish were hoarding.  Today you can see massive stone walls, turrets, and domes plus great views down the Chagres. The fort was named a UNESCO World Heritage site in 1980.

San Lorenzo Fort, a UNESCO World Heritage Site on the Chagres River where it meets the Atlantic Ocean, is accessed by driving over a section of the Panama Canal. 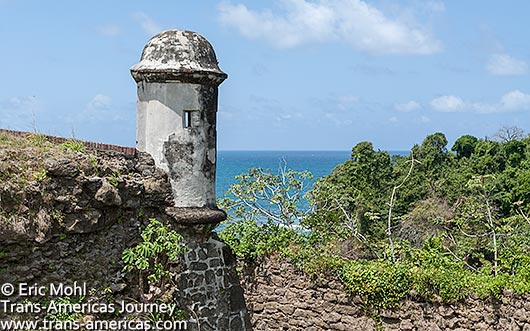 San Lorenzo Fort, a UNESCO World Heritage site on the Chagres River where it meets the Atlantic Ocean, is accessed by driving over a section of the Panama Canal.

Getting to San Lorenzo Fort is even cooler than the fort itself because it involves waiting for the massive, metal gates at Gatun Locks to close then watching as a metal swinging bridge rotates to create a roadway over the canal. Then you drive over the Panama Canal.

Our truck gingerly entered the small bridge and we crept right past massive metal lock doors which were so close we could almost touch them as we passed. Water actually sprayed out from cracks and crevices in the doors which made the drive even more dramatic. 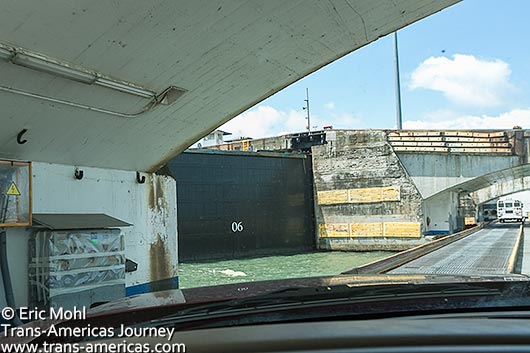 This shot was taken through the windshield of our truck as we drove onto a swing bridge over the Panama Canal. The thing marked 06 on the left is a massive metal lock door holding back tons of water so we can drive safely past.

Locked up on the Panama Canal

You can’t actually visit it, but there’s a prison on the banks of the Panama Canal. It’s called El Renacer Prison and Manuel Noriega, former dictator of Panama and nemesis to the US, calls it home.Though Noriega was on the CIA’s payroll at one time, he ultimately became the first foreign head of state to be convicted in a US court. The US wanted him so bad we even launched a short-lived but bomb-filled invasion of Panama to get this guy which pretty much destroyed the Casco Viejo area which is now the hippest neighborhood in Central America.

Panamanians call Noriega la cara piña (pineapple face) because of his famously bad complexion. Given the nasty stuff Noriega was involved in and the bad things he did to his own people (murder, money laundering, corruption, drug trafficking) you’d think they could come up with something meaner. 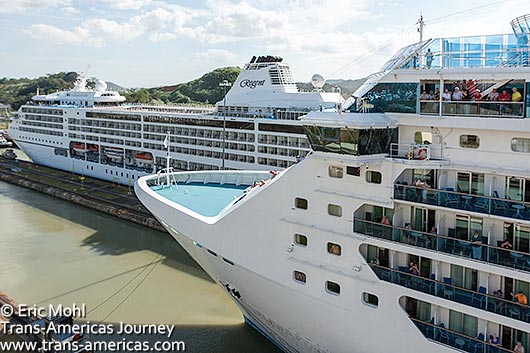 The largest cruise ships pay more than US$300,000 per Panama Canal transit. 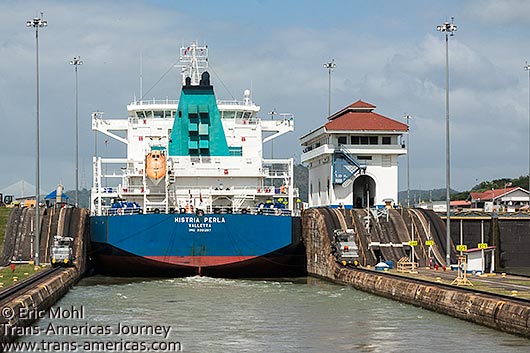 It’s a tight fit for Panamax-size ships in the existing Panama Canal locks which is why billions are being spent to create new, larger locks to accommodate even larger ships. 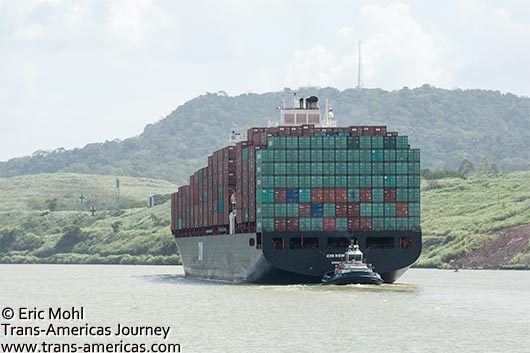 Ships like this one can carry more than 5,000 containers and pay more than US$400,000 in tolls and fees to transit the Panama Canal when fully loaded. 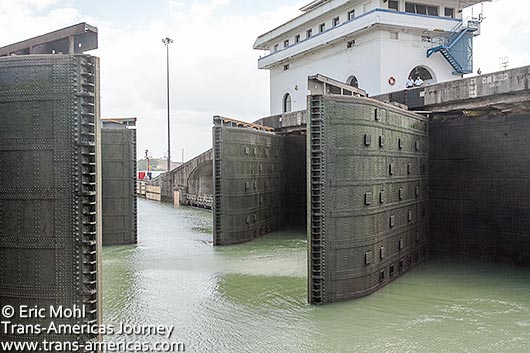 Lock doors on the Panama Canal are 47 to 82 feet (14.3 to 25 meters) high, seven feet (2.1 meters) thick and they’re hollow and buoyant which means that even though they weight up to 662 tons each it only takes a pair of 25 horsepower motors to move them. Did we mention that they’re also 100 years old? 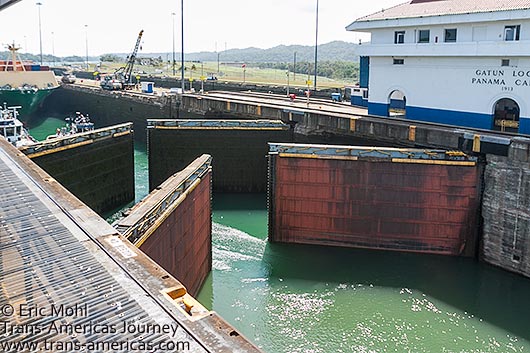 Lock gates at Gatún opening to let a ship pass. 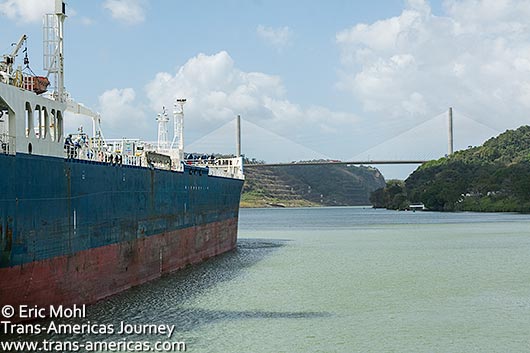 Centennial Bridge in the background as a ship heads for the Pedro Miguel Locks during its journey through the Panama Canal.

Still want to know more about the Panama Canal? Read “The Path Between the Seas” by David McCullough, you big geek. 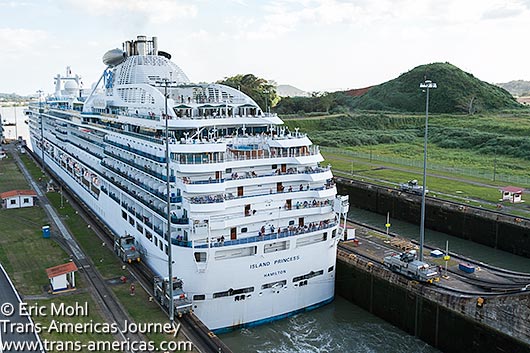 Bonus: here’s our guide to Panama Canal hotels including in an abandoned US Army Radar Tower turned into a hotel on the banks of the canal and in Panama’s only houseboat hotel, right on canal waters. And don’t miss our story about all of the ways to explore the Panama Canal for Shermans Travel.