Soaring condors, archaeological sites, tempting hot springs, and living Indigenous culture make the Colca Canyon a top adventure travel destination in Peru. Here’s how to make the most of exploring the Colca Canyon. 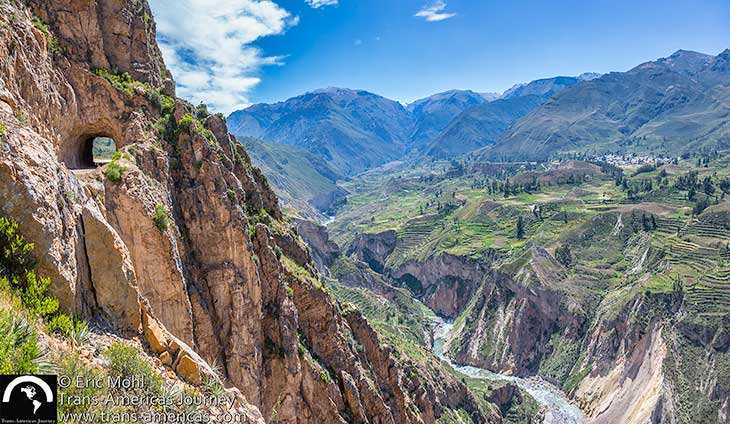 View of the Colca Canyon from one of the many viewpoints along the way. Note the tunnel that the road passes through on the left.

Exploring the Colca Canyon in Peru

After the very dramatic drive from the city of Arequipa, the highway drops down into the town of Chivay and the Colca Canyon unfurls from there. Many people make the ramshackle town of Chivay their basecamp, but it did not appeal to us. The hotels and restaurants in Chivay were mediocre and overpriced and the town was hectic with only occasional glimpses of the canyon’s culture (mostly in the form of cheap “handicrafts” for sale as souvenirs). 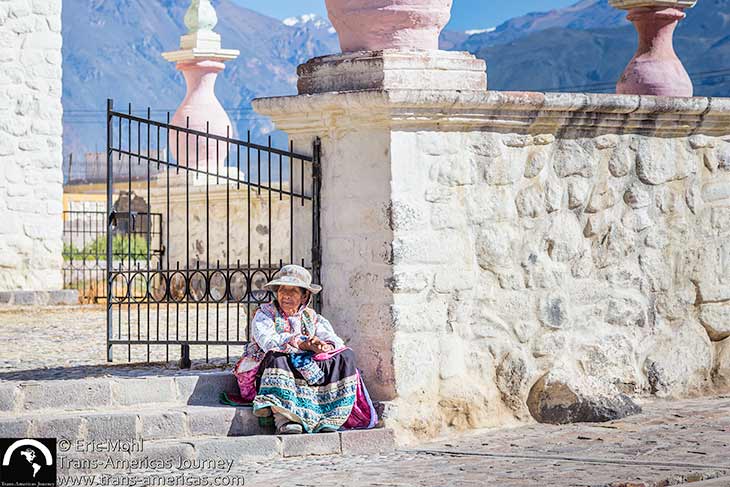 A traditionally-dressed woman rests on the steps of the church in the village of Maca in the Colca Cayon.

Be sure to stop at the “toll” station on the highway from Arequipa as it enters the valley just a few minutes before the town of Chivay. This is where all foreign visitors must purchase a  boleto turistico. This tourist ticket costs 70 soles (about US$21) and is valid for one week (though nobody checked the date on ours when we left). The ticket is an impressive souvenir and many people squirrel it away in their luggage right after they receive it. However, you can be asked to show your boleta at any time, so carry it with you. 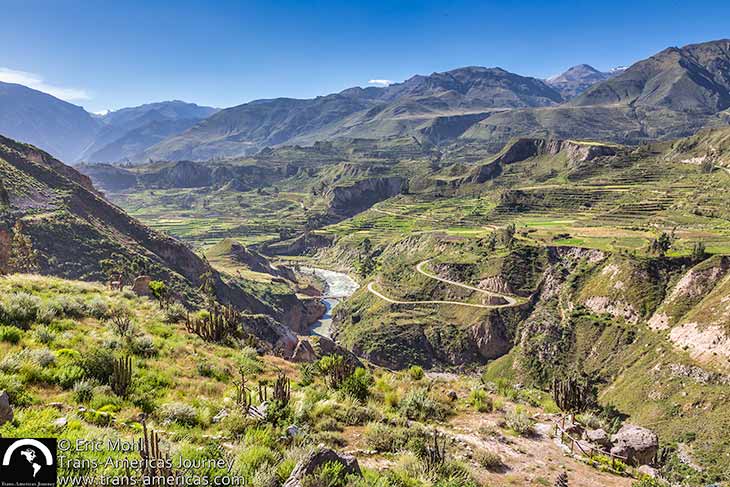 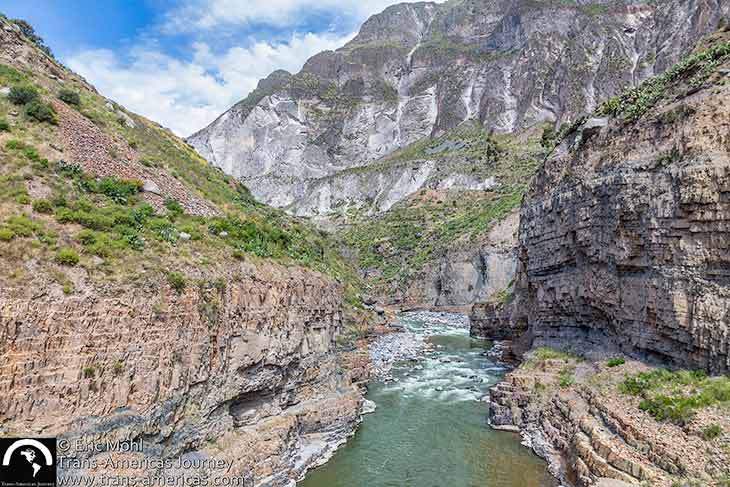 The Colca River passing through a section of the Colca Canyon.

It’s easy to think of the Colca Canyon as nothing but dramatic landscapes, wildlife, and open spaces. There’s plenty of that, however, there’s also a surprising number of people and towns on both sides of the canyon and each one has a church. 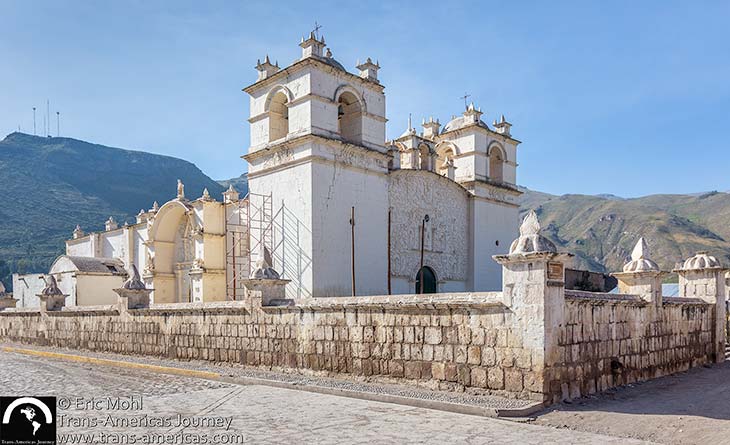 The Immaculate Conception church in the town of Yanque dates back to the 18th century.

Tiny Yanque does not have much in the way of food or gas or services of any kind. However, the town does have a small museum on the main square, a stone bridge, public hot springs, and the intricately carved Immaculate Conception church which dates back to the 18th century.

Some of the simple but picturesque churches in the towns and villages in the Colca Canyon.

While exploring the Colca Canyon we visited many of the 17 surviving towns and each one had a simple but picturesque church. 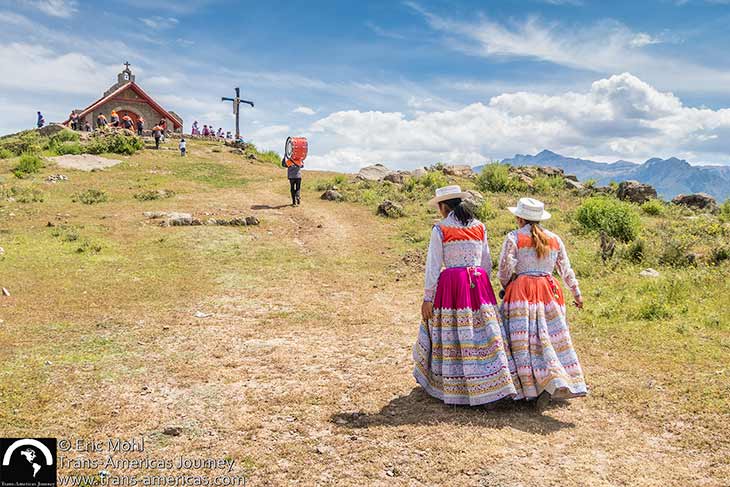 Dancers and band members walk up to a church above the town of Cabanaconde during a music video shoot.

Many travelers stay in the larger town of Chivay, but we chose to make Cabanaconde our base camp in the canyon. This small town has a slightly hippy vibe, passable hostels (we stayed at the clean and welcoming Pachamama Hostel), a few simple restaurants (we ate at a simple place on the main square called Sol y Sombra). Bonus: If you’re going to go hiking in the Colca Canyon (like we did), the trailhead is just outside of town. 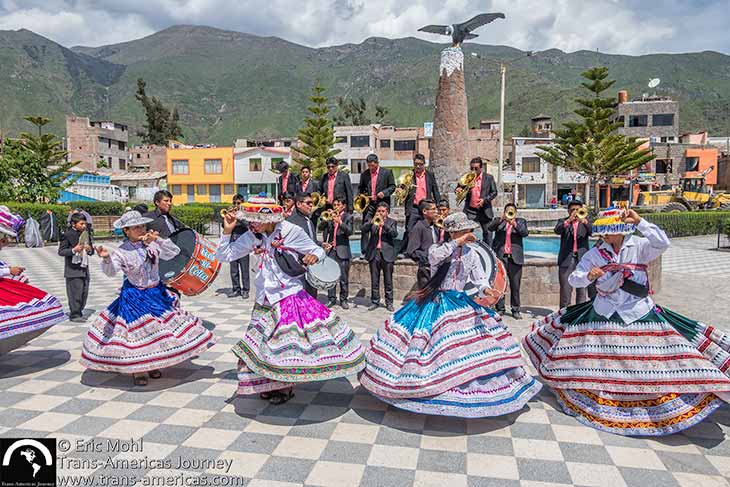 Another bonus of staying in Cabanaconde is the chance to see the living culture of the Indigenous Cabanas people who live in the canyon. Many of the women we saw in and around Cabanaconde were wearing traditional intricately embroidered shirts and skirts all topped off with a stiff white hat. 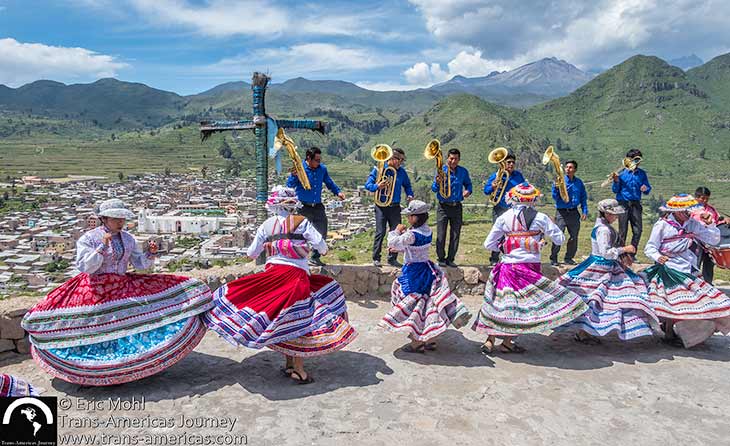 The band and the dancers during the music video shoot above the town of Cabanaconde.

When we were in town our timing was just right because a band was there shooting a music video featuring a troupe of dancers performing the Wititi dance which was named an Intangible Culture of Human Heritage by UNESCO in 2015.

See this dance for yourself in our video of Wititi dancing in Cabanaconde, below.

The dance troupe featured in the music video were wearing very fine examples of their traditional dress which includes skirts for both men and women. The men are differentiated by their fringed hats. 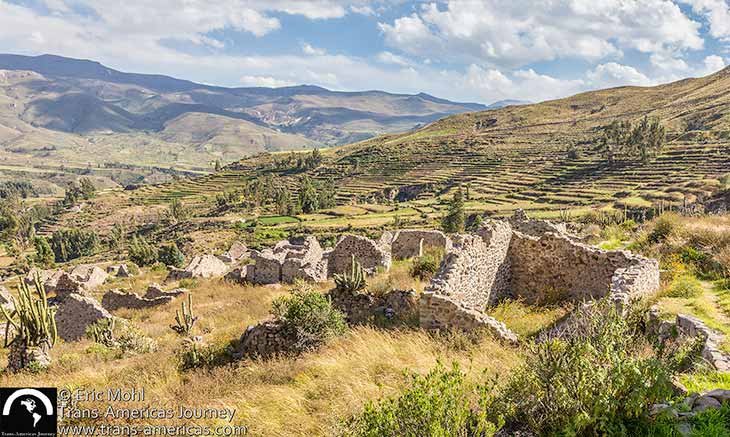 Structural remains at the Uyo Uyo archaeological site in the Colca Canyon.

Closer to Chivay and Yanque you’ll find the Uyo Uyo archaeological site (entry is included with your boleto turistico). This pre-Incan site is the largest in the canyon and was created by the Collagua civilization then later occupied by the Inca. The highlight of this archaeological site is the chance to see some of the stone storage buildings (called colcas) for which the canyon is named along with what remains of some houses. 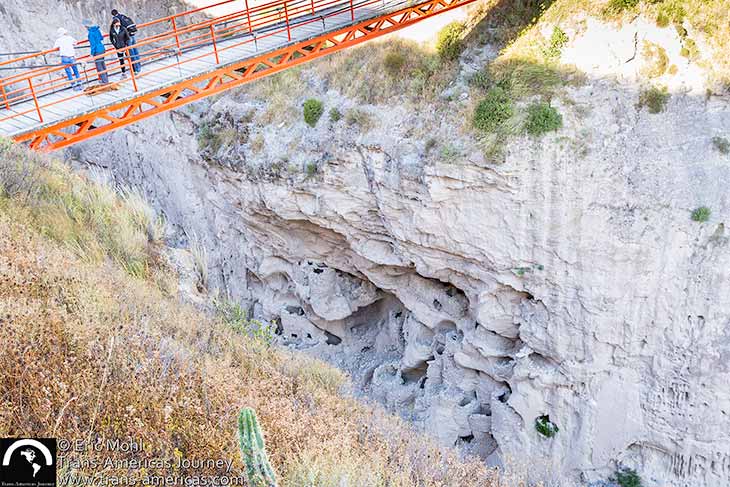 Your best view of the Shininea tombs, which were carved into a cliff face in the Colca Canyon, is from this small pedestrian bridge.

Near the Uyo Uyo archaeological site, you’ll find the Shininea tombs. These tombs are carved into a cliff face along a very narrow section of the Colca River. They can be a bit hard to spot and your best views are from a small pedestrian bridge. 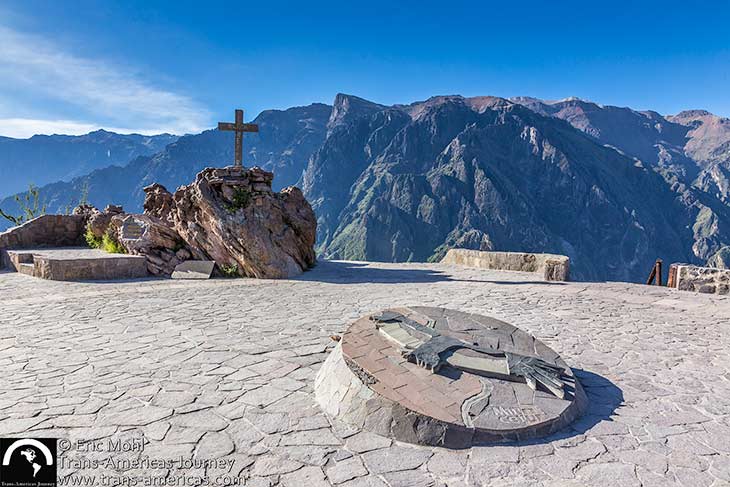 The Cruz del Condor viewpoint is a must stop in the Colca Canyon.

A visit to the roadside Cruz del Condor observation point is a must for anyone exploring the Colca Canyon because it’s your chance for virtually guaranteed sightings of endangered Andean condors. 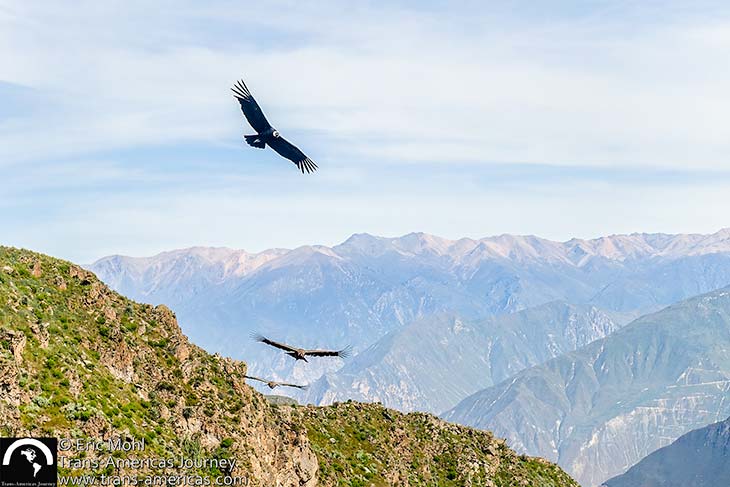 Just three of the many endangered Andean condors that we saw from the Cruz del Condor viewpoint.

Try to time your visit for the morning–when the massive scavengers catch thermals to help them rise into the air from their cliffside nests–and/or in the afternoon when they return to roost. We had great success with sightings here between 3 and 4 in the afternoon. 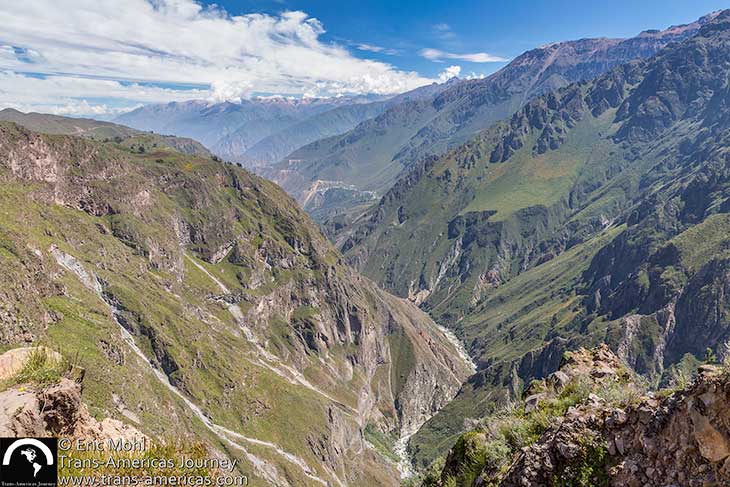 Thanks to so many volcanoes and so much geothermal activity in the region, there are many natural hot springs in the Colca Canyon. 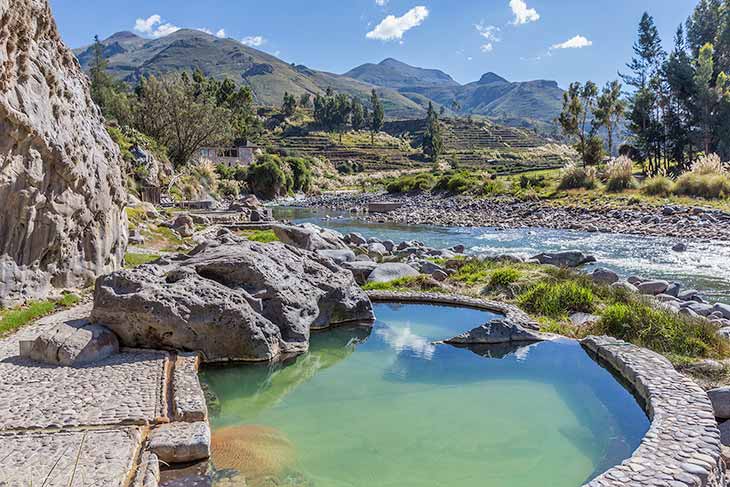 One of the natural hot spring pools at Colca Lodge, Spa & Hot Springs.

The simple Termales Chacapi, about a mile outside the town of Yanque, has changing rooms and a variety of steaming pools on the edge of the Colca River where you can let the mineral-rich water work its magic. There are also public hot springs near Chivay, including Termales La Calera. The most luxurious hot springs experience can be had at Colca Lodge, Spa & Hot Springs where four enticing riverside soaking pools have been built.

There are also at least three zip lines operating in the canyon and many operations also offer horseback riding. 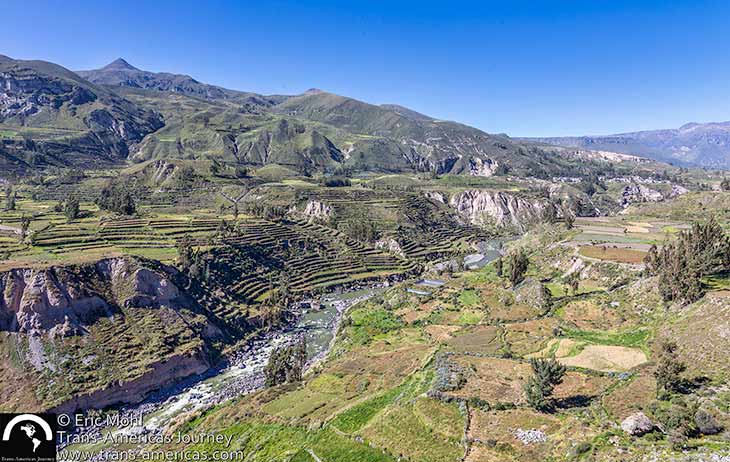 Another view of the Colca Canyon.