Fernandina Island, in the Galapagos archipelago, is home to tens of thousands of marine iguanas, a very active volcano, flightless cormorants, and awesome deep water snorkeling. We visited this classic Galapagos destination twice and it remains one of our favorite adventures in the Galapagos Islands in Ecuador. 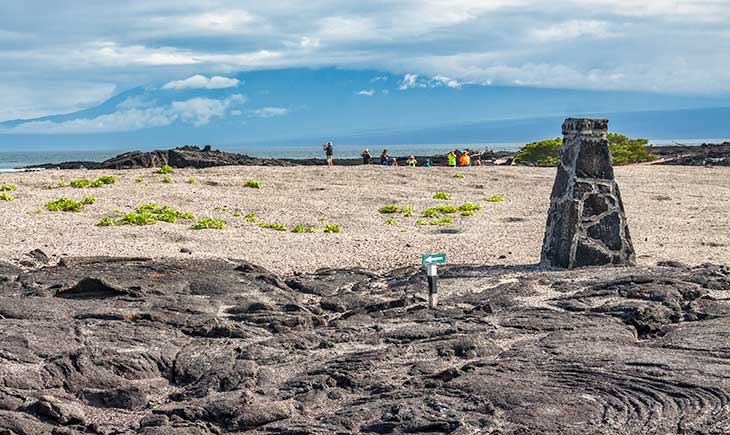 Fernandina Island is the youngest island n the Galapagos archipelago in Ecuador so there’s still a lot of lava around and very little soil.

Highlights of Fernandina Island in the Galapagos

Fernandina Island, aka Narborough Island, is the westernmost and youngest island in the Galapagos archipelago which was designated a UNESCO World Heritage site in 1978. Fernandina is also home to the La Cumbre Volcano which began erupting again in 2005 and is still at it, prompting Nasa to call La Cumbre the most active volcano in the Galapagos. Add in almost overwhelming numbers of marine iguanas, one of the few chances to see flightless cormorants up close, and a coastline that seems custom-built for snorkeling and you’ve got one very popular Galapagos destination. 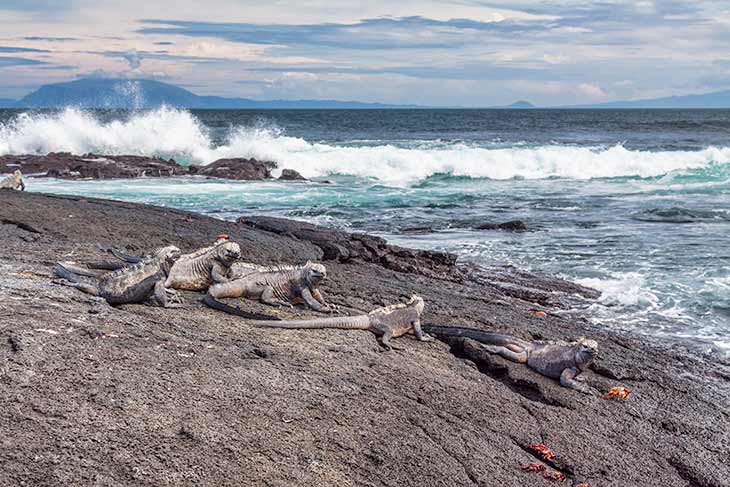 Marine iguanas, which are land iguanas that adapted to forage in the sea, are the stars of the show on Fernandina Island.

Fernandina is too far from Santa Cruz Island or San Cristobal Island for day trips. Therefore, the only way to visit this spectacular place is as part of your itinerary on multi-day cruise boat trips. We visited Fernandina Island during week-long trips onboard the M/Y Grace with Quasar Expeditions and during our trip on the M/V Eric with Ecoventura. 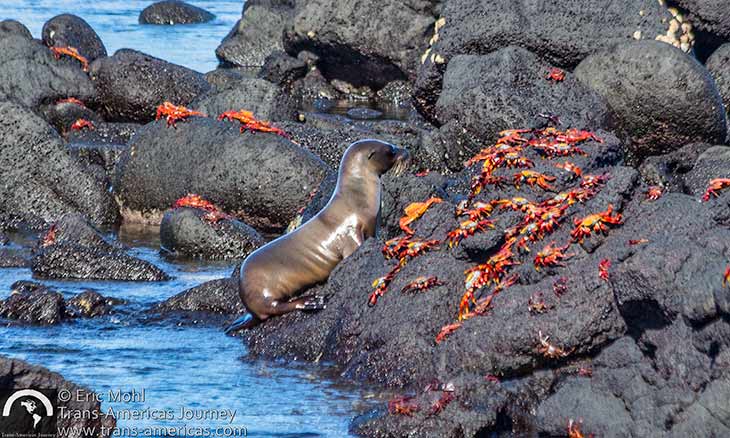 The landing point on Fernandina is called Punta Espinosa. Here, visitors make a dry landing on a makeshift set of steps that lead to a concrete walkway where it is immediately clear why experts believe this island has the largest concentration of marine iguanas on the planet. 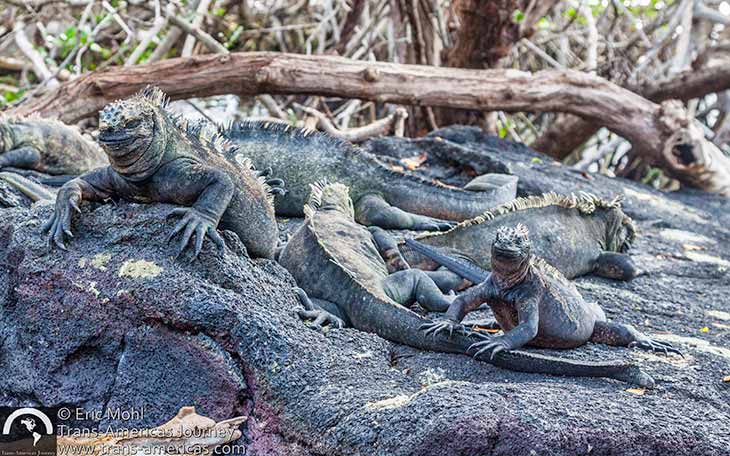 Just a few of the marine iguanas which cluttered the walkway through mangroves near the Punta Espinosa landing point on Fernandina Island.

During both of our landings at Punta Espinosa, the dock and short trail through mangroves were pretty much covered by marine iguanas. 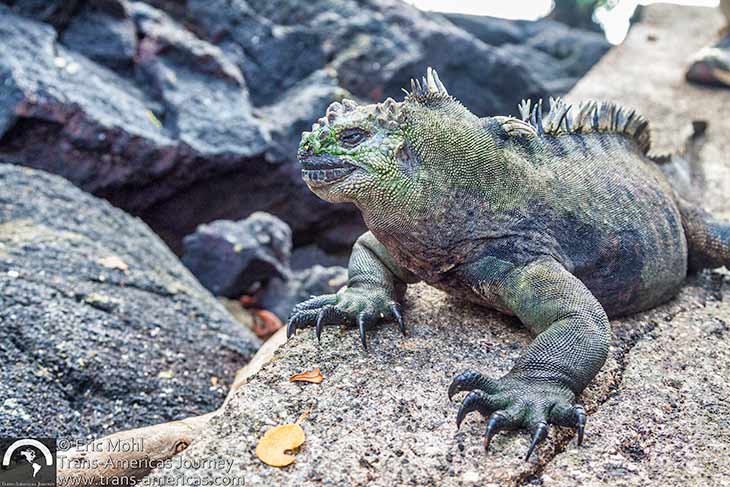 Those creatures are part of a much larger colony on Fernandina where this species gets huge–much bigger than the dainty specimens we’d seen on other islands. The sandy interior of Fernandina Island is totally off-limits to tourism because that’s where the marine iguanas nest. Our guide told us that it’s estimated that there are nearly 30,000 marine iguanas just on the small portion of the island where tourism is allowed and we could see them (and smell them) everywhere we looked. 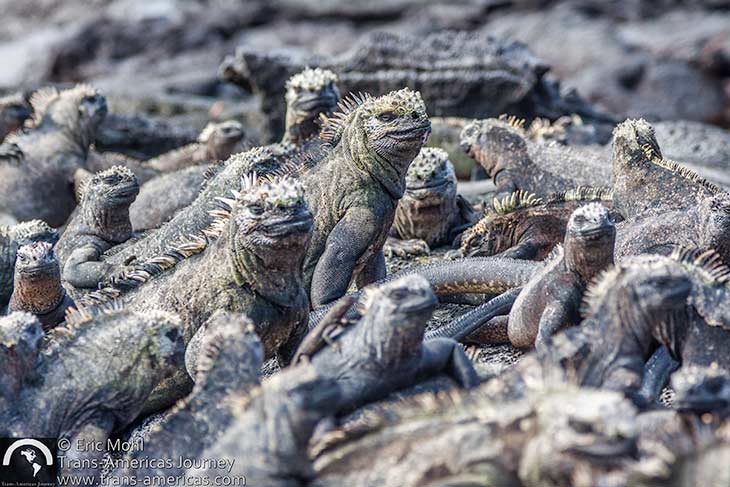 Marine iguanas number in the tens of thousands on Fernandina and they seem to be everywhere you look.

We picked our footfalls carefully as we walked inland from the landing point to the perimeter of a lava-covered point with small coves. As the temperature warmed up, so did the iguanas who began rousing themselves. A few males began head-wagging and forehead thumping (our guide explained that the sturdy, short spikes on the males’ foreheads evolved for this macho show of force). Soon, some marine iguanas were warm enough to enter the cold water on the hunt for breakfast, aka algae. 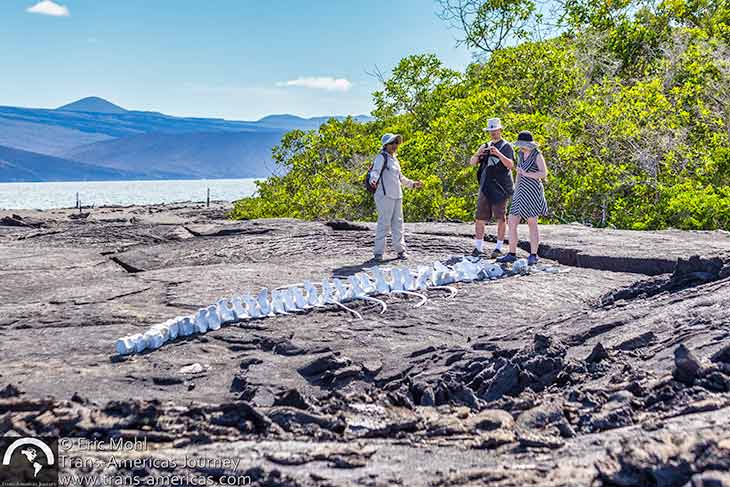 A sun-bleached whale spin on Fernandina.

While the marine iguanas are clearly the star of the show on Fernandina, we did see other uncommon things during our visit including a sun-bleached whale spine that looked like a sculpture. 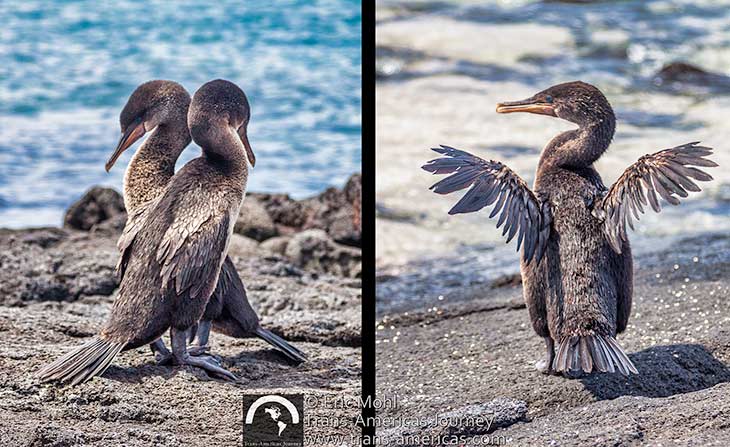 Fernandina Island is one of the few destinations in the Galapagos where up-close sightings of flightless cormorants are pretty much guaranteed.

And Fernandina Island is also one of the few places in the Galapagos where travelers can see flightless cormorants. We saw many of them while on the island and most were so busy courting and preening that they didn’t seem to notice us. 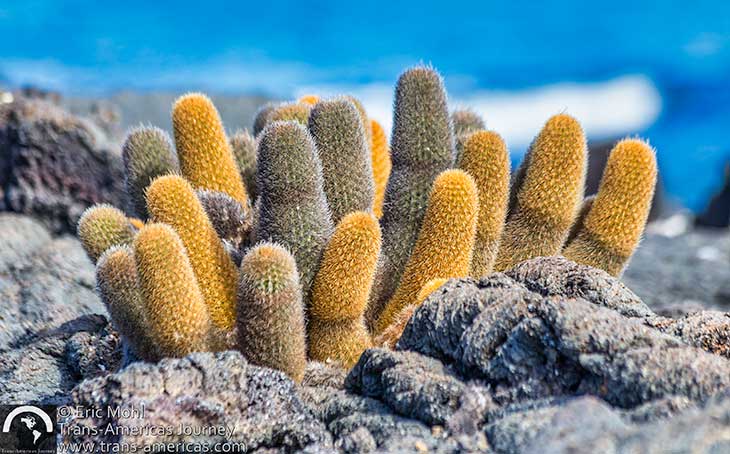 It will be a long, long time before soil develops on Fernandina Island, however, lovely lava cactus has found a way to grow on the island anyway.

Fernandina is considered one of the “new” islands which means it’s still mostly covered by hard lava that has not broken down into soil. The lack of soil means there isn’t much plant life on Fernandina yet, but we did see lovely examples of lava cactus which is a hardy early colonizer on the island. 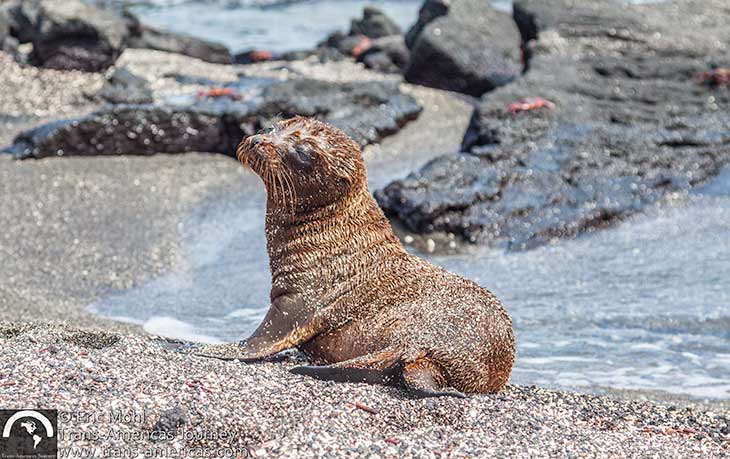 While on Fernandina we also had the chance to watch female Galapagos sea lions and pups play in warm, shallow pools of seawater. Karen managed to attract the attention of one pup by mimicking a sea lion call. The little thing scampered to within a few feet of her before deciding she probably wasn’t its species.

See Karen’s interaction with the sea lion pup and much more in our Galapagos travel video from Fernandina Island, below.

Here are more photos from Punta Espinosa on Fernandina Island in the Galapagos. 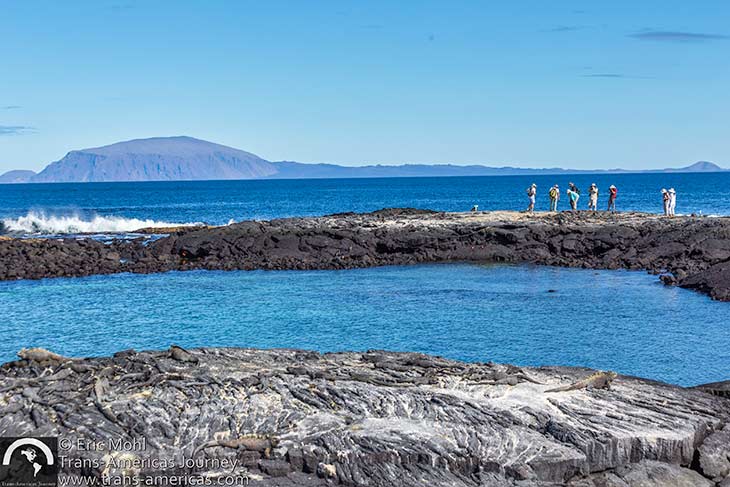 Tourists on Fernandina with Isabella Island in the distance. 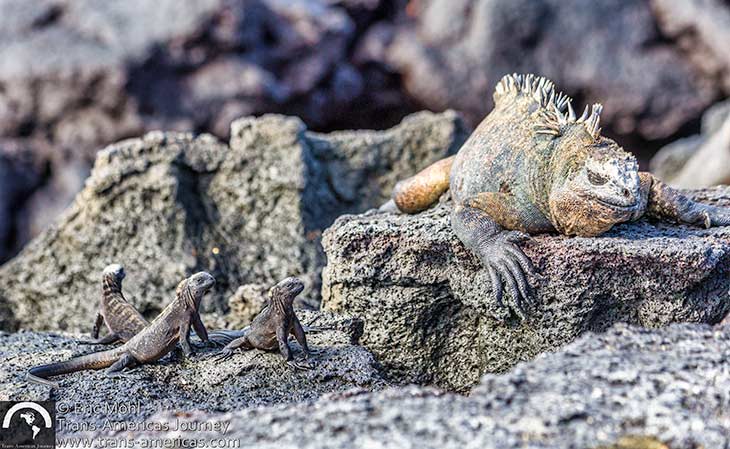 Don’t miss the three juvenile marine iguanas in this shot. 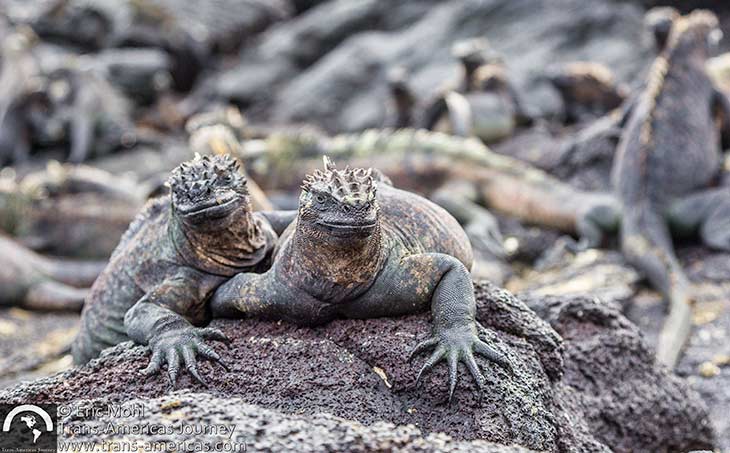 Fernandina Island has the largest concentration of marine iguanas on earth. 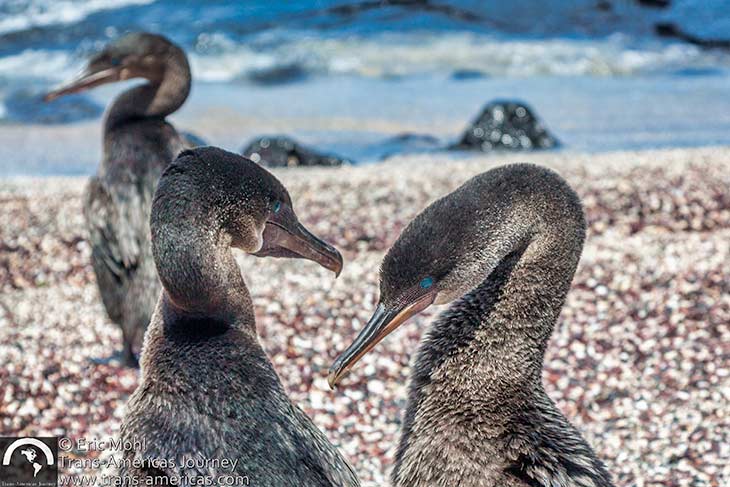 Flightless cormorants up close on Fernandina. 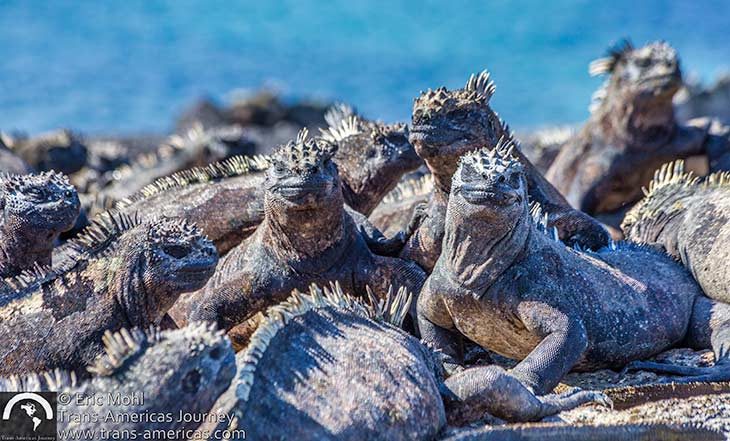 Marine iguanas warm up in the sun before braving the cold water in search of the algae they live on.

With nothing to eat on land, marine iguanas adapted to be able to swim, dive, and graze on algae. 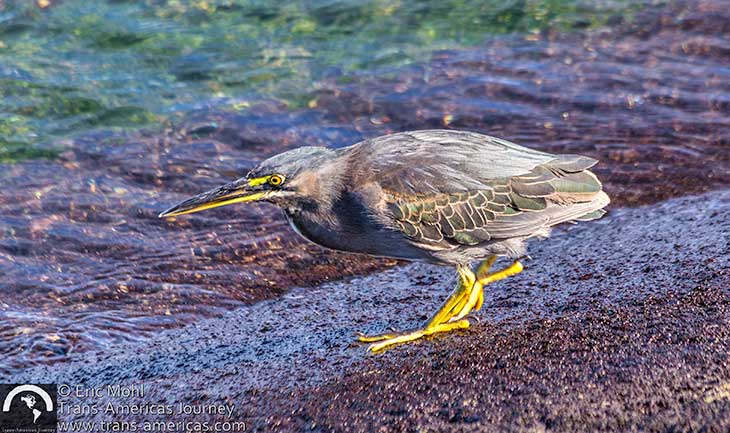 A lava heron on Fernandina. 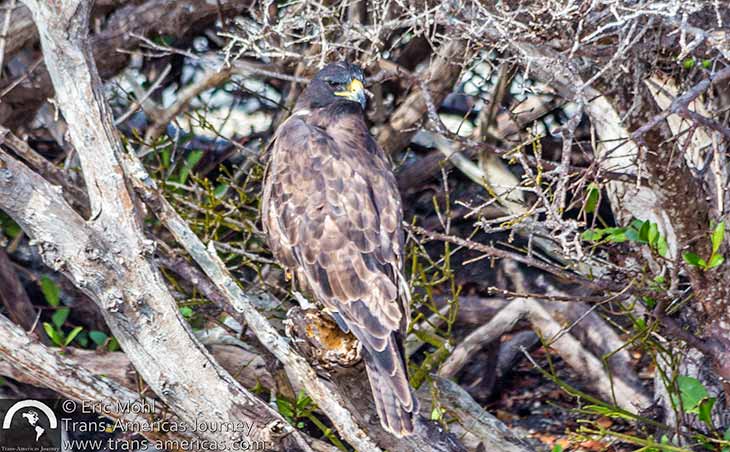 A Galapagos hawk on Fernandina. 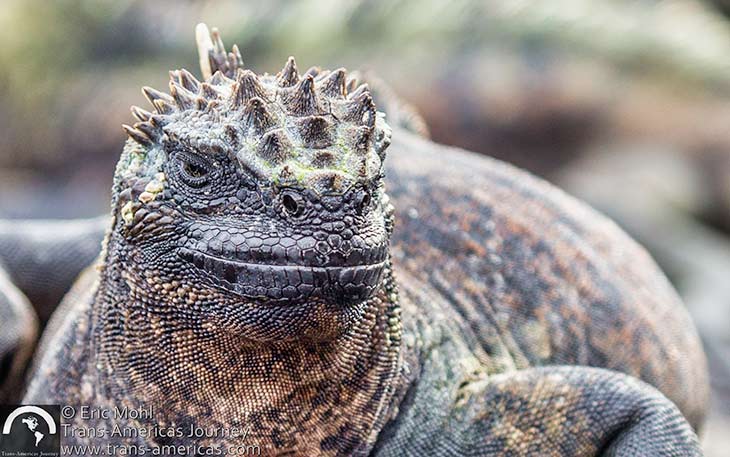 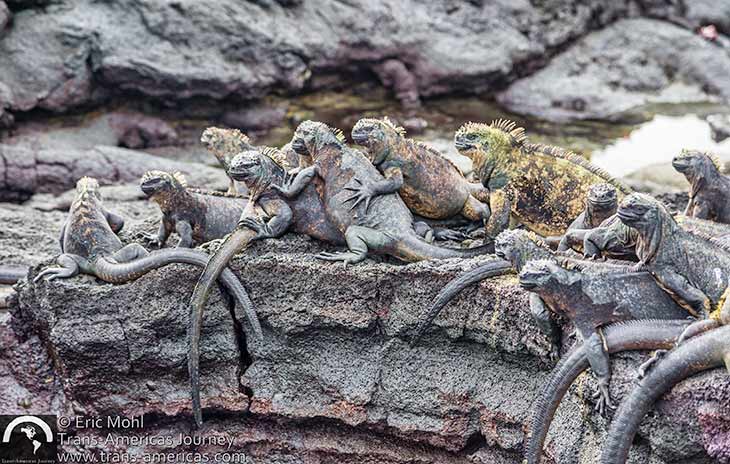 A marine iguana colony, including a large male, on Fernanadina.

The coastline of Fernandina offers coves and rocky surfaces with a quick drop off to deep water that makes it a gold mine for snorkeling. A pleasant surge gently pushed and pulled us as we finned slowly to observe bright green urchins, good soft coral, and schooling fish. We also saw green sea turtles and a very big sea lion dramatically surfaced from under Eric. 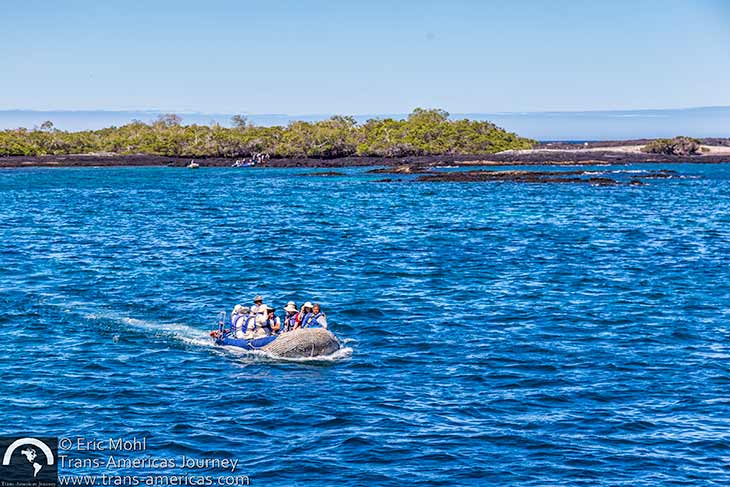 Zodiacs ferry passengers to and from the Punta Espinosa landing on Fernandina Island.

And what a pleasure to be able to watch the marine iguanas underwater where they swam like sea snakes using their long tails to propel themselves quickly through the water. Their massive claws are used to hold onto rocks where they grazed on algae. Our guide told us that marine iguanas can stay under for up to an hour thanks, in part, to the fact that their heartbeats slow to just one beat every 15 minutes when they dive. 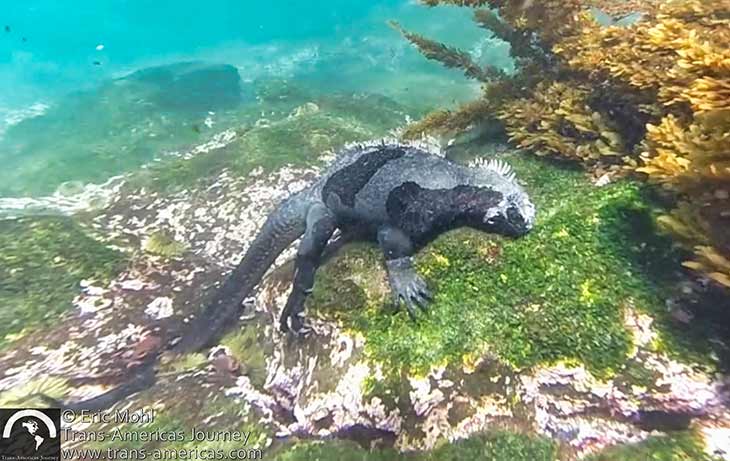 While snorkeling around Fernandina, we were able to watch marine iguanas swimming and grazing underwater.

As Karen bobbed in the surge, a massive marine iguana slowly, calmly rose through the water and surfaced right in front of her. They stared at each other for a moment before the iguana flicked its powerful tail and swam elegantly away. We really wanted to see the flightless cormorants fishing underwater so we could see them using their useless wings as very effective fins, but we spotted any of those birds underwater.

Pro tip: the water here can be colder here than in other snorkeling locations around the archipelago thanks to the presence of the Cromwell Current. Even if you’ve been comfortably snorkeling without a wet suit in other spots, you may want one here

See more of the underwater wonders around Fernandina Island in our Galapagos travel video, below.