The Amazing Artisans Behind the Flower Festival – Medellin, Colombia

More than 600,000 flowers are used to create the spectacle that is the Flower Parade, a highlight of the annual Feria de las Flores Flower Festival in Medellin, Colombia. And that’s just for one parade! The total number of flowers used to craft elaborate displays, public art works, and more during this beloved event is probably closer to 1.5 million, and those flowers don’t drop from the sky and arrange themselves. Nope. A small army of growers and artisans are responsible for the blooming beauty and we visited a few of them during the hectic and exciting lead up to the Flower Festival. 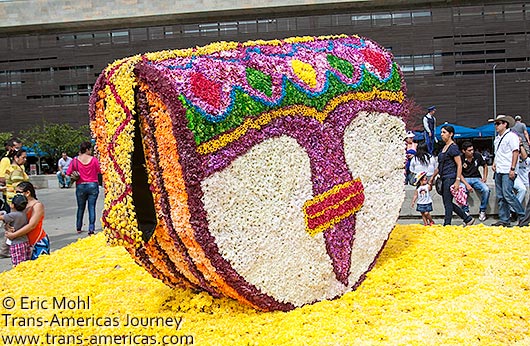 More than 600,000 flowers are used to make elaborate arrangements carried in the annual Flower Parade in Medellin, Colombia and many thousands more are used to make displays, like this enormous traditional carriel bag, which pop up around the city.

Colombia ranks second behind Holland in global flower exports and the sprawling, sparsely populated mountain town of Santa Elena is part of that industry. Though technically within the sprawling city limits of Medellin, Santa Elena is worlds away with its provincial vibe, agricultural core, and country atmosphere.

Fruits and vegetables are also grown in this fertile environment, but flowers rule. We were told that the arrangements that are carried by paraders, called silleteros, in the Flower Parade must contain a minimum of 15 different varieties of flowers. This helps explain the diversity you can see being grown in Santa Elena. 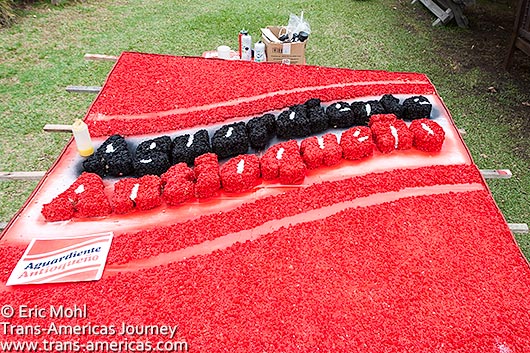 We watched an artisan in Santa Elena put the finishing touches on a corporate arrangement portraying the logo of Antioqueno Aguardiente, the region’s beloved fermented sugar cane booze…

The fourth category pays the bills and many artisans in Santa Elena make arrangements which depict corporate logos. We watched a man put the finishing touches on an arrangement for Antioqueno Aguardiente, the region’s beloved fermented sugar cane booze. 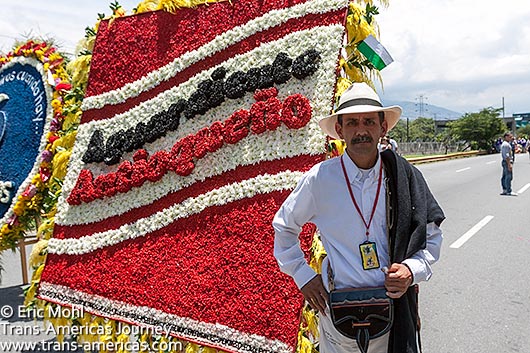 …then we saw a silletero carry the finished product in the Flower Parade.

Growing and arranging flowers for local sale and for the annual Flower Festival is such an important part of Santa Elena’s existence that the town square has a huge statue commemorating floral work. 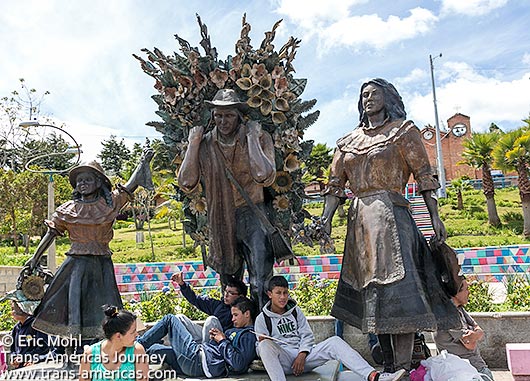 This statue in the petite main plaza of Santa Elena honors flower growers, arrangers and silleteros. 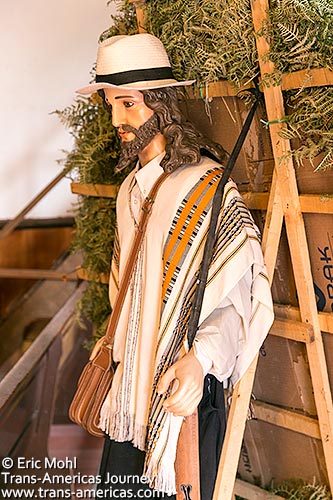 During the annual Flower Festival, even Jesus becomes a silletero in Santa Elena.

Meeting the most charismatic flower farmer in Colombia

Directions to Don Aristedes’ Finca Chagualo (named for a common type of tree in the Santa Elena region) go like this: “Turn right at the second phone booth then turn left at the big cedar tree.” The two-wheel-drive vehicle we were in (not our truck) couldn’t get up the steep and rocky final driveway to the finca so we walked the last bit past a large mora  (blackberry) field. This turned out to be the best way to approach the finca because we rose slowly up the steep hill with ample time to take in the expanding view and quickening breeze. 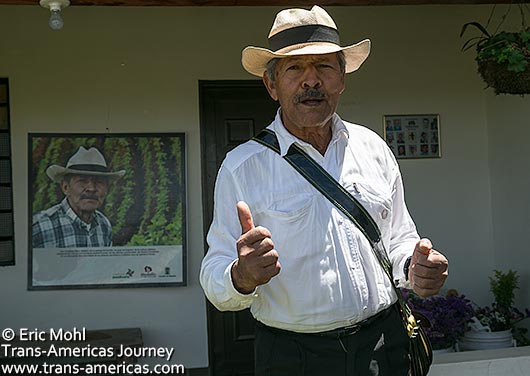 Don Aristedes in front of his finca (and the Colombia tourism poster with his face on it) in Santa Elena in full silletero garb.

And then there was Don Aristedes, regal in his traditional silletero garb: black pants, white shirt, Panama hat, cloth shoes like espadrilles, and the gorgeous carriel bag made from black patent leather, cowhide and colored thread. 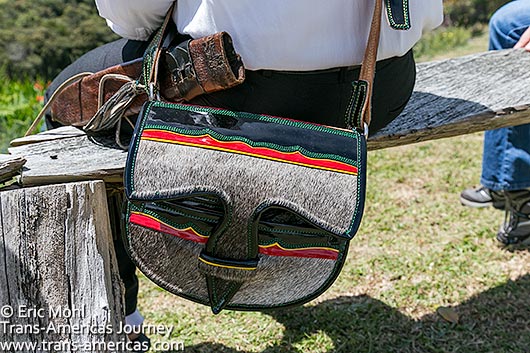 The traditional carriel bag is as essential to a silletero as the flower arrangement he’s carrying.

Don Aristedes’ rustically stylish and meticulously kept home is modest as is his flower farm. His personal pride, however, was eveident as he showed us around. He has participated in 47 Flower Parades, once with a broken leg injured when a large milk jug fell on it. He’s never won an award and he says that’s not his goal. He does it for the tradition and his main job is to grow flowers year round in plastic-covered greenhouses on his property. 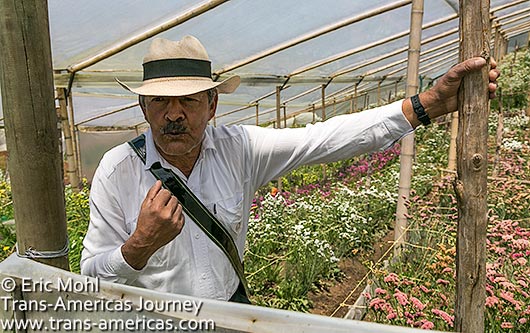 Don Aristedes in one of the greenhouses on his property where he grows flowers year round, not just for the annual Flower Festival.

One small room in Don Aristedes’ home has been turned into a museum of Flower Festival history and traditions. His greatest pride and joy is a decades old artesenal silleta made from fine wood that’s been hand rubbed and rounded into a piece of art. It’s not at all like the silletas which are mass produced today out of cheap plywood and pine, which Don Aristedes called garbage which a sniff. 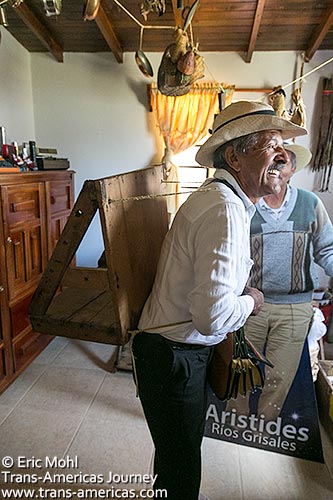 Tradition is paramount to Don Aristedes and here he carries his beloved silleta, a rare example of true crafstmanship and top materials in a world where they are now mostly cobbled together using flimsy, cheap wood.

Don Aristedes says silleteros have a responsibility to represent the proud face of the Antioquia region (of which Medellin is the capital) to the world. He is so good at it that his photograph appears on a Colombian tourism campaign poster and he has traveled around the world representing Colombia. 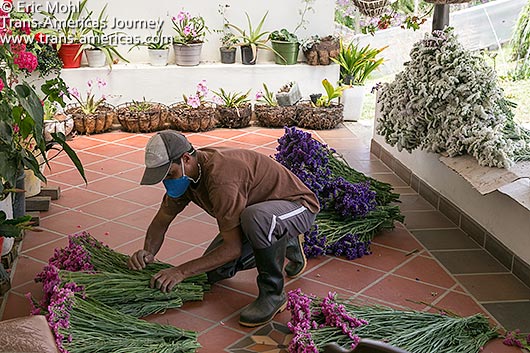 If you want to visit Santa Elena and meet Don Aristedes for yourself, contact Medellin City Services and book their half day (US$100) or full day (US$175) tour to the region. Both tours include a visit to Don Aristdes’ finca, a souvenir key chain, a regional beverage, a bilingual guide, and pickup and return to Medellin in a comfortable vehicle. The full day tour also includes a traditional lunch in Santa Elena and a visit to the town’s silletero museum. 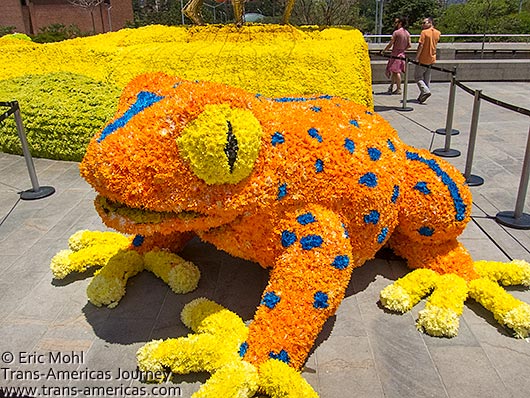 This enormous flower-covered frog appeared in Medellin during the 2014 Flower Festival. 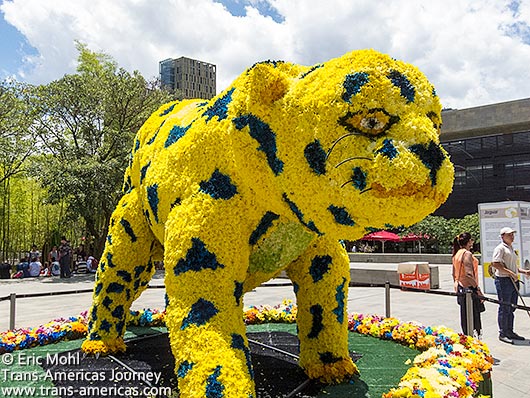 A technicolor leopard, decorated entirely in flowers, was part of the city displays during the 2014 Flower Festival in Medellin. 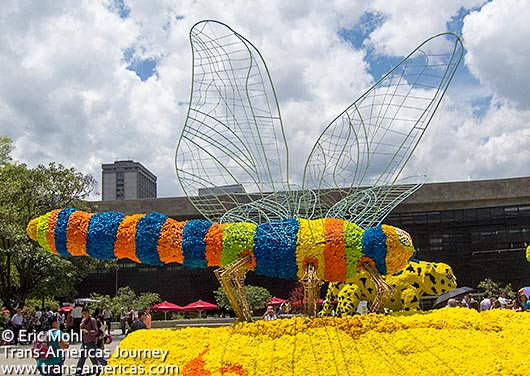 This flower-covered dragonfly dwarfed the people who came to see it in Medellin during the annual Flower Festival.

Every year the Flower Festival in Medellin brings in thousands of tourists and hotels fill up fast. During last year’s Flower Festival we managed to get a room at 61 Prado Guesthouse and we highly recommend it to any traveler who likes spotlessly clean and comfortable rooms at reasonable rates (US$35 for a private double room with bathroom) in a homey environment just a few blocks from Medellin’s famous metro system.
Book Now