Oh, those crazy Franciscan monks with their walking and their teaching and their building!  A collection of Franciscan missions in the Sierra Gorda near Querétaro, Mexico are the marvelous legacy of one particularly amazing friar. 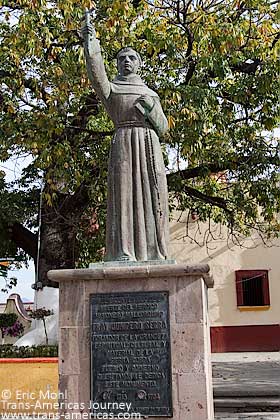 Junípero Serra, the Franciscan friar responsible for the proliferation of missions in Central Mexico, Baja, and what is now California.

Fantastic facades of the Franciscan Missions

Between 1751 and 1766, Franciscan friar Junípero Serra oversaw the completion of five Mexican Baroque missions near the city of Querétaro. The missions are stunning even today and were collectively declared a UNESCO World Heritage Site in 2003.

The facades are the thing with the Sierra Gorda Franciscan missions, each one displaying a different style and personality. They must have seemed like miracles in the 18th century. Friar Serra died in 1784 in Carmel, California. Yes, he walked that far. He was beautified in the late 1900s. 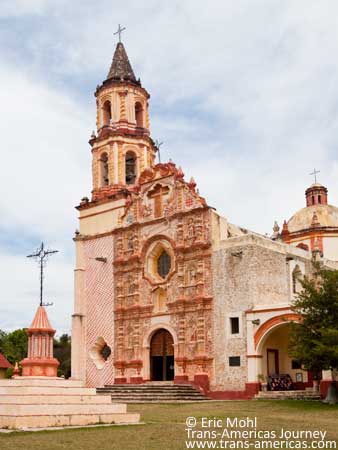 The 18th century mission  in Tancoyol.

While we knew that the facade of the mission in Tancoyol was carved out of stone, it somehow seemed soft, like sculpted marshmallow. Like all of the missions, the Tancoyol decor includes Christian symbols as well as symbols associated with the indigenous people living in the religion. Jaguars, some dude who looks like a member of the Olmec people, and St. Francis are all part of the Tancoyol mission facade which is the most elaborate of all of the missions.

The interior of the mission, by contrast, is perfectly plain. 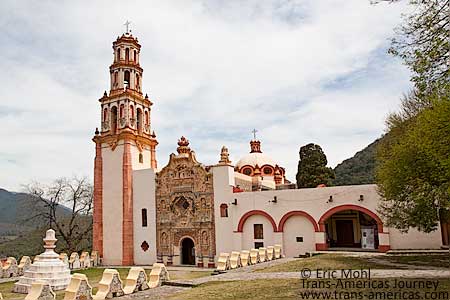 The 18th century mission in Tilaco.

The Tilaco mission has the smallest facade of the five missions and it looks like a page out of a storybook with fanciful depictions of mermaids and tasseled curtains and flowers. The village of Tilaco has a bit of a storybook feel to it as well with exceptionally well-planned and well-kept streets and neighborhoods. 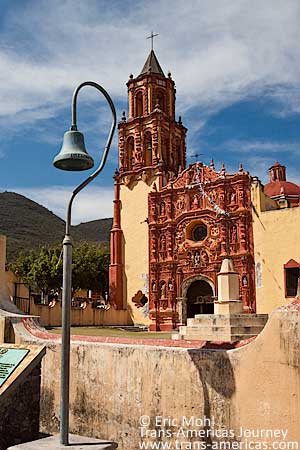 Anyone who’s been to a mission in California will recognize the bell and staff marker outside this 18th century mission in Landa.

The Landa mission, dedicated to the immaculate conception, has the darkest facade of the five missions and is bursting with saints: there’s Saint Peter, Saint Paul, Saint John of Capistrano Saint Stephen, Saint Lawrence, Blessed Alberto of Sarzana, Saint Vincent and Saint Michael the Archangel and we’re sure we’re missing a few. 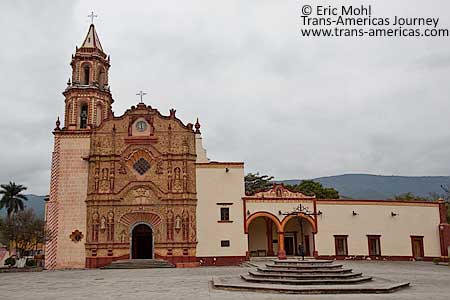 The 18th century mission in Jalpan.

Jalpan is the biggest town on the mission circuit and the mission here was actually constructed by Friar Serra (not just overseen by him). We liked the fact that the Virgin of the Pillar (Spain’s virgin) and the Virgin of Guadalupe (Mexico’s virgin) are carved on an equal level in the mission’s facade.  The facade also features Mexico’s official emblem: an eagle devouring a snake. 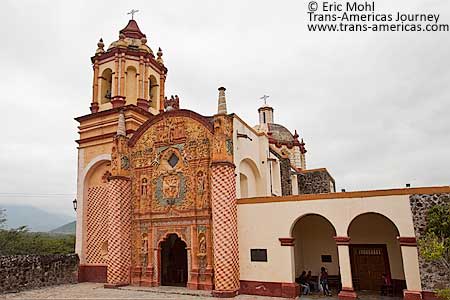 The 18th century mission in Concá.

The Concá mission was our favorite in part because the images on its facade are more organic, more indigenous and less dogmatic. Instead of a yearbook’s worth of saints, this mission presents fruits and vines and flowers. Okay, and a few saints…

The elaborate central facade of the 18th century mission in Concá.