9 Free Things to Do in Medellin – Medellin, Colombia

We kind of fell in love with the second largest city in Colombia because of the perfect weather and the Texas-sized attitude of the local Paisas. While Medellin isn’t exactly jam-packed with tourist attractions, there are a variety of things that travelers can do and see for free (or damn close) including art,dead people, and butterflies. Here are our 9 favorite free things to do in Medellin.

9 free things to do in Medellin, Colombia 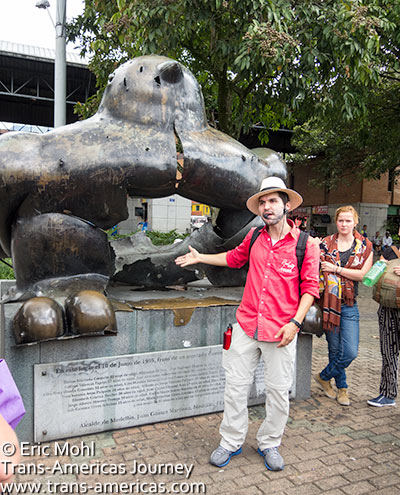 Real City Tours: Pablo Alvarez-Correa, 28, was born in Medellin. He trained as an engineer and traveled extensively before returning to the city where he started Real City Tours in 2013. Since then he’s been running an increasingly popular 4-hour free walking tour of Medellin twice daily Monday to Friday. The all-English tour is peppered with Pablo’s entertaining explanations of complicated elements of Colombian history and illuminating personal stories which bring historic and modern Medellin to life. Please tip as generously as you can. 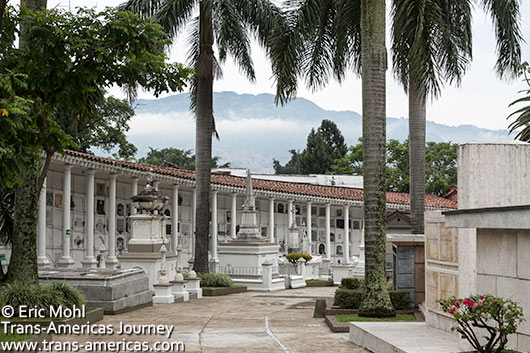 San Pedro Cemetery Museum: Not every cemetery is also a museum. Then again, not every cemetery holds the history of a city like Medellin’s San Pedro Cemetery Museum. Founded in 1842 as a cemetery for the elite, it grew over the years. In 1970 it was opened up for use by the general public and in 1997 it was designated as a museum, in part to protect the final resting place of some of the most important figures in Medellin politics, journalism, the arts and business including three former Colombian presidents.

The vast cemetery is free to enter (8 am to 2 pm) and features some lovely carving and statues, but its real value is as a one-stop-shop of the city’s history as told through the dead. To really understand that side of the cemetery you need a guide. We were guided by David Graaf who was working for Palenque Tours. David showed us some of the most famous graves in the cemetery, explained some of the statues and said that the cemetery is open on full moon nights when it hosts bohemian gatherings of students and artists. We noted a grave dating back to 1875, then it was time for more recent history.

In the 1980s and 1990s drug traffickers terrorized citizens of Medellin with random and brutal acts of violence that killed cartel members, police officers, politicians and innocent bystanders. As the drug business boomed so did the burial business. 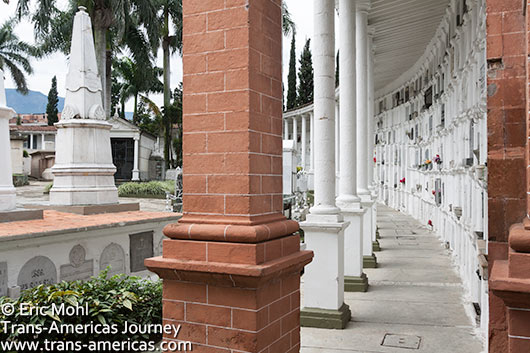 Pablo Escobar’s grave is not in the San Pedro cemetery, but some of his victims and associates are. One of the most memorable examples is mausoleum #17 marked Lilia. Here a mother has buried six of her sons. All of them were hit men (called sicarios) for Escobar’s Medellin Cartel. All of them were killed violently. The glass-fronted Munoz Mosquera mausoleum is lovingly arranged like a living room with a chandelier, side tables and an open bible. A radio used to be hooked up to an illegal electrical connection so it could play her sons’ favorite music (ranchera). Loudly.

An ironic factoid: Pablo Escobar allegedly got his criminal start by stealing marble gravestones. Though the bad old Escobar days are in the past, gangs still exist in Medellin and the San Pedro Cemetery can be a dangerous place when gang members are being buried due to a combination of heavy drinking by mourners and the occasional attack by rival gang members. This explains why visitors to San Pedro Cemetery are wanded for weapons before being let in. 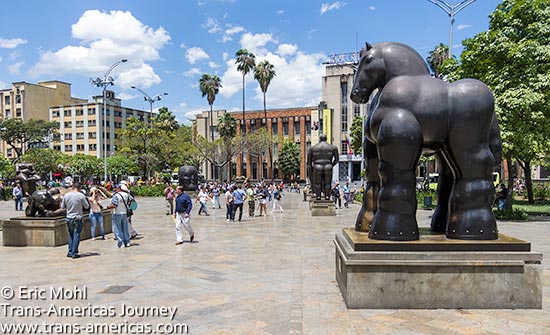 Plaza Botero: When an art world heavy hitter famous for enormous bronze statues is born in your city, well, you better make some space for his work. Plaza Botero in central Medellin is a huge, free, public outdoor space jam-packed with the 23 sculptures by native son Fernando Botero. Check out our photo essay of all 23 sculptures. 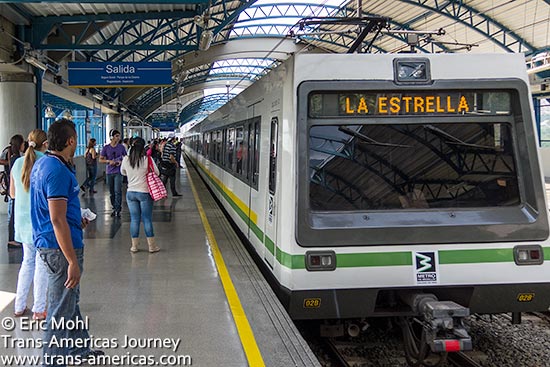 Clean, efficient, and nearly free, the Medellin’s Metro system is a winner in the city.

Medellin Metro: Residents of Medellin are proud of their metro system and they should be. It’s clean, civilized, safe, efficient and nearly free at just 2,000 COP (about US$0.70 per ride anywhere the lines go including the metrocables (see below). Construction of a new tram system called the Tranvia is being finished now and will service even more parts of the city. Two new metrocable lines are in the works too.

Encicla Medellin: Even cheaper than the metro is the Encicla network of city bikes at automated stands offering bikes that are free to use for up to an hour even for foreigners. Just register on the Inscripcion  section of the website by submitting a copy of your passport and you’re good to go. New stands of bikes and new bike paths are opening in Medellin all the time. 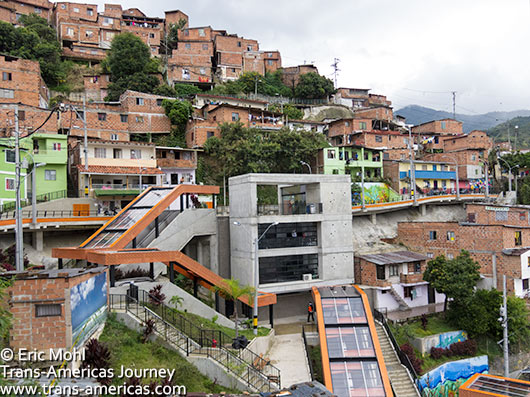 Medellin’s Escolaras de Comuna 13 take residents and travelers up into a hillside community above the city for free.

Escolaras de Comuna 13: In 2011 escalators that travel from the valley up through a poor community known as Comuna 13 were inaugurated in an attempt to ease the commute for more than 12,000 residents, reduce crime, and beautify the run down and often dangerous area. Escolaras de Comuna 13, which were built in six sections, replaced 350 steep, dilapidated stairs that residents used to have to navigate to get up and down the hillside. 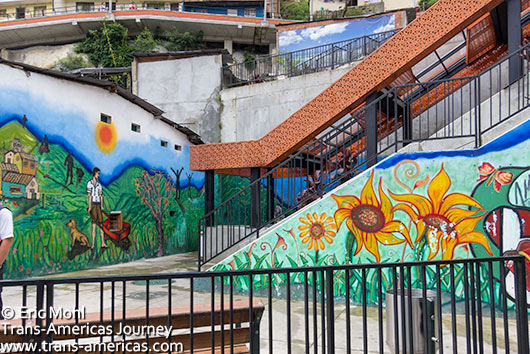 Murals with names like “The Wait”, “New Horizons” and “The Lovers” were commissioned from local artists to brighten up Medellin’s free Escolaras de Comuna 13.

About 1,000 riders a day use the free escalators and they’re mostly locals though travelers are welcome to make the journey too. Young local caretakers are stationed along the way armed with uniforms, walkie-talkies and information about the escalators and the community. We talked to Jose for a while and he told us that crime in the area has gone down because of the increased traffic and attention the escalators brought to the community. Most of the walls around the escalators have been painted in bright and creative murals with names like “The Wait”, “New Horizons” and “The Lovers” by local artists.

You may be told that the escolaras are not safe, however, we spent more than an hour traveling on them, taking photos, and talking to Jose and we never felt threatened. 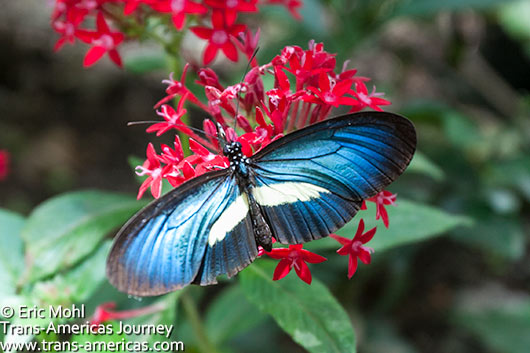 Inside the butterfly house in the totally free Joaquin Antonio Uribe Botanical Garden in Medellin.

Botanical Garden of Medellin: This is a true haven in the city. Opened in the late 19th century but expanded to more or less what you see today in 1972, the five acre Joaquin Antonio Uribe Botanical Garden of Medellin is home to thousands of species of plants and flowers and is totally free for anyone who want to enjoy the open-air orchid house, a butterfly house, a cactus garden, and peaceful paths and picnic areas right in the middle of the city. There’s also a very nice cafe with outdoor seating. 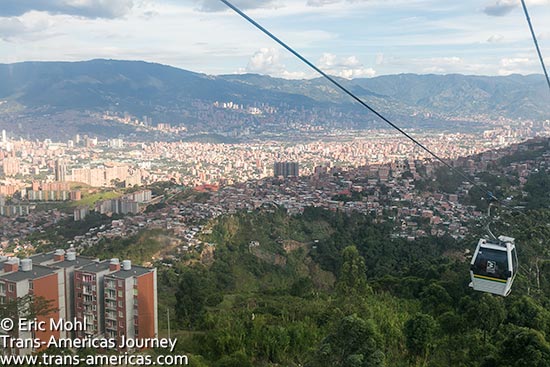 Take the Metrocable (free with your 70 cent Metro ticket) for the best views down on the city of Medellin.

Medellin Metrocable: In 2004 the city of Medellin inaugurated a system of aerial cable cars (like a ski lift without the snow) to provide transportation for residents of some of the poor communities that cover the hillsides around Medellin. The Medellin Metrocable, considered to be the first cable-propelled transit system in South America, also provides an exciting sight seeing ride with steep ascents and descents, spectacular views of the city below and an illuminating progression from developed city up into under developed areas and it’s free to ride up through the comunas if you’ve already purchased a Metro ticket.

Right now there are two Metrocable lines (J & K) that service several comunas. A third line (L) continues beyond the K line to Parque Arvi. The total length of the three Metrocable lines is 5.8 miles (9.3 km) Two new lines that are being constructed now will ultimately connect with the new Tranvia train line in the city.

Up above the comunas tickets are required to travel on the L line (4,600 COP or about US$1.50 each way) which climbs even more steeply over forested hillsides and small farms. Your final destination is Parque Arvi, a large mountaintop protected area that is free to enter and features free geared mountain bike rental (including helmets) through the Enciclia network that we already mentioned, hiking trails, picnic areas, babbling brooks, a handful of restaurants and even a small farmer’s market in front of the Metrocable station at the top of the line.

Get more in our complete Medellin city travel guide.