Until 2005, one of the tallest free-falling waterfalls in the world was unknown to anyone except the people living in the small village near the cascade. Today, the Gocta Waterfall is one of the most popular natural wonders in northern Peru and you don’t have to be a waterfall nerd to appreciate this stunner with an equally stunning back story. 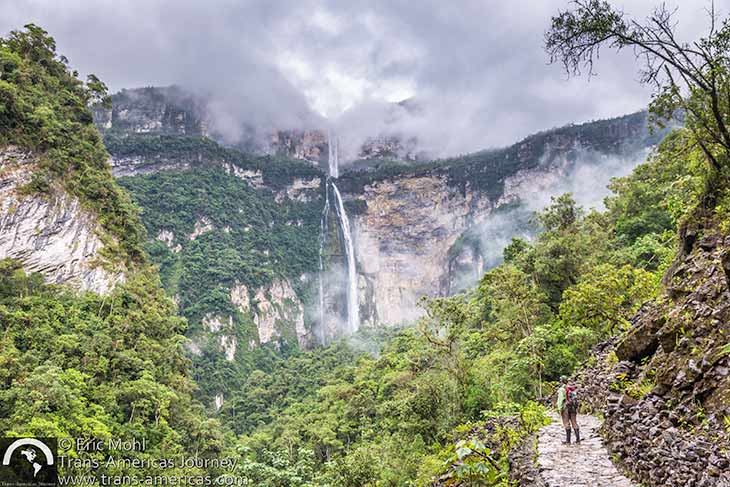 Karen on the trail to Gocta Waterfall in northern Peru.

By some calculations, the two-tiered 2,531 foot (771 meter) high Gocta Waterfall (called Catarata Gocta in Spanish), near the town of Cocachimba in northern Peru, has the fourth-longest free-falling waterfall drop in the world, which is to say it’s an impressive sight. So how could such a massive natural wonder remain so unknown for so long?

Residents of Cocachimba live within view of the waterfall, but superstitions lead them to believe that the waterfall was dangerous and few locals ever visited it or spoke about it. And because the town was not connected by road until 2007, few outsiders ever visited the area. That is until 2005 when a German named Stefan Ziemendorff went for a hike and stumbled upon a massive two-tiered waterfall that he’d never seen on any map. The following year, after returning to the waterfall with measuring equipment, Stefan announced that he’d discovered what became known as Gocta Waterfall.

To see this amazing waterfall for yourself, you have to hit the trail. 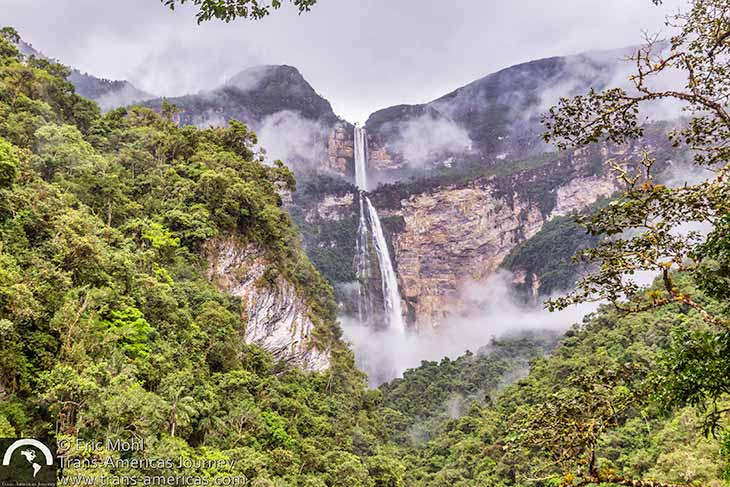 The two tiers of the massive Gocta Waterfall.

Hiking to the Gocta Waterfall

The town of Cocachimba is located at the head of a small valley and is ringed on three sides by sheer rock walls that are streaked with waterfalls, but none of them compare to Gocta. At the small community tourism office in town, we paid 10 soles (about US$3) per person for a ticket to enter the trail that leads to Gocta Waterfall. We were told that hiring a guide would also be necessary, but the local tourism officials said no guide is required. 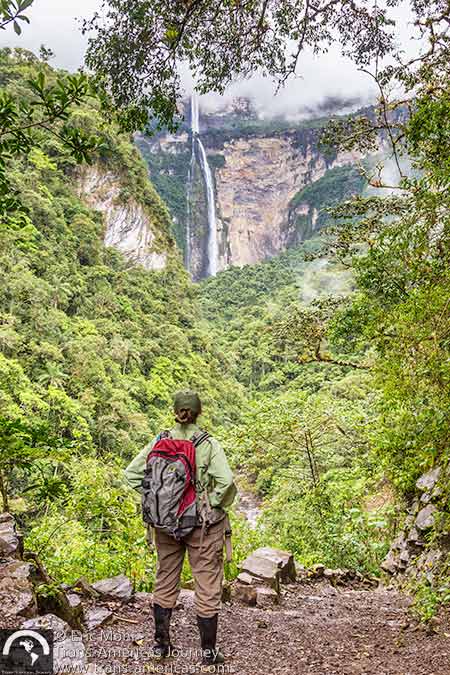 Karen taking a break on the trail to admire Gocta Waterfall. Note the rubber boots. This trail gets goopy.

The undulating dirt and stone trail is more like a very narrow road. There are a few steep inclines and a lot of moderate up and down along the way (6 miles/10 km round trip, allow at least 4 hours total at a moderate pace). The trail can get muddy and we recommend wearing good sneakers or hiking boots. We wore rubber boots. And bring plenty of water. 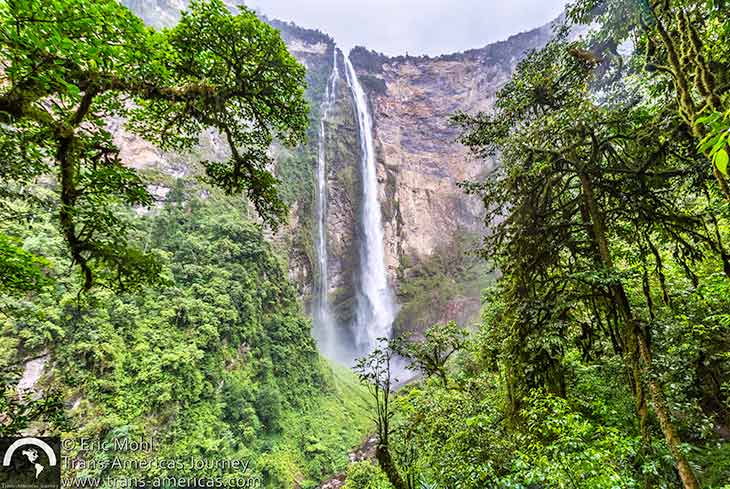 As the trail takes you closer to Gotcta Waterfall, the upper tier moves out of view and you can only see the lower tier.

Leaving town, the trail took us past small plots of yucca and coffee. About halfway to the waterfall, we entered dense, peaceful, wild cloud forest–perfect habitat for the spectacular and elusive national bird of Peru.

The national bird of Peru is called the Andean Cock of the Rock. It is a crazy looking thing, but not how you’re thinking. It’s also pretty rare and seeing one is not a guarantee, but we were on the lookout for them anyway. 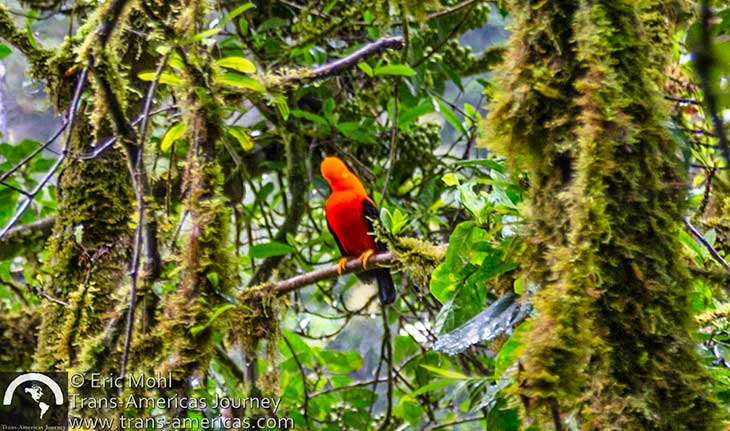 An Andean Cock-of-the-Rock, the national bird of Peru, in the cloud forest surrounding the trail to Gocta Waterfall.

Just after reaching the 2.5 mile (4 km) mark on the trail to the waterfall, we heard a really weird noise–like alien frogs. We stopped and looked around and soon saw a bright red flash in the forest. We hung around and looked and listened some more and then we saw three male Cock of the Rocks perched in the same tree just off the trail. The birds hung around for more than five minutes before flying off.

From that point on, the sound of the waterfall got more insistent. The closer we got, the louder it got and near the end of the trail, the falls created a sound like a jet in perpetual take-off mode–exciting and terrifying at the same time. There was also so much waterfall mist in the air (more like a light rain) that we turned back before reaching the very end of the trial.

Get an overview of Gocta Waterfall in our drone travel video, below.

On our way back to town we saw another Cock of the Rock alone in a tree around the 2 mile (3 km) trail marker. All told, we saw five different Cock of the Rocks on the Gocta Waterfall trail and our advice is to keep your eyes and your ears open. Even if you don’t see any Cock of the Rocks, the waterfall is awesome and the hike is very enjoyable.

Where to sleep near the Gocta Waterfall

The town of Cocachimba has a handful of budget accommodations, but it’s worth the splurge to book a room at the sleek and stylish Gocta Andes Lodge. 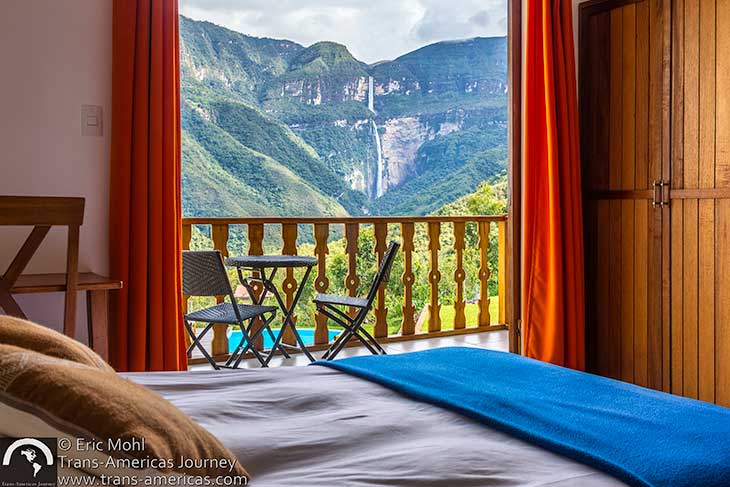 All rooms at Gocta Andes Lodge have views of Gocta Waterfall.

All of the 10 stylishly-simple rooms at Gocta Andes Lodge afford views of the cascade right from bed and the sound of the waterfall–like a distant drum circle–will lull you to sleep. Get a room on the second floor for more privacy so you can keep your curtains open all the time to maximize the view. 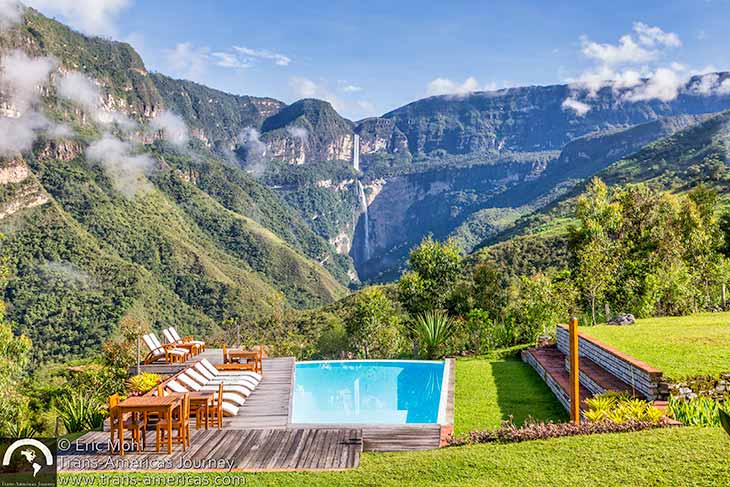 Even the pool at Gocta Andean Lodge has a view.

The hotel pool-with-a-view is refreshing, staff members are helpful, and the llama “gardeners” are adorable.