Nicaragua is not known for preserving the past. Granada, with its colonial architecture and cobblestone streets, is a rare exception to this rule. It’s often called Nicaragua’s most beautiful city and when we traveled to Granada we found a real looker of a city offering a glimpse of the past while steadily moving forward in its signature slow, steamy pace. Our Granada travel guide tells you how to make the most of it.

Granada was founded by the Spanish in 1524 which makes it, according to some, the first European city on mainland Latin America. The settlement was named after Granada, Spain and the Spanish used it as a more southerly seat of power in conjunction with Antigua, Guatemala. 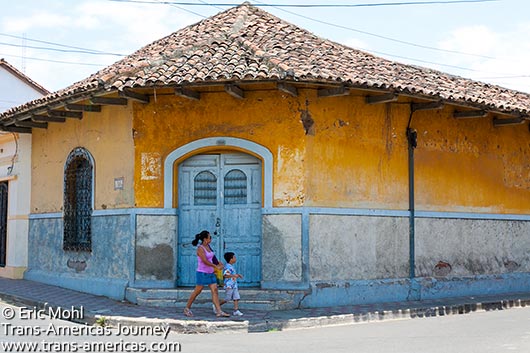 The colonial architecture of Granada, Nicaragua, like this typical house, is in various stages of restoration.

In addition to Spanish conquistadors, Granada has been invaded by the English, the French, the Dutch, and a whole bunch of pirates including Henry Morgan. The most bizarre interloper, however, came from the United States. 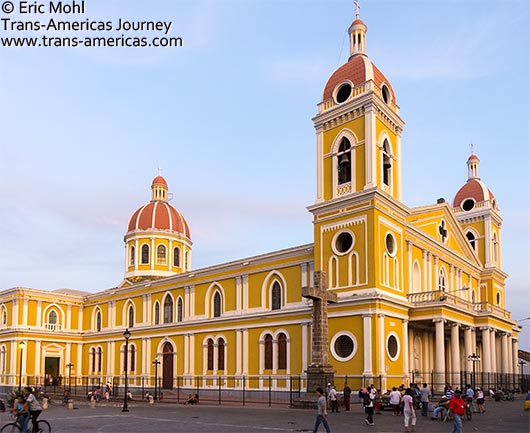 The main cathedral in Granada, Nicaragua is called the Antiguo Convento San Francisco and it was built in 1592.

If he were alive today, William Walker would probably have been a member of the Tea Party. Back in the mid-1800s he had to settle for the Filibusters (aka Freebooters) who thought it was perfectly reasonable to just rock on up to a foreign country, establish an English-speaking colony and then pretty much take over. 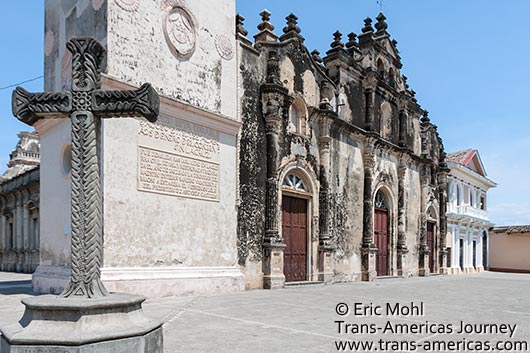 Oddly enough, that cockamamie tactic worked and Walker was actually President of Nicaragua for a year (albeit a spectacularly unpopular one). A fighting force cobbled together from the armies of various Central American countries finally kicked the Filibusterers (is that a word?) out of Nicaragua. In a final act of contrition, they set fire to Granada as they fled. Learn more about this Walker character in the 1987 movie Walker starring Ed Harris. 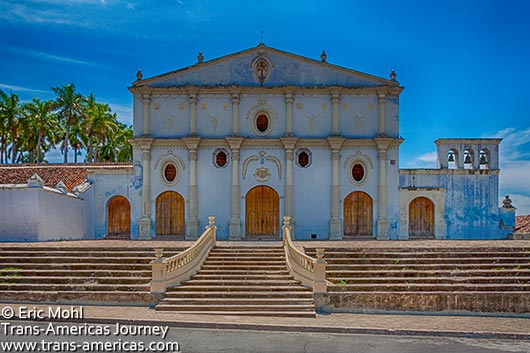 The San Francisco Church museum in Granada, Nicaragua has a large collection of indigenous artifacts and modern art.

What to do in Granada, Nicaragua

It’s a wonder any of the colonial architecture survived, but some did including the lovely yellow main cathedral and the Antiguo Convento San Francisco which was built in 1592 by Franciscan monks and is now home to indigenous sculpture, pottery, and modern paintings (US$2). 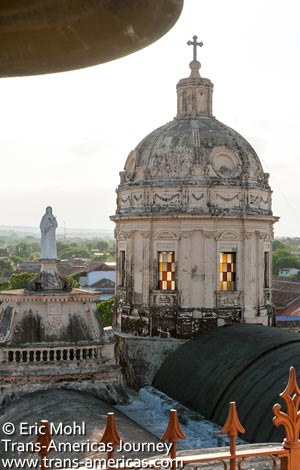 A cupola view from the roof of the Merced Cathedral in Granada, Nicaragua.

Iglesia La Merced is even older, built in 1534. Climb the narrow, curving staircase to the roof (US$1) for fantastic views over the clay tiled roofs of the surrounding Colonial structures. 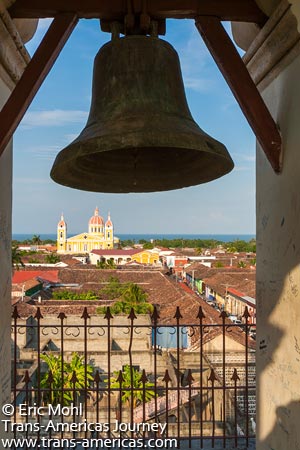 A view over Granada, Nicaragua from the bell tower of the Iglesia La Merced which was built in 1534.

For some really, really old bits and pieces of Granada visit Mi Museo (free) where Peter Kolind, owner of the nearby Hotel La Bocona, has filled a gorgeously restored colonial home with thousands of pre-Colombian artifacts. Mr. Kolind has found and purchased so many bits and pieces (more than 7,000 at last count) of the past that the entire exhibit changes every three months. 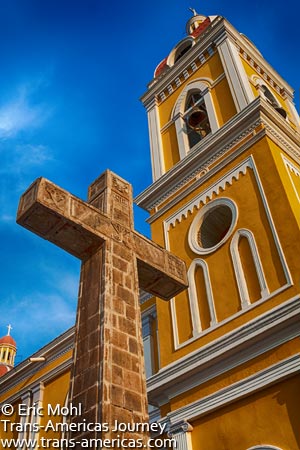 A cross in front of the Antiguo Convento San Francisco in Granada, Nicaragua.

Granada’s colonial bones have been getting a slow but steady spruce up thanks to the city’s latest invaders: retired (or semi-retired) foreigners. Lots and lots of them. At times it felt like Granada is content to have sold its soul to foreigners looking for a place where their retirement funds go further. If a few travelers stop by that’s just gravy. 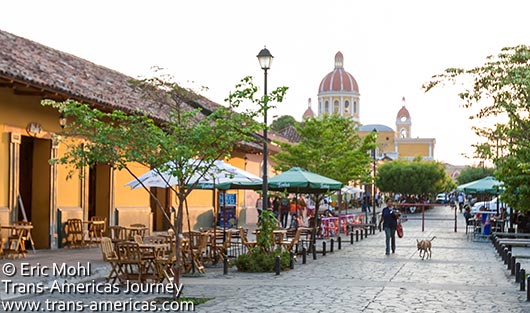 The pedestrian-only Calle de Calzada where expats, locals, and travelers mix in Granada.

Nowhere is this more apparent than on Calle de Calzada, a pedestrian-only street that breaks away off the main plaza. The promenade and the surrounding blocks are lined with foreigners enjoy foreigner stuff: bars (including the mandatory Irish bar), cafes, a few souvenir shops, a fabulous homemade gelato shop, and some noted restaurants including meat-centric El Zaguán (Nicaragua is famous for its beef) which was recommended to us by Chef Ben Slow who operates one of our favorite eateries in all of Nicaragua, Cafe Campestre on Ometepe Island. 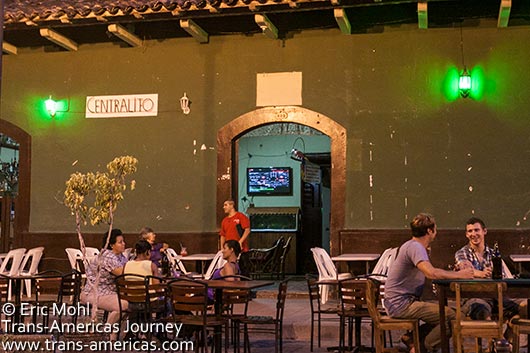 Centralito is one of the more modest, traditional bars (and therefore our favorite) on Granda’s Calle de Calzada.

Because so many foreigners (both expats and visitors) spend so much time in this area there are also a lot of begging children. We were glad to see business owners and locals making the point that child beggars are a new phenomenon (remember, Nicaragua is a socialist country) and most of the kids are not homeless or starving. They’ve simply learned that getting a handout is easier than going to school or getting a job. Don’t perpetuate the cycle. 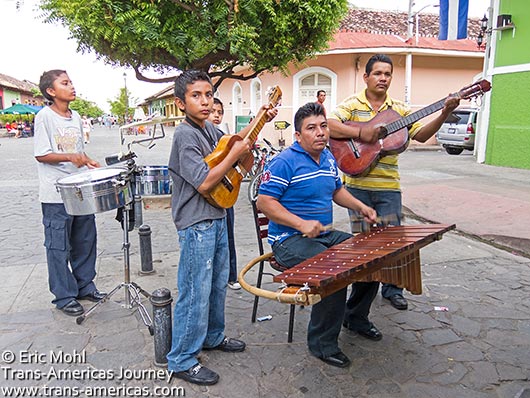 Momentary rant: You can’t swing a cat in Granada without hitting a horse pulling a tourist buggy. There have been allegations of mistreatment of these horses in recent years and despite a handful of improvements you may still want to think twice about promoting the practice of paying a man enough to (hopefully) feed and care for himself and his family but not his horse so you can be clippity-clopped around a city you should be seeing on foot anyway. If you ask us, this goes for any destination still offering horse-drawn carriage rides including New York City. 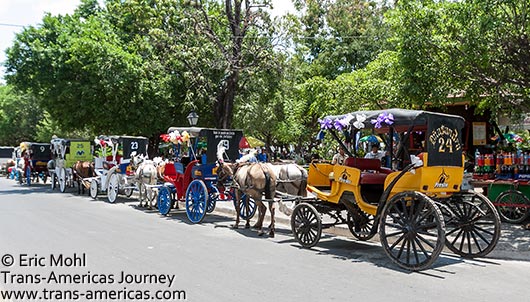 We urge you to think twice or even three times before patronizing any of the horse-drawn carriages on offer in Granada.

Where to sleep in Granada, Nicaragua

A much more welcome new addition to Granada is a small but growing crop of remarkably polished and shockingly affordable boutique hotels in addition to the city’s existing grungy hostels and slightly slumping, fairly uninspired colonial-style hotels. 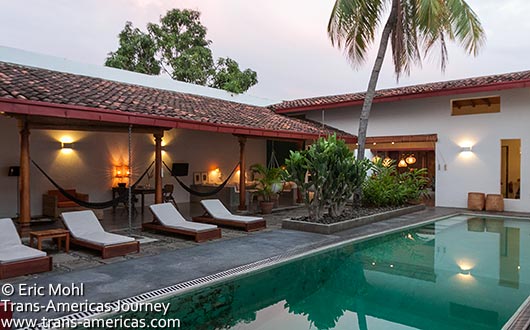 The courtyard pool at Hotel Los Patios in Granada, Nicaragua.

The best of the bunch is Los Patios Hotel where less than US$100 per night gets you stunning Scandanavia-meets-Spanish-colonial style, a perfectly serene atmosphere, and a gourmet breakfast. More reasons to book are in our full review of Los Patios Hotel. 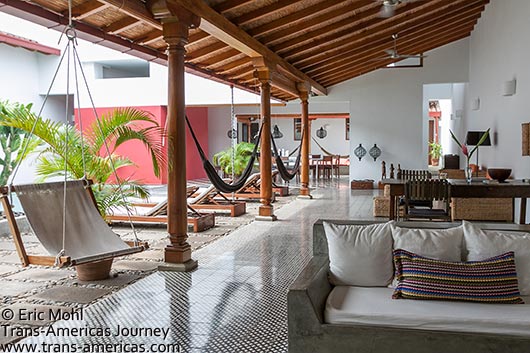 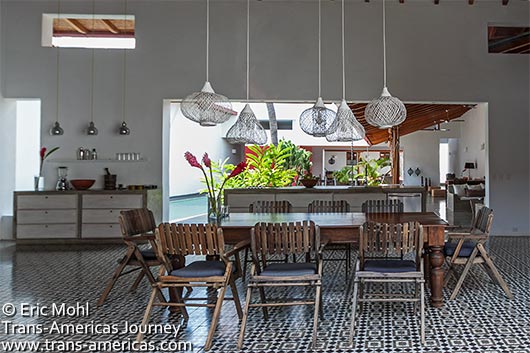 Your gourmet breakfast is served here at Hotel Los Patios in Granada, Nicaragua.

Another stylish and even more affordable choice is  Hotel Con Corazon. Run by a foundation, 100% of profits from the hotel are used to help local kids finish school. There are 15 rooms around a central courtyard that has a pool and breezy patios. Room rates, starting at around US$60, include Wi-Fi and breakfast. The feel-good factor is free. 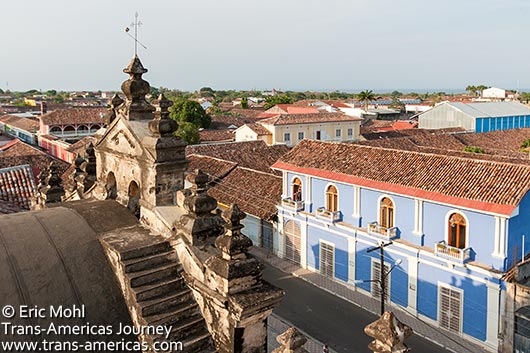 The view from Iglesia La Merced in Granada, Nicaragua.

The pros in Granada far outweighed any cons so we decided to stay awhile and rented an apartment for a month. Though the influx of gringos is pushing real estate prices higher and higher, we found a dark, breezeless, furnished studio apartment with a grungy bathroom and a small bat problem for US$350 per month including water, cable, and Wi-Fi through GPS Properties.

The very best part of this apartment was the quiet street it was on, home to Nicaraguans and gringos. Every evening as the (scorching) sun went down our neighbors would drag big wooden rocking chairs out onto the sidewalk or street in front of their doors to catch the breeze and the latest gossip. 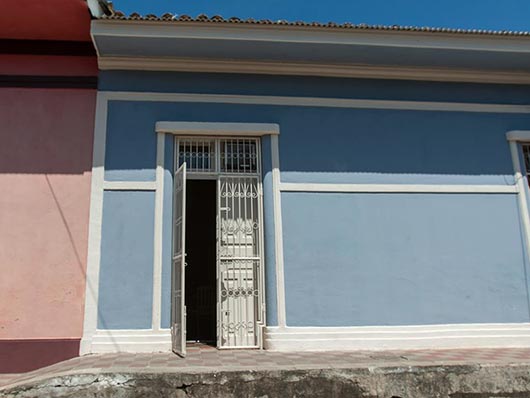 Our apartment for a month in Granada, Nicaragua.

This evening ritual is also a chance for everyone to check on everyone else. Nowhere else in Central America did we feel this ownership of a neighborhood by its residents and we think that pride and responsibility is part of the reason Nicaragua is the safest country in the region–far safer than murder-plagued Honduras and reliably safer than Panama and Costa Rica too, according to The Economist magazine. Shenanigans simply aren’t tolerated.

Our other favorite thing about being in this apartment for a month was the fruit lady. Every morning she’d roam the ‘hood toting a four foot (1.5 meter) wide rattan basket full of fresh fruit. We still have no idea how she lifted the thing full of watermelons and papayas and pineapples and we were tempted to buy more than we needed just to lighten her load.

She quickly learned to pause in front of our door and call out “amiga” and we quickly learned to buy all of our fruit from her. If she didn’t have something that we wanted during her morning rounds she would return with it, or send her daughter, later in the day. The fruit was delicious and dirt cheap and her smile was always free.

Because the apartment did not come with any parking facility we arranged to leave our truck in a filthy lot adjacent to a nearby fire department. In a shocking insight into modern socialist Nicaragua, which is the poorest country in Central America, our US$20 per month parking fee meant the firemen had some money to put gas in the fire engine’s tank.

And don’t miss our photo essay from the most beautiful city in Nicaragua.