It’s just the other side of a massive hole in the ground, but the North Rim of Grand Canyon National Park, which was designated a UNESCO World Heritage site in 1979, might as well be the other side of the planet from the more-visited South Rim. Fewer visitors mean you rarely have to wait in traffic or transfer to a people-moving bus or elbow your way to a rim view. And the canyon—which shows itself so freely from the South Rim—is largely hidden from the North Rim except to those who are willing to walk and/or drive a bit to a vantage point, which makes the canyon feel even more mysterious and awesome.

An additional 1,400 feet (425 meters) in elevation above the South Rim also means cooler temperatures and different flora, including Aspens. The North Rim even has its own squirrel that’s not found on the other side of the canyon. The Kaibab squirrel sports a distinctive charcoal-colored body and a silver tail which makes it look like two different squirrels got their halves mixed up.

Though the Kaibab squirrel can see the South Rim from most of its terrain, it appears to have decided that the hike down into the canyon then back up to the other side is just too much effort—and you can forget about the 220 mile (350 km) road route between the two rims of the park—so the squirrel remains local. 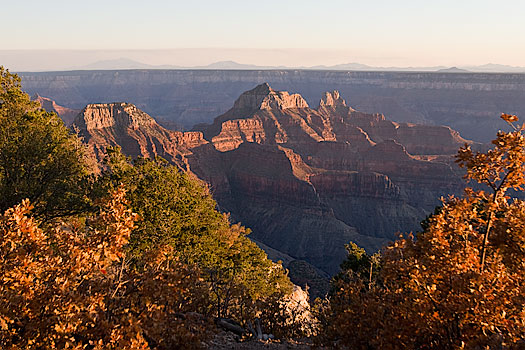 Sunset over Bright Angel Canyon with the Grand Canyon in the distance.

Despite our late fall arrival, we found the lone North Rim campground was still open for business—though without water services which reduces the nightly rate to just $12, down from the normal $17 rate. Even the coveted rim-front sites, which normally go for a jacked-up $25 a night, were available for just $12 and we happily snagged site #14 which rubs right up against the lip of a dramatic side canyon.

As we’re filling out our site registration form Bob, the campground host, came by on his bicycle and asked if he could take a picture of our Airstream Safari SE. We’re used to this kind of Airstreamania by now and we’re happy to oblige. Then Bob, who camps in a 1970s Argosy, explained that he’s been documenting all of the Airstreams that have spent the night in his campground since he started hosting back in May.

Bob says that 10 Airstreams have been in the campground on his watch, ranging from a 1963 which the owners had dubbed The Frog (rivet, rivet—get it?) to a bunch of 2008s like ours and he’s diligently logged most of them with photos and details about length, model and owners. 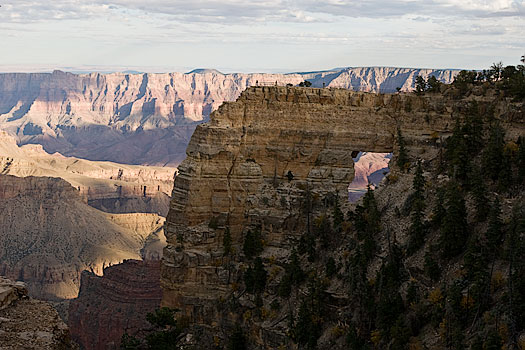 The peek-a-boo view through Angels Window which we later walk over via a narrow trail.

We’ve hiked to the bottom of the Grand Canyon and back from the South Rim during an earlier visit to the park, so we know full well that getting down there and back is a serious walk. Unlike the Kaibab squirrel, however, we were so enchanted by the canyon that we decided we have to hike it from the North Rim as well.

We didn’t begin to seriously plan a canyon hike until after we miraculously got a dorm room reservations at Phantom Ranch, the historic lodge down at the bottom of the canyon—something akin to winning the lottery. That’s when we headed to the North Rim’s back country permit office where Dave set us up with camping permits for Cottonwood Campground, mid way between Phantom Ranch and the North Rim.

With permits and reservations in hand the only thing left was the walking. And more walking. 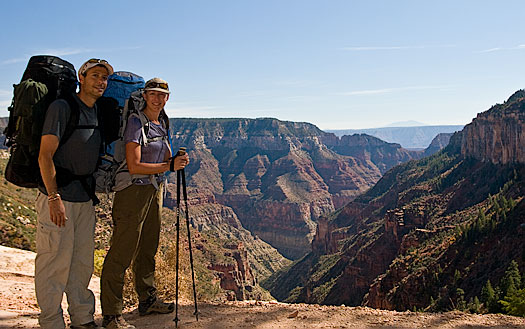 At Coconino Overlook, near the beginning of the North Kaibab trail, on our way down into the Grand Canyon. It’s still a long way down to Roaring Springs Canyon then Bright Angel Canyon and finally the Colorado River some 5,600 feet (1,700 meters) below us. 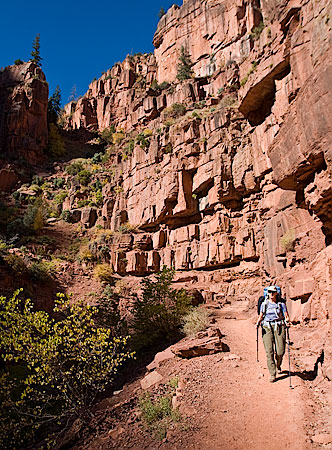 Karen heads down the trail just below the Supai Tunnel.

We hiked, virtually alone, until we reached Cottonwood Campground which has a handful of clean, flat sites near a stream—which is a good thing since the piped in water all along the North Kaibab Trail had just been turned off for the season to avoid freezing pipes. We relaxed on the bank of the stream in the last of the evening sun and used our SteriPEN to purify enough water to re-fill our Camelbak backpack bladders and get us through the night before scarfing down a delicious (seriously) freeze-dried Mountain House meal and climbing into our sleeping bags. 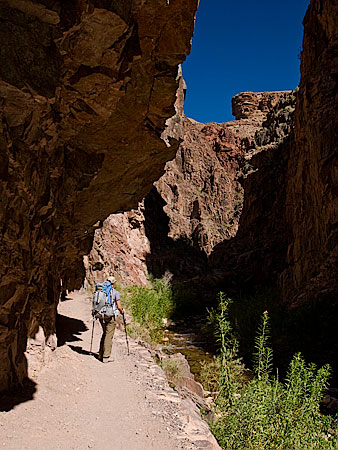 Karen in The Box, a dramatic, narrow, high-walled canyon on the lower section of the North Kaibab Trail.

The next day’s walk down to Phantom Ranch was even more breathtaking, mainly because it’s so varied. Gone were the layers upon layers of rock that we descended through the previous day, replaced with surprisingly wet and green stretches along the canyon bottom. Then we reached a section called The Box—4 miles (6.5 km) through an increasingly narrow and high-walled canyon crossing and re-crossing the stream.

Here the water thundered off the rock walls and the trail gentled-out to a leisurely stroll almost imperceptibly downhill. We could walk like this all day! 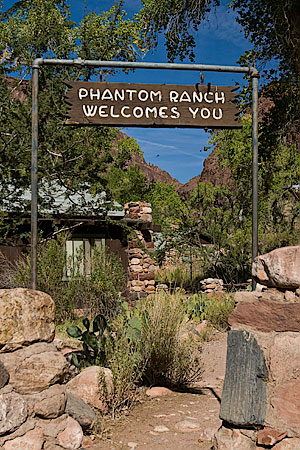 Phantom Ranch at the bottom of the Grand Canyon.

And then we were at Phantom Ranch which appeared very much like the oasis that it is. Trees, grass, clear water, nearly tame deer plus a warm bed in the dorm and a hot shower followed by a hot meal in the ranch’s dining hall where the truly delicious beef stew dinner with crisp salad, fresh-baked cornbread, and chocolate cake fueled us up for the hard part—tomorrow’s return hike back up the way we’d just came down.

After dinner we sat in on a ranger talk in the dark outdoor amphitheater near the canteen. As the ranger wrapped up, she casually asked if anyone was interested in going scorpion hunting. As feared, scorpion hunting is really, really easy since they’re all around us.

Scorpions glow in the dark, so the rangers at Phantom Ranch use flashlights fitted with black light bulbs to almost instantly reveal a disconcerting number of scorpions covering the rocks near where we’d just been sitting. One of the rangers specializes in scorpions and has been stung many times and her stories of pain, suffering, sorrow, agony, and grief made us suddenly wish we still had our boots on instead of the open-toed sandals we wore to dinner. 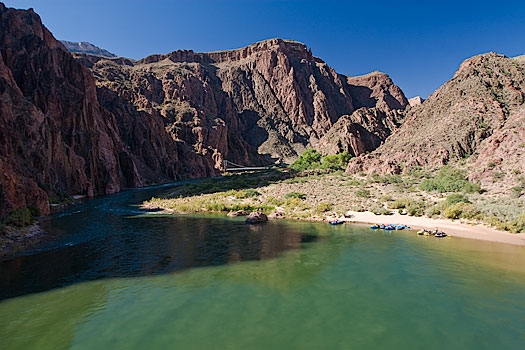 A group of lucky rafters takes a break on the banks of the Colorado River.

We’re not the only ones taking advantage of the natural and gastronomic wonders of Phantom Ranch and of all the interesting folks we met down there, two stand out.

The first is a white-bearded, big-bellied, crinkly-eyed smiler who calls himself Meadow Ed (Google him) who easily holds court with his stories from a lifetime lived on the trail—from the Grand Canyon to the Pacific Crest Trail where he is, no exaggeration, a legend. Like we said, Google him.

The second stand out is a guy we only exchange about 10 words with. The first time we saw him he was running (yes, running) past us on the trail up to the North Rim side as we were beginning to re-pack our Mountainsmith packs for our own return hike up. 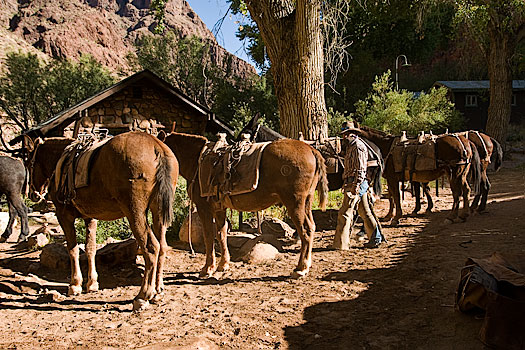 Pack mules bring supplies and people down from the South Rim to Canyon Ranch.

Later that day, as we approached the half-way mark on the North Kaibob Trail, the same runner passed is again, this time on his way back down to Phantom Ranch before continuing back up to the South Rim from whence he came. Still running, this guy had enough breath to inform us that he was on track to make the entire 42 mile (67 km) trip from the South Rim to the North Rim and back again, descending and climbing more than 11,300 long hard feet (3,444 meters), in EIGHT HOURS. That’s like running up and down a 1,150 story building spread out over 42 miles. Incredible.

We spent the next few hours on the trail simply trying to wrap our heads around what that guy was doing. At the same time, we were also getting sucked into the addictive nature of the Grand Canyon. Incredibly, we finished our own trip into the canyon and back without even getting sore (possibly due to residual fitness left over from our recent Half Dome hike). This makes us consider upping the ante ourselves with a hike from the North Rim to the South Rim in one day the next time we’re lucky enough to visit Grand Canyon National Park.

Karen relaxes on the banks of the Colorado River at the the bottom of the Grand Canyon.