On weekends and holidays locals travel to Guatapé, less than two hours from Medellin, to enjoy the cobblestone streets and vibrantly painted buildings in the colonial center of town, climb up the nearby El Peñón de Guatapé monolith (don’t miss our drone travel footage of that later in this post), and explore the reservoir. And you should too. But try to avoid weekends and holidays when the narrow, winding road into town can get choked and hotels can get full. 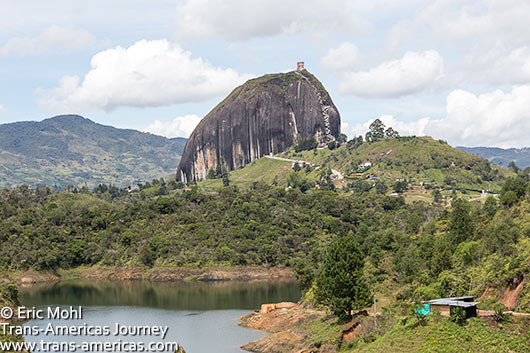 Exploring and sleeping in Guatapé

When not bursting with local tourists, Guatapé is a peaceful town. The square is a lovely place to grab a beer or a coffee. Houses and businesses in the center are meticulously kept. Some business still use olde timey hand painted signs featuring symbols for the function they perform instead of words (ie, scissors for a barber). 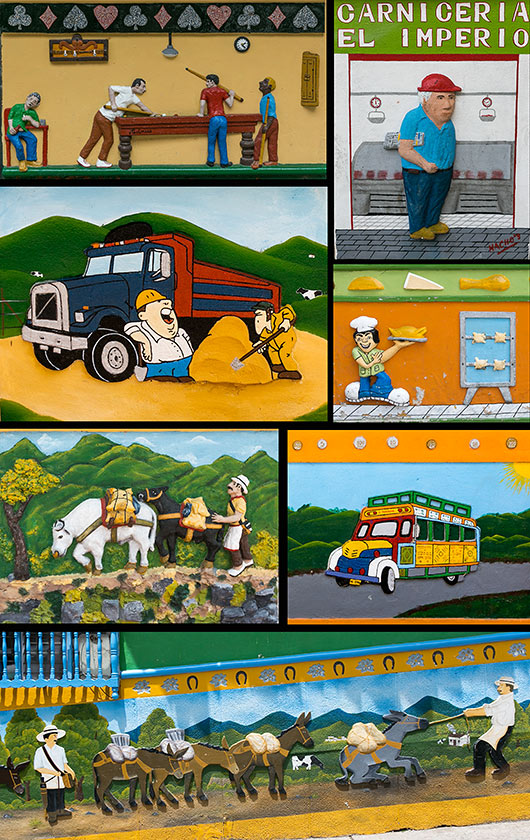 Many of the well-kept homes and businesses in the central area of the town of Guatapé are painted with festive, three-dimensional scenes that often depict the business or service offered within.

There are a lot of budget accommodations in Guatapé, some of them owned by expats like Mi Casa and the Lake View Hostel. We stayed at the mid range Hotel Guatatur, a blue and white bulk on the main square which has attempted to set a stylish tone. Avoid internal rooms (they’re dark) and consider splurging on room #303 which has corner windows that give views of the reservoir and the church plus a big jetted tub.
Book Now 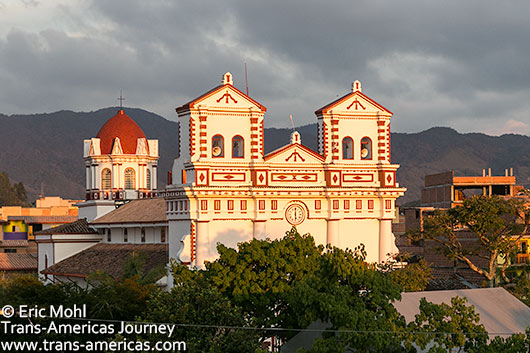 The church in Guatapé, Colombia.

The upscale Charlee Hotel in Medellin also recently opened Luxe by Charlee in Guatapé with vacation rentals for the swanky set.
Book Now 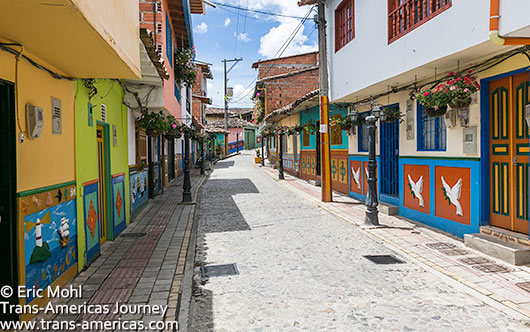 Festively painted buildings in the heart of Guatape, Colombia.

Yes, town is quaint. But the real draw here is the Guatapé monolith, also known as El Peñón de Guatapé. It’s millions of years old. The Tahamies Indians, who used to live here, worshiped the rock. The neighboring town of El Peñol (where the monolith is called La Piedra Del Peñol) claims it as their own and has kept Guatapé residents from completing a project that would paint the name “Guatapé” on the rock (only a couple of spectacularly glaring letters have been completed). 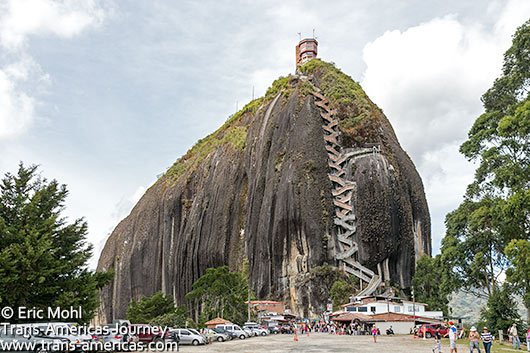 That’s the climbing route up more than 700 steps to reach the top of the El Peñón de Guatapé monolith.

As if to encourage climbers, a new number is spray painted on the route up the El Peñón de Guatapé monolith every 25 steps.

Feeling lazy? Check out our drone video footage from the top of El Peñón de Guatapé monolith, below, to enjoy the view without the climb.

The other draw in Guatapé is the huge reservoir which sprawls and meanders like a  mini Lake Powell.

Click here to see a larger version of this panoramic shot of the reservoir near Guatapé , Colombia.

Boats are available for exploring the lake but most people travel right past the reservoir’s most infamous attraction: Hacienda La Manuela, a bombed and abandoned complex once owned by the King of Cocaine, narco terrorist Pablo Escobar. 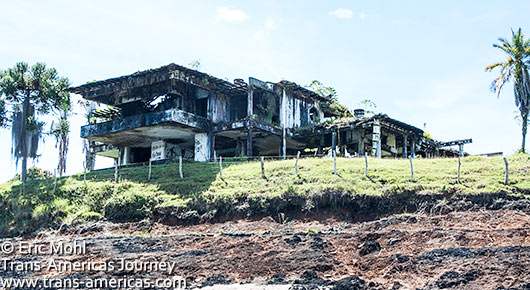 Escobar had many haciendas but La Manuela, named after Escobar’s daughter, is interesting for a number of reasons. It was bombed in 1993 by Los Pepes, a group of bad guys and the Colombian government’s “Search Block” soldiers who were united in their quest to oust Escobar and his crew. La Manuela was eventually abandoned which means that those willing to trespass and duck under a few fences can now wander around the shell of the place.

It’s been tagged by graffiti artists. The swimming pool is now a green mess. Anything of value (windows, doors, etc) has long since been removed, and the truly hopeful have also dug holes in the ground and smashed through concrete walls looking for hidden loot. 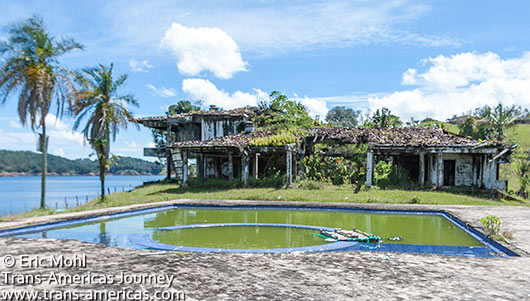 The most interesting thing about La Manuela, however, is the chance to see the lengths which Escobar and his crew were willing to go to in order to ensure a speedy escape from the place. At La Manuela, the escape route includes a tunnel big enough to drive through which leads to a different part of the reservoir where a speed boat would be waiting. 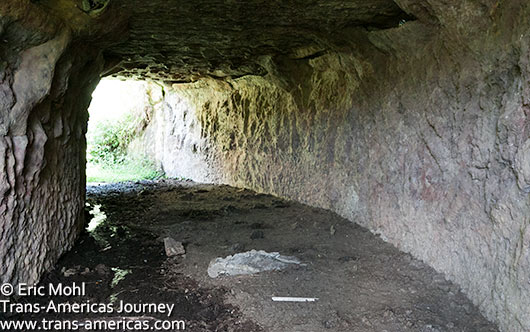 This tunnel, big enough to drive through, was part of an elaborate escape route at Pablo Escobar’s La Manuela Hacienda.

Rumor has it that La Manuela may be turned into a nightclub which we really, really hope they name Esco Bar.

For more, check out our award-winning piece about Pablo Escobar’s legacy in Colombia which was published by RoadsandKingdoms.com.