Sure, you could spend thousands on a grizzly bear watching trip to the famous Katmai regin of Alaska, or you could go to Haines and have a riverfull of feeding bears practically to yourself and for free. 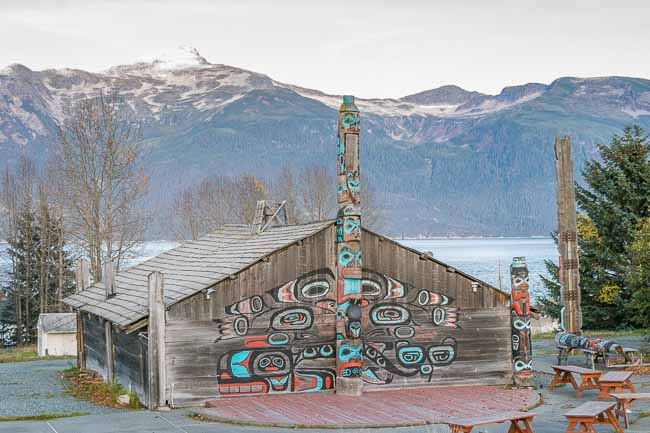 In Haines, Alaska we settled into the Chilkat Eagle B&B which was the perfect combination of affordable and comfortable and our charming and worldly host, Dave, who lives in the other half of the house, was a wealth of information about the are. Set aside some time to sit down and talk to him, perhaps over his delicious made to order breakfast (try the Tutti-Fruitti pancakes made with fruit from his own garden in the back). 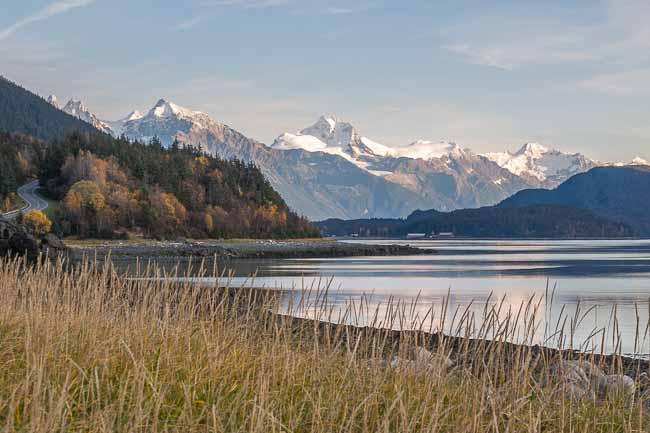 The dirty little secret of your favorite widlife films

Dave is the one who tipped us off to the nearby Kroschel Films Wildlife Park where Steve Kroschel, Steve’s son, and Mario Garrett have collected an array of Alaskan animals which they have habituated and regularly handle and loan out to movie producers and wildlife filmmakers who are looking for a sure thing when they simply must get footage of animals engaged in a particular natural behavior.

These are not trained performers—no bears on balls or anything horrible like that. Steve and Mario can simply ensure that their wolves, minks, lynxes, owls, and other charmers will dig a hole, or chase a rabbit, or run up a tree, or emerge from a den on command saving the filmmakers from days or weeks of waiting for a 100% wild animal to do the same. We hate to break it to you, but you know all of that footage you see on the National Geographic Channel and wonder “how did they get that shot”? Well, in a lot of cases, this is how.

Steve, owner of the Kroschel Films Wildlife Park, howling with a coyote, holding a fox, and petting a lynx.

Kroschel Films Wildlife Park augments its income by walking groups through their facility on an unpredictable schedule that seems to be dictated by the presence of a busload of folks fresh off the ever-diminishing number of cruise ships that dock in Haines (Dave at the Chilkat Eagle B&B or the local tourism office can generally tell you when the next tour will be).

As we drove out of town to join one of the tours we are prepared to be appalled at the animals’ living conditions, working conditions, and their level of exploitation. But, as we’ve said, this is not a bears on balls operation.

Mario, of Kroschel Films Wildlife Park, with a snowy owl, wolves, and a baby porcupine.

Okay, the “comedy” shtick that Steve and Mario have worked up together was a bit cheesy as they guffawed their way through the tour, but when they weren’t cracking lame jokes they managed to teach us a lot about animal behavior and the issues facing Alaska’s wildlife. We were also impressed at how still-wild all their creatures were and even more impressed with the respect both Steve and Mario showed the animals. 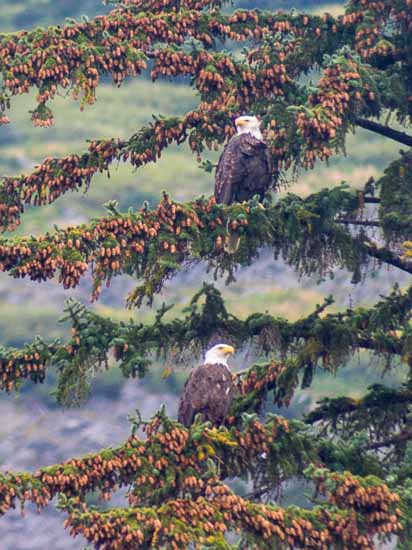 A pair of bald eagles along the Chilkat River Flats outside of Haines.

Now, for those hungry grizzly bears

Since we can never get enough animals, we followed up our Kroschel Films Wildlife Park adventure with some close encounters of the grizzly kind. Write this down: One of Alaska’s best kept secrets is the free, uncrowded, and extremely up-close grizzly bear viewing at Chilkoot Lake State Recreation Site just 10 miles (16 km) northeast of Haines where all summer and into fall (as late as November) bears can be seen scooping up their share of salmon in the Chilkoot River every evening like clockwork. 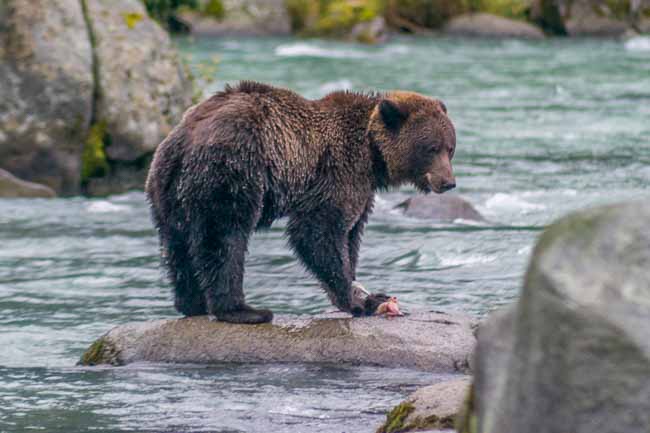 About 10 miles (16 km) outside of Haines is the Chilkoot Lake Recreation Area. In the evenings in the summer and fall, grizzly bears come to the river to feed on thousands of spawning salmon.

When we arrived around 6:30 pm, there didn’t seem to be any bears in the river but there were a handful of cars and about 30 other people gathered there to watch—mainly not-from-around-here types (like us) plus a couple of obvious die-hard locals who are wearing camouflage clothing and toting expensive cameras and lenses. These are the people to watch—when they headed to a section of the river, we shamelessly followed. 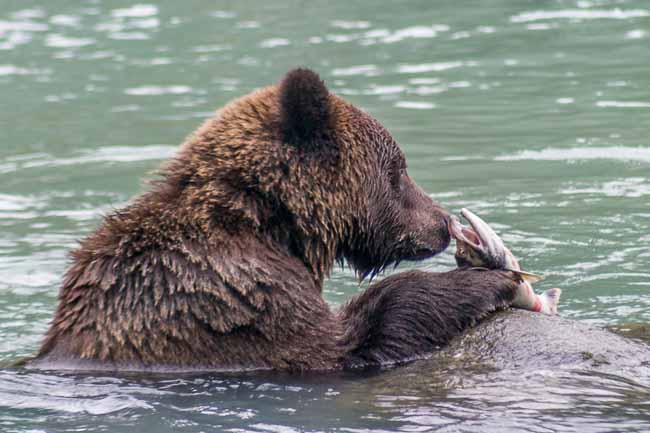 In the summer and fall, when the Chilkoot River is full of salmon, the area’s grizzly bears don’t seem to mind having a human audience nearby. 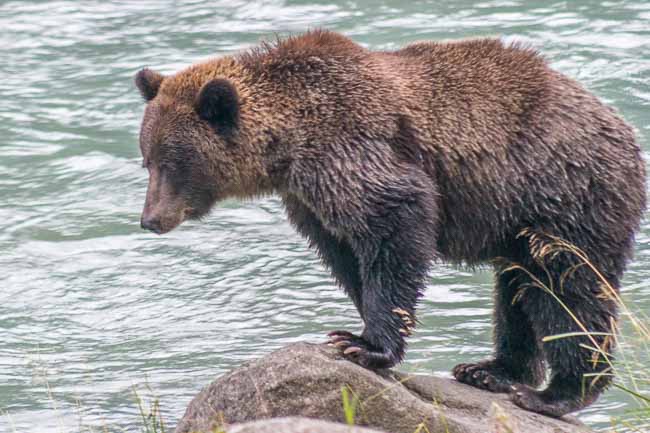 The claws of a brown bear don’t retract. Ever.

Soon we see our first grizzly chest deep in the river, eyes locked on the current, and ready to pounce. The bear seemed completely unbothered that there were a few dozen people less than 50 feet (15 meters) away. As long as we hadnn’t come for the salmon, he seemed to say, then we were cool. 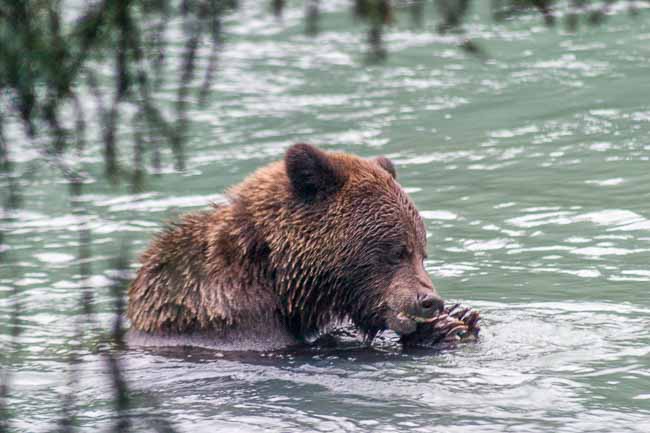 There are so many salmon in the Chilkoot River in the summer and fall that the bears just eat the tastiest bits and leave the rest behind for the bald eagles to clean up. 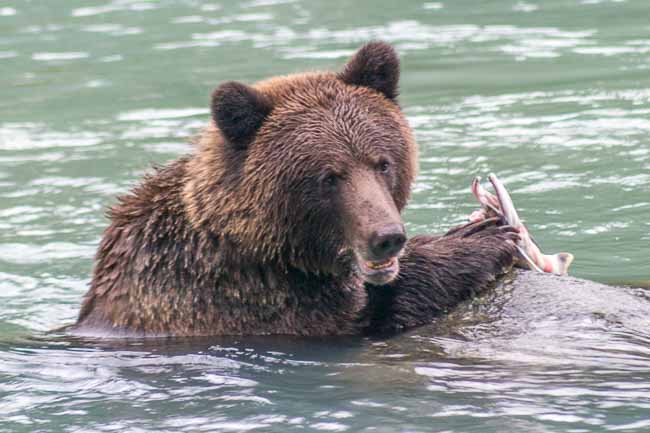 Do you have to stare while I’m eating?

Our first bear was soon joined by some friends and one obviously more dominant bear who caused nervous ripples amongst the assembled animals. There were still so many salmon in the water that the bears ate only their favorite part of each fish, which seemed to be the head. Then they tossed the rest of the carcass into the current for the bald eagles to swoop down and enjoy. Yes, not just grizzlies but bald eagles too. Alaska is awesome that way. 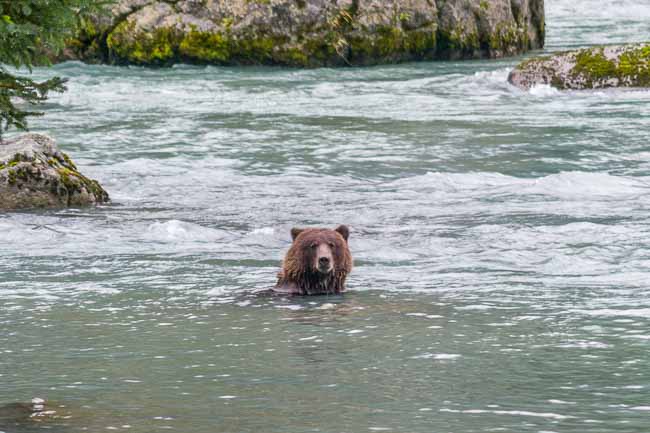 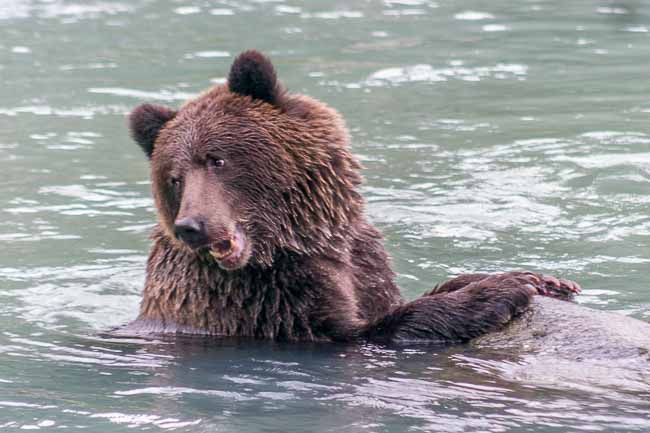 Part of what makes this stretch of water so popular with the bears is that the parks folks have set up a fish weir across the water upstream—a sort of trap that allows officials to collect and count the number of salmon spawning in the river each year which is an indication of their well-being. More than 88,000 have passed this way already this season. 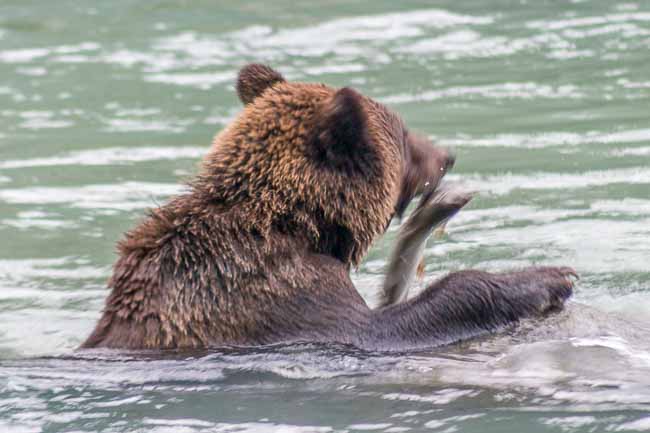 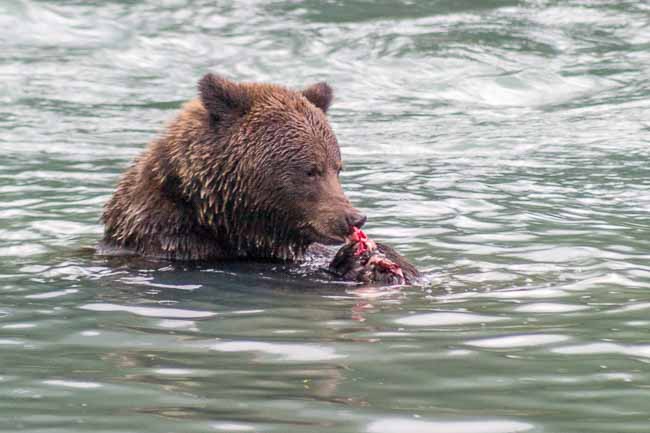 The weir means that fish become concentrated in the river, making the “fishing” even easier for the bears who merely have to scoop their claws lazily through the water to come up with a big, discolored, half-dead, spawned-out salmon which is called a “humpie” at this final stage of its life. 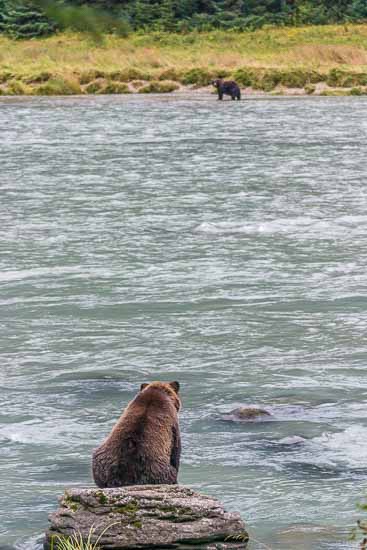 A young bear warily checks out a much larger bear on the other bank. It clearly had seniority and the younger one decided to lay low for awhile. 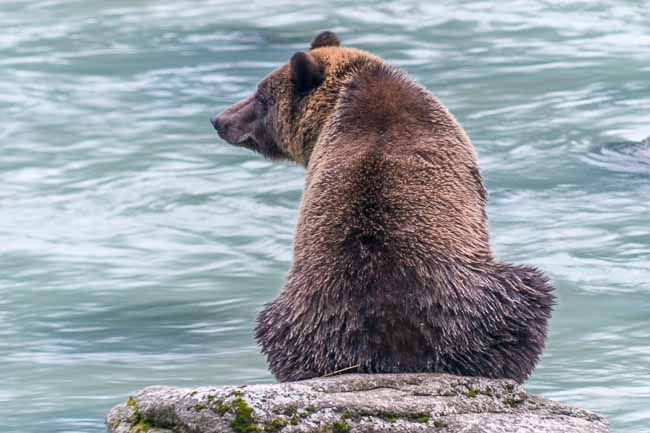 The salmon are safe. This bear is finally full.

After a couple of hours of bear watching we had a powerful craving for some salmon too, so we stopped by the fish market in Haines where we actually found some fresh salmon (fresh fish is shockingly hard to find in Alaska) and cooked up our own feast back at the Chilkat Eagle B&B which offers the bonus of a separate kitchen for guests to use. 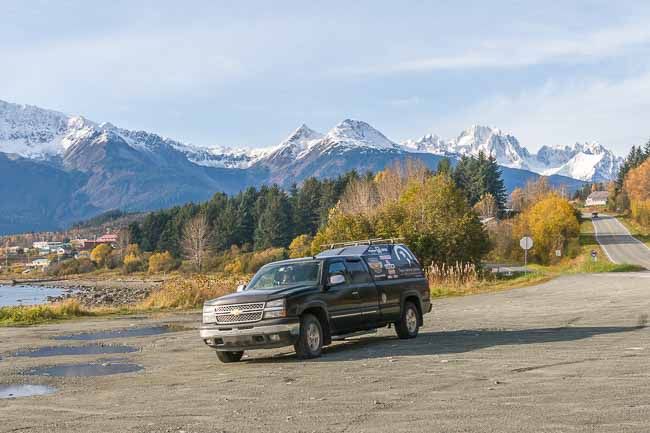 Getting ready to leave Haines and the Chilkat Mountains and head up to Alaska “proper”.