Hiking and Camping After the Flood – Havasu Falls, Arizona

In 2008 massive flash floods changed the landscape of the famous Havasu Falls and closed the area while its Native American caretakers decided how to rebuild. We wanted to see what Havasu Falls was like after the flood, so a few weeks after the area was re-opened we hit the trail to go hiking and camping in Havasu Falls. Here’s what we saw. 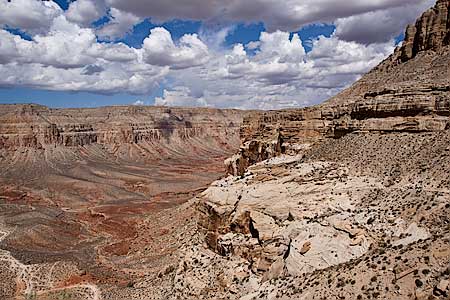 Getting to Havasu Falls

The drive to the trailhead that heads down to Havasu Falls on the Havasupai Reservation is gorgeous. Winding, deserted, rising and falling through desert into forest and back into desert again. It dead-ends in a parking lot, pack mule hitching area, and helipad grandiosel called Hilltop, Arizona. This is the only point within the Havasupai Reservation that’s connected by road.

From there it’s about 8 miles (12 km) down, down, down to the lone Havasupai town, a place called Supai. From there it’s another 2 miles (3 km) to Havasu Falls itself. This place is famed for its blue-green water (the word havasu actually means blue green water) and impressively tall cascades.

On the trail to Havasu Falls

As usual we didn’t get as early a start as we’d hoped so it was after 11 am before we were on the trail under a blazing Arizona sun. The first mile and a half of the trail is wicked steep and very dusty from all the pack animals that travel up and down.

As we rounded one of the very first switchbacks we encountered one of those pack animals and it appeared to have had enough. It spooked, bolted, pulled on the other horse it was tied to, and ultimately seemed to collapse. The frustrated wrangler tried to get the animal to stand up again but no dice. Then he began unloading the poor thing. Frankly, some of the hikers heading up the trail looked like they were about to collapse too. 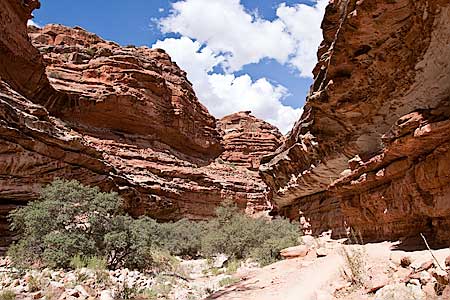 Part of the hike down to Havasu Falls passes through this beautiful winding canyon.

Much of the trail down to Havasu Falls travels over rocks in the dry river bed that winds through a canyon. It’s beautiful, but not easy hiking through all those stones. It sure beats the other predominant trail condition, however: sand. In a truly evil turn of events, the sand gets particularly deep in the final 2 miles (1 km) of the trail between the village of Supai and the campground itself, so save some energy for that last push. 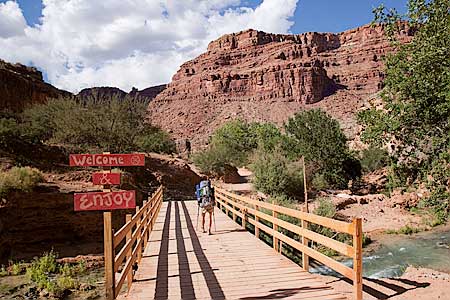 After 10 miles (16 km) of hiking we were near the top of Havasu Falls. However, it was still another half mile or so to where we pitched our tent.

We’d planned to hike to Havasu Falls last September but terrible flash flooding in August of 2008 closed the area until June of 2009. Near the end of the hike down we saw the first signs of flood damage as we passed what used to be Navajo Falls but is now a scarred bank and two new weaker falls.

A quarter mile further along we finally reached the top of the campground and got our first view of Havasu Falls itself. It too was changed by the flooding and water that used to fall via two side-by-side cascades now tumbles down in one single stream. 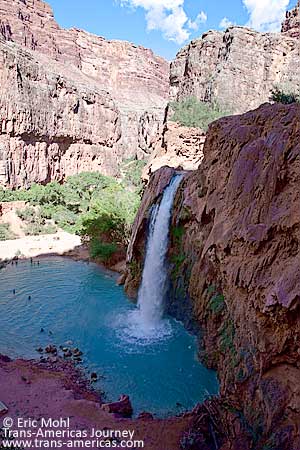 Our first glimpse of Havasu Falls.

Havasu Falls is still a spectacular sight, however, and the Havasu people have done a good job of repairing damage that the flood did to the pool below the fall by shoring up areas with sandbags to preserve the weirdly resort-like natural swimming hole beneath the cascade. 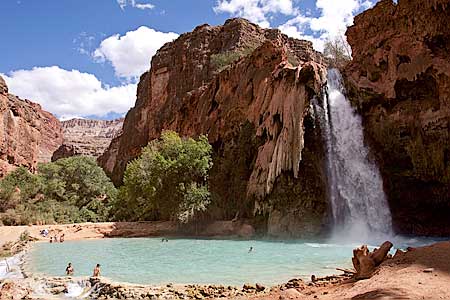 Havasu Falls finishes in a  pool that’s still lovely and inviting despite damage caused by the flash floods of 2008. 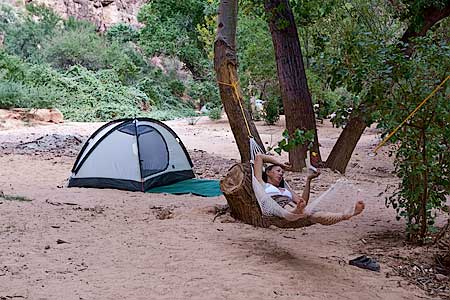 The campground was also heavily damaged in the 2008 flash flooding but we found a comfortable spot by the river and set up home for three nights.

Tree stumps, piles of debris and half-buried picnic tables attest to the havoc the flooding wreaked on the Havasu Falls campground as well and there was still a lot left to clean up. Thankfully, the camping area is huge and there were plenty of flat, sandy, shaded places next to the now-placid river to pitch a tent. We even inherited a hammock and a couple of blow up water mattresses from people heading out.

Travel tip for camping at Havasu Falls: the most private sites are down by Mooney Falls at the far end of the campground, so keep walking. Another tip: it’s generally pretty warm at the campground even at night and we were very glad that we’d decided to leave our full sleeping bags in the truck and bring our Cocoon Silk Tropic Traveler warm weather bag instead. Not only is it a fraction of the size and weight of our regular bags, we also have a coupling sheet that makes it double-size allowing us to sleep together.

One great side effect of the flooding is that the campground now has a vastly improved toilet system. Gone are the porta-potties that used to inefficiently serve the campground when it was maxed out at 300 or more campers. In their place are clean composting toilets built up the bank away from the river to avoid damage from any future flooding. The things even have motion-sensor solar lighting at night!

There is a pure spring outside the campground for drinking water but the steep, long, hot hike and 2,200 foot (670 meter) descent made us reluctant to get up and walk to it from our campsite. Luckily, we’d packed in our SteriPEN and that’s all we needed to make perfectly pure drinking water in 60 second straight from the river using safe, tasteless ultra-violet rays. 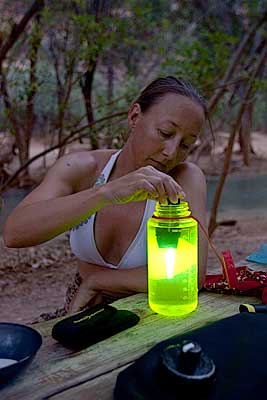 Karen put our SteriPEN to good use purifying river water in 60 seconds using nothing more than ultra-violet light. 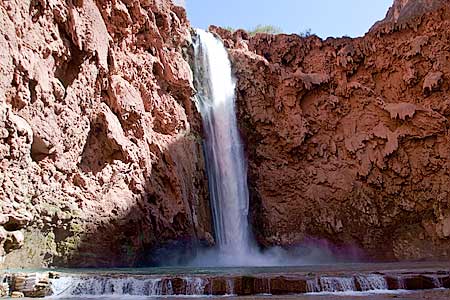 At the far end of the campground lies Mooney Falls.

Rested and revived, we spent the next day hiking down to Mooney Falls, a 200 foot (60 meter) cascade at the far end of the campground. It’s reached via an incredible “trail” carved out of (and sometimes through) a rock face. Crude footholds and chain hand rails made the trail moderately more manageable. 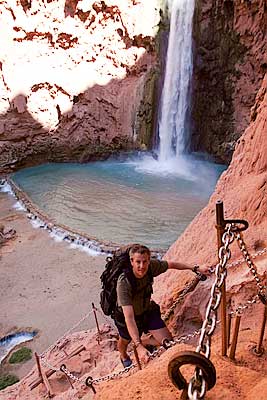 Getting to the bottom of Mooney Falls required an interesting climb down a sheer rock wall.

From Mooney Falls we continued about 4 miles (6.5 km) down river (sometimes literally in the river) to Beaver Falls. The descent was gradual and the weather was perfect. Most people never hike beyond Havasu Falls but for us this walk was the highlight of our visit. 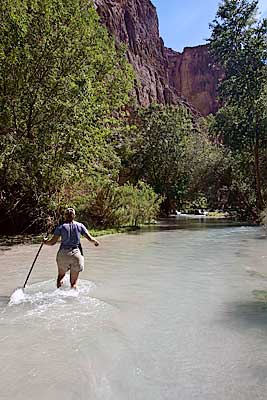 From the bottom of Mooney Falls it was another 4 miles (6.5 km) gently down the canyon to Beaver Falls including several refreshing river crossings. 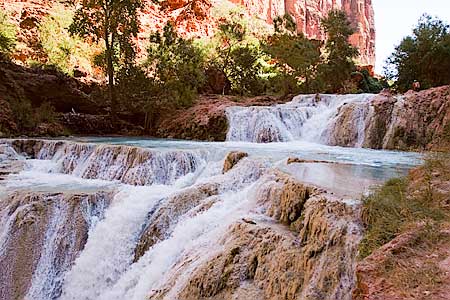 The river pools and cascades as minerals in the water form crusty enclosures.

The way down to  Beaver Falls included trails through lush vegetation, many river crossings and the ever-changing river itself which rushes in places, pools up in others and was always that gorgeous blue green color.

At one point we even encountered a small band of big horn sheep feeding near the trail. Startled, they leaped across the trail not more than five feet in front of us, each of the four animals looking us in the eye as if to say “what are you doing here?”  before bounding away. 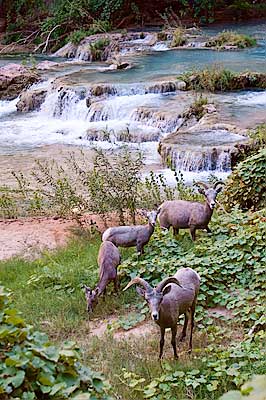 On the way down to Beaver Falls we ran into a family of big horn sheep. Or did they run into us? 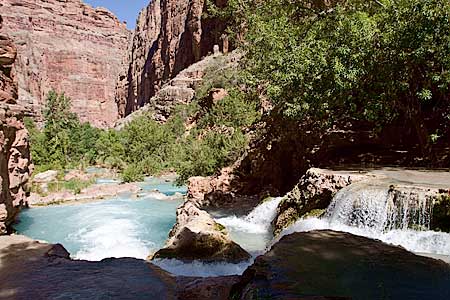 The top of Beaver Falls. 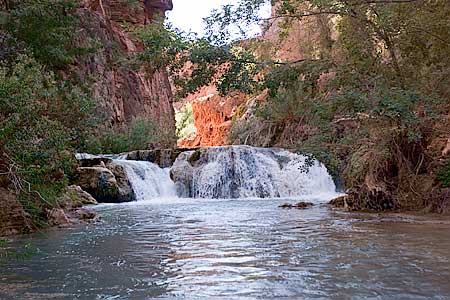 Yet another inviting pool in the river on our way to  Beaver Falls. 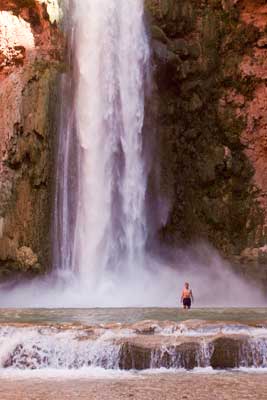 On the return trip back to the campground Eric got pummeled as he attempted to get close to the awesome force of Mooney Falls.

To say we weren’t ready to leave is an understatement but after three days of swimming, hiking, and hammocking it was time to go. We gave our inherited hammock and blow up mattresses to other campers, packed our bags, and headed out.

Hiking out of Havasu Falls

For one split second, we contemplated tossing our gear onto a horse for the hike out, then laughed at ourselves and hit the trail. This time we did manage an early start (6 am) and the canyon walls kept us in the shade until about 9 am. The final two hours of the climb out, however, were in full sun including that final brutal mile and a half during which we steeply gained 1,000 feet (300 meters). 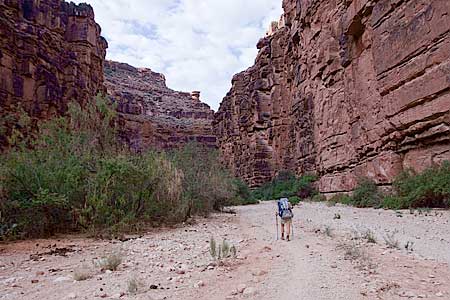 After three days at Havasu Falls it was time for the long, hot climb back up.

To get an even better idea of the trail and terrain, check out our video from Havasu Falls, below.