Aconcagua is the highest mountain outside of the Himalayas and the highest mountain in the Americas. This inspires mountain climbers from around the world to travel to Argentina to try to bag the Andean peak. But you don’t have to have an ice axe and crampons to experience this imposing mountain and surrounding scenery. The rest of us can enjoy hiking in Aconcagua Provincial Park instead. 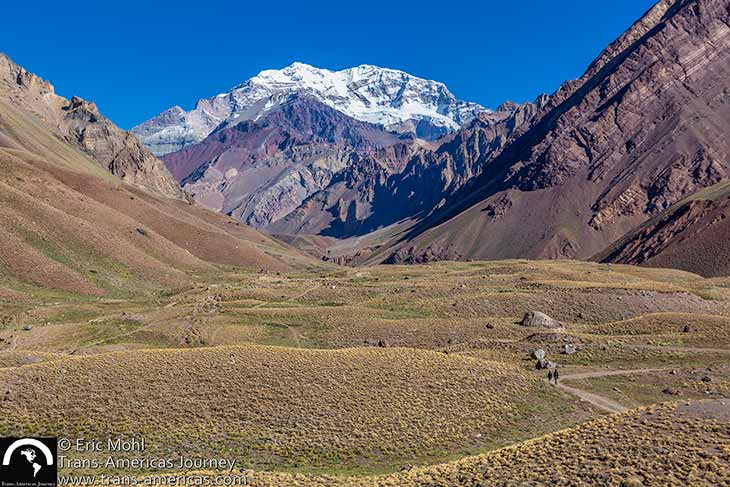 A trail in Aconcagua Provincial Park in Argentina with the park’s massive namesake mountain in the background.

At 22,837 feet (6,961 meters) Aconcagua is the highest mountain outside of Asia and the highest in the Americas. This volcanic formation is also one of the so-called Seven Summits which is a mountaineering to-do list of the highest peaks around the world.

The mountain is part of the massive Incan Road network and, in 1818, General Don Jose de San Martin crossed this part of the Andes mountain range during the war with the Spanish Empire so that he could liberate Chile. The origin of the name Aconcagua is a mystery with various theories attributing it to terms in different Indigenous languages.

Aconcagua remained unclimbed until 1897 and it’s been climbed many times since, including once by an all-female team of cholitas from Bolivia who did it wearing their traditional long layered skirts. Check out their badassery in this documentary about the climbing cholitas.

The mountain is certainly the centerpiece of Aconcagua Provincial Park, but this 162,323 acre (65,690 hectare) high-altitude park also has plenty to offer non-climbers including day hiking, multi-day trekking, and camping. 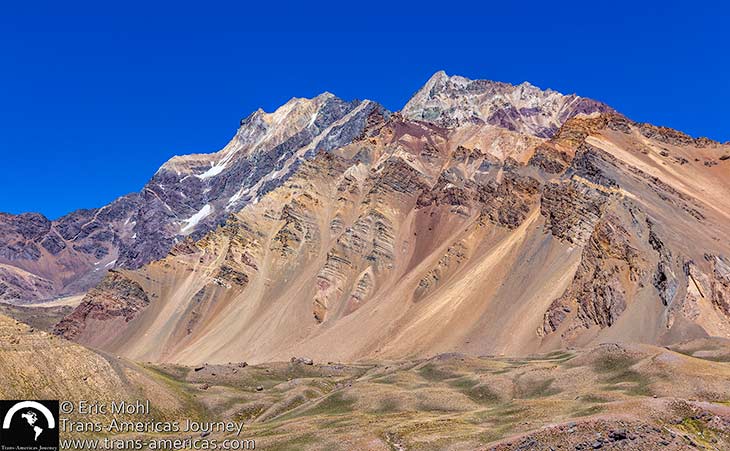 Cerro Toloso as seen from the La Confluencia camp in Aconcagua Provincial Park in Argentina.

We chose to hike to the La Confluencia (The Confluence) base camp and back which is perfect for anyone looking for moderate day hiking in Aconcagua Provincial Park. We had hoped to hike past La Confluencia to Plaza Francia (French Camp) where we would camp for a night with views of Aconcagua’s South Wall, but during the Covid-19 pandemic this park was only open up to La Confluencia.

From the parking lot, it didn’t take long to reach a viewpoint where, honestly, you get the best views of Aconcagua mountain. Even if you’re not up for a walk, take a stroll to this viewpoint at least. 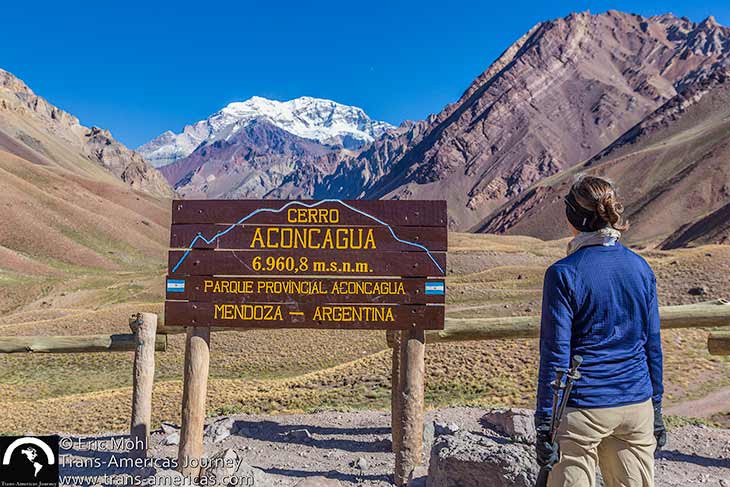 Karen enjoying the very best view of Aconcagua early in our hike to La Confluencia in the park.

From the viewpoint, the dirt and gravel trail remained clear and in good condition as we gently climbed. We were hiking in January (South American summer) and the landscape was awash in all sorts of wildflowers. We also saw a bit of wildlife in the park including a small fox and (maybe) a condor. 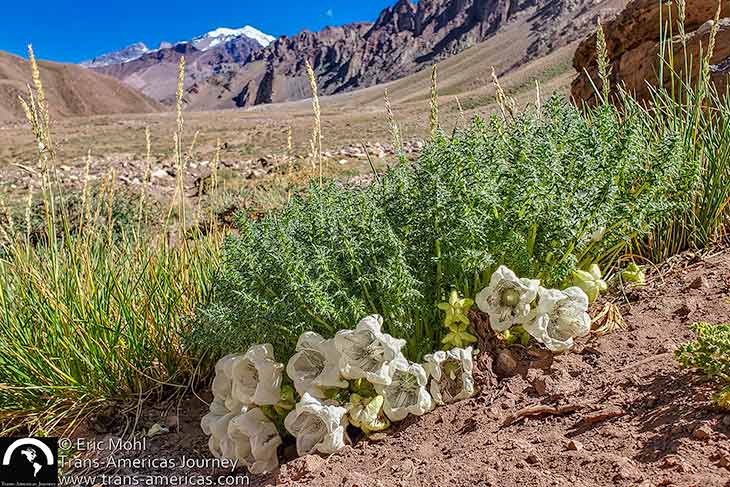 A Caiophora Coronata plant, one of many strange blooms we saw in Aconcagua Provincial Park.

Many of the flowers we saw in Aconcagua Provincial Park were new to us and we didn’t expect so much color in this rocky, extreme landscape which is covered in ice and snow for much of the year. 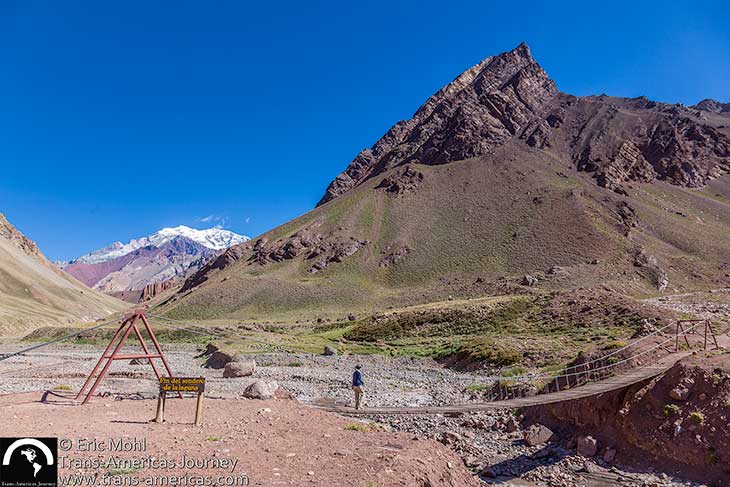 Crossing the Horcones River on a sturdy swinging bridge in Aconcagua Provincial Park on our way to La Confluencia.

We soon reached the swinging bridge that crosses the Horcones River. This is a very well-built and stable bridge because it not only carries humans but also mules that are used to help transport gear for climbers and base camps up and down this trail.

When we were in the park, all visitors who paid to enter the park were allowed to walk as far as this bridge passing Laguna de Horcones and the viewpoint along the way. If you wanted to go beyond the bridge, you had to purchase a trekking permit to visit La Confluencia (the only trekking option that was open when we were there), Plaza Francia, and Plaza de Mulas which is the basecamp for climbing Aconcagua. 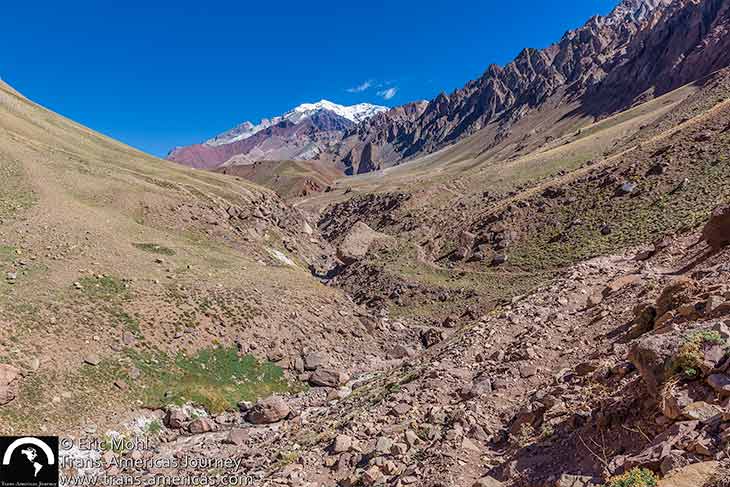 The trail as it climbs up to La Confluencia. 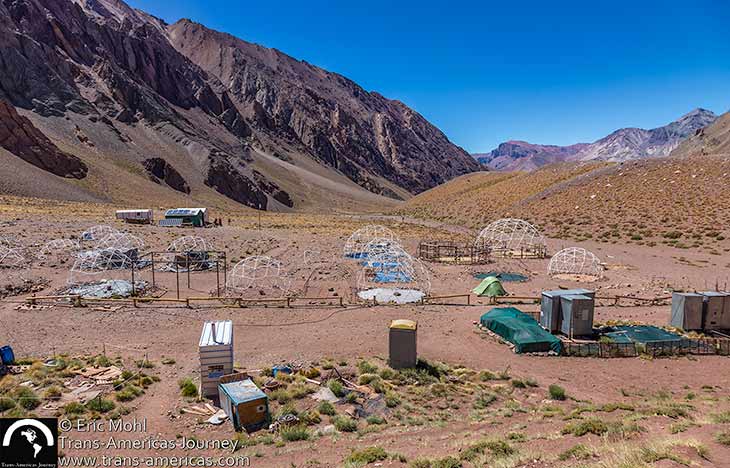 Domes at La Confluencia are normally set up to provide beds, meals, toilets, and even hot showers to hikers and trekkers.

When we reached the La Confluencia camp we were surprised to see about 20 domes in various sizes which are set up to provide beds and meals to hikers. There were even toilets and hot shower facilities. All facilities at La Confluencia were disassembled when we were there because group trips were not allowed during the pandemic. There’s also a park ranger station at La Confluencia and the rangers were friendly and full of tips. 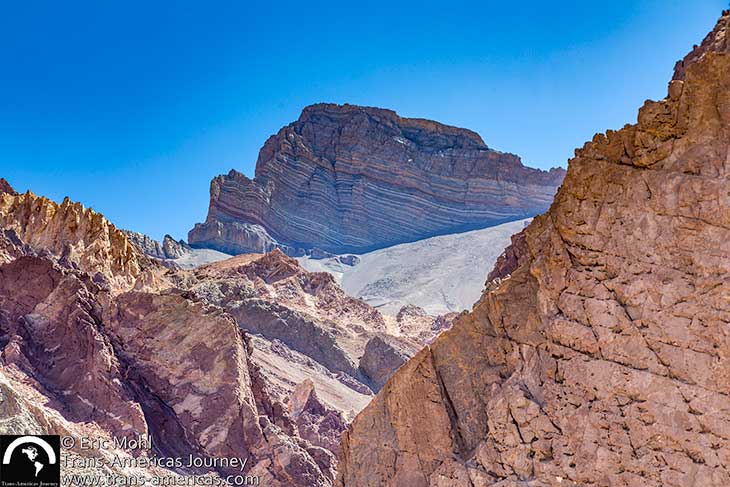 One of the rangers raved about a multi-day hike to another valley in the park called Quebrada de Vacas which, he said, is wilder and less windy and requires total self-sufficiency for camping. The rangers also raved about the views at another mirador about 6 miles (10 km) beyond La Confluencia on the way up to French Camp where we originally wanted to go. Next time. 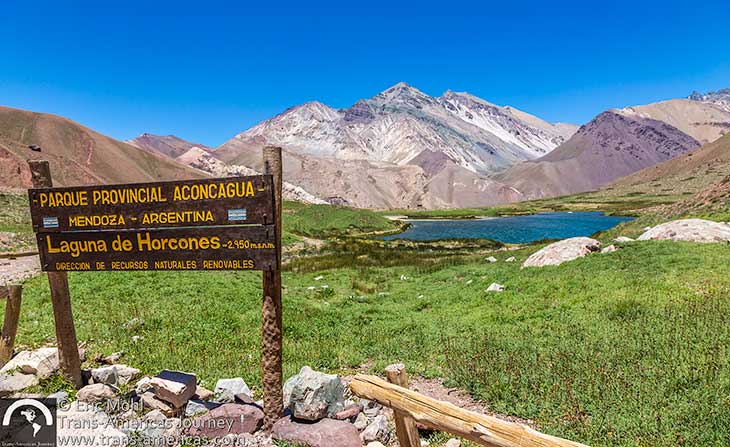 From La Confluencia, we retraced our steps back down to our truck in the parking area. This time, however, we forked to the right near the bottom to take a trail past lovely Laguna de Horcones instead of passing the viewpoint again.

When to go: The park is open from mid-November to mid-March (during South American summer) but this park, at elevations of 10,000 feet (3,000 meters) and higher, can experience cold temperatures and high wind at any time. Note that rangers told us that January is usually the warmest and least windy month.

Fees: 600-2,500 ARS (about US$6.50 to US$27) per person for non-Latin foreigners depending on the hikes you choose. The lowest entry price allows access to the areas between the park entrance and the bridge including Laguna de Horcones and the viewpoint. All hikes beyond the bridge are considered treks and require a higher entry fee. 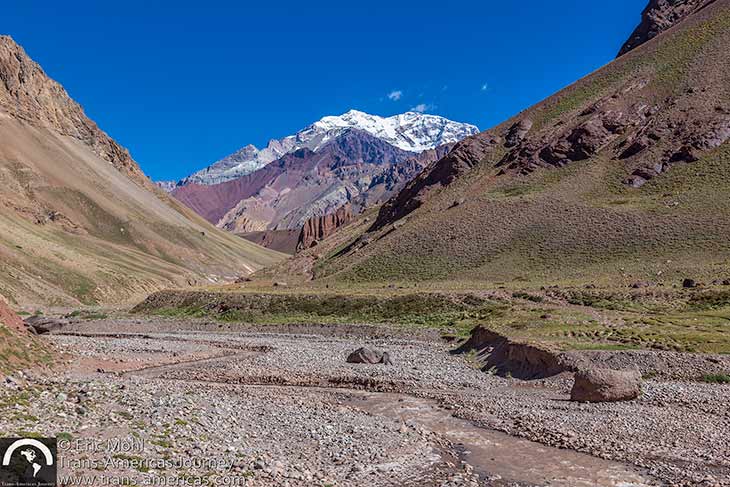 Getting to Aconcagua Provincial Park

Aconcagua Provincial Park is 115 miles (185 km) from the city of Mendoza (allow about four hours of drive time) on scenic Ruta Nacional 7 as it winds up to the Paso Internacional Libertadores border with Chile. Tour companies in Mendoza offer day trips to the park which include transportation and guide.

Fun fact: For all intents and purposes this is a national park, it’s just that the province of Mendoza didn’t want to put it into Argentina’s national park system because they wanted to keep the substantial fees paid by international mountain climbers who want to scale Aconcagua within Mendoza province, therefore it remains a provincial park.

Where to sleep near Aconcagua Provincial Park

We stayed at Hospedaje Leñas del Toloso, just 2 miles (1.2 km) past the park entrance, where owner Sebastian Tebez has revitalized an abandoned train station into a homey guesthouse and museum. Sebastian first saw the station in 2011 when he was biking in the area. His love of mountains and this rugged area of the Andes made him curious about the fate of the station and he soon learned that if he agreed to restore the buildings, which had been abandoned since 1985, the government would allow him to also run a business there. 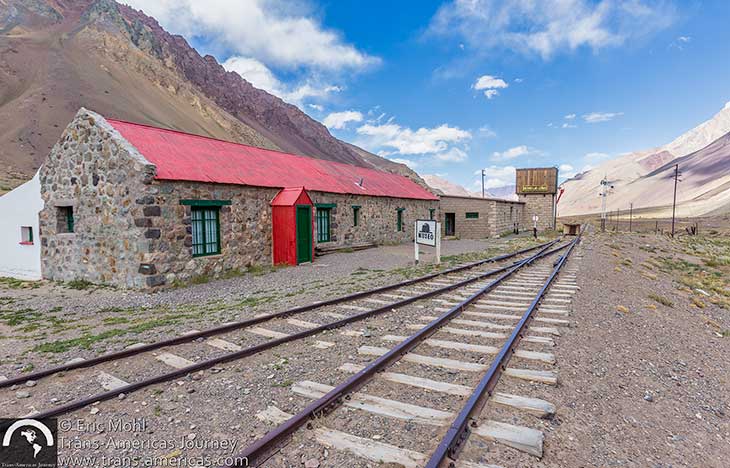 Some of the abandoned railway buildings that Sebastian Tebez restored and turned into a charming guesthouse and museum near Aconcagua Provincial Park.

In 2013 he started renovation work armed with little more than his passion and a few skills his grandfather had taught him. He actually credits hours of YouTube videos for giving him the know-how he needed to revive the badly damaged structures. Today, Sebastian’s guesthouse, inspired by the hostels he experienced during a trip to Europe, includes an atmospheric bar and simple dining area plus rooms in two outbuildings.

The outbuilding we stayed in had two bedrooms, a shared bathroom, a small but serviceable kitchen, and a shared dining room/living room with a TV. There’s hot water, heating in winter, and Andes views all around. It’s all perfectly clean and surprisingly stylish since Sebastian upcycled train paraphernalia as interior decor. For example, first-class velvet train seats were installed as a couch in our living room and old black and white photos of the train and the station adorned the walls. 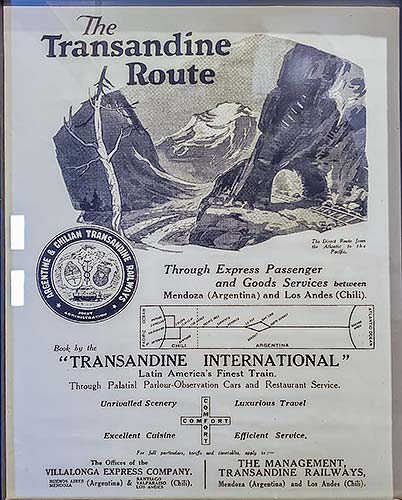 Train memorabilia in the museum at Hospedaje Leñas del Toloso.

While you’re there, don’t miss the small train museum that Sebastian has also created. It’s filled with restored items–uniforms, ticket punchers, signals, and more–displayed with very professional lighting and sings in English and Spanish.

Other things to see near Aconcagua Provincial Park 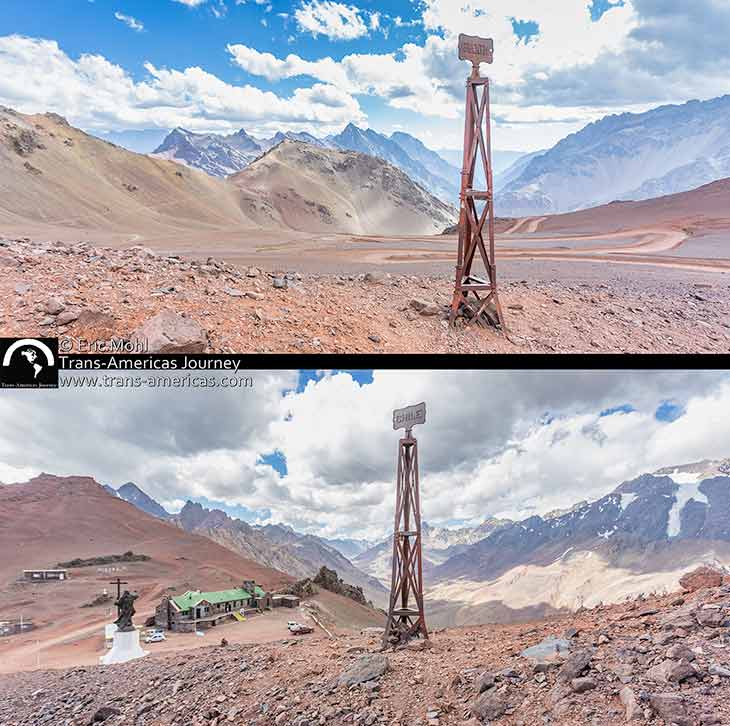 Paso Cristo Redentor looking into Argentina (top) and into Chile (bottom which the Cristo the Redeemer sculpture below).

Just a few miles past the park toward Chile is Paso Cristo Redentor (sometimes called Cristo Redentor de los Andes) where a Christ the Redeemer statue that’s been there since 1904 marks a section of the border between Chile and Argentina at 12,572 feet (3,832 meters). Most people take the new paved highway and tunnel through the mountains to cross between the two countries at the bustling Los Libertadores border where we’ve crossed many times. However, some do cross here but first you’ve got to get there via a steep switch-back road that’s only open in the summer. 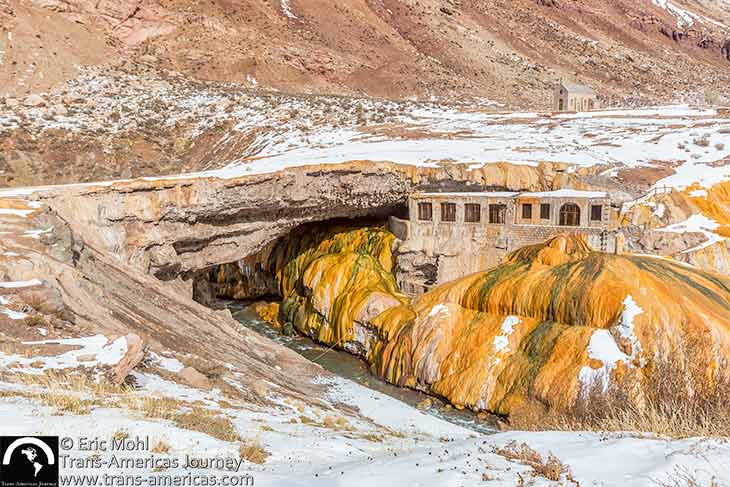 The naturally-formed Inca Bridge over the Las Cuevas River near Aconcagua Provincial Park. The structure you can see is a defunct building over hot springs that helped form the bridge.

Back toward Mendoza, just before the park entrance, you’ll find the Puente del Inca (Incan Bridge) which is a natural arch/bridge formation over the Las Cuevas River. It took ice (glaciers) and heat (natural hot springs) to form the bridge, which has become unstable over time but you can still see it from a short (safe) distance away.

Where to eat near Aconcagua Provincial Park

La Juanita, in the mountain town of Uspallata which is about an hour from the park on the way back toward Mendoza, serves better-than-average versions of all the favorites (meat dishes, pasta dishes, trout, salads, empanadas, etc.) in a relaxed indoor/outdoor setting that draws a crowd.