We’ve been raving about the horse and cowboy culture in Lagos de Moreno and while we were there we got to know some of the local trainers who are crafting all types of amazing horses. 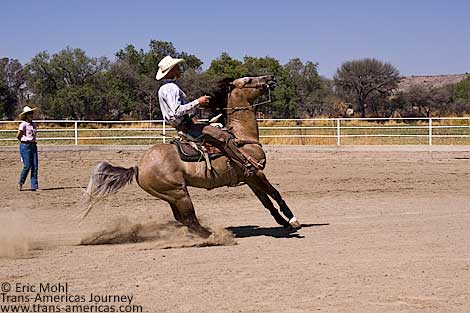 One of the most sought-after trainers of horses for use in competitive charreadas (Mexican rodeos) is Juan Zermeno. Juan is a perfectly-attired guy with steely eyes and a better grasp on the English language than he lets on. More importantly, he speaks horse. Fluently. 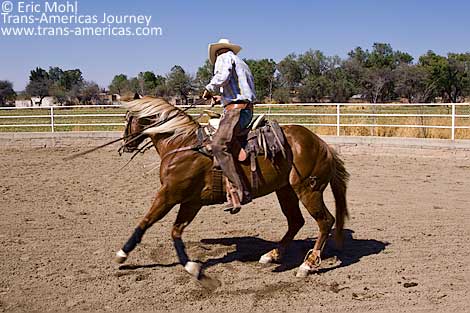 To watch Juan ride any of the dozen or so horses that he’s training at any given time (some sent to him from the US) is to understand that the old saw about “horse and rider becoming one” isn’t always a ridiculous cliche. 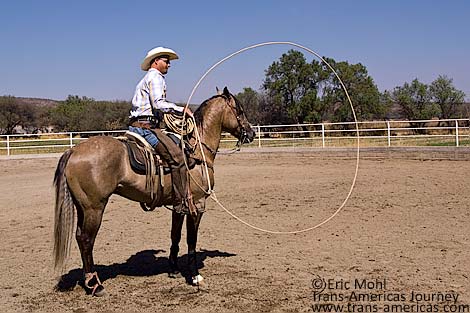 Trainer Juan Zermeno makes it look easy to hang a perfect loop in the air right next to a horse’s head.

At the other end of the spectrum is Eugenio Macias Guerra, a lanky cowboy with a mischievous, moustachioed smile that creeps up on you. Eugenio is not fancy. Eugenio is not  showy. Eugenio is one of the gentlest horsemen we’ve ever seen. Unlike Juan, Eugenio doesn’t so much convince a horse to do what he wants it to do. He convinces the horse that it’s doing what it wants to do. 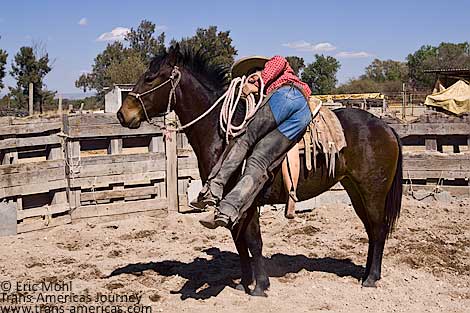 Trainer Eugenio Macias Guerra puts his weight on the back of this mare for the very first time and they both act like it was their idea.

We saw Eugenio’s approach in full swing the day we watched him put a saddle (and himself) on the back of a mare for the very first time in her life. In a small cobbled together wooden ring Eugenio and the mare, wearing nothing more than a rope halter with a lead rope, came to an understanding. First trust, then comprehension at which point Eugenio was able to make the mare follow him, change direction and walk to him at will. She wanted to do it.

Eugenio was so confident of the mare’s acceptance and understanding of these basic (but crucial) tasks that he let Karen into the ring with the horse for a few intense moments. Then it was time for the saddle pad which Karen put on the mare’s back, following Eugenio’s instructions about moving the pad around the mare’s body and never losing contact with her.

Saddle pad in place, Eugenio took over for the big stuff: the saddle and his own body. Forget any images you may have of fiercely bucking horses trying desperately to get out from under the saddle with fear and mistrust in their eyes. After a few minutes of quietly introducing the saddle to the mare Eugenio had it on her back and cinched without anything more rebellious than a twitch of her tail. Within minutes the mare was also quietly, tentatively moving around the ring with Eugenio dangling off the saddle.

It would have been anti-climactic if it hadn’t been so beautiful. The process was like watching a seduction. 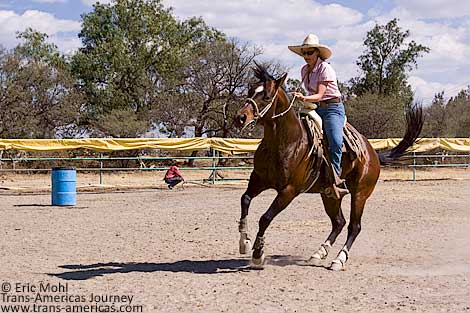 Karen doing two things for the first time on horseback: riding a stallion and initiating a spin.

Yet another side of the rich world of horses in Lagos de Moreno is presided over by  Jorge Guillermo who trains Friesians sent to him by owners around the world. His stable is 5 star (we’re fairly sure the horses drink Perrier) and the horses are 6 star. While it’s all way too fancy for every day riding, the animals are gorgeous and Jorge makes the most of all of their many wonderful natural attributes. 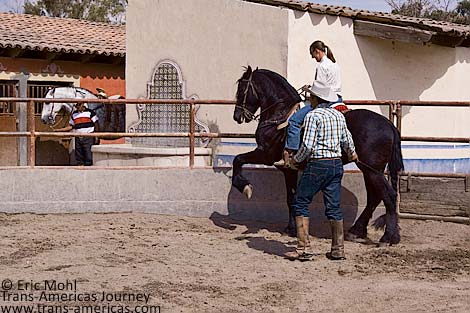 Yes, it’s weird when the horse you’re riding is better educated than you are. 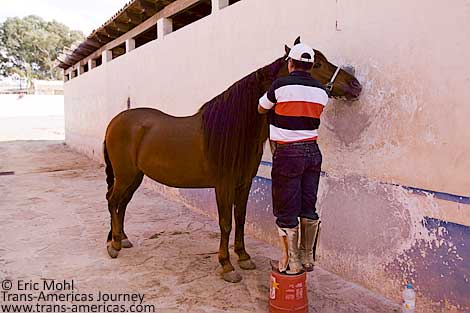 The Friesian horses that are sent to Jorge Guillermo in Lagos de Moreno for training are treated like the supermodels that they are.

All of these trainers use different styles to achieve different goals with different types of horses. What they have in common, however, is deep knowledge and talent that they’re not selfish or possessive about. Like every horseman and horsewoman we met in Lagos, they want more people to ride better and they’re happy to share what they know. You learn a lot from just watching guys like Juan and Eugenio and Jorge.

Watch the horse trainers of Lagos de Moreno in action in our video, below.