Cartagena, Colombia has drawn us back again and again with its languid Caribbean vibe, intense history, gorgeous restored colonial architecture, and sprawling historic center which has been a UNESCO World Heritage site since 1984. Cartagena is also home to many of the best hotels in Colombia, from budget to blow out. All that choice can be overwhelming, but we’ve spent more two months exploring the city during multiple visits, and we’re here to help with our City Travel Guide about 9 top hotels in Cartagena. 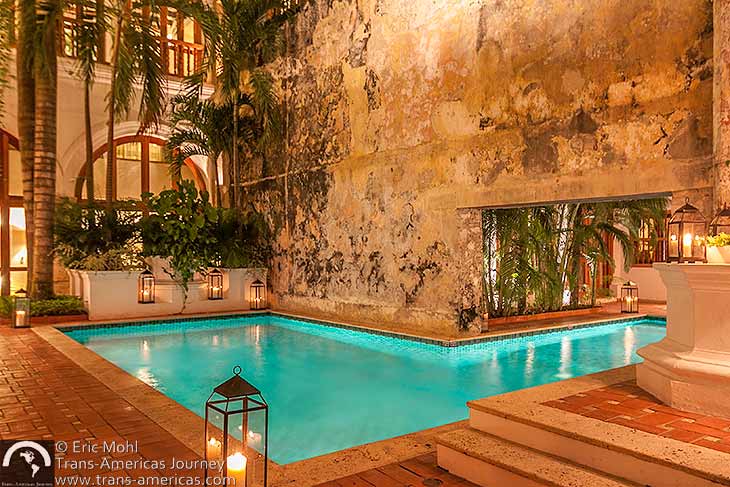 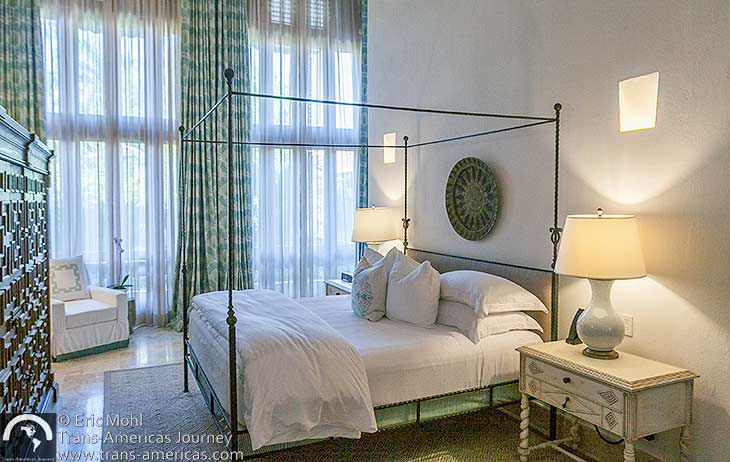 The lap of luxury at Hotel Casa San Agustin in Cartagena. 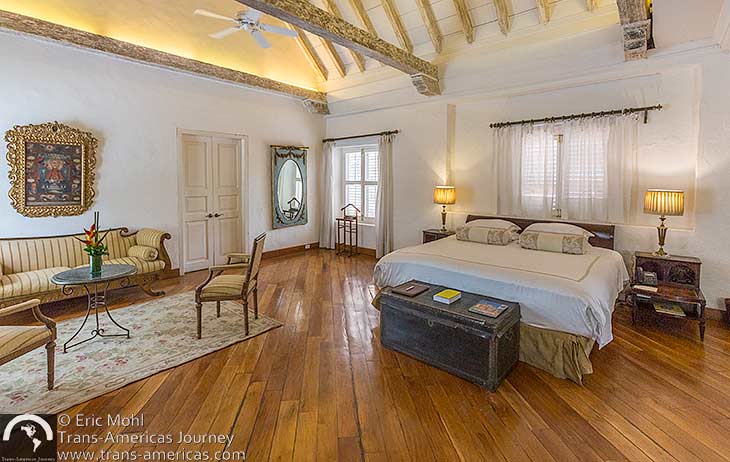 One of the antique-filled rooms at spacious, serene, and authentic Hotel Casa Pestagua in Cartagena, Colombia.

Cartagena is full of hotels crafted in the renovated remains of very, very old buildings. Casa Pestagua, in a mansion built in the 17th century, is not the fanciest or slickest of them but it is the most authentic, full of antiques, elaborate frescoes, and original carved wooden ceilings. There are only eleven rooms, all of which are set around a double interior courtyard and garden with a reflecting fountain, an al fresco restaurant, an outdoor bar, small spa, and a large swimming pool shaded by a massive mango tree. The free 15-minute foot massage is a brilliant touch in a city that requires so much walking on cobblestones. This hotel was recently included in the exclusive Relais & Chateaux group of hotels and is, as of this writing, the only Relais & Chateaux hotel in Colombia.
Book Now 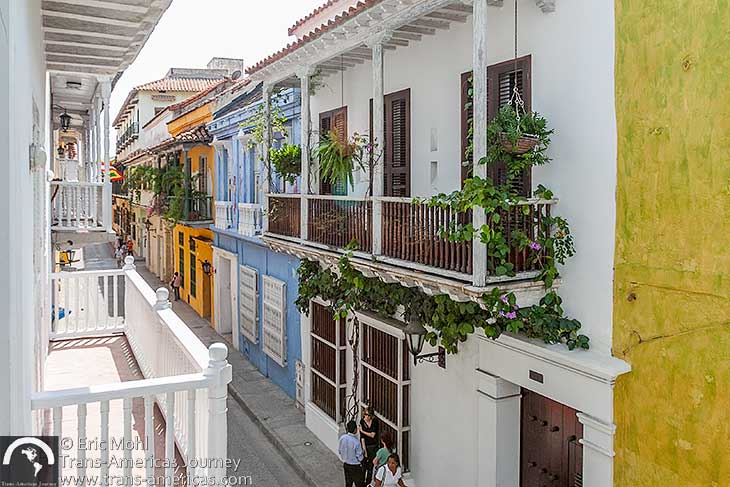 The view of gorgeous colonial architecture from the balcony of room #2 at Hotel LM in Cartagena, Colombia.

We have never felt as welcome as we did when we checked into Hotel LM thanks to a flawlessly hospitable staff (Spanish only) and a private home feeling. Room #2 is the winner with a small patio that is the perfect photographic vantage point for capturing Cartagena’s famous colonial architecture spooling out along the street below.
Book Now 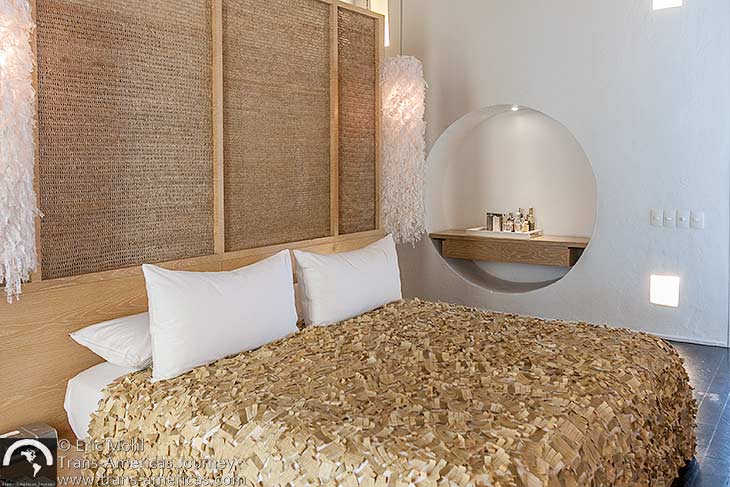 The decor at Tcherassi Hotel & Spa in Cartagena wasn’t our style, but the hotel has much else to recommend it.

Though the decor was not our style (a bit like a prom dress exploded in every room), we did appreciate the lovely daily breakfast and the dehumidifiers in each room. And the suite at Tcherassi Mansion, created by Colombian fashion designer Silvia Tcherassi, is a stunner with multiple levels of space, private patios, and even a private plunge pool. Now open as well is Tcherassi Hotel & Spa, a new hotel around the corner with 42 much less foofy rooms, two restaurants, and a boutique.
Book Now 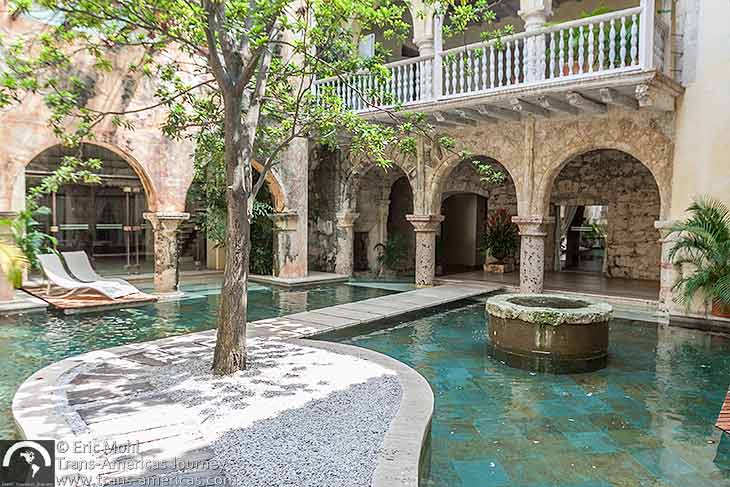 Casa Pombo in Cartagena, Colombia where foundations that date back to 1533 meet sleek, modern design.

No hotel in Cartagena does a better job of combining architectural heritage with modern design than Casa Pombo. Five incredibly large, thoroughly sleek and modern luxury apartments have been accommodated within the walls of one of the oldest buildings in Cartagena. Parts of the foundation date back to 1533 and teams of restorers spent months carefully revealing and preserving original frescoes and other treasures. There’s no sign for Casa Pombo and the atmosphere is private and casual, like being at home only much, much swankier. The entry way features one of the most breathtaking decorative lobby pools we’ve ever seen.
Book Now 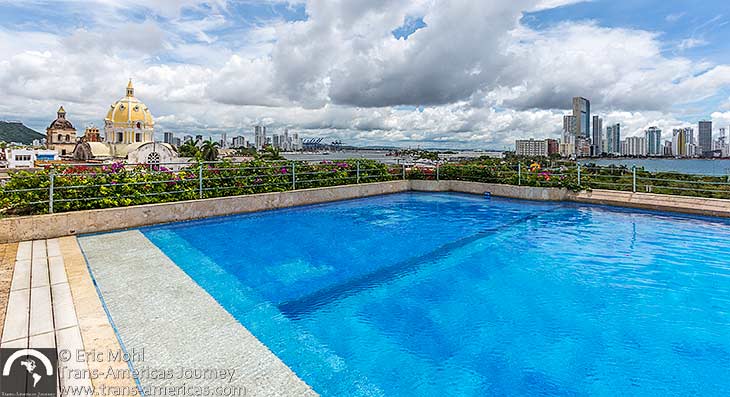 The rooftop pool area of the Charleston Santa Teresa Hotel has a resort feeling and fantastic views of the historic city center and the sea.

The Charleston Santa Teresa Hotel is a classic in the historic center. It’s got 87 rooms, a full-service spa, and a rooftop pool area that feels like a resort and has terrific views over the historic center and the sea thanks to its privileged position on the 6th floor (most buildings in the center are lower). The hotel is also home to Colombian celebrity chef Harry Sasson’s only restaurant in Cartagena. The iconic deeply persimmon-colored building was a Carmelite nunnery, a hospital, and a police station before being converted into a hotel in the 1990s and the building retains colonial and Republican design elements. Bikes are available to guests free of charge and you can’t beat the location right next to a section of the historic wall that surrounds this part of the city and facing Plaza de Santa Teresa which is part of the hotel an the only private plaza in the city. If you’re looking for a hotel with a full roster of services in the historic center, this is the place.
Book Now 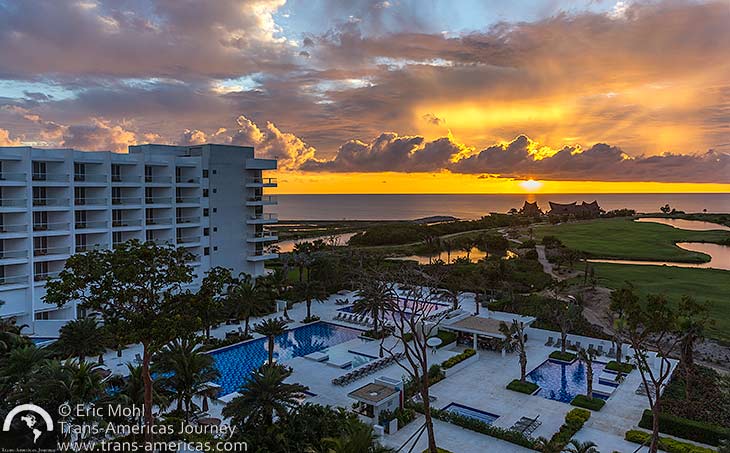 The sunsets are amazing at the Conrad Cartagena.

True, the Conrad Cartagena is an enormous multi-national resort and it’s not located in the historic center of Cartagena (it’s near the beach about 30 minutes from the city). However, we were very pleasantly surprised by the amount of Colombian style and personality at the Conrad which has 268 rooms, an enormous spa and is adjacent to an 18-hole golf course which is the only course in South America which conforms to Tournament Players Club (TPC) standards. The Conrad Cartagena also offers multiple bars and restaurants, four pools, a beach club, and lots of art by Colombian superstars including Pedro Ruiz and Anna Mercedes Hoyos which lends a bit of local style. All rooms are large (the smallest is more than 530 square feet) and all rooms have at least a partial view of the sea which is great because the sunsets are spectacular. A free shuttle to and from the historic city center is offered and the hotel also has an all-inclusive package that’s a no-brainer. If you’re a golfer (or you travel with one) or if you’re looking for a relaxing resort getaway, this is your best bet near Cartagena.
Book Now

Best Cartagena hotels on a budget

Cartagena is more expensive than the rest of Colombia, and that extends to hotels. But there are mid-range and budget options and we have two to recommend. 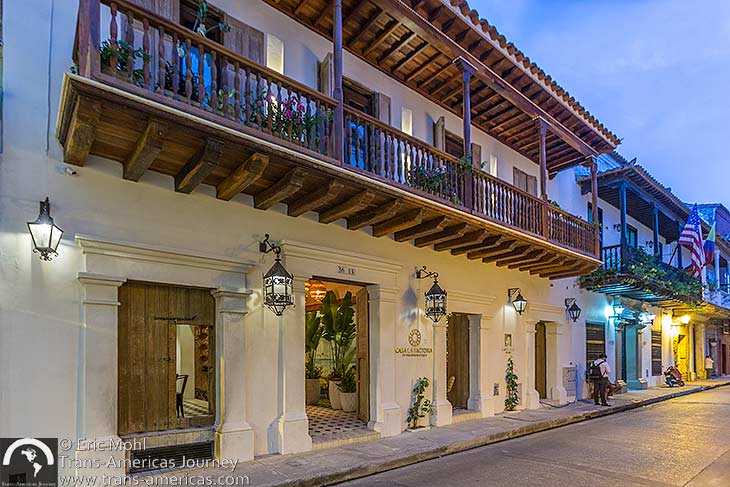 The Hotel Casa La Factoria is in what was once a private house built during the colonial period.

A solid mid-range option in the historic city center is Hotel Casa La Factoria by Faranda Boutique. Many of the 28 rooms are on the small side and if natural light is important to you, book rooms 209, 309, or 409. They have big glass doors and views of the lobby pool which is inviting and includes a unique underground jetted tub built under a brick bridge which was part of the original construction as a private home known as Casa Barroso. Though official rack rates start at US$250 you can often find rates at this hotel for half that much on booking.com and other search engines. In Cartagena, a real hotel room for around US$150 is considered mid-range. Be prepared to climb a lot of stairs. There is no elevator.
Book Now

Hotel Villa Colonial in the Getsemani neighborhood of Cartagena (not to be confused with its nearby, slightly pricier sister the Casa Villa Colonial) is a great truly budget option. It does not have dorm rooms, but its prices for clean, comfortable, private rooms (doubles are around US$45 with breakfast and A/C) are the same or even cheaper than rates at decent area hostels and there’s a kitchen for guest use. The helpful host, Martha, has a delightful “Glenda the Good Witch” personality and optimism that’s free of charge.
Book Now

Continue your Cartagena trip planning with our complete city travel guide to Cartagena, Colombia which covers, bars, restaurants, activities, and the general beauty of this city.