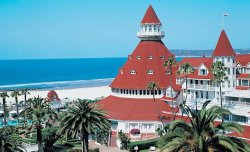 I was hoping to see the ghost of Marilyn Monroe who stayed at the Hotel del Coronado  while she was filming “Some Like it Hot” at the property in 1958. Instead, I got very real Navy Seals. On the first night of my stay I flung open the doors onto the huge patio off my one bedroom suite and saw lights flashing erratically in the distance. Then I heard muted shouts as soggy soldiers emerged from the surf, rafts in tow, and struggled onto the beach below my room. I’d checked in during Hell Week, the annual training blitz that all aspiring Navy Seals must survive before graduating from the academy located down the road from the hotel.

I should not have been surprised since the hotel, which was built in 1888, has a long history with the military stationed on Coronado Island near San Diego. During both WWI and WWII the hotel was used as an R&R destination for troops and I am pleased to learn that during WWII the enormous and airy room I was staying in was used exclusively by officers.

The Hotel Del Coronado was designated a National Historic Landmark in 1977 and was named one of America’s Dozen Distinctive Destinations by the National Trust for Historic Preservation in 2003. These are certainly rare honors that acknowledge the rarity of classic wooden hotels as well as the hotel’s architectural and historical legacy. But the listings also bind the Hotel Del, as the iconic property is affectionately known, to certain rules governing preservation and renovation. 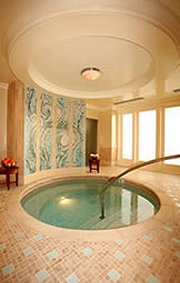 But that hasn’t stopped the hotel from carefully changing with the times and the property is currently in the midst of a 15 year plan of renovations and new amenities which began in 2005. One recent addition that I think Marilyn would have particularly approved of is the new Spa at the Del. Opened in early 2007, the spa boasts 21 treatment rooms, a fitness facility and a private veranda with an infinity edge pool with a view of the Pacific.

The extensive spa menu includes all the usual suspects and then some. Try the Signature Del Massage ($145-$225), which is customized to include exactly the type of body work you need (sports, Swedish and Asian techniques are used) using a warm massage lotion in your choice of scent.

The spa also offers treatments that have clearly been inspired by the hotel’s location on 28 seaside acres. The Sea Creation Facial is one of the most innovative, employing warm seashells to boost the anti-aging treatment ($225). Touches like these helped make the Spa at the Del one of only 75 spas in the world to find a place on the 2007 Conde Nast Traveler Hot List.

Somehow, the “Grand Lady By the Sea” has managed to integrate modern amenities and services like these while retaining the charms of its 115 year old Victorian building—including beautifully polished wood floors, staircases and banisters that occasionally roller coaster just slightly from decades of use and an elegant filigree-encased elevator that’s still manned by a uniformed operator.

Most rooms in the original Victorian building didn’t have private bathrooms when the hotel first opened but they did have fireplaces. These days in-room fireplaces are mostly gone and all rooms have bathrooms with classic modern fixtures, products from the hotel’s spa and marble all around. Room size does vary greatly in the rambling main building, so ask about square footage before booking. 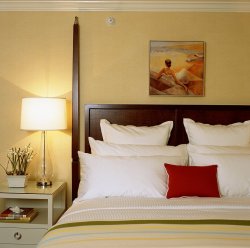 Added to the property in the 1970s, the Ocean Tower just benefited from a top-to-bottom overhaul of rooms. Completed in June of 2007, renovated rooms now sport warm and festive shades of cranberry and lime, sleek glass lamps and stylish but welcoming furniture which looks great but also invites you to sit and relax. New bathrooms are accented with dark wood and tons of white marble, adding to a final look that’s sunnier and chicer than the old Ocean Tower décor which is best described as “Tiki Florida.” Another benefit of booking a room in the Ocean Tower is the added privacy of having a separate entrance and a separate pool.

The Hotel Del Coronado also has an entire floor of shops, but I can only hope they’re the next target for a facelift since the existing vendors are nothing to write home about and the overall shopping environment is uninspired. Spend your money at the spa (or the newly opened 1500 Ocean restaurant) instead.

With a 757 rooms, there’s a look and feel for everyone at the Hotel Del Coronado and when you make your booking you can request a room in either the historic Victorian building or the Ocean Tower and you can also ask for a room with a balcony (major bonus). Though building and balcony choice can’t always be guaranteed, what can be counted on is a Marilyn sighting since the hotel’s in-house TV channel plays “Some Like It Hot” on a continuous loop.