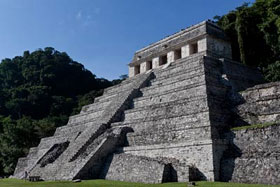 The Mayan ruins at Palenque in Chiapas, Mexico are world-class.  The famous Reina Roja (red queen) was discovered here and one of the most accomplished and long-lived Mayan rulers, Pakal the Great, lead Palenque with vision and creativity. Pakal was buried in an elaborate sarcophagus that wasn’t even discovered underneath the site’s Temple of the Inscriptions until 1952 and new treasures are still being discovered at the site today.

Given the thousands of tourists who visit Palenque every year it’s amazing that there’s never been a world-class hotel anywhere near one of Mexico’s richest and most popular archaeological sites. 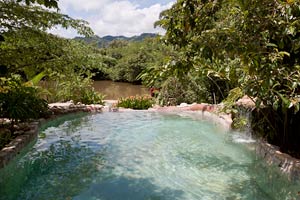 The seven room Boutique Hotel Quinta Chanabnal opened its doors in April. Less than two miles from the Palenque ruins, the hotel is set in a lush private garden with a multi-level pool and rock-wall waterfall,  a pool-side massage room and Wi-Fi.
That’s all lovely. But what really sets Boutique Hotel Quinta Chanabnal apart is its creators. Raphael Tunesi and his wife Elizabeth Gomez have lived and traveled around the world. Inspired by the culturally rich luxury hotels they love in India and Bali, the couple spent years designing and planning a hotel that respects and draws upon classic Mayan architecture, art, cuisine and culture but which also imparts a distinctly Asian sense or serenity. 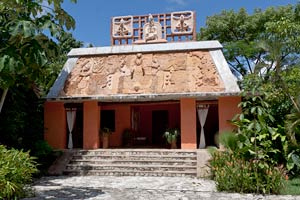 The vaulted palapa-roofed reception area and dining room is anchored by four enormous carved stone slabs in the Mayan style featuring Mayan-era hieroglyphics. But these are not mere copies. These carvings slyly tell the tale of milestones in Raphael and Elizabeth’s life (the birth of their daughter, the building of the hotel, etc). Along with Mexican and International favorites, the hotel kitchen turns out traditionally-prepared regional dishes, some of which date back to Mayan times, including a delicious (if labor intensive) dish of river snails in a rich deeply green soup.

The hotel’s presidential suite (where the American Ambassador to Mexico, Carlos Pascual, and his family recently stayed) is in a stand-alone building that isn’t merely a copy of a Mayan temple, it’s a detail-perfect brand new creation—with a thoroughly modern interior, of course. The hotel also has four junior suites which have two king beds each and two deluxe suites which have one king bed and a large sitting area. All suites are furnished with custom-made furniture and decorated with pillow cases made from sari fabric and framed examples of Guatemalan traditional woven fabrics.

This is all possible because Raphael isn’t just a seasoned traveler-turned-hotelier—he’s also a Mayanist with a specialty in Mayan hieroglyphics. He has an unbridled passion for Palenque (he and his wife even met at the crystal-clear waterfall that runs through the site) and the hotel is an extension of that. In fact, one of the unadvertised perks of stay at Boutique Hotel Quinta Chanabnal is that it doesn’t take much coaxing to get Raphael to accompany you on your tour of Palenque where his perspective and expertise will enhance your enjoyment and understanding of one of the largest and most important Mayan cities.