Is this the Hottest Hotel in Playa del Carmen?

High design meets high testosterone at Playa del Carmen’s Hotel Reina Roja, one of the most unique (and sexiest) hotels in Mexico. 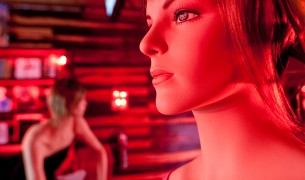 Even in hotel-packed Playa del Carmen, the Hotel Reina Roja stands out. Thousands of red light bulbs – inside and out – emit a kind of beach bordello glow. And those female mannequins posed in the lobby and on the hotel’s balconies? They only add to the sense that a particularly avant-garde building from Amsterdam’s red light district has somehow been transported to the beach in southern Mexico.

Of course, we had to check it out, so we checked in.

The Reina Roja (which means ‘Red Queen’ in Spanish) is owned and designed by architect Alejandro Alarcon Fierro from Mexico City, who calls his creation a “Mexican emergent architecture theme hotel.” That about sums it up if your theme involves sex and style.

The hotel employs a militantly red and black colour scheme and the maids brush the mannequins’ wigs daily (we’re not kidding!). There are also a number of suggestive murals in many of the rooms and photo-booth-style strips of images of a bathing-suit-clad model paper the elevators.

Our room had more than its fair share of mirrors and we really wouldn’t have been surprised to learn that cameras had been installed too – maybe even one-way glass. Common areas were dimly lit, making the vacant gazes of the mannequins that much more unnerving.

Let’s just say the voyeur/exhibitionist/friendly vibe was palpable. It took a couple of days to get used to the feeling of being in a (blue) movie set, but once we just accepted it, the hotel started to feel like a fun theme park for grown-ups!

Our review of this hotel was originally published by Travel + Escape