There’s a hotel for every traveler and every travel budget in Bogotá, Colombia. Here’s our city travel guide covering 9 top hotels from the best of the best in Bogotá. 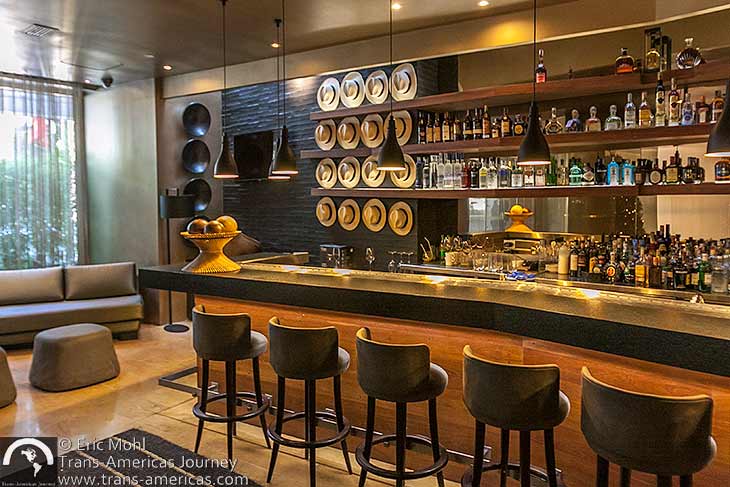 The lobby bar at the B.O.G. Hotel in Bogotá, Colombia.

Hotel B.O.G. is the city’s most luxurious boutique hotel. There’s a rooftop pool and bar, rooms feature the best showers in the city, and the hotel is about to unveil a new restaurant under the watchful eye of one of the city’s top chefs. Find out more in our feature about the B.O.G. Hotel for Luxe Beat Magazine.
Book Now 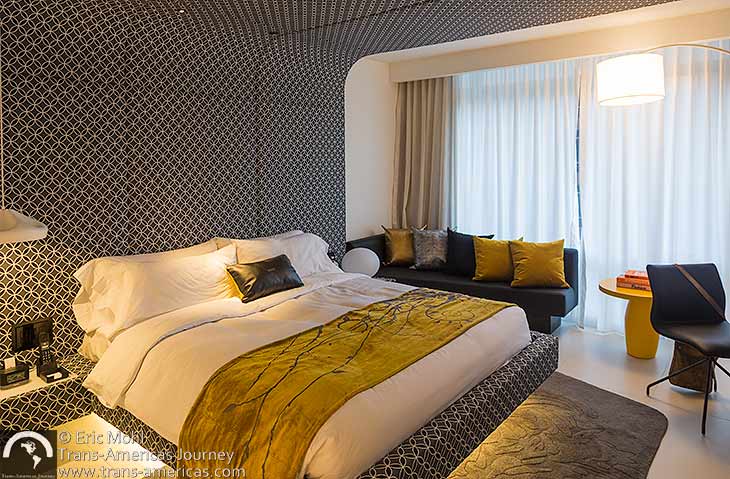 Our room at the W Bogotá. The pillow on the bed says “Gold Digger.”

Bogotá has many international chain hotels but the most distinct is the W Bogotá in the Usaquen neighborhood. The hotel manages to be part of a huge international chain but also give a sense of place and it’s a great base for exploring the city and, in particular, getting to know the reinvigorated Usaquen neighborhood. Read more in our review of the W Hotel Bogotá for Luxury Latin America.
Book Now

The hippest hotel in Bogotá is the Click Clack Hotel where rooms come in XS, S, M, L, or XL, room service is delivered in picnic baskets, and the innovative owners are always looking for new ways to undo the hotel rules. They plan to open a second Click Clack in Medellin in 2019.
Book Now 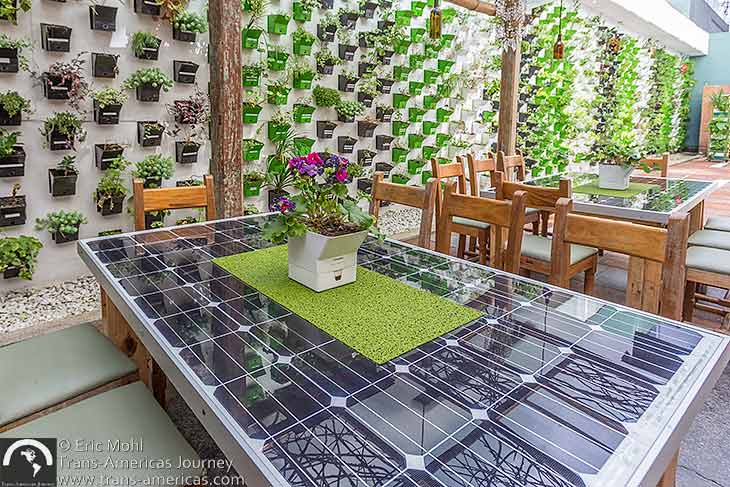 Biohotel Organic Suites, in the Usaquen neighborhood, is owned by a Colombian who’s serious about sustainability. Notable eco features at the hotel, which was built using the criteria for LEED gold certification, include: bamboo flooring, no PVC, two machines in the top floor gym that generate electricity as you work out, living walls and vertical gardens, no air conditioning, water restrictors on faucets, permanent containers of biodegradable toiletries in bathrooms to reduce plastic waste, 72 solar panels on the roof which provide 30% of the hotel’s electricity needs (old panels are used as table tops in the hotel’s bar), an onsite grey water treatment system and rain water collection cistern, hot water pipes in the walls to heat the hotel (this is the only hotel in Colombia that does this), a biodiesel backup generator, wood used in construction is certified to have been harvested and replaced, atrium-style lobby to maximize natural light with self-rotating panels that reflect the sun, perforations in the structure to encourage fresh air flow, carpets made from 100% recycled materials, and more. Employees of the hotel also get recycling bins for their homes after a few months of service and the employee that reduced at home water use the most in the year gets a bicycle. The hotel also hosts monthly events for kids to learn about sustainability.
Book Now 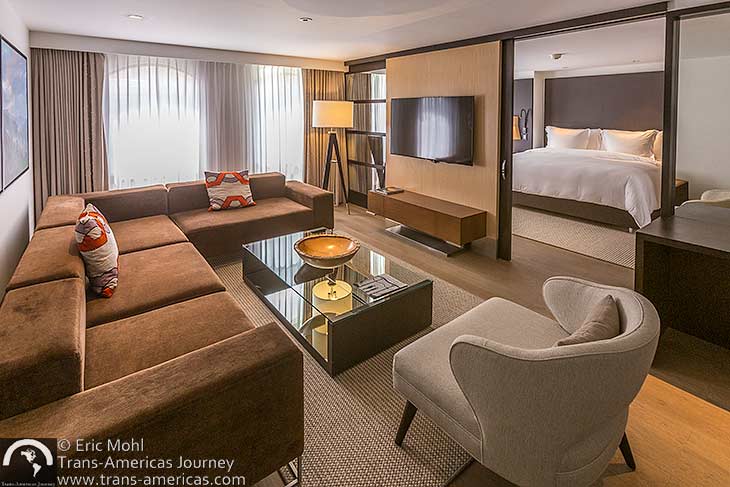 Suites, like this one, make up the bulk of the rooms at the Four Seasons Bogotá.

Bogotá has not one, but two Four Seasons hotels and they are both great in their own distinct ways. The Four Seasons Hotel Bogotá, in the Zona T area of the city, is a sleek stay for both business and leisure travelers. It’s offers everything a business traveler needs to get work done and then relax including the best hotel spa in the city and next door neighbor, Nemo restaurant which is the latest offering from Colombian celebrity chef Harry Sasson and it’s fantastic. The breakfast buffet at Nemo for guests of the Four Seasons Bogotá is epic.
Book Now 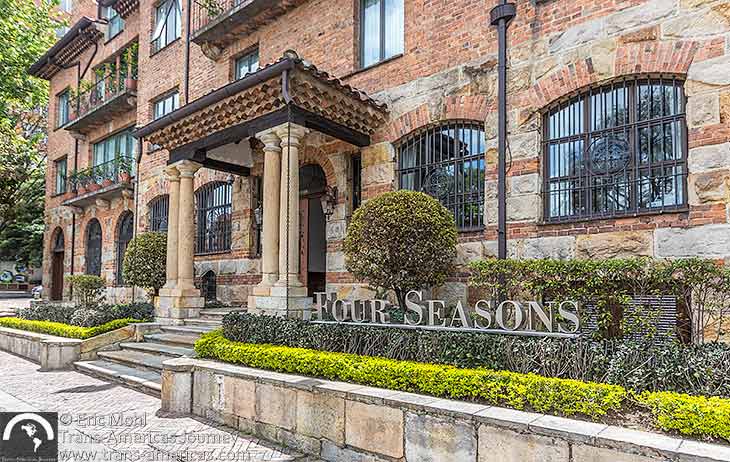 The Four Seasons Casa Medina is in a historic private mansion and it shows.

The Four Seasons Hotel Casa Medina, on the other hand, is all leisure, all the time. It’s not that you couldn’t stay here on business, it’s just that the homey atmosphere (the hotel is in a former family mansion near Zona G), art, history, and tempting Sunday brunch are major distractions. There’s more in our full review of the Four Seasons Hotel Casa Medina for Luxury Latin America.
Book Now 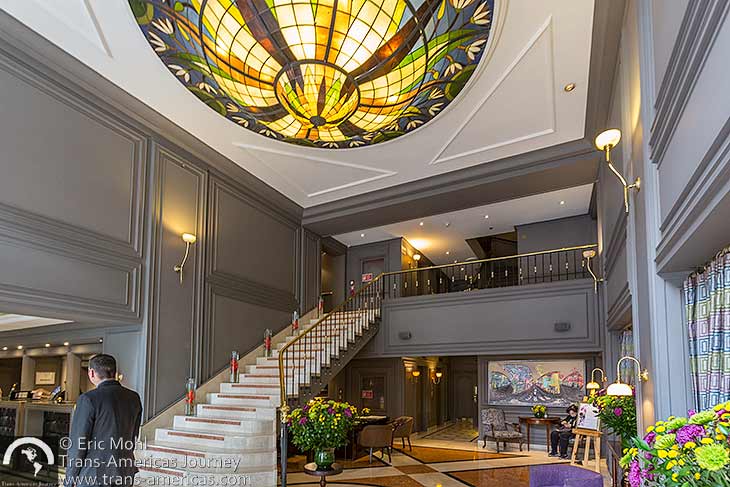 The stained glass orb above the lobby of the Sofitel Bogotá Victoria Regia depicts a giant water lily which the hotel is named after.

Also in Zona T is the Sofitel Bogotá Victoria Regia which brings French flair and some unique offerings including special amenities for female guests, the most awarded concierge in the city, and free use of cars and drivers during certain hours in a radius around the hotel. There’s more in our full review of the Sofitel Bogotá Victoria Regia hotel for Luxury Latin America.
Book Now

At 170,000COP/about US$60 for a small room with a double bed for two including breakfast, Casa Platypus is far from the cheapest option in the city, but this stylish, serene place fills a mid-range void and the La Candelaria neighborhood location is great. Parking and all-day coffee are also available and the owner and his staff are great sources of information. There’s also a spotless kitchen that guests can use, but you won’t want to. Did we mention the fabulous food scene in Bogotá?
Book Now 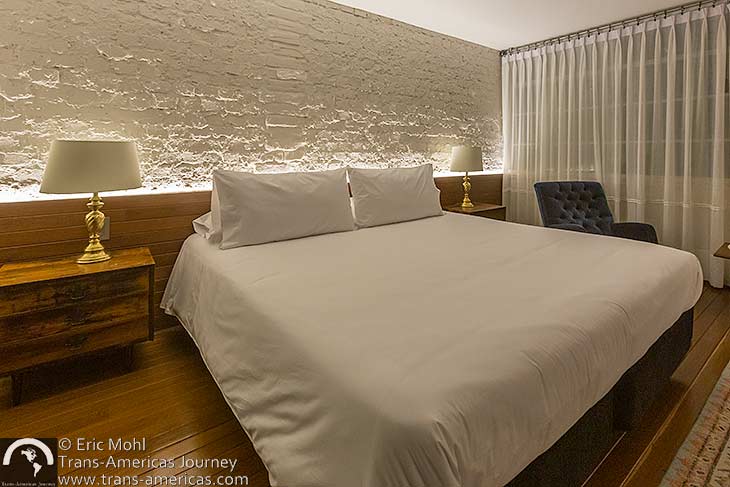 Style and value at Casa Lelyte.

Opened in 2017, the four rooms at Casa Leyte, in the Chapinero Alto neighborhood, represent tremendous value (rooms from around US$100) and tremendous style (the modern art rotates regularly and is for sale and rooms are filled with restored antiques). Guests also get great proximity to the vegetarian and vegan restaurant of the same name downstairs.
Book Now

A budget hotel winner in Bogotá

Bogotá is bursting with hostels too. The only one we stayed at was La Pinta Hostel in the Chapinero neighborhood. It was funky, clean, laid back, and quiet. The bilingual staff was helpful and they’ve got a sister hostel in Cali (it’s called La Pinta Boogaloo which has a pool) and an apartment rental in Cartagena and in Santa Marta.
Book Now