You will not want to spend a night in Managua. It’s a sprawling, unattractive, hot, dusty, sometimes dangerous town, much of which is still in ruins from a 1972 earthquake and general malaise and mismanagement. You may, however, need to spend a night in Managua in order to catch your flight home or fly out to Big Corn Island or because you’re a serial completionist like us. Whatever the reason, you’ll need the vital details in this city travel guide about hotels in Managua. 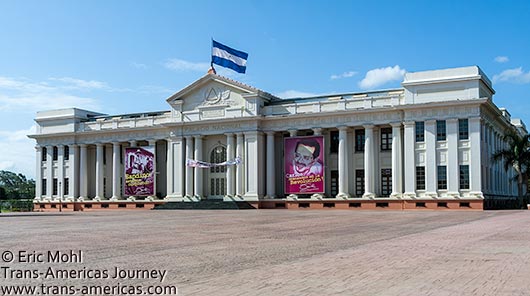 The National Palace of Culture is one of the very, very few sights to see in Managua, Nicaragua.

The Marta Quezada Barrio in Managua is full of budget hotels and hostels. We chose Hotel Los Felipe (US$20 for a tiny double room with private bathroom) because it has a huge and secure parking lot. What it doesn’t have is a very good maid. However, we stayed here on four separate occasions and never caught anything and there seemed to be new management the last time we checked in. The caged birds in the surrounding garden are weird. Ask for a room close to reception if Wi-Fi is important to you. There is a pool. An awesome cheap (around US$2.50) breakfast can be had at Cafe Myrna around the corner and Fritanga Dona Pilar serves up big plates of fresh-grilled meat, gallo pinto and tajadas nearby from about US$3. 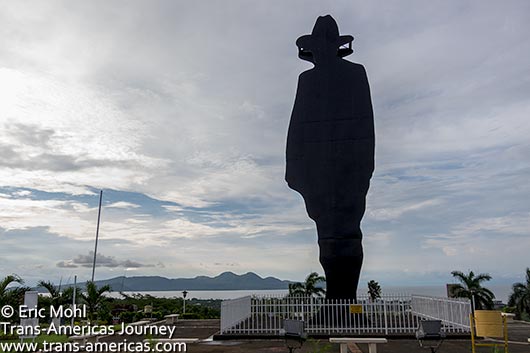 This metal cut-out silhouette of Augusto César Sandino, who lead a Nicaraguan rebellion against US military occupation in the late 1920s and early 1930s, is located on a hilltop above Managua, Nicaragua.

Many of the mid-range hotels in Managua are to be found in neighborhoods in the outskirts f the city in renovated homes. Boutique Hotel Villa Maya is no exception. The place is run by Vilma, a Guatemalan woman who went to college at UC Berkeley then married a Nicaraguan and moved to Managua.

She’s turned the family’s huge home into a serene nine-room guest house decked out in gorgeous Guatemalan textiles, huipiles (traditional Mayan blouses), hand-made Guatemalan wooden furniture and museum-worthy Mayan pottery. There’s a pool and the staff is so friendly you can’t help but smile. Unlike some homes-cum-hotels, this one feels well-thought-out not willy-nilly.

The most remarkable thing is the peace and quite just a few miles from crazy central Managua. We were lulled to sleep by the sound of frogs in the enormous garden and awoken by birds in the trees. Full breakfast is included in room rates and served on a spacious patio. 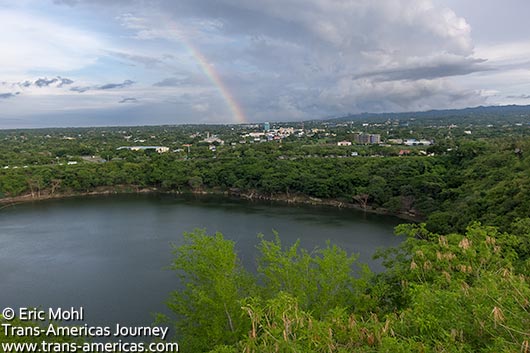 Lake Tiscapa Natural Reserve is located in a volcanic crater in the middle of Managua.

More centrally-located is the Hotel Estancia La Casona, from US$40 per night including breakfast. This home, built in the ’70s, has been meticulously converted into a comfortable and homey place to spend a night or two. You’ll feel like you’re crashing at your aunt’s house but with more privacy. Owner Maria Teresa also owns Cafe Hotel in Jinotega. 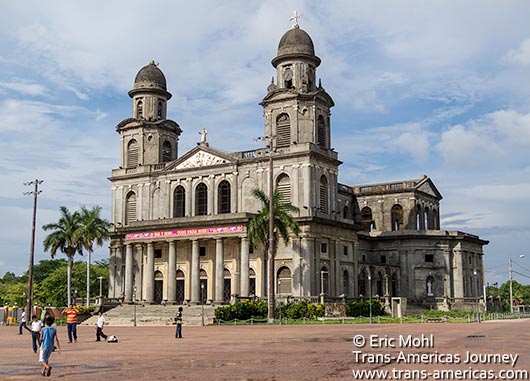 The Old Cathedral of Managua was destroyed in the 1972 earthquake and has never been rebuilt. It’s now a fairly sketchy shell.

In addition to a few luxury business hotel chain brands which never, ever interest us, including Hilton and InterContinental, Managua also has a handful of locally-owned hotel that are doing their best to be stylish boutique hotels. Hotel Contempo is one of them. The hotel itself is much more stylish than average, even if they’re channeling a Miami vibe a bit too hard. 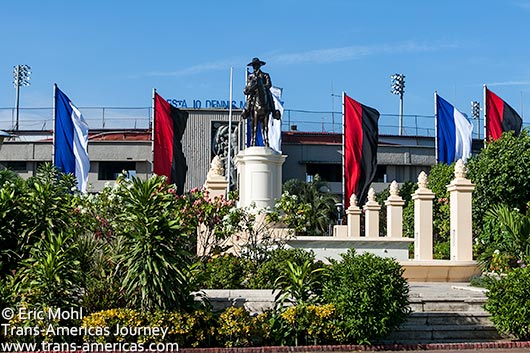 Two Nicaraguan heroes are immortalized here: baseball player Dennis Martinez has his name on this stadium and revolutionary Augusto César Sandino is depicted in a statue in front.