We should be in Africa right now. Instead, we’re in the Americas in the midst of our Trans-Americas Journey road trip. What does that have to do with the terrorist attacks of September 11, 2001–a series of tragedies that changed so many people’s lives? Everything.

On September 10, 2001, we were living in lower Manhattan less than three blocks from the World Trade Center where we were happily in the throes of planning our next big trip: an overland exploration of Africa. The next day we, like millions of others, were forced to re-think many things.

We never for a minute considered giving up our next big trip. We know that more travel equals more understanding which equals less hatred and violence. Previous trips through Islamic countries (Pakistan, Indonesia, Egypt, Turkey) gave us a modicum of perspective in the often perspective-less aftermath of the 9/11 attacks and we valued that. 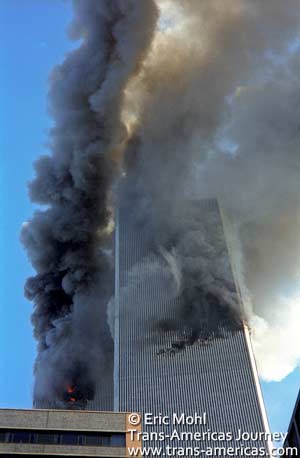 This photo was taken from the roof of our apartment building minutes after the second plane went into the South (nearest to us) tower.

Suddenly, going to Africa as we’d been planning seemed random. Haphazard. Not of the moment. Why, we wondered, are we always traveling so far from home (Europe, Asia, Australia)? And what’s home all about now anyway? And while we’re on the subject, what’s our role in the world personally and as citizens of the United States? Do “they” really hate “us” as the President said? Who are they? Who are us? And when did the United States become blue or red?

As citizens of so many terror-stricken countries around the world know, being attacked makes you ask questions like that.

Not only did our home, or own backyard no longer make sense to us as we watched citizen after citizen squander their 15 seconds of fame ranting about “us” getting “them”, we were also homeless. For three months after 9/11 we could not return to our apartment building, less than three blocks south of the Twin Towers, because it was well within the primary crime scene.

Investigators were busy looking for clues in the landing gear which ended up in front of our building, the chilling human remains that seemed to be everywhere, the thick layer of dust on everything, and God knows what else. There was no room for residents hungry for something normal like the familiar drip of the shower or the bark of the dog across the hall.

Eric spent the morning of the attacks on our roof taking pictures of the increasingly confusing and horrifying events and experiencing the collapse of both buildings before eventually evacuating lower Manhattan by ferry to New Jersey. 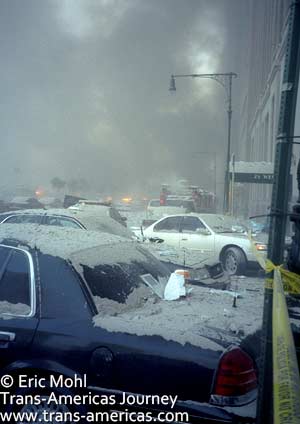 This photo was taken from in front of our apartment building (the green awning was our building) about a minute before the second tower collapsed. The yellow police tape marks where part of the landing gear from one of the planes fell.

Most of Eric’s photographs from that day are back in New York and no one needs another post full of horrific images (they’re seared into our brains anyway). We’ve included a chaste few here. In a disturbing bit of coincidence, a picture of Eric, waiting to evacuate from our apartment building on that terrible day, was recently published on the Time-Life website. 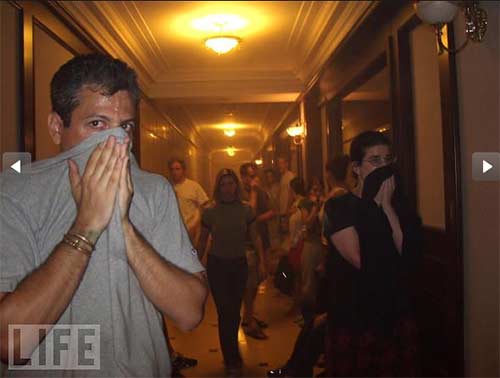 Eric in the lobby of our apartment building minutes after the first tower collapsed. The picture, taken by Hiro Oshima, was published in a LIFE photo gallery captioned “Residents flee their apartment building near the scene of the World Trade Center Attack.”

Unable to return home (that word again), we were soon living in the Soho Grand hotel with other neighborhood refugees (eternal thanks to the hotel for its generosity and understanding and to our insurance company State Farm). We had time to think and pretty soon we realized that what we needed as much as our apartment back were answers to the big questions we’d started asking as a reaction to the political spin on the attacks and the non-stop and often simplistic media coverage. 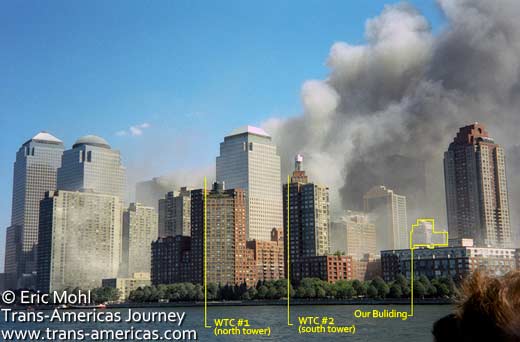 This photo, of lower Manhattan about an hour after the second tower fell, was taken from a tug boat on which Eric was evacuated to New Jersey. The location of our building and where the towers stood is noted in yellow.

How 9/11 helped create the Trans-Americas Journey

Our answer was to completely re-think our trip, shifting gears to focus on really seeing and understanding America. The Trans-Americas Journey was born. Since a road trip through just the United States was not nearly ambitious enough we expanded the plan to include all of the Americas with an emphasis on the plural nature of that term. It’s a fact that within the American continent we are all Americans, not just those in the US.

This felt right. Part of the problem, it seems to us, is the fact that some people act like they’re solely from one place or one ideology when, in truth, we’re all from right here on this planet and we’re all connected. As our road trip route through the American continent (from the Arctic to Tierra del Fuego) is meant to demonstrate, we are all neighbors. We should treat each other that way. 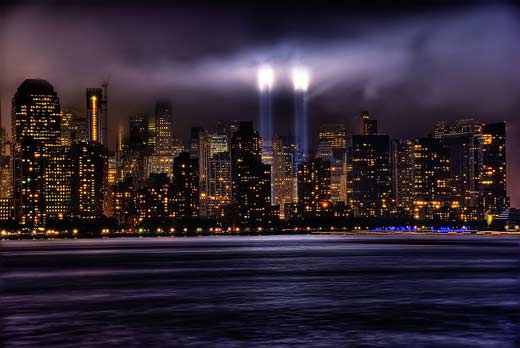