How to Plan Your Galapagos Islands Trip in Ecuador 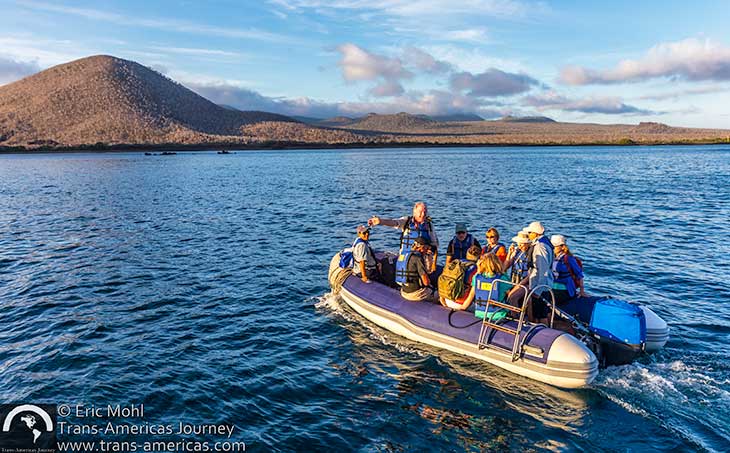 This could be you: a group of tourists travel by dinghy to one of the islands in the Galapagos archipelago.

Where are the Galapagos Islands?

The predominant theory (though sometimes contested) is that the Spanish named the Galapagos Islands galopegos which meant saddle and tortoise in old Spanish in a reference to the saddle-like shape of some tortoise shells. The archipelago is located in the Pacific Ocean approximately 600 miles (965 km) from mainland Ecuador. The 61 islands and islets in the archipelago, which formed three to five million years ago, include the 13 main islands of San Cristobal, Santa Cruz, Baltra, Espanola, Santa Fe, Fernandina, Genovesa, Santiago, Isabela, Floreana, Santiago. 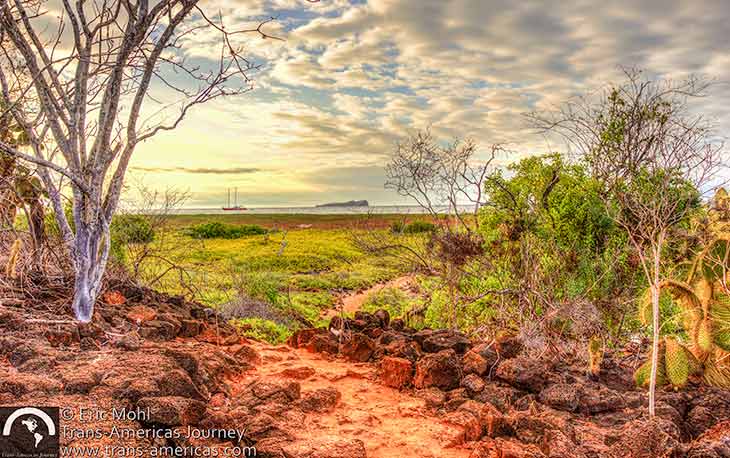 Dragon Hill on Santa Cruz Island is a good example of the arid, lightly-vegetated, volcanic landscape of many of the islands in the Galapagos.

The islands were formed volcanically and feature large lava flows which give way to white sand, red sand, and black sand beaches studded with many dramatic bays and inlets. You can see more of the beauty of this place in our photo essay about the landscapes of the Galapagos.

Humans of the Galapagos

The Galapagos Islands were discovered by chance in 1535 by Father Tomas Berlanga who was the Bishop of Panama. In the 1800s, pirates and intrepid explorers started using the Galapagos Islands as a safe haven from storms and a source of fresh water and food.

The most famous early visitor, naturalist Charles Darwin, arrived in 1835 and spent 19 days studying the flora and fauna of the archipelago. In 1859, Darwin finally published his finding in On the Origin of Species, which introduced his theory of evolution–and the Galapagos Islands–to the world. 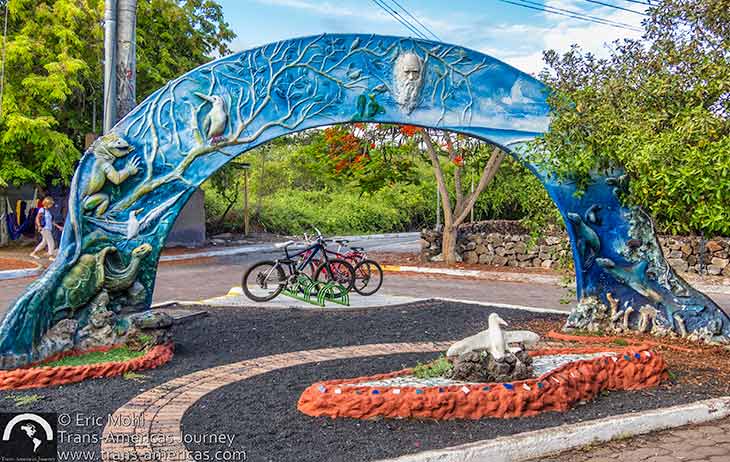 An artistic ode to the most famous visitor to the Galapagos Islands in Darwin Plaza on Santa Cruz Island.

In the 1900s, a handful of Europeans arrived and settled in the Galapagos, including members of the Angermeyer family from Germany who were among the first people to live on Santa Cruz Island. Their challenges and triumphs are chronicled in a book written by Johana Angermeyer called My Father’s Island. It provides an entertaining and enlightening perspective on the Galapagos and is a recommended read. Members of the Angermeyer family still live on Santa Cruz Island where they have a hotel and cruise company. 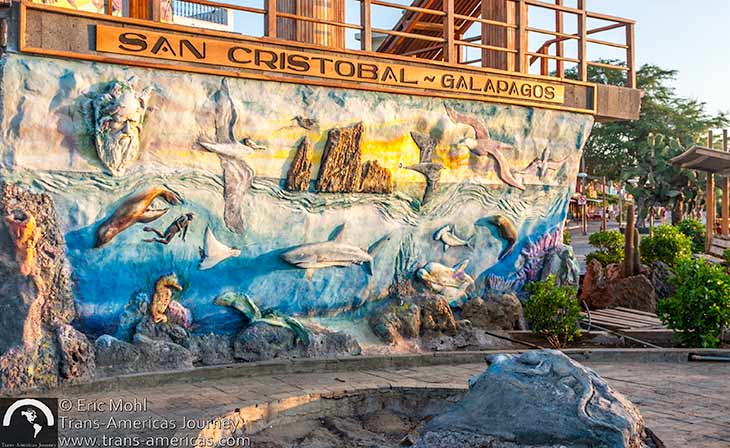 A celebration of marine life on San Cristobal Island.

In 1929, Dr. Frederick Ritter and Dore Strauch came to Floreana Island from Germany. They settled there looking to escape the ravages of WWI, but death, scandal, and mystery ensued. The saga is recounted in The Galapagos Affair: Satan Came to Eden, a 2013 documentary narrated by Cate Blanchett.

Today, tens of thousands of people live on four islands in the Galapagos. Most live on Santa Cruz Island, but there is also a substantial population on San Cristóbal Island, and a few people live on Floreana Island and on Isabella Island. 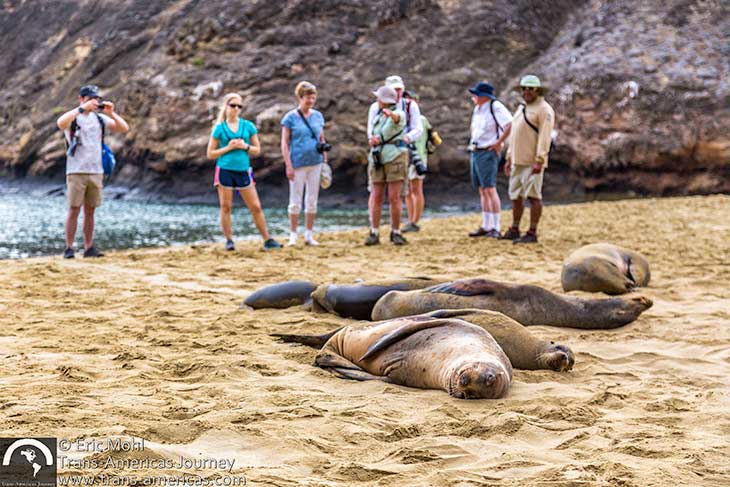 Travelers and their guides keep a healthy distance from napping sea lions.

Certified Galapagos Island guides are trained in biology, evolution, genetics, and environmental interpretation through an academy run in coordination with the Galapagos National Park and Ecuador’s Ministry of Tourism. Special preference is given to inhabitants of the Galapagos Islands and all guides must be re-certified every four years.  There are three levels of guides and the most experienced guides in the Galapagos (level 3) are nearly encyclopedic about the area’s flora, fauna, and history. It’s worth asking your tour company about the level of guide that they employ.

Animals of the Galapagos

The animals of the Galapagos Islands are the big draw for most tourists. According to officials from the Galapagos National Park, there are 2,017 endemic species (meaning species found nowhere else) in the Galapagos Islands including 79 types of fish, 42 reptiles, 45 bird species, 15 mammals, 1,435 invertebrates, 271 plants, and 130 types of seaweed. As Darwin eventually explained to the world, these species got to the islands from other places and evolved, over time, to suit their new environment perfectly thus creating unique endemic species. And it’s those species, and their enduring fearlessness about humans, that inspires so much wonder and awe. 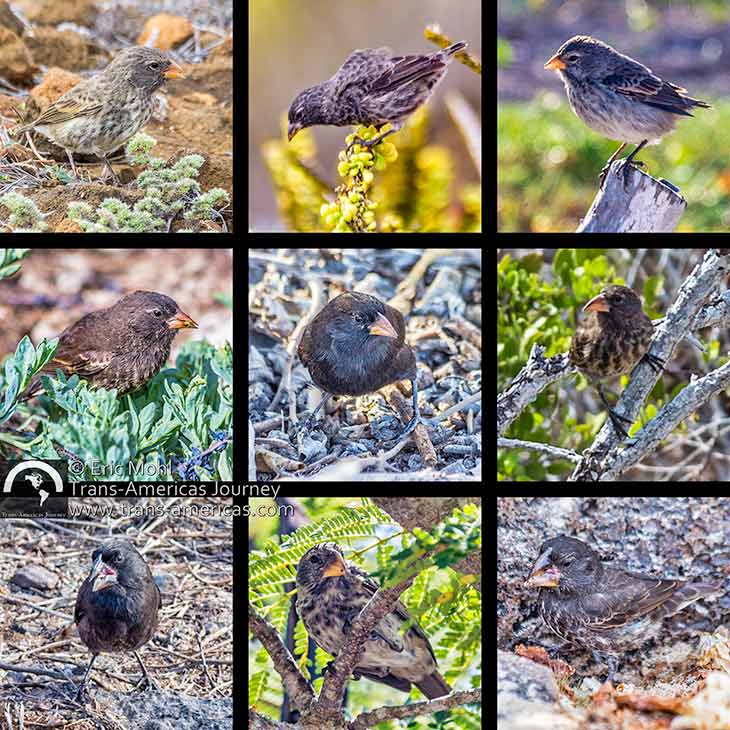 Charles Darwin noticed differences in the shape of finch beaks from island to island in the Galapagos and used that observation as part of his theory of evolution.

Darwin’s theory of evolution actually, well, evolved over many years of research. However, the heart of the theory may have come to Darwin in the Galapagos where he made observations and gathered evidence about distinct species variations from island to island that he could see in a variety of species. For example, there are 13 types of finch in the Galapagos and each species has a distinct beak structure that has evolved to allow it to eat the food available on its island. 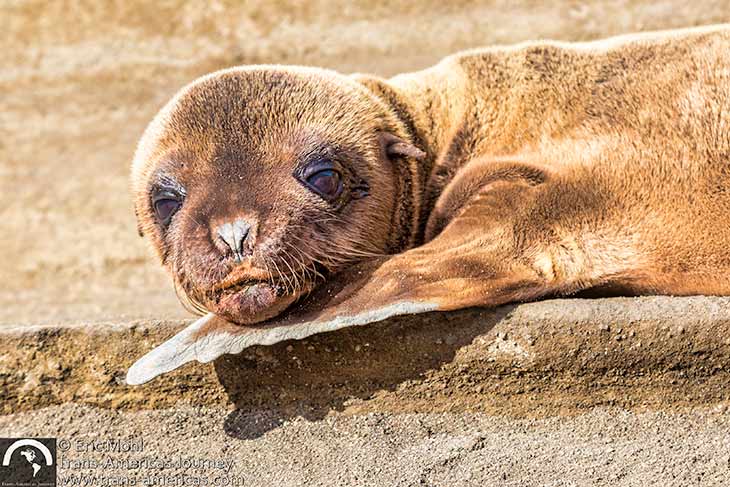 If this baby sea lion in the Galapagos doesn’t melt your heart then we can’t help you.

These animals survive on the arid, often barren volcanic islands and in the water around them which is nutrient-rich thanks to the convergence of three powerful currents: the Humboldt Current, the Panama Flow, and the Cromwell Current. Those currents are also responsible for the dry conditions on land despite the fact that the archipelago is located near the equator. 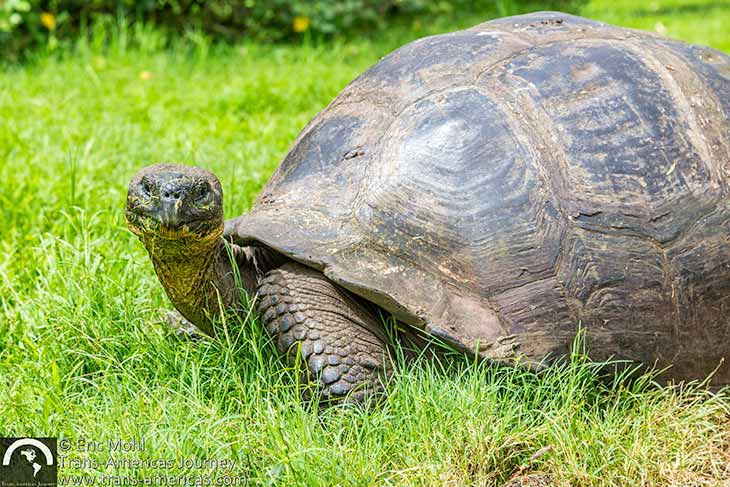 A Galapagos tortoise in its element.

The superstars of Galapagos wildlife include diving marine iguanas, tiny Galapagos penguins, elegant Galapagos albatross (aka waved albatross), Nasca boobies, blue-footed boobies, red-footed boobies, flightless cormorants, and playful sea lions. Visitors to the Galapagos will almost certainly see all of those species and many, many more up close because the isolated animals of the Galapagos have not learned to fear humans. It’s a magical experience to be in an environment that revolves around the flora and fauna, not the humans.

See more of our best shots of these species and more in our Wildlife of the Galapagos photo essay.

How to get to the Galapagos Islands

Flights to the Galapagos Islands depart from Quito or Guayaquil on mainland Ecuador. Hotel options are better in Quito and the city has a stunning colonial center that was made a UNESCO World Heritage site in 1978. Quito also offers enough museums, shopping options, and restaurants to easily fill a few days before or after your time in the Galapagos. However, Quito is located over 9,000 feet (2,700 meters), so altitude can be a problem for some travelers arriving from lower elevations. Steamy Guayaquil, Ecuador’s largest city, is at sea level, so altitude is not an issue. However, the activities, hotel, and restaurant selection is much more limited in Guayaquil. 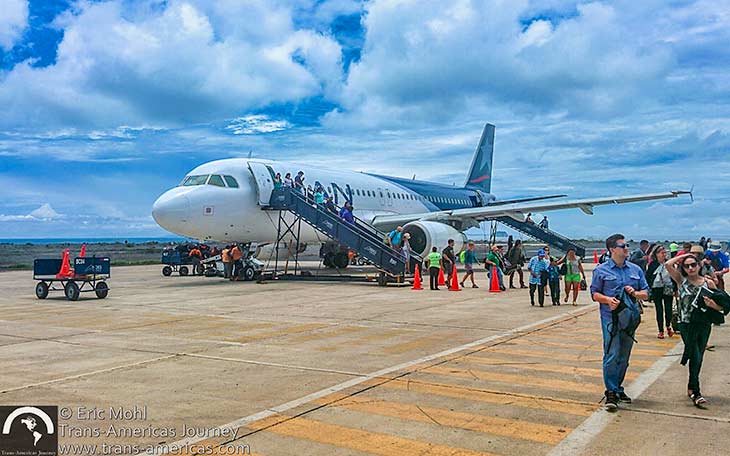 Passengers coming and going from Seymour Airport on Baltra Island in the Galapagos.

Travelers to the Galapagos Islands land at one of the two airports in the Galapagos: San Cristóbal Airport on San Cristóbal Island or Seymour Airport on Baltra which is a tiny island just off of Santa Cruz Island. Seymour Airport, which has the most flights, claims to be the world’s first green airport after a 2012 renovation incorporated recycled steel tubes, solar power, wind power, seawater desalination, and a design that keeps the building cool without air conditioning. It is not uncommon to arrive at one airport and depart from the other depending on your tour itinerary. And check with your airline about luggage weight restrictions. When we were there, luggage was limited to 44 pounds (20 kg) per person.

Fees and Rules for visiting the Galapagos

In 2012, former Ecuadorean President Rafael Correa made entry to all national parks in the country free — except for Galapagos National Park. The current park entrance fee for foreign visitors is US$100 per person, which is payable in cash upon arrival at either of the two airports in the Galapagos. There is also a US$20 tourist permit is paid at the airport in Quito or in Guayaquil. Foreign visitors and Ecuadoreans who reside on the mainland are allowed to spend a maximum of 60 days in the Galapagos in any calendar year. 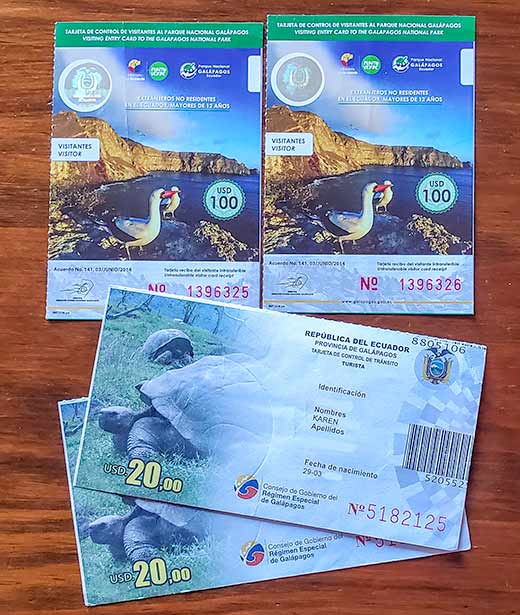 Various entry tickets that visitors to the Galapagos must purchase.

Touching or feeding any animal is strictly forbidden everywhere at all times. Travelers must stay on marked trails at all times and must stay at least six feet (two meters) away from animals at all times. Drones are not allowed at all and flash photography is also prohibited. Fishing is only permitted on boats that have been authorized by the Galapagos National Park. Additionally, motorized aquatic vehicles (like jet skis and mini-subs) are strictly prohibited.

Be careful when purchasing souvenirs. It’s illegal to buy anything made with banned substances including black coral, shells, lava rock, animal parts, or any native wood or plant. And don’t take shells or any other natural element off the islands. 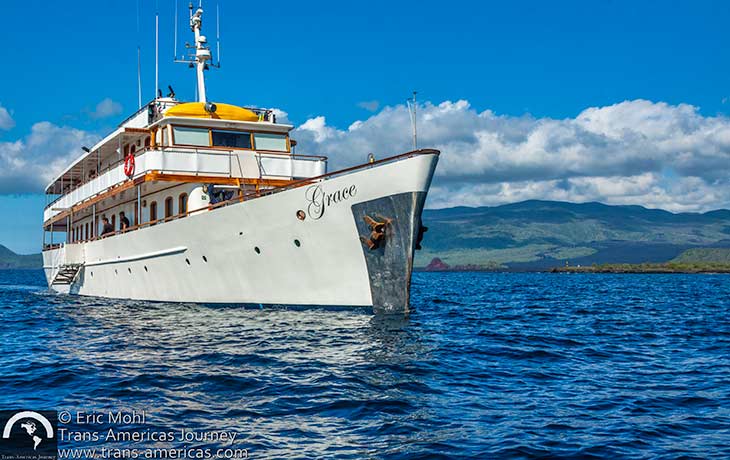 The M/Y Grace, operated by Quasar Expeditions, is just one of about 100 vessels that are allowed to offer services to tourists in the Galapagos.

The Galapagos National Park creates, regulates, and oversees cruise vessel itineraries to help control crowd size and reduce human impact on the fragile island and marine environments. Guests on liveaboard Galapagos Island cruises must make their land excursions in groups of 16 people or less, and there must be one naturalist guide per 16 passengers. You are not allowed to smoke or bring any type of food with you during land excursions.

The introduction of non-native plant species is considered a top environmental threat to the Galapagos Islands, so do not bring in any fruits, vegetables, or plants of any kind. Anything that might have seeds or spores clinging to it, such as the soles of your shoes and any outdoor gear or camping equipment, should be washed and inspected thoroughly before being brought to the islands. The threat of invasive plant species is so great that visitors arriving to the Galápagos have to sign an affidavit swearing that they’re not bringing in any food, animals, seeds, or dirty camping gear.

And remember that the time in the Galapagos Islands is one hour ahead of the time mainland Ecuador. 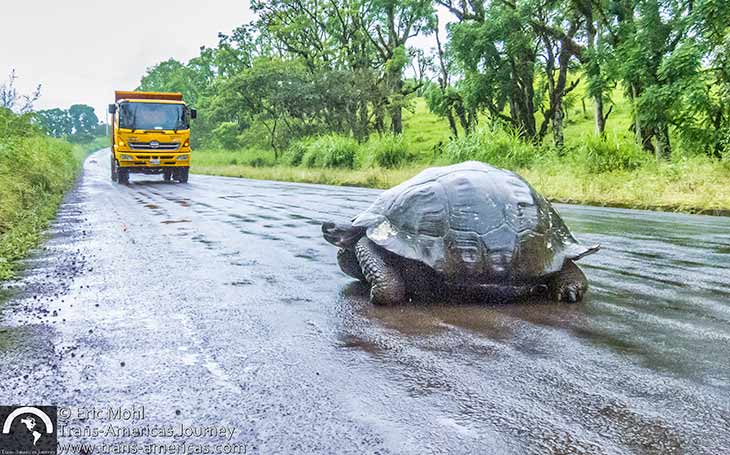 The animals always have the right of way in the Galapagos. This tortoise was the first wild animal we saw in the Galapagos as it crossed the road in front of our taxi shortly after we arrived.