The Huacas de Moche Archaeological Complex in northern Peru includes Huaca de la Luna and Huaca del Sol archaeological sites where visitors get a glimpse of the once-thriving capital of the Moche culture including a diety called the Decapitator God and a spot that was probably used for human sacrifices. 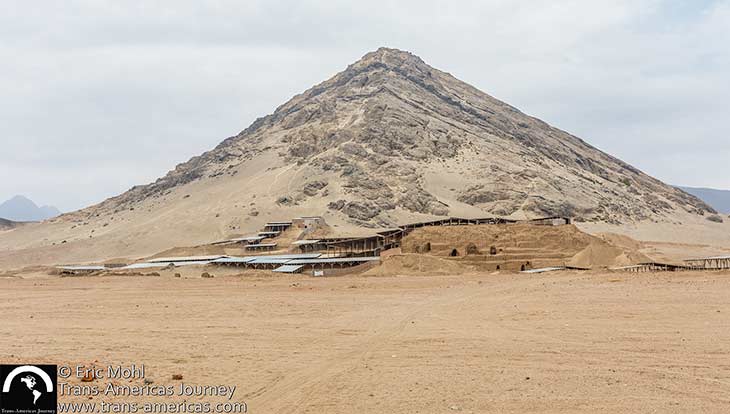 Huaca de la Luna at the foot of Cerro Blanco at the Huacas de Moche Archaeological Complex in Peru.

The Huacas de Moche Archaeological Complex (5 soles or about US$1.30 to enter the site and 10 soles or about US$2.60 to enter the Santiago Uceda Castillo Museum, previously called Museo Huacas de Moche) is located about 6 miles (10 km) from the city of Trujillo and includes what remains of what served as the capital of the Moche civilization from the 1st century BC to the 9th century AD. 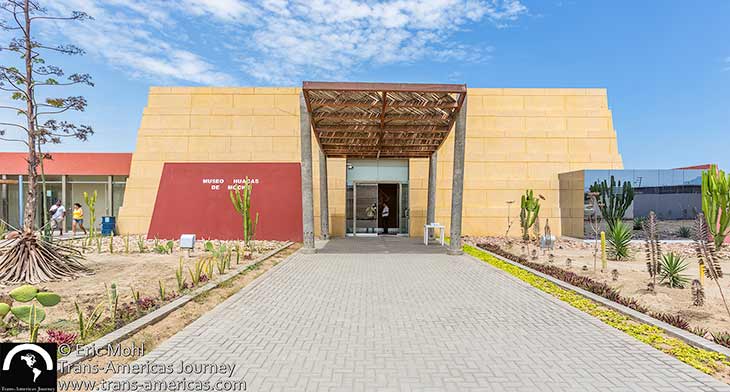 The museum entrance at the Huacas de Moche Archaeological Complex.

The complex includes the Huaca del Sol area and the Huaca de la Luna area with a large expanse in between where tens of thousands of people once lived. The word huaca was used by pre-Incan civilizations to mean a monument that represents something revered. In areas outside of the Andes, huacas are often pyramid-type structures that were built up and enlarged over the years. Today, these huacas typically look like a natural mound or small hill until they are excavated. 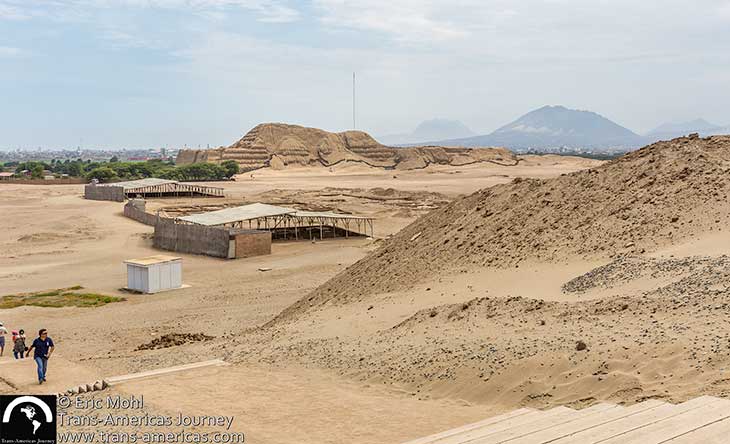 Visitors to the Huacas de Moche Archaeological Complex must join a 1-hour guided group tour (maximum of 25 people and groups depart with at least 10 minutes between them). There is no formal charge for the guide (Spanish only), but tips are encouraged. 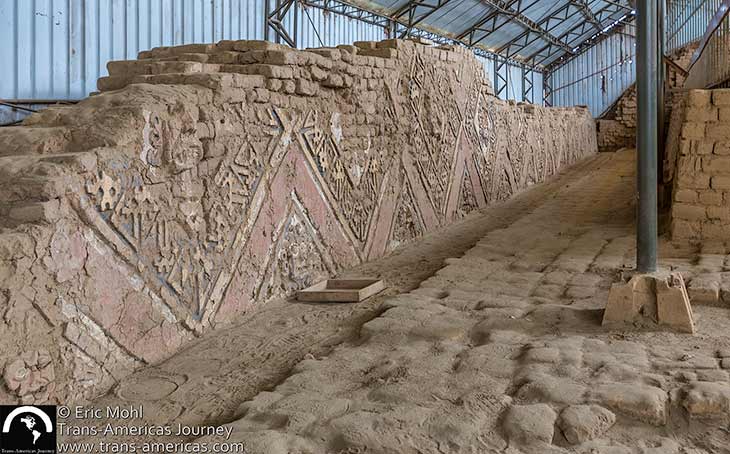 A decorated wall at the Huacas de Moche Archaeological Complex.

Huaca del Sol, which experts believe was where political and administrative activities took place, is not open to visitors. In 2011, archaeologists began studying Huaca del Sol which was constructed using an estimated 140 million adobe bricks. 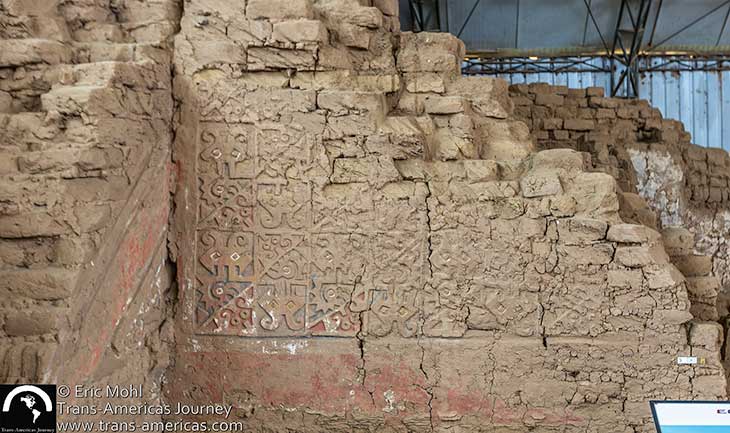 You can see how fragile some of the ancient decorated walls are.

Huaca del Sol is still being explored by archaeologists, including its 140 foot (43 meter) high pyramid which was badly damaged when Spanish conquistadors diverted the Moche River so that it ran past the base of structures in this area–a move that may have been intended to make it easier to get into the structures in order to loot them. 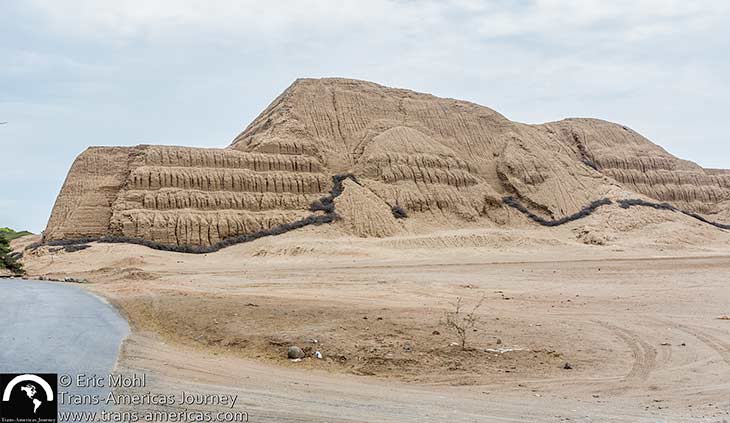 Huaca del Sol seems to be melting in the coastal desert of Peru.

Huaca de la Luna, about 0.3 miles (0.5 km) from Huaca del Sol, is open to visitors and that’s where the guided tours take place. 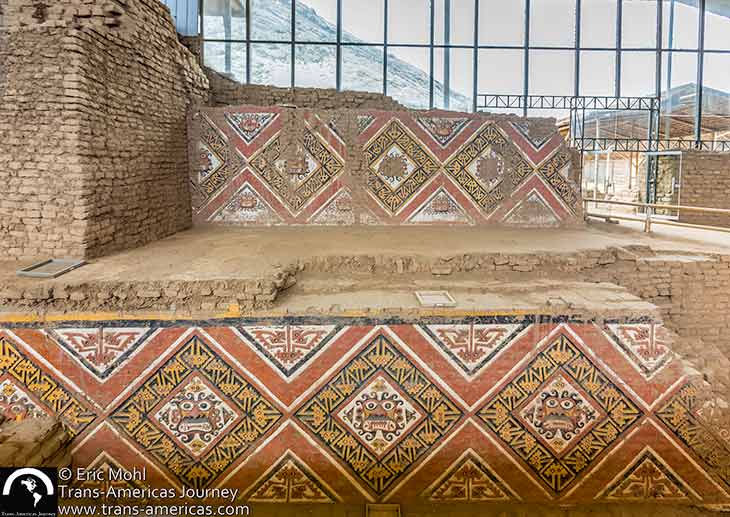 In this shot, you can see the vibrant protected art from a lower level of construction which would have been covered in adobe bricks and protected when the upper level, with its damaged exposed wall, was built on top of it.

This area dates back more than 1,500 years and has been studied since the 1990s. Experts believe Huaca de la Luna was the religious center of the Moche capital and temples have been discovered here that were built layer upon layer during at least six different constructions over a 600-year span. 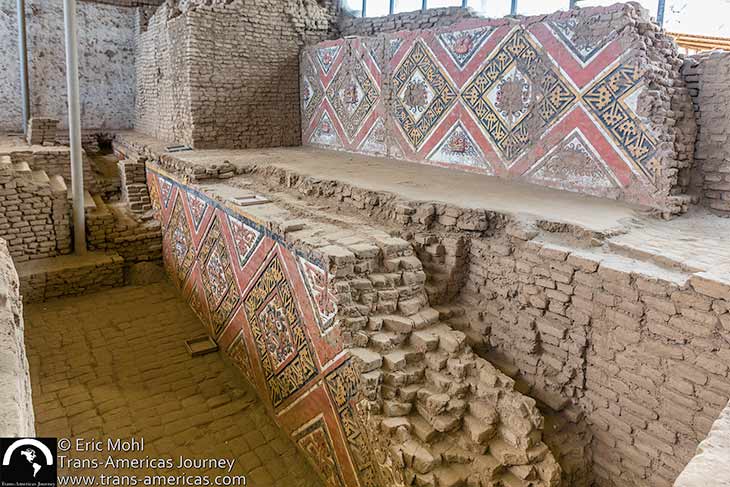 In this shot, you can see how the lower level of this stepped structure was filled in with adobe bricks when the upper level was built on top of it.

To construct each new level, the previous level had to be filled in and covered in adobe bricks to create large stepped pyramids. This process covered up the grandeur and design of the previous level and this provided very effective protection which is why we can still see so much colorful design work. 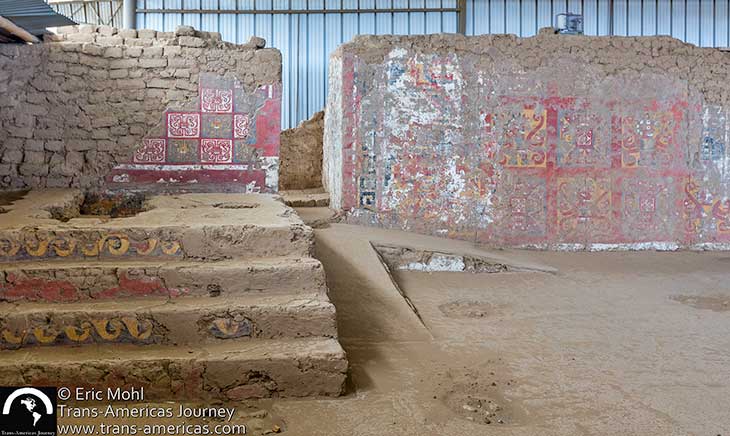 There’s also a ceremonial altar where human remains were found, leading experts to believe that human sacrifices were made there possibly in reverence for Ai Apaec (aka the Decaptitaor God) which is depicted with fangs and spider-like limbs, one of which is usually holding a severed head. 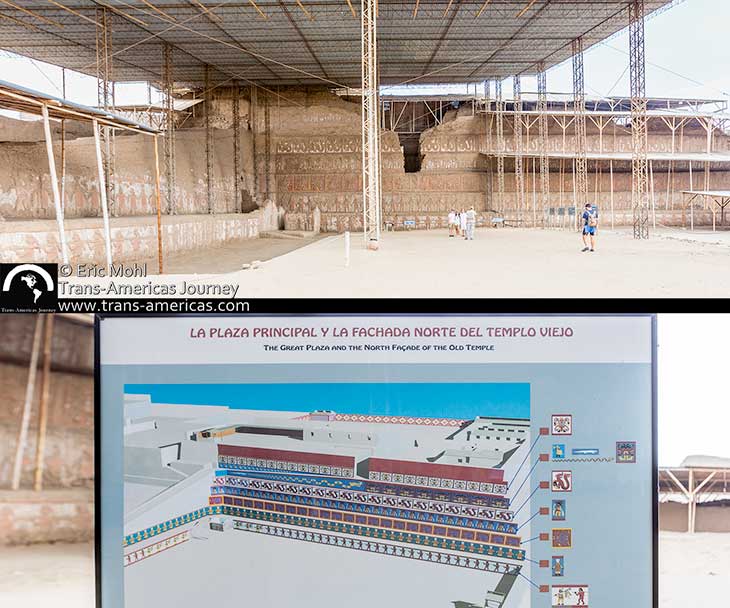 There are many depictions of the Decapitator God around the Huaca de la Luna area, which was built on the lower flanks of the Cerro Blanco volcano. Many of these depictions and other friezes are still full of the black, yellow, white, red, and blue mineral-based pigments that the Moche used. 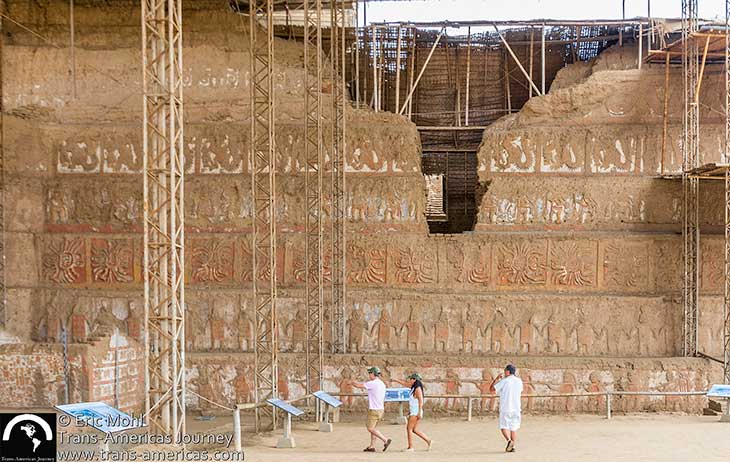 Visitors touring the Principal Plaza to see its terrace walls covered in friezes. 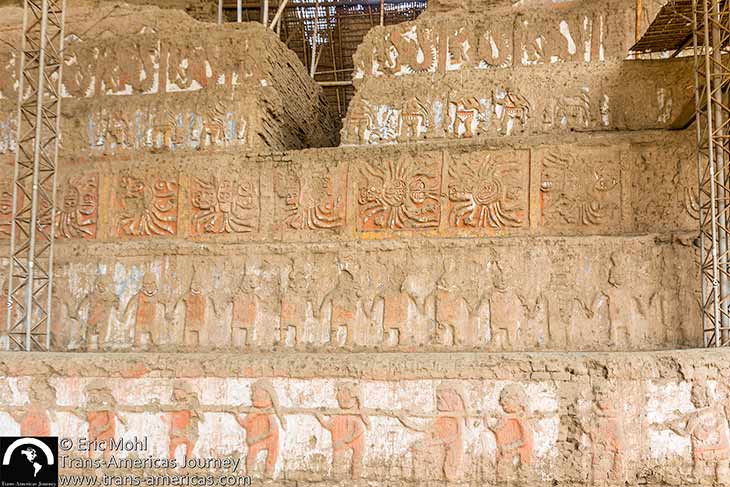 Friezes on the North Face of Huaca de la Luna including (bottom to top) prisoners, priests, spiders, the Fisher God, a half feline/half reptile creature, warriors, and the Decapitator God. 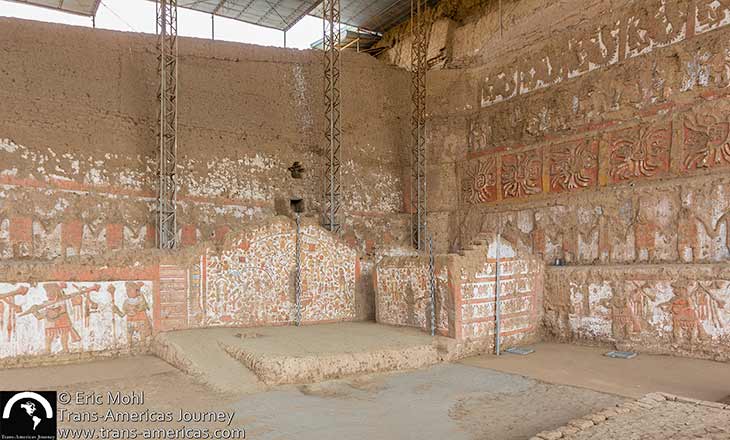 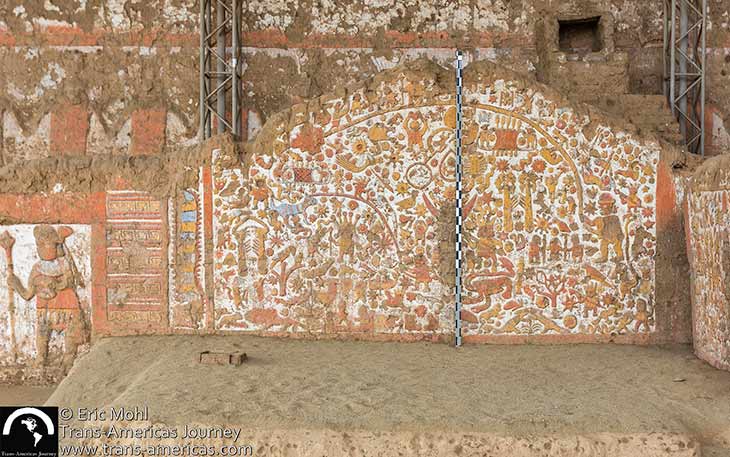 This panel is called Mural of the Myths. 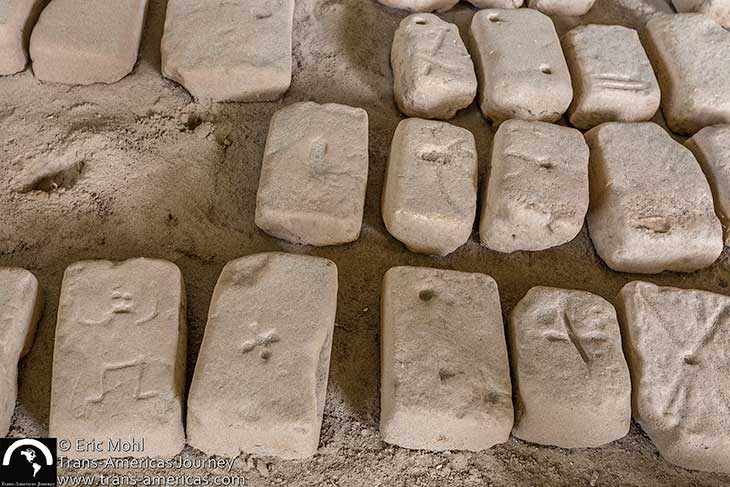 These bricks, used to construct the buildings and walls at the Huacas de Moche Archaeological Complex, are each marked with the symbol of the person who made them.