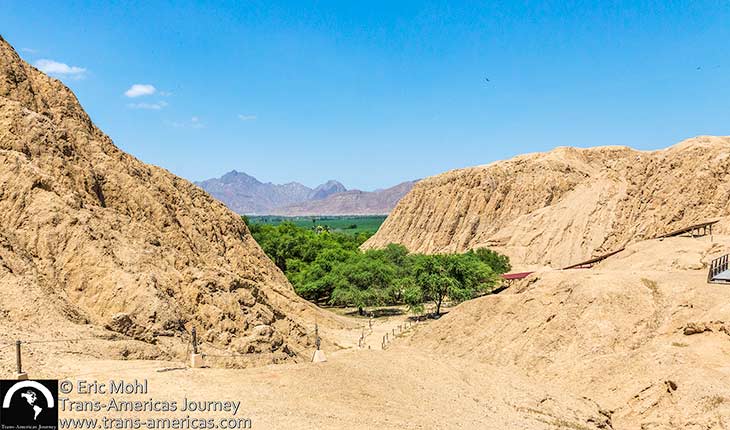 What look like slowly-eroding hills are actually archaeological structures being unearthed at the Huaca Rajada site near Chiclayo, Peru.

The word huaca was used by pre-Incan civilizations to mean a monument that represents something revered. In areas outside of the Andes, huacas are often pyramid-type structures that were built up and enlarged over the years. Today, these huacas typically look like just another natural mound or small hill until they’re excavated.

This dusty, sunny site near the town of Sipán is a good example of a huaca from the Moche culture which existed between 100 and 700 AD. Built in a pyramid form, experts believe that the adobe structures at the pre-Incan Huaca Rajada Archaeological Complex (8 soles or about US$2.15 entry) were the last resting places of Moche leaders. 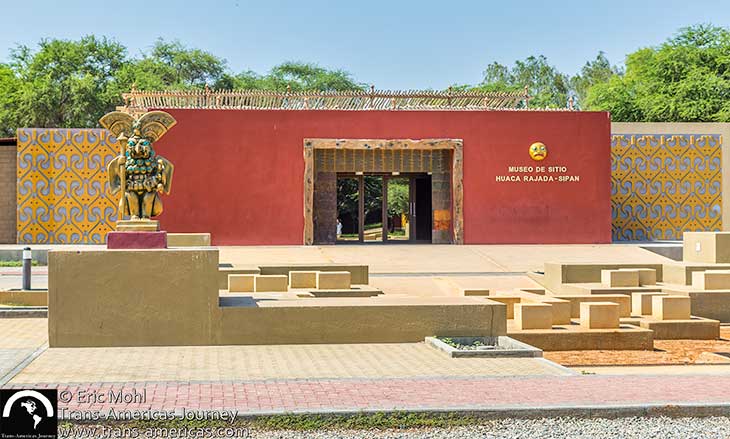 The museum at the Huaca Rajada archaeological site.

First excavated in 1987 after local police were tipped off about looters at the site, Huaca Rajada (about a 40-minute drive from the city of Chiclayo) has so far yielded more than a dozen tombs. The inhabitant of the first intact tomb that the experts found became known as the Lord of Sipán. 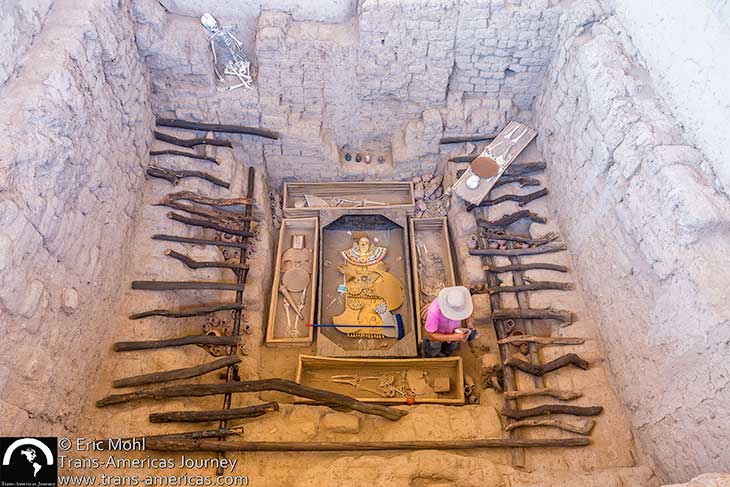 An archaeologist works in a tomb at the Huaca Rajada archaeological site that shows a reconstruction of the tomb of the so-called Lord of Sipan.

His tomb has been carbon-dated back to 300 AD and it housed the mummified remains of a man believed to be a high-ranking Moche because of the resplendent paraphernalia he was buried with including gold and silver objects. In Moche style, he was also buried with six other humans and some animals. 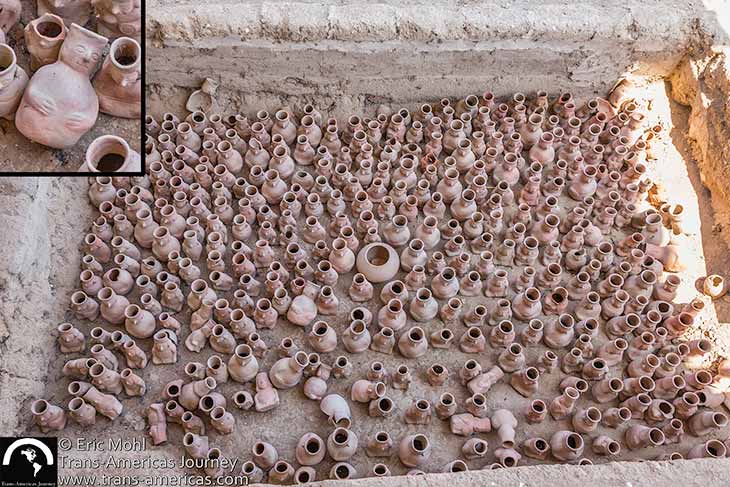 The Moche people exhibited terrific pottery skills and this display of clay pots at the Huaca Rajada archaeological site shows just a few of the pieces found there.

The weather-battered and eroded structures at Huaca Rajada contained many burial sites which were largely looted before archaeologists protected the area. Visitors can walk a short dirt trail up and around part of an eroded mound. You can also see excavated tombs protected under a shelter to keep weather damage to a minimum. 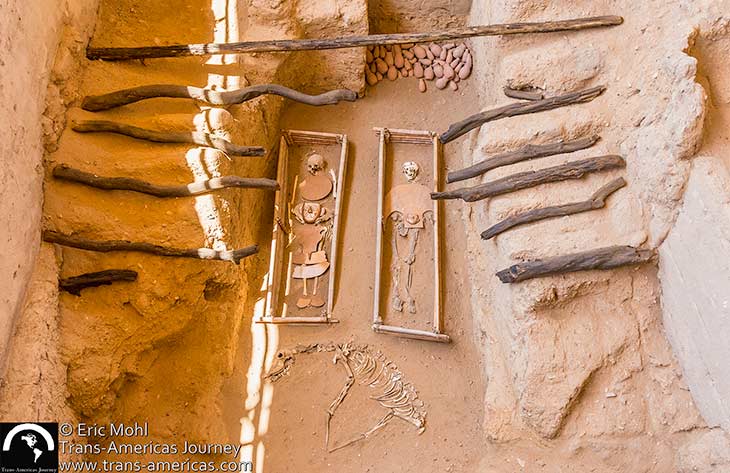 Another royal tomb at the Huaca Rajada archaeological site. Don’t miss the bones of a llama below the human skeletons.

New tombs are still being found at the Huaca Rajada Archaeological Complex and the site is still an active dig. Many of the signs at this site are in English and Spanish. Allow 40 minutes to tour the site itself, but it’s also worth popping into the small museum at the Huaca Rajada Archaeological Complex to see intricate pottery that the Moche were famous for. 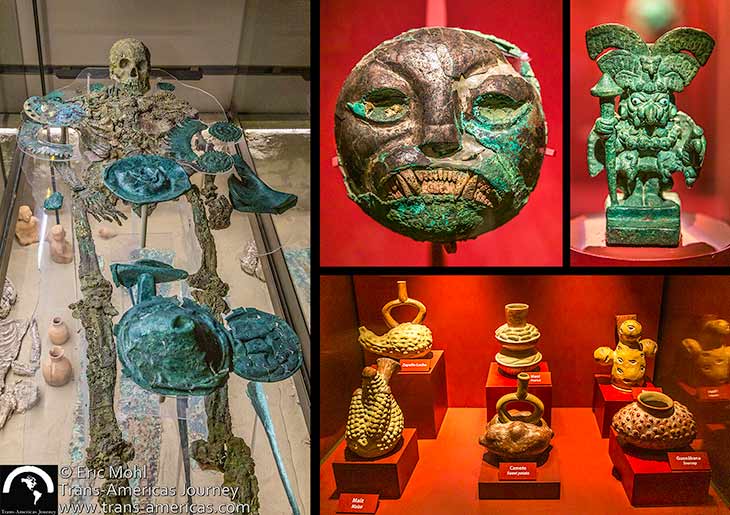 Artifacts of the Moche culture on display in the small but satisfying onsite museum at the Huaca Rajada archaeological site.

Impressive pieces of pottery included some created with detailed and realistic depictions of fruit and even human faces. Many pieces are also remarkably intact. There’s a replica of the tomb of the Lord of Sipán at the Huaca Rajada archaeological site, but the original artifacts found in that tomb are in the Royal Tombs of Sipán Museum in Lambayeque. We recommend that you stop there and check out the originals before visiting this archaeological site.

During your visit to Huaca Rajada, also look for small ground owls. They were an important symbol for the Moche people and many still live at the site.

Pyramids and purgatory at the Túcume archaeological site

No lords have yet been unearthed at the Túcume archaeological site (12 soles or about US$3.25 entry), but this site is impressive for its sheer size. Sometimes called the Pyramids of Túcume, archaeologists have discovered 26 adobe brick pyramids here which were originally created by the Lambayeque people, sometimes called the Sican people, around 1,00 AD in the early-to-mid-period of their culture.

An overview of the vast Túcume archaeological site.

The structures at Túcume cover 540 acres (221 hectares) and the main attractions of the site, which is about an hour by car from Chiclayo, include Huaca del Pueblo, Huaca las Balsas, and Huaca Larga which is 2,296 feet (700 meters) long and the largest structure at the site.

Most structures have been heavily eroded by wind and rain, including an El Nino-triggered flood in 2017, so they may not look like much to the untrained eye. A dirt trail takes visitors through parts of the site, including a spot on Purgatory Mountain, aka Cerro de la Raya, with views down onto the impressively large site.

We were told this mountain got its name because there used to be a lake on top that had rays living in it, hence Cerro de la Raya (Stingray Mountain). Some also say that Spanish conquistadors once dressed as demons and brought members of indigenous communities to the top of this mountain where they tried to convert them to Christianity. Those who refused were allegedly thrown off the mountain to their deaths (hence Purgatory Mountain). To this day this hill is considered sacred by indigenous groups and some locals won’t go near it. 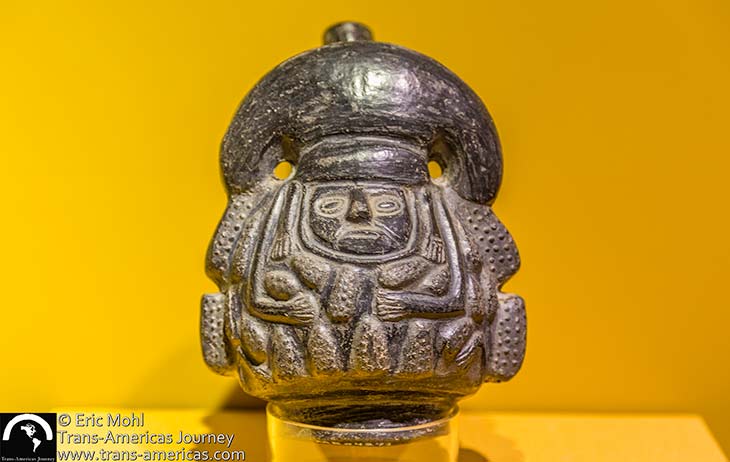 An artifact unearthed at the Túcume archaeological site on display in the onsite museum.

In 1988, Norwegian explorer Thor Heyerdahl spent time excavating the Túcume site where decorative motifs similar to those he’d seen on Easter Island renewed his theory that “the earliest inhabitants of Easter Island must have sailed from South American beaches”. 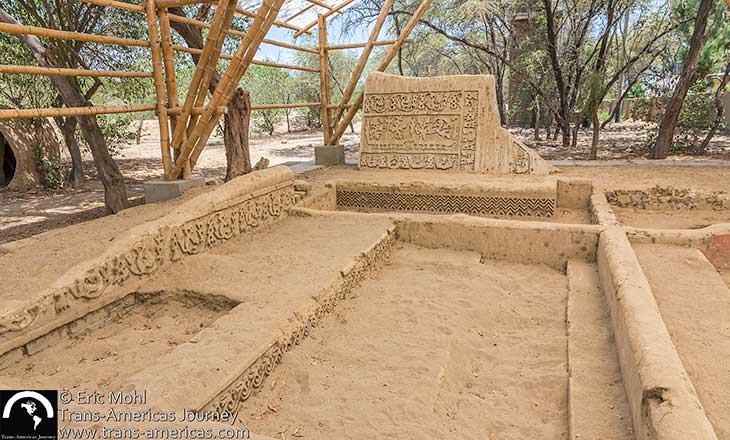 There’s a 3 room museum at this site with many signs and explanations in English as well as Spanish. And if you want to linger in the area longer, check out Los Horcones de Tucume Rural Lodge, a 12-room country chic hotel with a pool right on the edge of this archaeological site.

We’ve visited well over 100 archaeological sites in the course of our Trans-Americas Journey but, so far, we’ve only ridden horses to one of them. 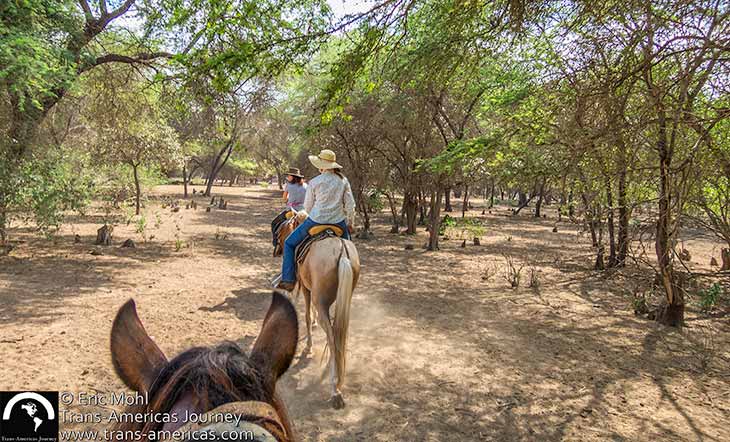 Heading out to an archaeological site on Peruvian Paso horses with Rancho Santana.

Travelers looking for an unusual way to visit an archaeological site and a chance to ride a Peruvian Paso horse should head to Rancho Santana in the village of Pacora about a 40-minute drive from Chiclayo.

This operation has a small stable of Peruvian Paso horses that the Swiss and Peruvian owners have bred themselves over the years. They offer short rides to a nearby archaeological site or multi-day rides that include other sites in the region (S/55, about US$17, for a three-hour ride to one site; S/75, about US$23, for a five-hour ride to three sites, or multi-day rides). 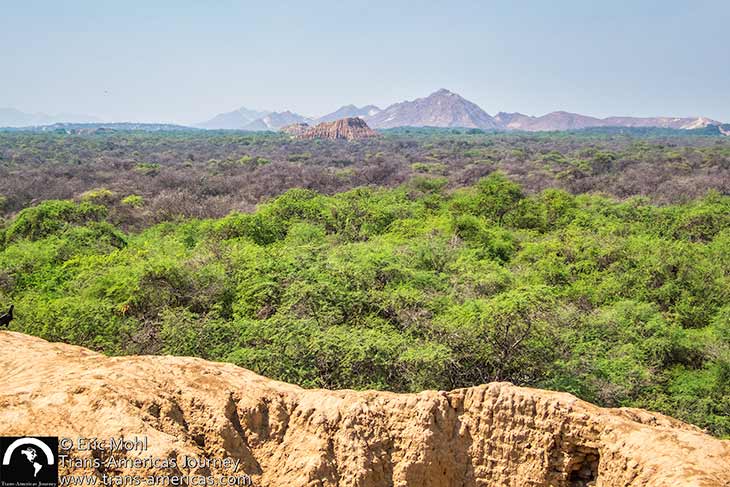 A climb to the top of the Santillo archaeological site delivers a view of the scrub forest around it and Huaca Jotoro in the distance.

We booked the 3-hour ride to the Huaca Santillo (sometimes spelled Sontillo) site and our extremely smooth-gated mounts took us through the Pómac Forest Historical Sanctuary, an enormous protected dry forest, via a private entrance that the owners of Rancho Santana have special permission to use. It was hot and dry but the scenery was great and it was fun to experience the unique natural gait of these horses. When horse and rider click it’s like riding a moving sofa. 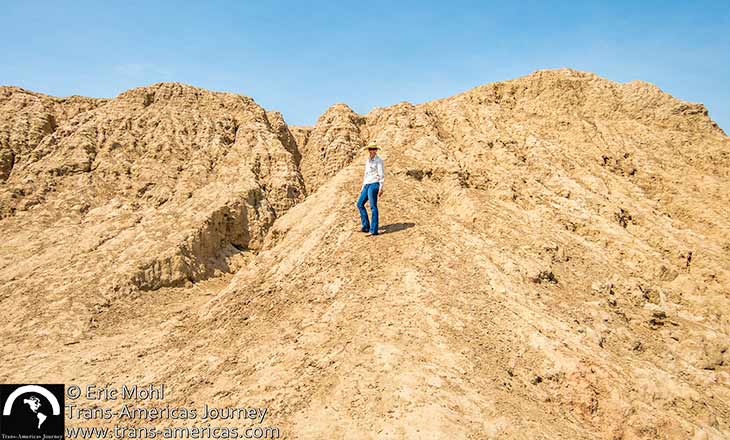 Karen climbing up the side of the Huaca Santillo archaeological site as part of our horseback ride with Rancho Santana.

When we reached the Santillo archaeological site, we tied up the horses and scrambled to the top of a badly eroded structure where we could easily see bits of pottery in the dirt. This site is only minimally excavated and artifacts found here include two copper knives, but there is still much to discover.

After our ride, we spent a peaceful night in Rancho Santana’s simple adobe bungalow with concrete floors, private bathroom, double bed and bunks, and come-and-go Wi-Fi (35 soles or about US$9 per person per night including breakfast).