Sand and surf may not be the first things you think of when you think of Oaxaca State in southern Mexico. This region more commonly conjures up visions of exquisite food, the Monte Alban Mayan ruins, uber-Mexican handicrafts, mezcal, more exquisite food, and an awesome annual Dia del Muertos celebration. But beaches they got–and each one with its own personality. Here’s our beach town travel guide to Oaxaca beaches including Bahias de Huatulco, Mazunte, and Puerto Escondido. 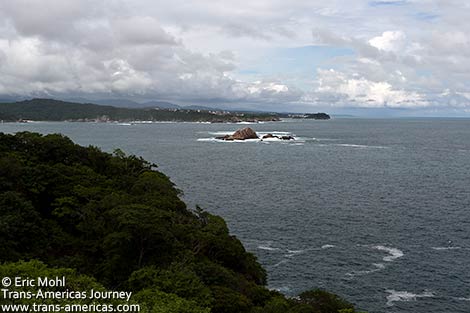 The Bahias de Huatulco coastline in Oaxaca State in Mexico.

The first sandy-feet stop we made in Oaxaca State was a stretch of bays called Bahias de Huatulco. Developed by Fontur (the often heavy-handed tourism development branch of the Mexican government which created Cancun), Bahias has wide grand boulevards, gated condo developments, and hotels with lofty names. What it doesn’t have are tourists.

By most accounts, the untold millions of pesos the government invested in the infrastructure of Bahias de Huatulco and the promotion of that infrastructure has largely flopped. Sure, Mexican vacationers looking for a cheap beach hang come to the Bahias but very few foreign tourists have been attracted to the place. 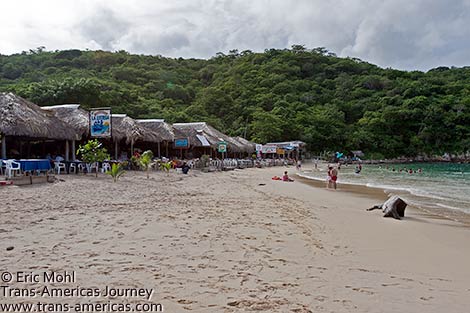 We were looking for a cheap beach hang, so we parked it in a small town called La Crucecita, a low-key town just inland from the string of bays and beaches. Apart from the usual flip-flop shops, bakeries, and taco stands La Crucecita has one other noteworthy feature: The Parroquia de Nuestra Senora de Guadalupe church on the main plaza which is home to an enormous image of the Virgen of Guadalupe painted on the ceiling.

Though the bays are technically part of a coastal park system we were never asked to pay an entrance fee when we visited Playa la Entrega. La Entrega means the delivery in Spanish, which makes a lot more sense when you learn that in 1831 Mexican independence hero Vicente Guerrero was handed over to his enemies at Playa la Entrega. Guerrero was then taken to Cuilapan near the city of Oaxaca where he was executed. 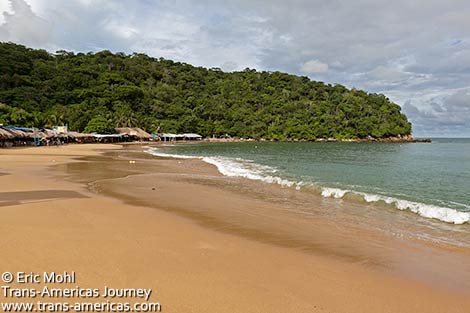 This lovely crescent of sand is found at Bahia Magay.

The only people being dragged ashore when we were at Playa la Entrega enjoying 100 peso (about US$8) plates of fresh grilled fish and cold beer were the wayward children of the many Mexican families who were enjoying the beach too.

Later that afternoon we drove further out to Bahia Magay which was an even lovelier crescent of sand than Playa la Entrega (but still no park entry fee). Weirdly, Bahia Magay was nearly deserted and more than half of the palapa restaurants weren’t even open.

A half day’s drive northward got us to the world (in)famous beach town of Zipolite which was deserted in a depressing, down-trodden kind of way which trampled all over our very fond memories of the laid-back vibe of this beach town when we visited it on a previous trip to Mexico about 10 years ago.

At that time Zipolite was an idyllic combination of happy hippies, cheap everything, and a kind of organic sense of community aptly demonstrated when the thatch roof of one of the beach restaurants caught fire and all the travelers formed a bucket brigade to the sea until the flames were out.

But things in Zipolite had clearly changed, and so did our plans. 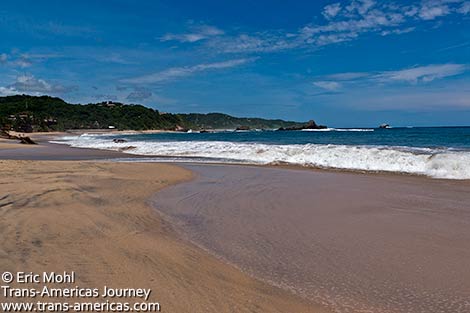 Playa Rinconcito in the chillaxed beach town of Mazunte.

We were glad we decided to ditch Zipolite because the next beach town to the north is Mazunte where the vibe was lively yet chillaxed without being decrepit. At Mazunte, a lone (terribly weather-worn) road juts off the highway and dead ends at Playa Rinconcito–Mazunte’s petite and sheltered arc of sand.

There, clinging to a craggy rocky outcrop is an eclectic collection of accommodations called Posada del Arquitecto. Created by an Italian architect, the rambling place has accommodations which run the gamut from hammock hooks under a tin roof (with the best views in the house) to a bare-bones dorm to one of the most romantic rooms (in a Robinson Crusoe kind of a way) that we’ve ever stayed in (it’s called Cactus). 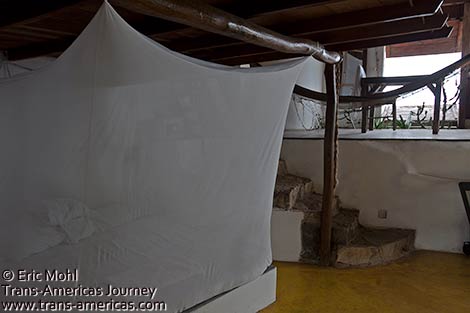 Inside the Cactus duplex hideaway at Posada del Arquitecto in Mazunte.

We were guests in the Cactus room which is where the owner used to live. The multi-level thatch-roofed open-air bungalow is perched on a cactus-covered rocky outcrop a couple dozen feet above the Pacific Ocean which crashes dramatically (some guests even complain about the noise but we loved it).

It is rustic romance personified with a private entrance and peep-free location that encourages traipsing around half-naked, a hammock made for two, a petite kitchen (just big enough to chill some beer, whip up a guacamole snack or pasta dinner and brew morning coffee) plus the sound and sight of those waves 24/7. 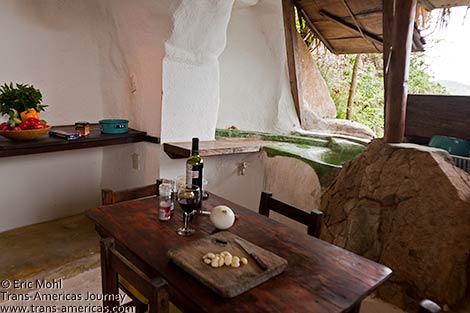 Dinner for two in progress in the petite kitchen in the Cactus duplex room at Posada del Arquitecto in Mazunte.

The whole duplex opens up thanks to wooden panels rigged up to ropes and pulleys and the toilet faces a window with a million dollar sea view (the perfect place to watch the locals boogie board). There’s free Wi-Fi and you get a full frontal view of Punto Cometa, the southernmost point in the state, from almost every window. 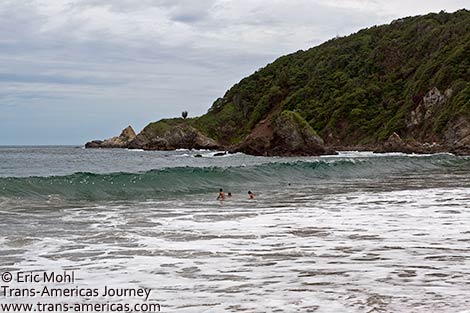 The sheltered arc of Playa Rinconcito in Mazunte.

Mazunte, which once supplied the turtle meat market until turtle hunting was banned in the 1990s, is now home to the Centro Mexicana de la Tortuga turtle center where a collection of tanks lets you get THIS CLOSE to a vast array of turtle types. 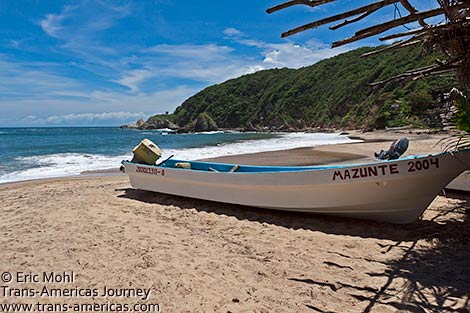 This is about as crowded as Playa Rinconcito in Mazunte got while we were there.

We capped off our Oaxaca beach tour with lunch in Puerto Escondido where we munched on more fresh fish and watched the area’s famous surf break right in front of us. Unlike Zipolite, we were pleased with the changes we saw in Puerto Escondido since our last visit. Yes, it’s bigger and more built up. However, it retains a pleasant beach bum feeling and there is still a range of restaurants and hotels in all price (and style) ranges. 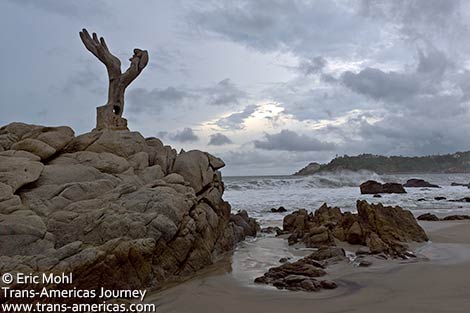 A dramatic free-form sculpture of a pair of hands stands watch in Puerto Escondido.

Glad we had
Though we never felt like we were really in danger of having our things stolen, whenever we left the unlockable duplex we played it safe by securing our computers, cameras and other valuables in our Pacsafe exomesh bag protectors. We just put everything into the un-cuttable metal mesh bag, secured the top, locked it closed, then latched the whole bundle to the post of the staircase. Instant peace of mind.