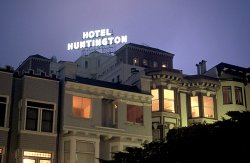 I’ve visited San Francisco dozens of times but I’ve never had a room in the Nob Hill area. So it’s fitting that my first stay in that swanky part of town should be at the Huntington Hotel & Nob Hill Spa (now called the Scarlet Huntington Hotel). Opened in 1924 as hotel apartments and converted into a traditional hotel in 1947, The Huntington was the first steel and brick high rise west of the Mississippi.

The staff combine friendly smiles with formal dignity and remembered my name throughout my stay. Coffee or tea upon check in is a very welcoming touch as well. Guests are provided with complimentary chauffeur service to city’s financial district and Union Square and enjoy free access to hotel’s beautiful Nob Hill Spa, including the indoor infinity-edge pool, Jacuzzi, saunas and steam rooms as well as instructor-led yoga and Pilates classes.

When I called room service to request two additional wine glasses in my room I was astutely asked whether I wanted red wine glasses or white wine glasses. The Huntington is even about to one-up the turn-down service by placing individually wrapped Babor Sensational Eyes moisturizing and cooling eye pads on your pillow every night. 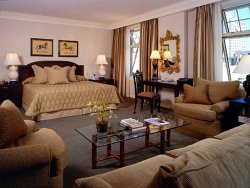 A wonderful hold-over from the building’s days as hotel apartments is the abundance of windows (even in the bathrooms) and the fact that every single one of them can be opened. The rooms are also extraordinarily large. Even the superior rooms—the most basic of the hotel’s 96 rooms and 40 suites—are around 400 square feet.

Whatever room category you choose, try to book accommodation on the eighth through twelfth floors for the best views of Huntington Park and Grace Cathedral across the street on one side of the hotel, or the downtown skyline on the other. I stayed in a City View Suite on the 11th floor and the view of the sky, weather and unique lines and curves of  city of San Francisco were breathtakingly memorable.

The same could be said for the huge antique tapestry that was hung on one wall of my suite and the opulent use of  black and white marble in the bathroom which also featured a double-head shower. Sadly, a certain Academy Award-nominated actor’s  entourage was less impressed and recently chose not to book the actor into my very same suite. Something about the softly pink walls….

But the family-owned Huntington Hotel (its sister property is the La Playa Hotel in Carmel, CA) is not so rooted in the past that it can’t innovate. Case in point: room 504. Following increasing demand from guests for a more private way to indulge in the mind-boggling array of treatments at the hotel’s Nob Hill Spa (the menu is 20 pages long), The Huntington decided to renovate room 504, replacing the bedroom furniture with massage tables and recently installing pedicure chairs. This Premiere Spa Suite is now available in four hour blocks with or without in-room catering.

Off the recently renovated lobby—which bypasses stuffy and heads straight for airy, welcoming and elegant—is the hotel’s boutique which offers an unusually diverse and elegant range of merchandise including White and Warren cashmere that will have you praying for the city’s legendary fog to roll in, Yogi workout clothes for those free yoga and Pilates classes, plus stunning jewelry  and beautifully packaged European beauty products in addition to the line that’s made exclusively for the Nob Hill Spa.

More shopping awaits in Union Square where an enormous new Bloomingdale’s —the second largest next to the New York City flagship—opened in late 2006, and an mposing new Barney’s is currently under construction. Add those two retail luminaries to the already world-class selection of stores in the area (Chanel to Victoria’s Secret to Pottery Barn) and you’ve got your work cut out for you. Yes, it’s a steep journey back up Nob Hill when it’s time to return to The Huntington, but that’s the only way to get to the top.