Sure we’re careful. But we’ve also been lucky. After many, many years of traveling on the road we’ve only been robbed once when some  *#!!*&^  stole the side-view mirrors off our truck in Guadalajara, Mexico. That lucky streak came to a screeching halt on the shores of the beautiful crater lake in the Ipala Volcano in Guatemala. 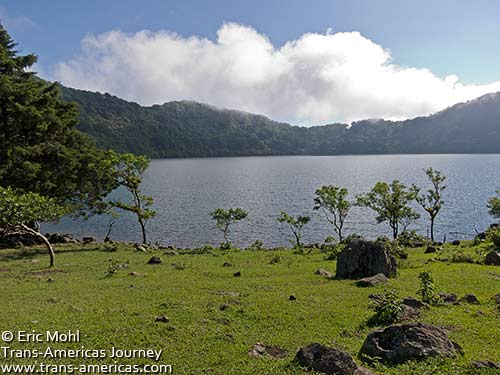 Lovely Ipala Lake in the crater of the dormant Ipala Volcano in Guatemala.

It all started when we decided to go camping with our friend George (perhaps the coolest guy in Guatemala) on the shores of Ipala Lake in the dormant crater of Ipala Volcano.

Ipala Volcano is more than 5,400 feet (1,650 meters) high which is pretty dramatic. But what makes this dormant volcano really special is the lake that’s formed in its crater. Ipala Lake sits at 4,898 feet (1,493 meters) and is more than half a mile (1 kilometer) in circumference. It’s also pretty nice to look at.

You can hike up to the lake along a scenic trail (about two hours) but if you’ve got a high-clearance vehicle you can drive to Ipala Lake as well. Emphasis on the high-clearance part. The road up from the town of Agua Blanca is steep, rutted and rocky. Forget it if it’s been raining.

The slow, rough drive behind us, we were rewarded with a stunning lakeside camping area with flat, grassy sections for tents, four picnic tables under sturdy shelters with adjacent makeshift bbq grills, a relatively clean row of toilets and no other neighbors save for day trippers (locals and tourists) and some random horses and cows who wandered down to the lake to drink (something you should not do). All for 10Q (US$1.25) per person. A local woman even sold us some firewood and homemade tortillas.

The bright blue, nearly perfectly-round Ipala Lake is part of Guatemala’s Consejo Nacional de Areas Protegidas (National Council of Protected Areas) or CONAP for short. This organization protects more than 150 location in Guatemala by keeping poachers and polluters out and ensuring that many of the areas remain open for recreational and tourist use. 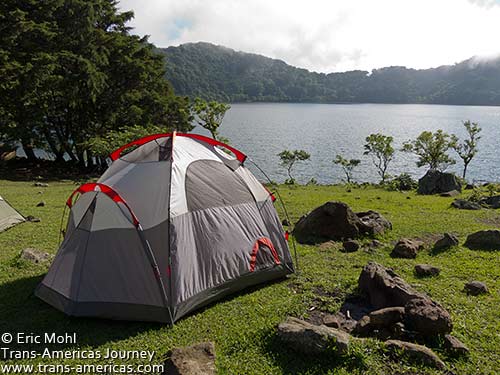 Our tent on the shores of Ipala Lake in the crater of the dormant Ipala Volcano in Guatemala.

The lake did look inviting, but at nearly 5,000 feet (1,524 meters) it was a bit chilly for a swim. Instead, we got busy setting up camp. As we were finishing a Peace Corp volunteer showed up so we invited him to dinner and he filled us in on the slow but steady progress he’d made in the area in terms of teaching the villagers about environmental practices and all the reasons why being more ecologically minded (not poaching crabs and fish from the protected lake, for example) is ultimately good for them.

Then the sky opened up and it rained like mad. George’s tent was leaking, so he spent the night in his car a short distance below the camping area. We woke up at 6 am the next morning to clear blue skies and another, less pleasant surprise.

As we emerged groggily from our tent and wandered around camp getting ready to make some coffee and wake George up, something just didn’t seem right. That’s when we noticed that our Coleman camp grill and stove was gone. So were our two collapsible camping chairs. And our huge Coleman cooler. We’d been robbed! Feeling distinctly violated, we woke George up and told him what had happened.

Did we mention that our friend George worked for PROATUR? That’s a division of Guatemala’s department of tourism and the sole function of PROATUR is to assist and protect tourists.

Rental car broken down on a deserted highway? Want to visit an area of the country where it seems wise to have an escort? Having a dispute with a cab driver or tour operator you think is trying to rip you off? Had your camping gear stolen on the shores of a volcanic lake? Just call 1500 and PROATUR operators (who speak English and Spanish) will register your problem and send an agent (like George) to help ASAP. They do this 24/7. Totally free. No questions asked.

Yeah, it’s not good that visitors to Guatemala have these problems in the first place, but this stuff happens to travelers all over the world. How many countries can you think of that have created a division of government staffed with field specialists who solve and avoid tourist-related problems for free? Exactly.

Needless to say, when George realized we’d been robbed he sprung into PROATUR action, and by action we mean he and Eric rallied the stunned and outraged CONAP officials (who believed that a local crab poacher who visits the lake pre-dawn after a big rain probably snatched our stuff shortly before sunrise) and they literally tracked the thief through the forest.

Burdened with heavy, awkward, and super-conspicuous stuff (it’s tough to look normal when you’re hauling a cooler, two camp chairs, and a camp stove) the idiot had started slowly ditching his ill-gotten booty soon after he fled the camping area. What was he planing to do with the stuff anyway? There’s no ice for the cooler way up here and he’d failed to grab the fuel for the stove or vital parts. The chairs might come in handy…

Anyway, first Team PROATUR recovered the cooler (with a few beers still inside). Then they found the stove. Next, the chairs turned up. Since CONAP were the local authorities and they believed they knew who to blame for the robbery, George reluctantly left the catch and convict phase of the operation in their hands.

Then we all enjoyed some well-deserved coffee and a relieved laugh at the expense of the most inept thief in Guatemala. Thanks PROATUR!