Isabela Island is the largest island in the Galapagos Islands archipelago in Ecuador. There’s so much to see and do on Isabela–active volcanoes, a top snorkeling spot, tortoises on the trail–that many boat itineraries include two days of exploration on Isabela. Here are highlights (and video!) from four of the most popular travel destinations on Isabela Island including Bahia Urbina, Elizabeth Bay, Tagus Cove, and spectacular Punta Vicente Roca. 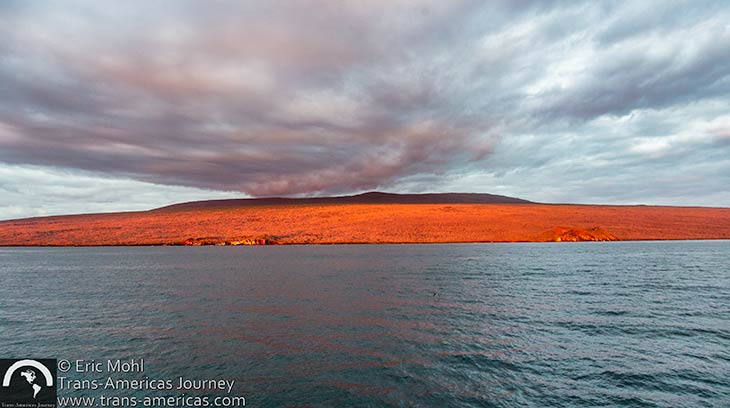 Approaching a colorful stretch of coastline on Isabela Island in the Galapagos Islands in Ecuador.

Exploring Isabela Island in the Galapagos

This seahorse-shaped island, which joins six active volcanoes, is one of the youngest islands in the Galapagos and the largest island of them all at 1,771 square miles (4,855 square km). Unlike most of the islands in the Galapagos archipelago, which was designated a UNESCO World Heritage site in 1978, humans live on Isabela Island. The town of Puerto Villamil, on the southernmost end of the island, has more than 1,800 residents, mostly fishermen and people involved in tourism. There’s even a small airport on Isabela Island. 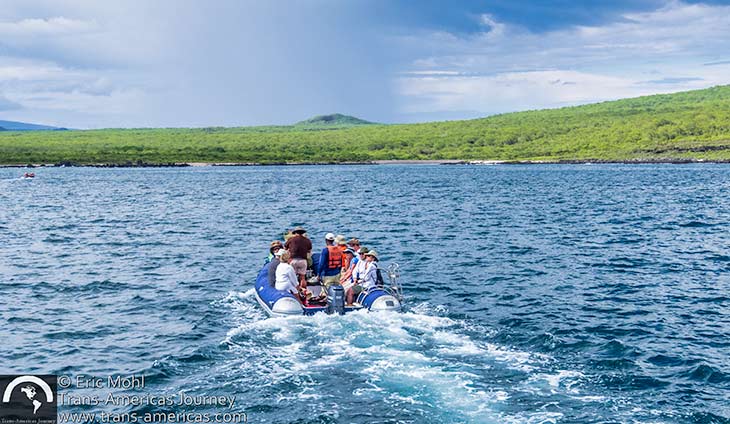 A zodiac taking travelers to Bahia Urbina on Isabela Island.

Much of Isabela Island is closed to tourism. However, there are about a dozen areas of the expansive island that travelers can visit. Isabela Island is too far from Santa Cruz Island or San Cristobal Island for day trips, so the only way to explore this spectacular place is to stay in Puerto Villamil and explore from there or explore Isabela Island as part of your itinerary on multi-day cruise boat trips. We visited four Isabela Island destinations while onboard the M/Y Grace with Quasar Expeditions and during our trip on the M/V Eric with Ecoventura.

Trampled by tortoises at Bahia Urbina 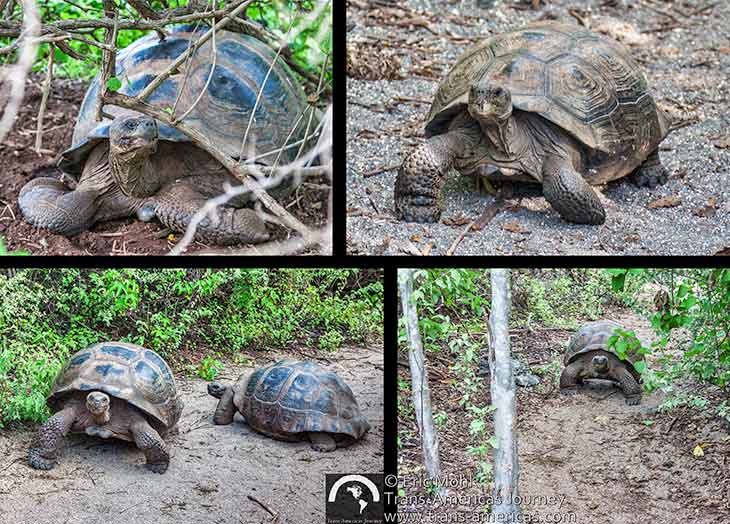 While hiking the loop trail inland from Bahia Urbina on Isabela Island we saw Galapagos giant tortoises everywhere including on the trail, wedged under some bushes, getting frisky, and more. The shell of the young tortoise in the upper lefthand corner was particularly beautiful because it hadn’t been roughed up by life yet. 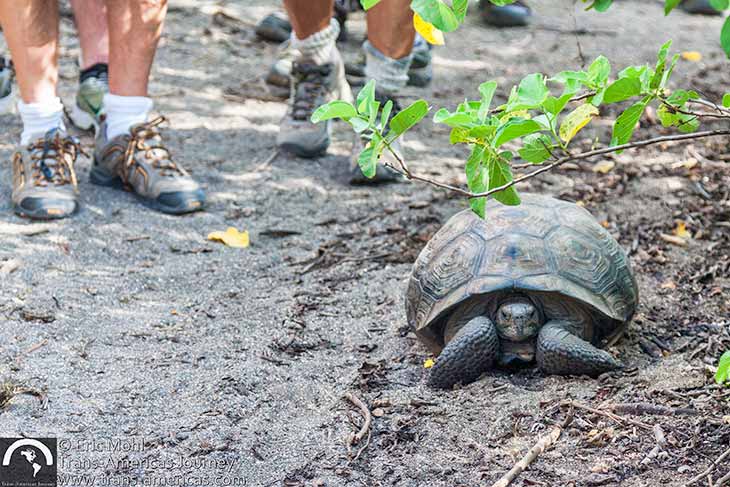 Galapagos travelers slowly skirt around a young Galapagos giant tortoise on the trail at Bahia Urbina on Isabela Island.

The tortoises on Isabela Island are so giant because the cactus here grows edible paddles way up high on their tree-like trunks. Tortoises eat those cactus paddles and to survive they must grow big enough to reach them. 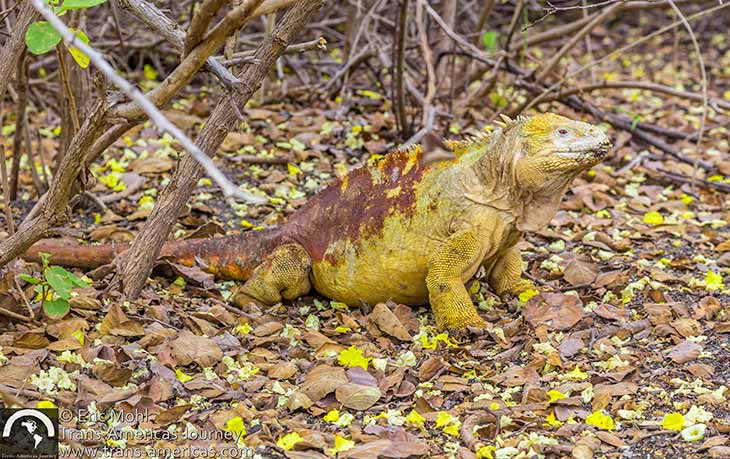 The land iguanas on Isabela Island were the largest ones we saw in all of our time in the Galapagos.

The land iguanas on Isabela Island also seemed to be supersized. We saw one that was at least 5 feet (1.5 meters) long from snout to tail tip–far larger than any other land iguanas we saw in the Galapagos. While hiking we also saw a Galapagos hawk, a top predator in the Galapagos, being bullied by much smaller Galapagos mockingbirds. Our guide noted that the hawk had returned to its old nesting site which was a type of behavior he’d never seen the hawks do before.

We also visited an area on Isabela Island that had very short and sparse ground cover. Our guide told us it was a camp used by sea cucumber poachers who cleared the land and poisoned the area with fuel and other contaminants used as they cooked the contraband cucumbers which were then sold to people in Asia who consider them to be aphrodisiacs.

The poachers were forcibly removed by the military many years ago (our guide said two of his friends were shot during the operation), but the land is so contaminated that it still hasn’t revegetated. 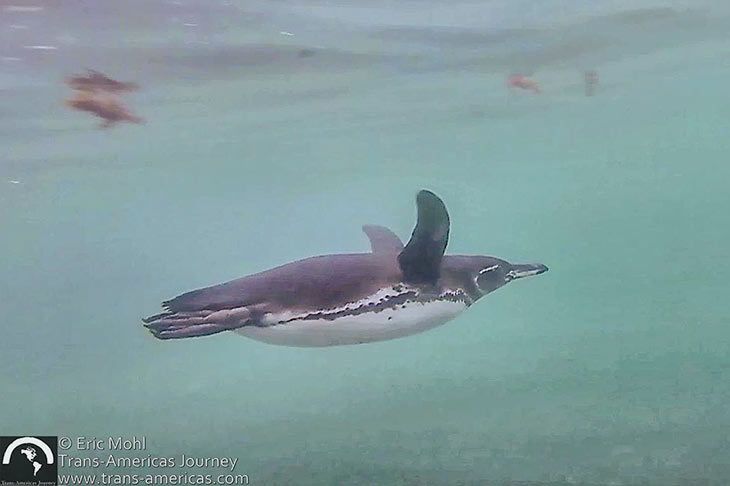 Galapagos penguins may not be able to fly in the air but they certainly fly underwater.

After the hot, dusty hike it was a pleasure to get into the sandy bay for a bit of snorkeling with Galapagos penguins (pictured above) and brown pelicans.

Pro tip: We saw many more Galapagos giant tortoises during our visit to Bahia Urbina in March than we did during our visit in December. This may be because March is within the tortoise mating season which brings more of them down from higher elevations on the island to look for a mate.

Don’t miss the tortoise mating footage (and much more) in our Galapagos travel video, below, from Isabela Island.

Landings are not allowed in Elizabeth Bay, so our tour of the area was done exclusively in a zodiac. First, we slowly patrolled the shoreline and circled a rocky outcrop in Elizabeth Bay where we saw Galapagos penguins, blue-footed boobies, flightless cormorants, and marine iguanas. Golden rays are sometimes seen in the clear water here, but we did not spot any. 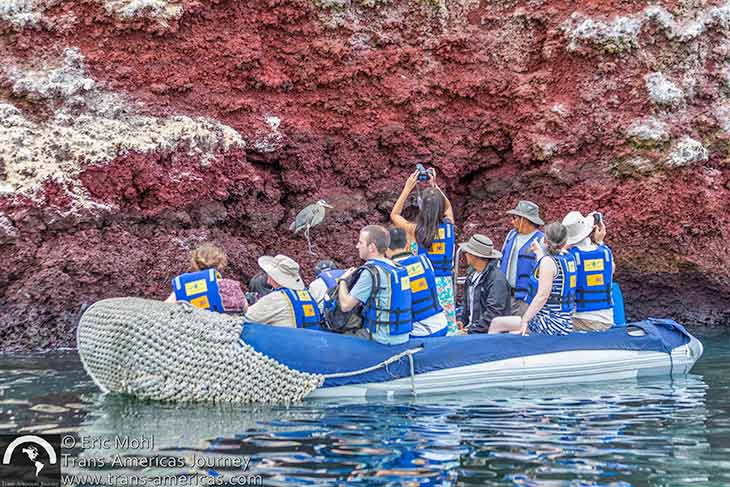 A zodiac full of Galapagos travelers slowly patrols the shoreline around Elizabeth Bay on Isabela Island.

Then the zodiac took us to Elizabeth Bay Inlet which is ringed with mangroves. This place is a haven for green sea turtles and we saw many.

Here are more photos from Elizabeth Bay on Isabela Island. 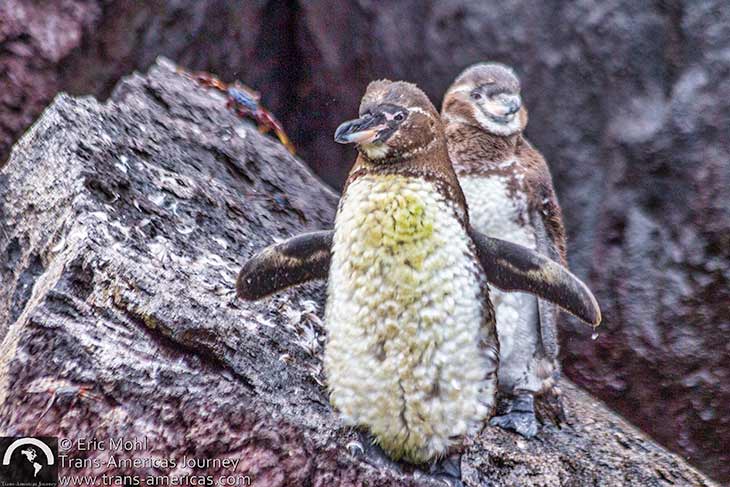 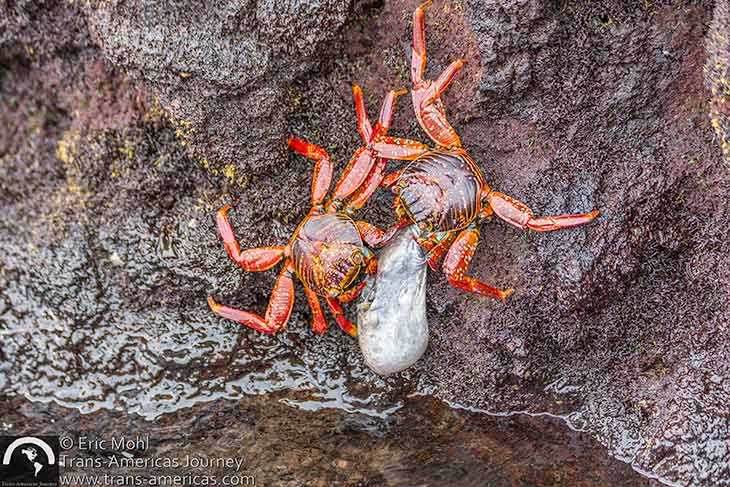 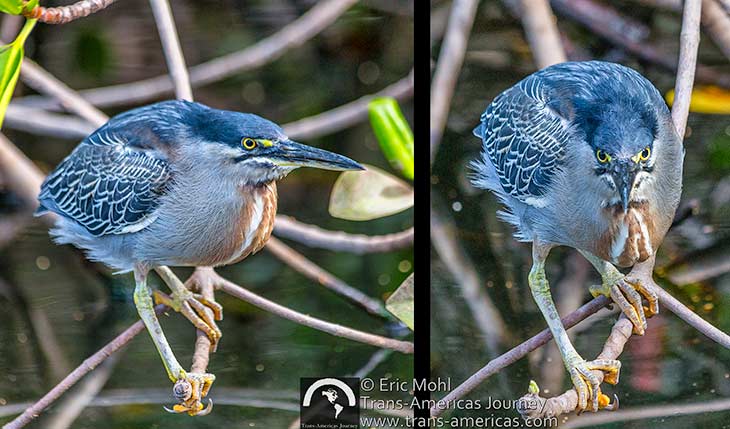 A lava heron on the hunt in Elizabeth Inlet on Isabela Island. 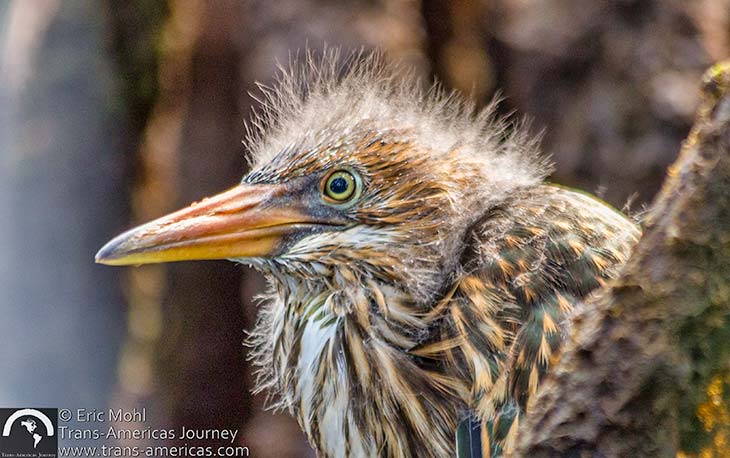 A juvenile striated heron in Elizabeth Inlet on Isabela Island. 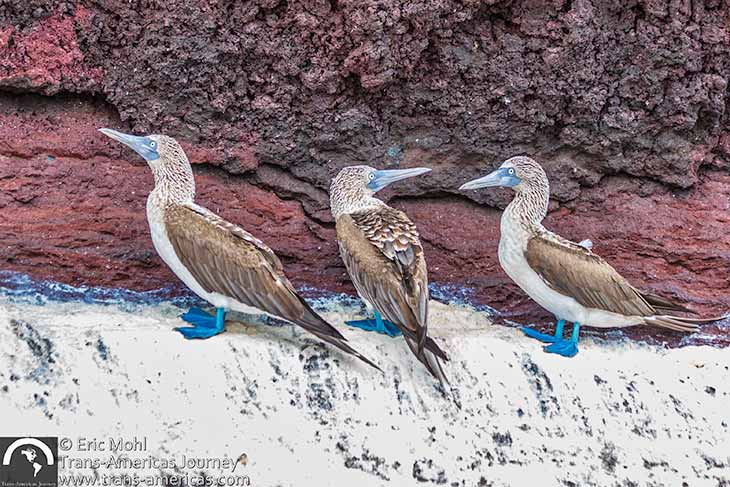 This cove was frequented by pirates and whalers who started a tradition of inscribing the names of their ships near the cove. After our zodiac landed at Tagus Cove, we walked to the inscription spot to see the names of ships that had visited in the past. The oldest inscription that’s still visible dates back to 1936. The inscription from the HMS Beagle, the ship that carried Charles Darwin to this spot in 1835, has been removed for preservation.

Many walks in the Galapagos Islands are relatively flat. However, Isabela Island is made up of six volcanoes which means that this island has more hills than usual. After looking at the ship inscriptions, we walked up to a crater lake that Charles Darwin visited in search of fresh water. Unfortunately, the crater lake, now called Darwin Lake, is full of saltwater. 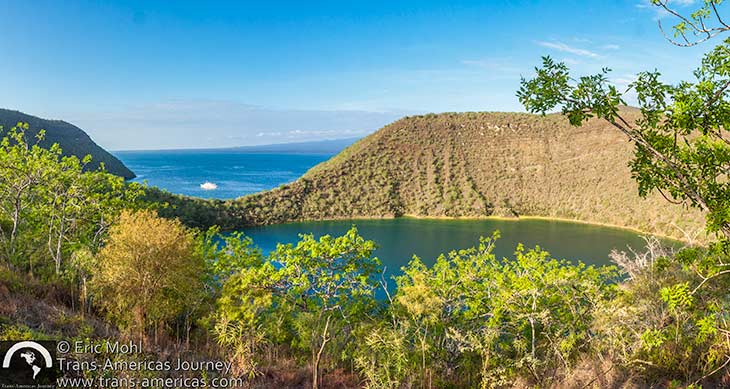 This crater lake on Isabela Island is named for Charles Darwin who visited it in search of fresh water.

There may not be any fresh water up there, but the views from Darwin Lake down onto Tagus Cove are lovely. Fun fact: our guide told us that the water level in Darwin Lake is always at the same level as the ocean. 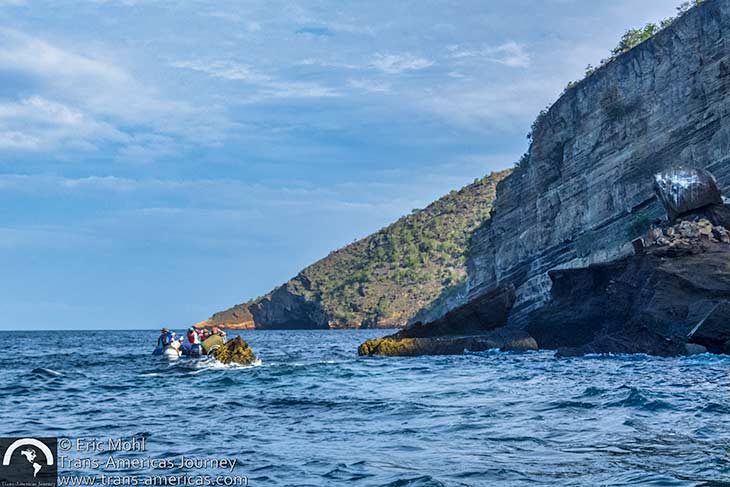 After climbing back into the zodiac, we motored around the shoreline spotting Galapagos penguins before grabbing masks and fins for a snorkel in Tagus Cove which is an iconic Galapagos snorkeling spot for a reason. 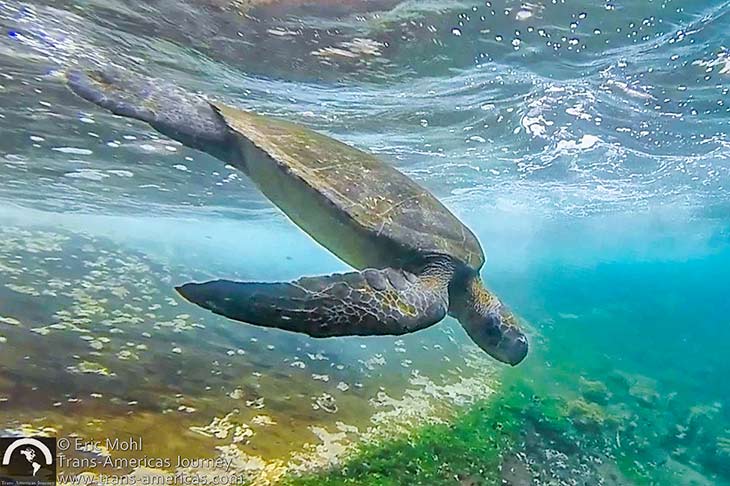 One of many green sea turtles we saw while snorkeling in Tagus Cove.

During our snorkel, we saw intricate coral formations, lots of aptly-named chocolate chip starfish, vibrant reef fish, and small schools of barracuda. We also saw a very large boxfish, at least four seahorses (a very rare sight), lots of green sea turtles, and a fishing cormorant. We’d grown used to the curious and playful presence of sea lions whenever we were in the water, but we didn’t see any during our snorkel in Tagus Cove. 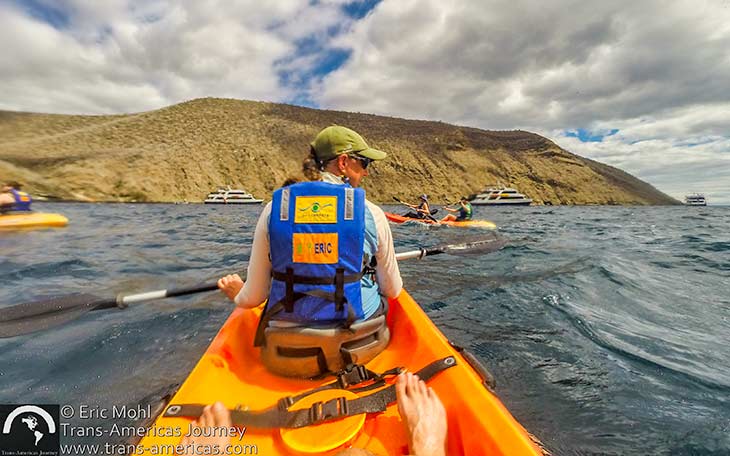 Our kayaking excursion in Tagus Cove was made more adventurous by wind and chop.

During one of our two visits to Tagus Cove, we also had the chance to kayak in the bay. A bit of wind and chop added to the adventure during which we saw leaping dorado fish and Galapagos penguins on the shore.

Animal highlights: While snorkeling we saw seahorses, Galapagos penguins (on the shore and a few darting around in the water), chocolate chip sea stars, green sea turtles, a boxfish, and flightless cormorants (including one fishing).

Here are more photos from Tagus Cove on Isabela Island. 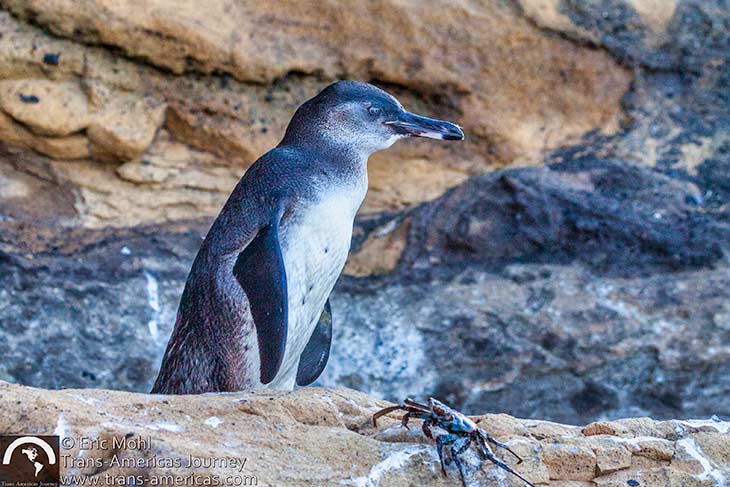 A Galapagos penguin and a Sally Lightfoot crab share a rock in Tagus Cove on Isabela Island. 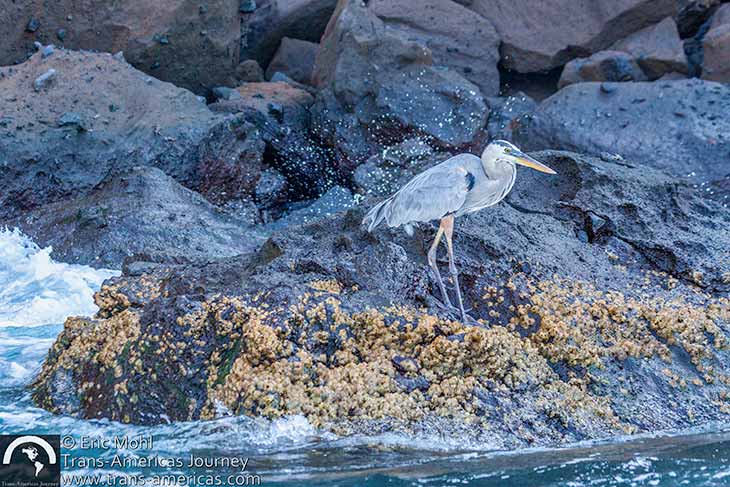 From Tagus Cove, it’s a 2-hour boat journey through open ocean to Punta Vicente Roca which juts out of the northwestern end of Isabela Island. Along the way, we saw a large group of mobula rays which also lept out of the water with amazing force in a stunt that helps shear parasites off their skin. 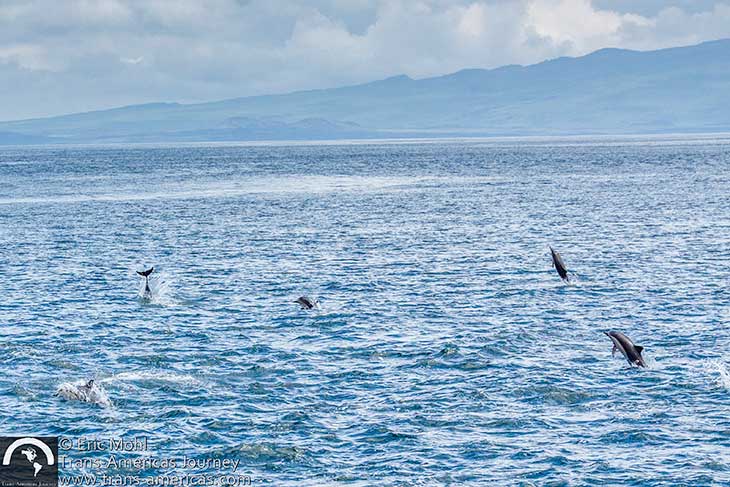 Just a few of the hundreds of common dolphins we saw as our boat took us through open ocean from Tagus Cove to Punta Vicente Roca.

We also saw a pod of 200 or more common dolphins (their white inset side panels reminded us of the design of some vintage vehicles like Corvettes). They lept and played as if showing off just for us, though they were probably feeding.

Then we noticed the odd vertical fin of a sunfish which is a very, very rare sighting. We saw at least eight of these odd creatures (Google it, it was impossible to get a good shot from the moving boat) before we reached Punta Vicente Roca. 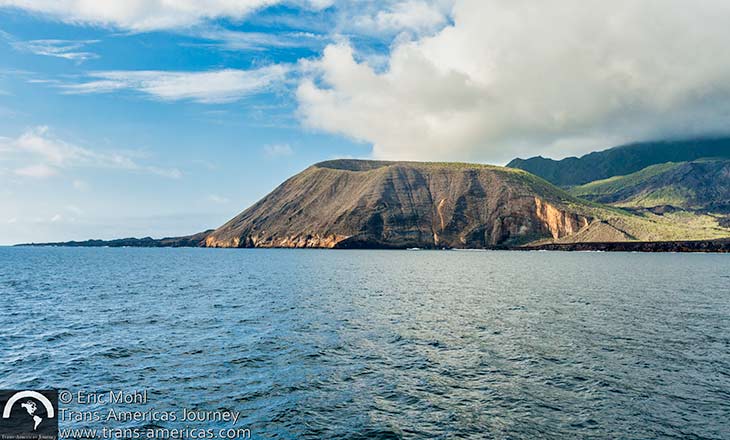 After loading into a zodiac, we left the main boat and toured the shoreline around Punta Vicente Roca, including nosing carefully into a small cave. The cave was dramatic, but the most thrilling moment of the zodiac tour came when we spotted the fin of a big Galapagos shark as it broke the surface of the water near our zodiac. 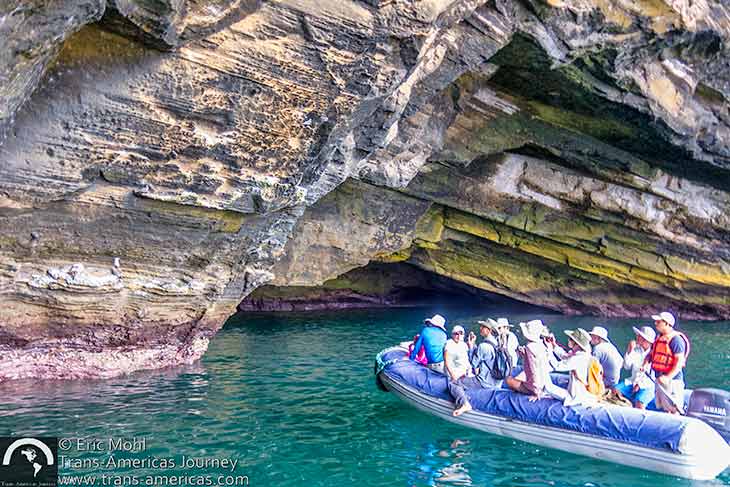 A zodiac takes Galapagos travelers into a natural cave in the shoreline near Punta Vicente Roca.

While snorkeling, we saw dozens of hunting penguins that darted past us like bullets. There were plenty of playful sea lions, many green sea turtles, diving cormorants, and lots of bright reef fish too. We also saw three scorpionfish (one of which was eating another fish) and an octopus. At one point Karen raised her head above water and a skimming lava gull nearly crashed into her.

Punta Vicente Roca delivered the most sea life (thanks Cromwell Current), most gorgeous surroundings, and overall most breathtaking snorkeling experience we’ve ever had. It was like being inside an elaborate, well-stocked enclosure at the Monterey Bay Aquarium. There was so much wildlife here that by the time we returned to the main boat our necks were sore from looking around at so many wonderful things.

Activities: zodiac tour along the coastline and into a cave, snorkeling

See more of the spectacular underwater show at Bahia Urbina, Tagus Cove, and Punta Vicente Roca in our Isabela Island snorkeling video, below. 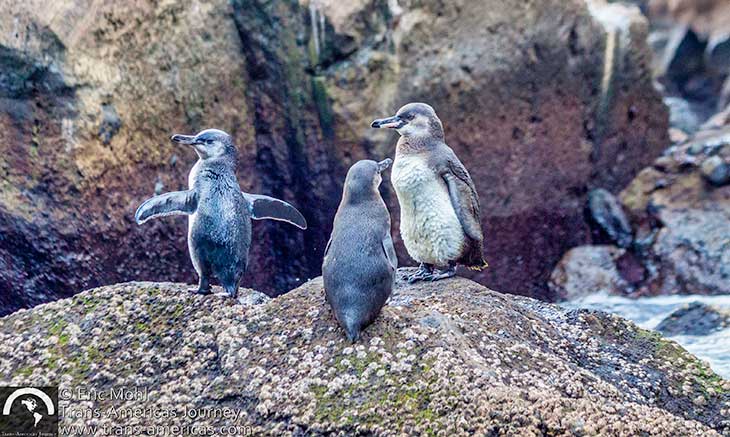 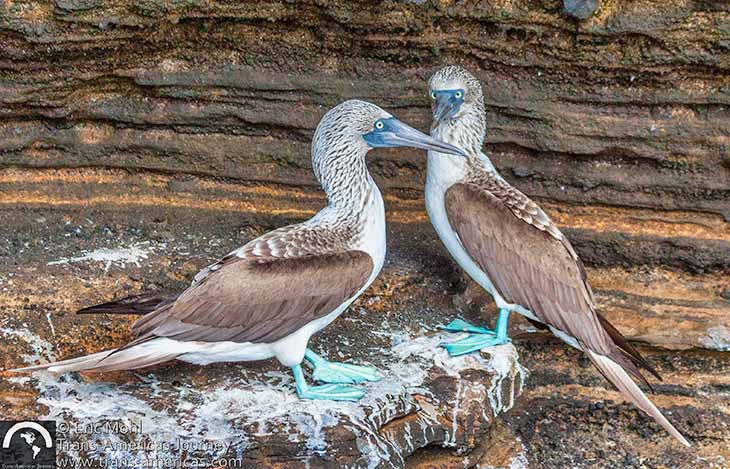 Blue-footed boobies on the shore near Punta Vicente Roca on Isabela Island. 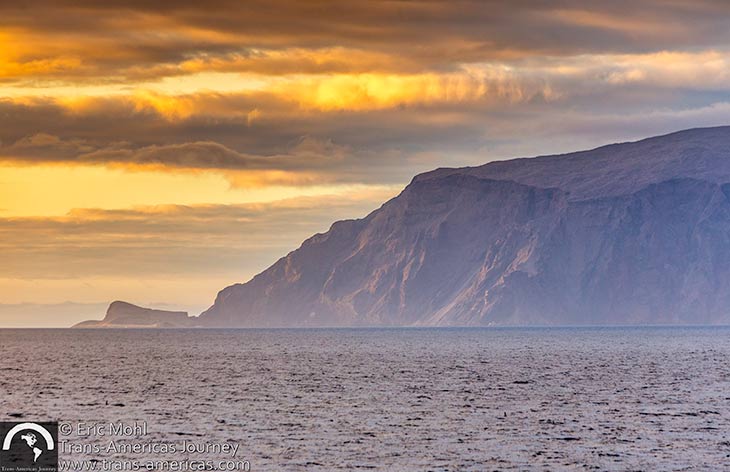 Sunset over Punta Vicente Roca after another wildlife-filled day in the Galapagos.