The town of Copacabana, Bolivia sits on the shore of Lake Titikaka (spelled Titicaca in Latin America). Its main claim to tourist fame is the chance to visit Lake Titikaka, which the Incas considered sacred as the birthplace of their god, and the temples on Isla del Sol in the lake. Sadly, a years-old dispute between island residents has closed the northern half of the island and there’s no end to the dispute in sight. But you can still visit the southern half of the island, and here’s what you need to know to about adventure travel to Isla del Sol and nearby Isla de la Luna. 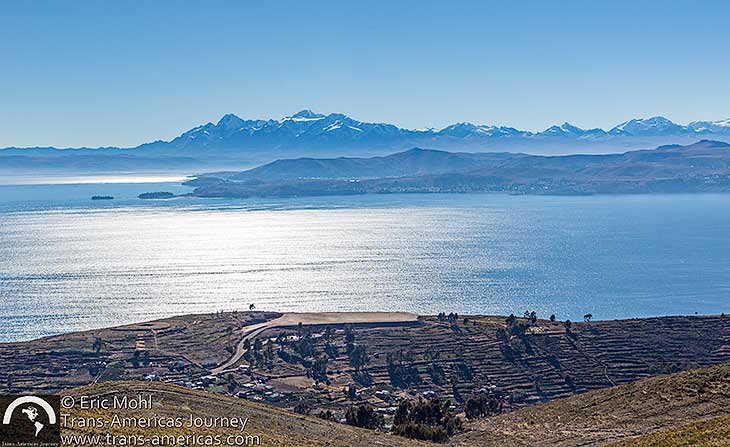 That first mound of land in Lake Titikaka is Isla del Sol with the snowy Cordillera Real in the distance.

Since 2016, Isla del Sol in Lake Titikaka, where about 3,000 people live, has been embroiled in an increasingly violent dispute between two of the island’s three communities. In January of 2018, a Korean tourist was stabbed to death on Isla del Sol when she crossed from the southern half into the northern half of the island. 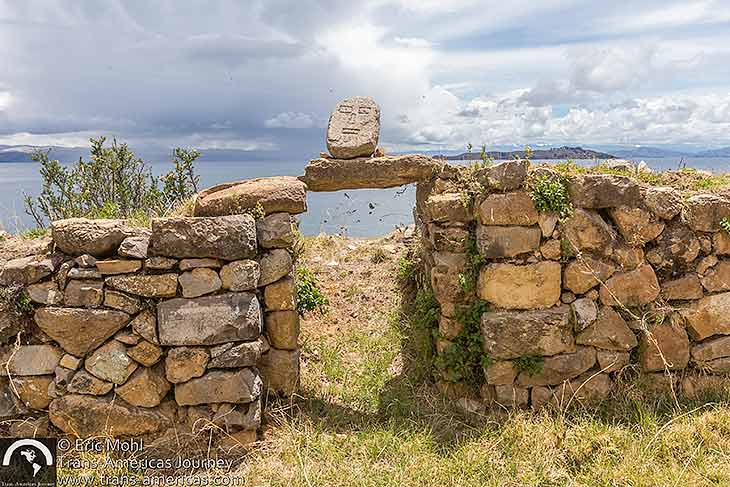 Part of the Temple of the Sun on Isla del Sol.

The problem is that the two feuding communities, the Challa and the Challapamap, can’t agree on how to fairly split income from the entrance fees charged to tourists who visit the Incan archaeological sites on the island. Local guides told us that the island residents say they need two more years to work things out and Bolivia’s minister of tourism has threatened to shut down all access to the island if the problems can’t be resolved. But the government has limited options for intervening since the Bolivian constitution, re-written by President Evo Morales in 2009, gives broad rights of self-governance to local communities like the ones on Isla del Sol. 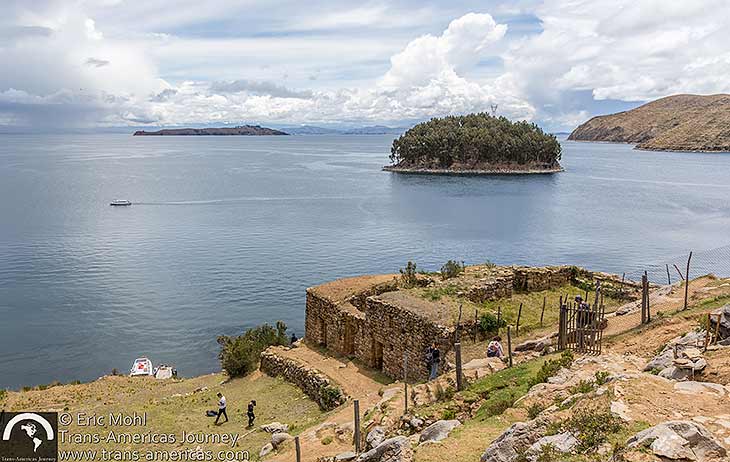 Looking down o the Temple of the Sun.

Titikaka: The cradle of the Incas (and more)

After waiting in vain for the island dispute to work itself out, we gave in and booked a trip to the southern half of Isla del Sol and to Isla de la Luna with Turismo Bolivia-Peru travel agency. The Inca considered Lake Titikaka sacred and believed the original Incan King emerged from the lake. Both Isla del Sol and Isla de la Luna, named for the two major Incan gods, were also considered sacred and, during Incan times, they were only inhabited by priests and virgins. 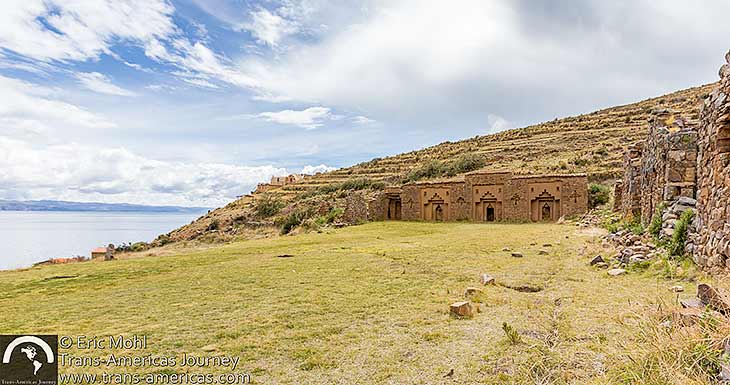 What remains of the Temple of the Virgins on Isla de la Luna in Lake Titikaka.

Lake Titikaka is up to 992 feet (281 meters) deep and, at 12,507 feet (3,812 meters), is the highest navigable lake in the world. It’s also full of mysteries. The Tiwanaku people were actually in this area before the Incas and many of their structures and treasures are now submerged in the lake. The Bolivian government now has plans to build an above ground and underwater museum to showcase some of the relics submerged in Lake Titikaka.

Some locals still speak of a two-headed snake monster that lives in Lake Titikaka. Boating accidents are sometimes blamed on this Lock Ness of the Andes. And the lake’s water is said to be 10 degrees Celsius pretty much constantly. Another mystery? Our guide told us that the real name of the lake is Lake Titicarcar (which means silver puma), but the Spanish heard “titikaka” and made it so. 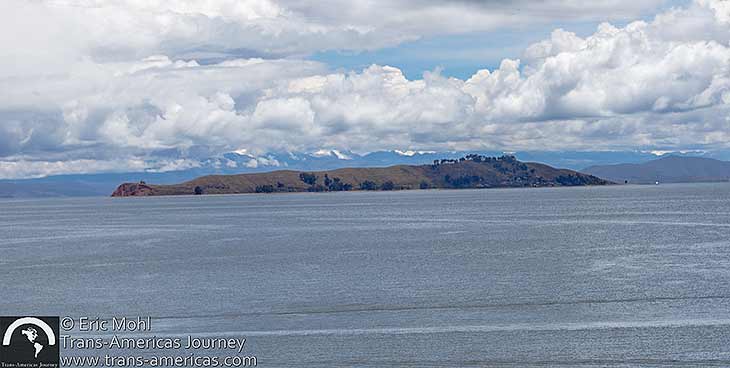 From the lakeshore docks in Copacabana, we boarded a comfortable boat with an enclosed sitting area, open-air benches on the roof, and plenty of life vests, for the peaceful and smooth 1.5-hour ride to Isla de la Luna. The water around this small island, where about 10 farming families live, was crystal clear. Wandering llamas greeted us and the community has built a clean and modern bathroom facility (2 bs or about US$0.30) and a lovely rounded restaurant on a bluff. But we were there to see the virgin complex. 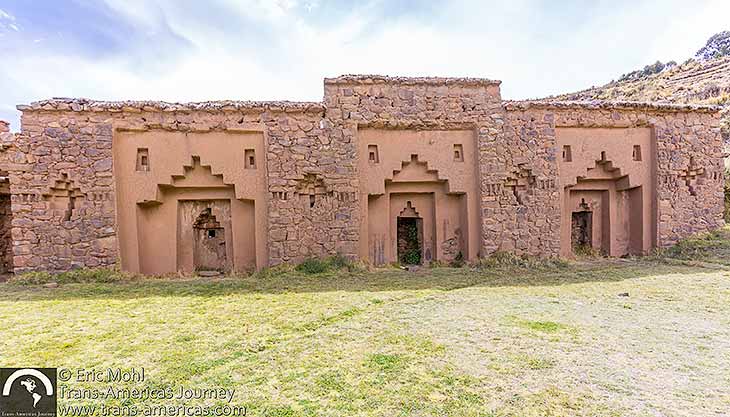 Ornate edifices, featuring the distinctive Andean cross motif, at the Temple of the Virgins on Isla de la Luna.

A rotating cast of about a dozen virgins lived in an ornate temple and housing complex on Isla de la Luna (10 bs or about US$1.50) along with four older women who were their caretakers and teachers. Their job was to prepare the virgins for their ultimate fate: sacrifice on Isla del Sol. The temple is in remarkably good shape and you can still see Incan and pre-Incan walls, entryways, and even edifices with the distinctive Andean cross motif. 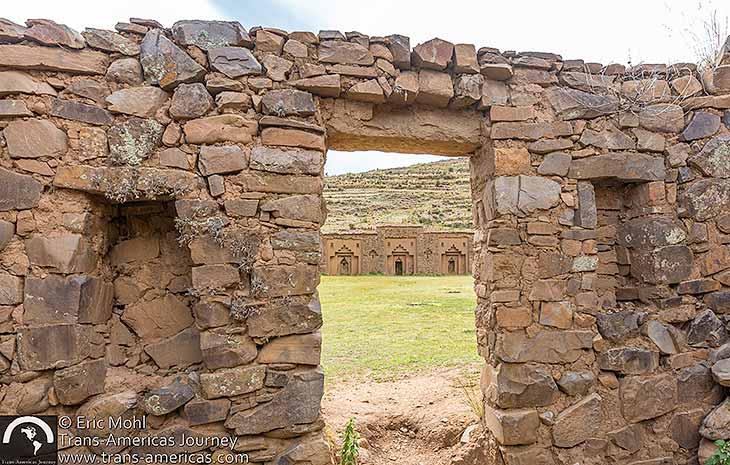 Part of the Temple of the Virgins. 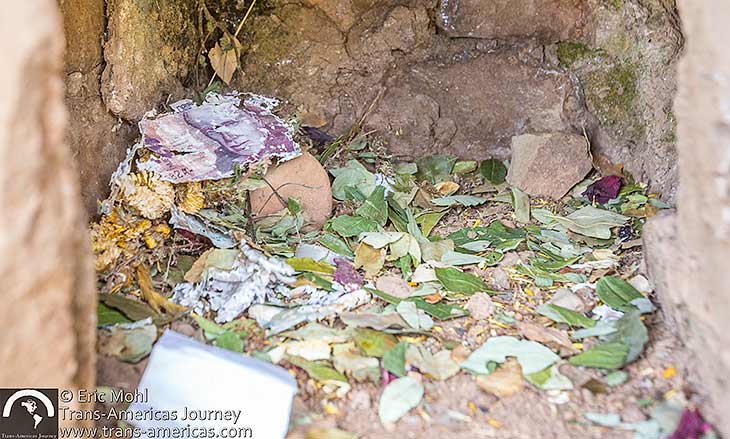 Offerings are still left in small wall niches that remain at the Temple of the Virgins.

As we traveled the 30 minutes by boat from Isla de la Luna to Isla del Sol, the clouds seemed to be just inches above the surface of the lake, as if the lake had risen to the very ceiling of the world. When we reached Isla del Sol, we headed for the Pilcokaina (Place of the Birds) pier and began our exploration from there. 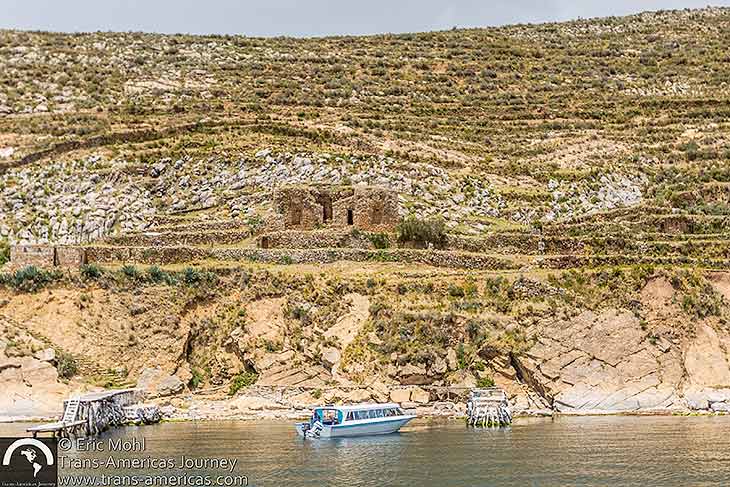 Docking at Isla del Sol near the Temple of the Sun.

First stop: The Temple of the Sun which sits just above the dock (10 bs or about US$1.50). This squat stone construction, built to conform to a slight upward slope, was where the Inca made human sacrifices and the bodies were then mummified and put into niches in the construction. 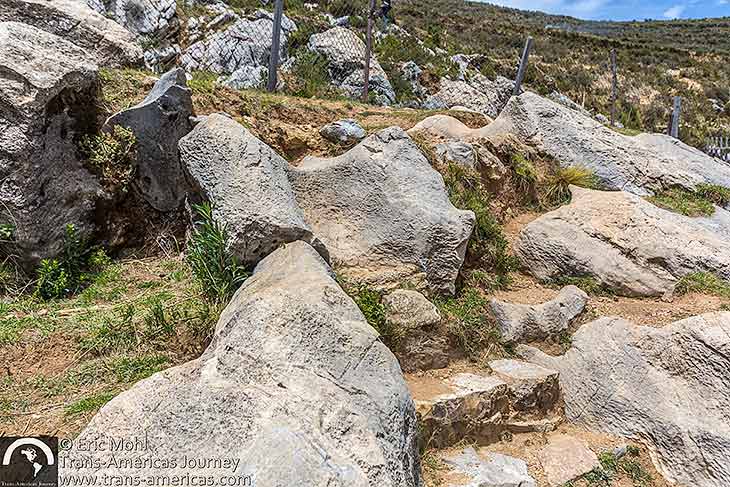 Some think this concave stone may have been where virgins were placed before they were sacrificed at the Temple of the Sun on Isla del Sol.

Above the temple, our guide pointed out a smooth, lounger-like rock which some believe was the spot where the virgins from Isla de la Luna lay down to be sacrificed. 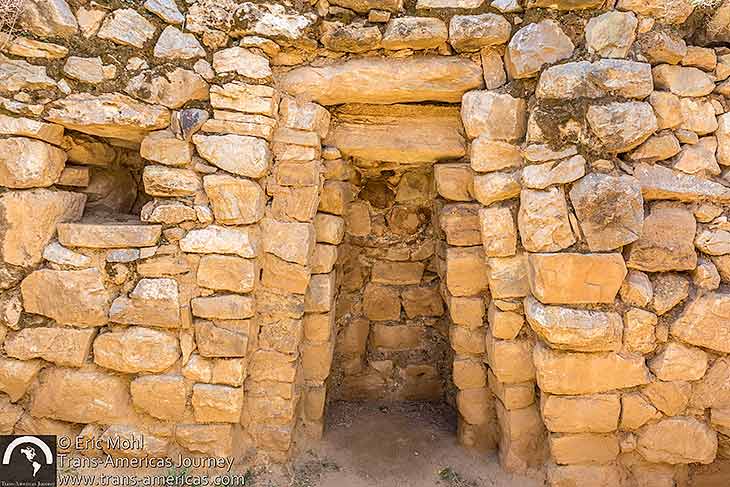 Niches like this at the Temple of the Sun would have contained mummies.

From the Temple of the Sun, we continued to climb along the island’s Incan Trail which connects the Sacred Rock in the north of the island (where animal sacrifices were performed) to the Temple of the Sun. The trail is wide and in good condition and we shared it with donkeys, llamas, and sheep and their herders. After a fairly easy climb, the trail flattened out toward the village, passing a number of lovely guesthouses, hostels, and hotels. 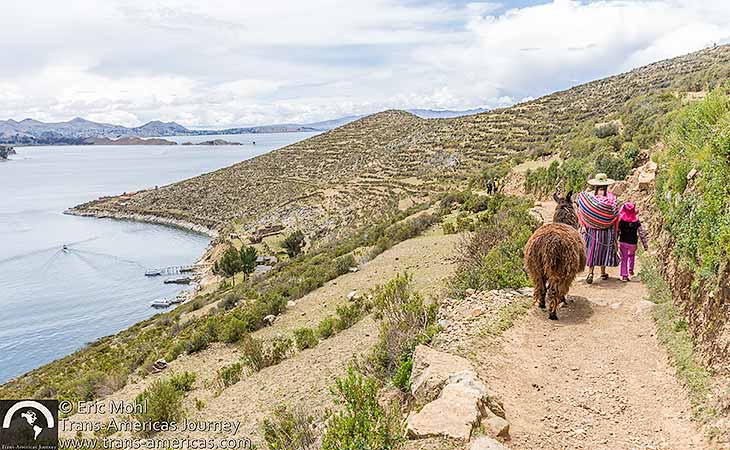 Traffic on the Inca Trail that crosses Isla del Sol.

For some reason, we were under the impression that accommodation on Isla del Sol was limited to very basic homestays. That is certainly available, but the hotels we saw were comfortable, stylish and inviting (much more so than anything in Copacabana) and we immediately wished we’d planned to spend a night or two on the island instead of returning to town.

In fact, the entire Yumani village, where about 1,200 people live, in the south of Isla del Sol is lovely with simple, tidy homes, well-kept fields and gardens, roaming livestock, and lots of new construction since all tourists come to the south now with the ban in the north still in effect. There are plenty of simple, clean restaurants, Wi-Fi, and, in general, the village was much more developed than we expected. 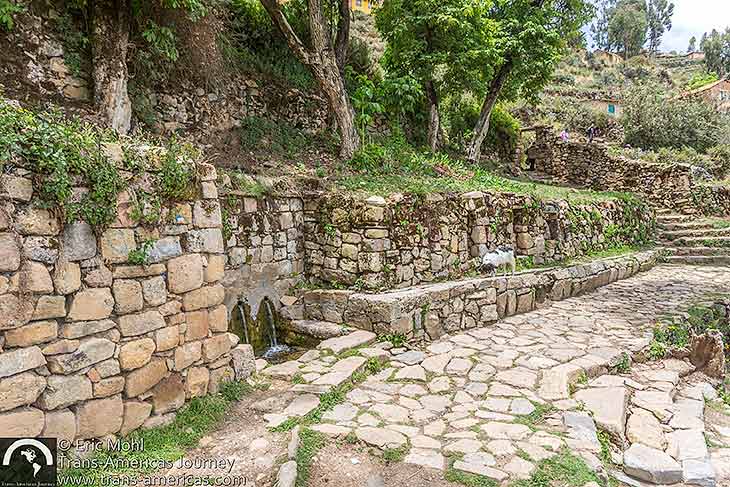 The so-called Incan Fountain of Youth.

We descended back toward the lake through the heart of the village passing the Fountain of Youth with its three spouts, one for each of the Inca’s top three “commandments” (do not steal, do not lie, do not be lazy). Then we got back on our boat and traveled a couple of minutes around a bend in the lakeshore to a private cove to Moise’s Restaurant where we had a traditional Aptapi lunch which is the type of meal that’s served during big celebrations when people bring whatever ingredients they can. 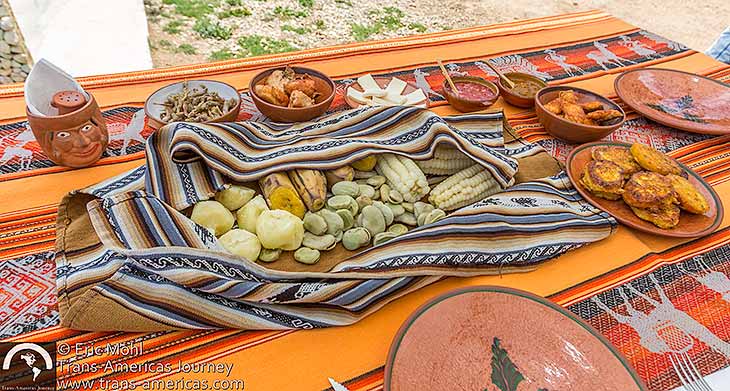 Our exploration of Isla de la Luna and Isla del Sol ended with a bountiful and delicious lunch on the shore of Lake Titikaka.

Our lunch, served on an outdoor patio, included a huge spread of habas (fava beans), choclo (sweet corn), potatoes, two delicious homemade salsas, trout, chicken, tiny fried fish, and light fritters. More than 90% of the ingredients were grown on the island. We spent the one-hour return boat ride to Copacabana in a pleasant food coma.

How to choose a Lake Titikaka tour company

Copacabana is full of tour companies flogging all kinds of trips including trips to Isla del Sol and Isla de la Luna. We chose a tour agency called Turismo Bolivia-Perú because they’ve been in business for more than 15 years and they have the experience and staff to offer trips tailored to specific needs–like combining Isla de la Luna and Isla del Sol into one trip for us (prices are based on your personal itinerary and the number of people in your group). We also liked the fact that the company’s guides and drivers are all Bolivian. Note: Turismo Bolivia-Peru does not have an office in Copacabana. Contact them through their website or make arrangements in their office in La Paz. 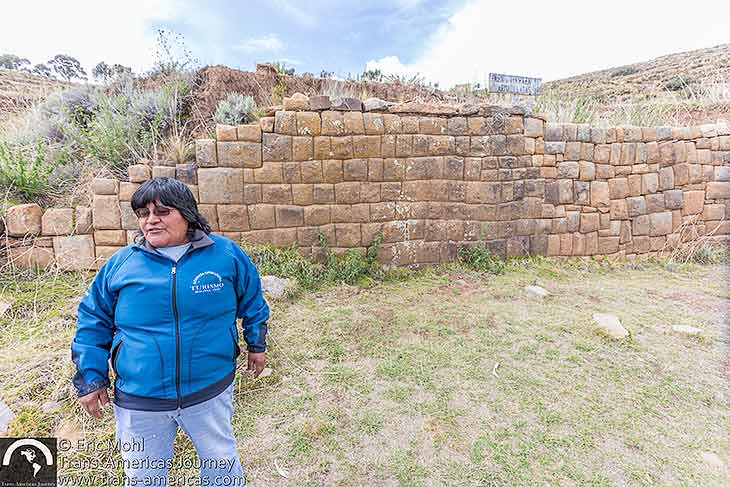 Communication with the tour company was good (even after office hours) and we felt like we were in good hands based on a commitment to flexibility, teamwork, knowledge of the history and customs of the area, years of experience, and native guides and drivers. Willy, our boatman was skilled and careful (even when gunning it through a tight shortcut that everyone uses). And our guide, Jael Amaru, was experienced, enthusiastic, and informed and she spoke great English (and Spanish and French and Italian and Japanese and Aymara). She taught us most of what’s included in this post. Fun fact: she has also guided former US President George W. Bush. 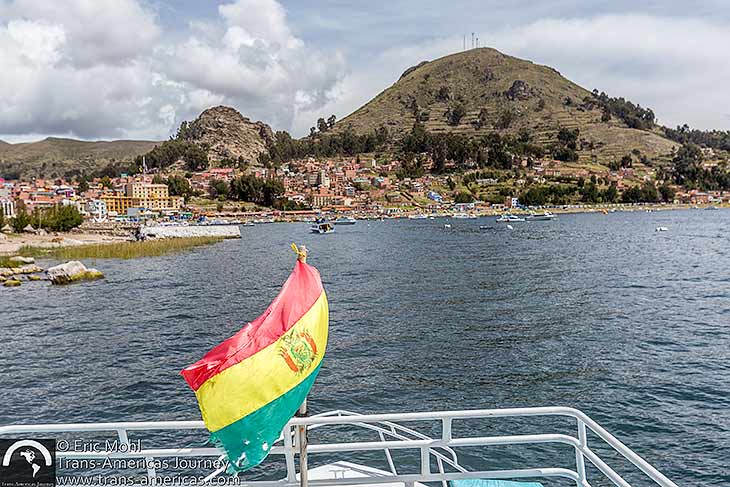 Go in the morning. The islands seem to get much more crowded in the afternoon so leave Copacabana as early as you can. Travel to Isla de la Luna first, then head to Isla del Sol. Many tours go to Isla del Sol first, so if you start at Isla de la Luna you can beat the crowds (we were the virgin temple there by ourselves) and there are many more options for lunch on Isla del Sol so you want to be there when it’s time to eat.

You don’t need hiking boots, but wear sneakers or other comfortable walking shoes. Dress in layers, and bring a raincoat. The weather changes quickly. And wear sunscreen and a sun hat, especially if you plan to travel on the uncovered roof of the boat to take photos and enjoy the scenery.