We saw more than 50 species of birds during two days of bird watching at La Milpa Field Station in Belize and we have The Bird Ninja to thank for that. 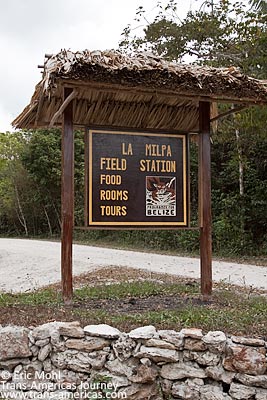 There’s a jaguar right on the sign for La Milpa Field Station.

In the 1980s the Bowen family, which also owns Belikin Beer, the Gallon Jug cattle ranch, and nearby Chan Chich Lodge, sold off more than 100,000 acres of their land to help create the Rio Bravo Conservation and Management Area. At 260,000 acres, the RBCMA is the second largest single protected area in Belize encompassing 4% of the country’s land mass.

Today, the RBCMA is home to 200 species of trees, 390 species of birds, 70 species of mammals and—most importantly—all of the big cats that are native to Central America, including what some consider to be the healthiest population of jaguars in the region. Programme for Belize runs the RBCMA including its two field stations (La Milpa and Hill Bank) which each offer dorms, bungalows, and a restaurant for visiting researchers and travelers. 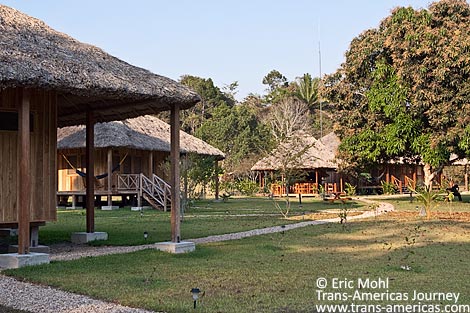 In early 2010 the La Milpa Field Station in the Rio Bravo Conservation and Management Area unveiled eight new cabins, making it even more pleasant to spend a night or two here in the jungle.

In January of 2010 the La Milpa Field Station unveiled eight new bungalows and a refurbished dorm building and all of the accommodations are sparkling clean and more than comfortable with plenty of space and private bathrooms (in the bungalows) or giant inviting shared bathrooms in the dorm which is often booked by visiting research and university groups.

There’s even a small restaurant which turns out simple but tasty meals all day. Even better, every single tourism dollar gathered at La Milpa Field Station and Hill Bank Field Station (which offers similar accommodations and services) goes to support the non-profit Programme For Belize. 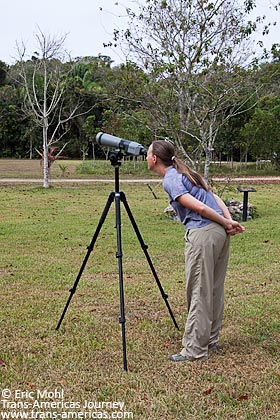 Karen scanning the skies at La Milpa Field Station in the Rio Bravo Conservation and Management Area where nearly 400 species of birds live or migrate through.

Another great reason to visit the La Milpa field station is manager Vladimir Rodriguez, aka The Bird Ninja. With more than 10 years of experience in and around La Milpa, Vladimir literally knows this jungle like the back of his hand. More importantly, he knows the hundreds of species of birds that live in or migrate through this area. He knows them by sight. He knows them by habit. He knows them by call.

He knows them so well that one minute he can be pointing out a tiny green-breasted mango hummingbird in its delicate nest, then hear a call behind him and whip around to precisely point to a red-throated ant tanager on a branch behind us. That’s why we call him The Bird Ninja. His skills helped us spot more than 50 species of birds in just two days at La Milpa Field Station. 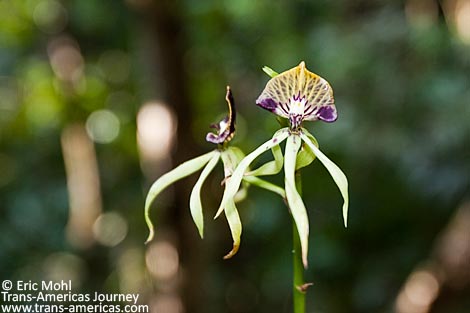 This tiny black orchid is the national flower of Belize.

Darkness doesn’t bring an end to the wildlife spotting in the Rio Bravo Conservation and Management Area, it just means there are different creatures to look for. Armed with a range of high-powered flashlights, we hopped into the bed of a truck and headed out on a night safari along a dirt road.

New and different birds presented themselves, including an owl-like thing called a northern potoo. We also got the chance to see a gray-tailed fox which, we were told, can climb trees, and The Bird Ninja spotted a tiny Yucatan banded gecko in the dark. Don’s ask us how. 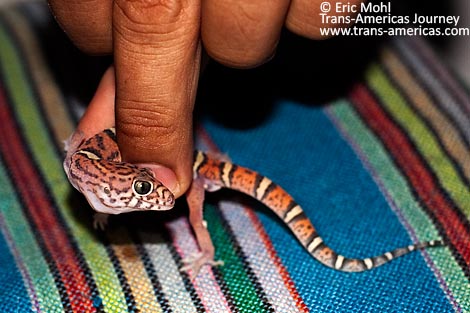 As if all that wildlife wasn’t enough, La Milpa Filed Station also has its own Mayan ruins. The La Milpa site, about three miles (5 km) from the Field Station, is largely unexcavated but has been researched and explored for years. When we were there profs, students, and researchers from the University of  Texas were studying the site. 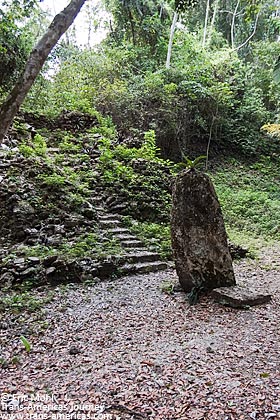 Incredibly, this stele at the largely unexcavated La Milpa Mayan site is in its original position.

The La Milpa site hasn’t been all dug up and reconstructed like other Mayan archaeological sites in the region (like Lamanai and Altun Ha). This means a lot is left to your imagination and that makes it really engaging to wander around the mounds and just picture what the city might have been like.

La Milpa is also very lightly visited so you’re likely to have the place to yourself except for the resident spider monkeys and other creatures. Not far from the La Milpa site we actually saw claw marks and a scent patch in the ground from a cat who’d passed through earlier in the day. 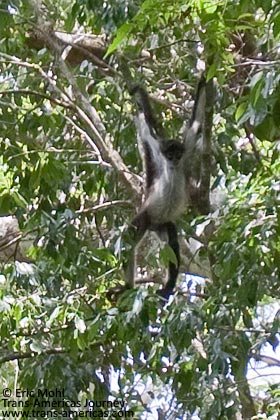 There was evidence of humans too. Hatchet marks on tree trunks are the work of chicleros who tramped the jungles of Belize tapping chicle trees for their sap which was turned into chewing gum until synthetic ingredients took over and killed the natural chicle industry in the 1950s. The scars remain on trunks throughout the jungle. 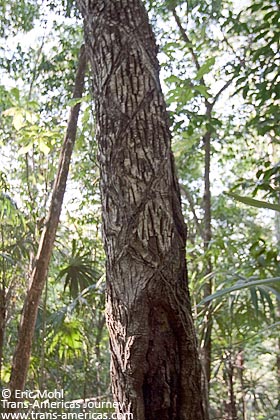 This chicle tree is scarred by the work of chicleros.

Bilstein monotube gas-pressure shock absorbers which evened out the miles and miles of pot holes we faced between Orange Walk Town and the remote Rio Bravo Conservation and Management Area.

Our BF Goodrich All-Terrain T/A KO tires which stood up to the jagged rocks along the way.

SureFire flashlights which kicked out more than enough light to illuminate large sections of canopy and jungle floor, helping us spot wildlife (including a gray-tailed fox) during night safaris.

Point6 wool socks, which kept our feet dry and cool no matter how much jungle tramping we did.