It’s a travel truth that applies even to lifers like us: The more you travel the more likely you are to find the place that makes you want to stop traveling and stay for a while. For us, Lagos de Moreno in Jalisco, Mexico may be that place. Over the next five posts we’ll do our best to convey the appeal of this sleepy, dusty, little-visited spot in central Mexico. Is it the people? Is it the history? Is it the desert? Is it the horses? Is it the horsemen and horsewomen? Is it the haciendas? Is it the pride? Is it the tequila? Let’s get started at Hacienda El Ahito. 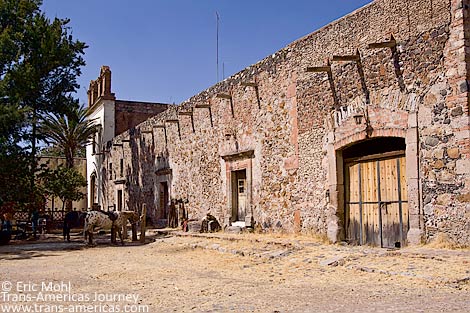 Hacienda El Ahito, in Lagos de Moreno, Mexico, was built many generations ago by Pancho’s ancestors and has been in his family ever since.

We start our little Lagos de Moreno-arama in the very first place we saw with the very first people we met when we first visited Lagos in 2009. What was meant to be a brief stay turned into almost three weeks thanks to the hospitality, peacefulness, wisdom, and grace of Jorge “Pancho” Serrano Zermeno and Lena Kissling at their Hacienda El Ahito.

El Ahito is not one of those luxuriously restored haciendas (we’ll get to some of those in upcoming Lagos de Moreno posts). The floors tilt a bit, the hinges creek, the paint peels. But it all adds up to a laid back, atmospheric ease that brings to mind cowboy hippies, if such things existed.

El Ahito is also a working hacienda where registered charolaise and simmental cattle and registered appaloosa horses are raised. It’s also Pancho and Lena’s home and home to an aging caretaker and his family members who have lived on this piece of Mexico for their entire lives. Nothing happens on the sprawling, cactus-covered El Ahito ranch without one of them knowing about it. It is as if the dust and the lake and the fences and the mesquite are connected to each of them. 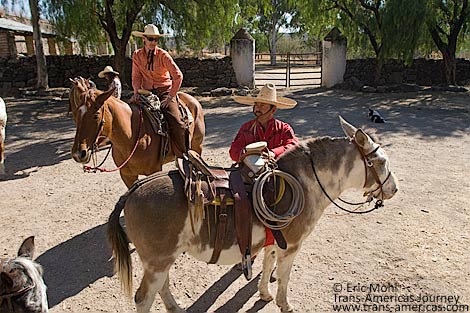 Unless he’s in trouble (a frequent condition) no one calls Jorge by his real name, preferring to stick with Pancho. It’s a nickname he picked up in Wyoming where he spent a few years working on the Willow Creek Ranch. That’s also where he met Lena who had left her native Switzerland to go work at the guest ranch too. 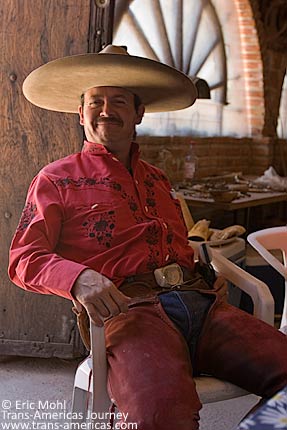 This is why he’s called Pancho and you’re not.

We’ll let you know as soon as the devilishly “imaginative” Pancho tells us the real story behind his nickname. For now, just believe us when we tell you that it’s fitting.

In late 2005, Pancho and Lena packed up their favorite horses and made a road trip that impresses even us: they drove thousands of miles in December from Wyoming to central Mexico pulling horse trailers.

Once back home at El Ahito, Pancho and Lena started building their dream and now they welcome guests and take riders from around the world into the wonderful landscapes of Jalisco. In the process they also bring them into the world of El Ahito, teaching you how to ride more like a Mexican charro (cowboy), which is surprisingly different from the western riding we’re taught in the US. 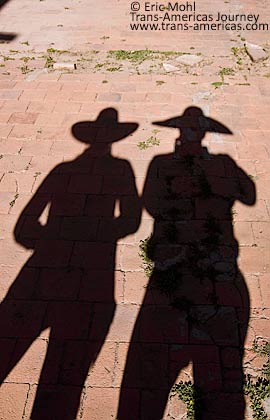 Long tall cowboys. Believe it or not, that’s us.

You’ll also learn how to slow down and appreciate, well, everything including the fact that you still can’t persuade your horse to move sideways along a gate so you can open and close it without dismounting. 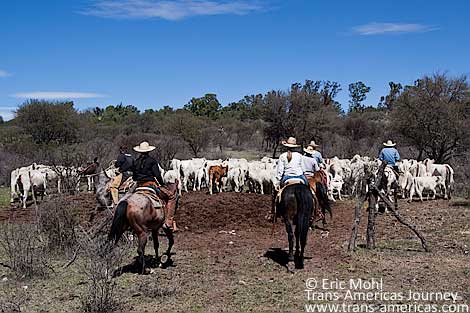 Fittingly, the word ahito means satisfaction and as long as you’re drawing breath you should be able to find it here. It’s in Lena’s delicious scrambled eggs mixed with bits of luscious mango and chiles. It’s in the way their dog Max is dying for you to throw him a stick, then can’t seem to find it even though its right under his nose. It’s in the daily fashion show put on by the hacienda’s peacocks, including a few stately albinos. It’s in the way Pancho uses one of his many enormous hand-crafted pocket knives to slice the most delicate slivers of his beloved habañero peppers before laying them onto hunks of pineapple and watching (with a Cheshire Cat grin on his face) as you pop it into your mouth. It’s in the sound of Lena and Pancho’s leather working tools as they whoosh and thump through the stages of hand-tooling belts and handbags and bridles and saddles and chaps (leave room in your luggage). 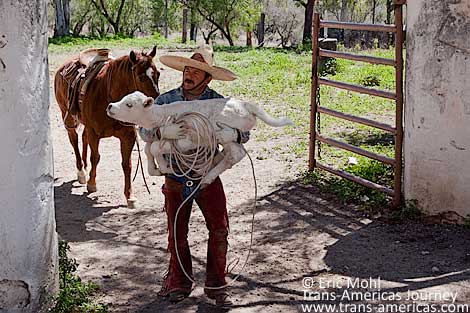 Pancho grabs a little escapee from the roundup.

At El Ahito, what’s normal is extraordinary. If you want to go see for yourself shoot Pancho and Lena an email at indianboymx at yahoo.com (allow some time for a response, they’ve both got far better things to do than check their email).