We loved our three weeks in Belize. But soon it was time to return to Mexico where, for some reason, they keep giving us tourist visas. We’re on our fourth (count ‘em) six month visa at the moment. First stop: Laguna Bacalar. 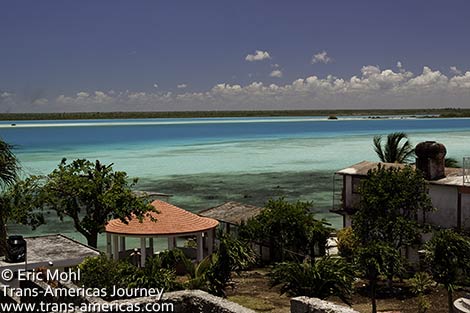 They call Laguna Bacalar the lake of seven colors, but turquoise clearly dominates.

We’d driven straight past Laguna Bacalar on our way to Chetumal on the border between Mexico and Belize and upon our return from Belize we took the opportunity to actually stop and check it out.

At 35 miles (56 km) long, Laguna Bacalar is the second largest freshwater lake in Mexico. It’s commonly referred to as “the lake of seven colors,” though an unbelievably intense turquoise seems to dominate. People swim, fish, and kayak in the lake and it’s even been the venue for speed boat races.

Cenote Azul is an enormous almost perfectly round sinkhole full of crystal clear water that bottoms out at almost 300 feet (90 meters). Entrance is free (unlike many cenotes in the area) and the owners have set up an open-air restaurant and bar on the shore. We were afraid it was going to be an overpriced tourist trap, but we were wrong.

You can sit and enjoy a beer for 20 pesos (about US$1) which is a good price even without the view. Or a get a meal (generous fish dishes were 100 pesos or about US$5). Or don’t order anything at all. We never felt any pressure to keep ordering to earn the right to hang out. Just be sure to respect their ecologically-minded request not to wear sunscreen or bug repellent when you get into the cenote. Those products leave an oil slick and contaminate the water. 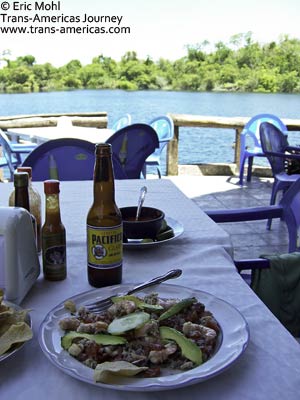 Lunch at the shockingly reasonsably-priced restaurant at gorgeous Cenote Azul.

Bacalar town was granted Pueblo Magico status by the Mexican government in 2006, though it’s hard to see why. Unlike other Pueblos Magicos in Mexico, Bacalar is no more architecturally or religiously or culturally intact than hundreds of other towns we’ve been to. It does have the Fortress de San Felipe which houses a small collection of pirate paraphernalia (Bacalar had a big pirate problem), but at 55 pesos (about US$3)—substantially more than more substantial sites in Mexico—it’s definitely overpriced. 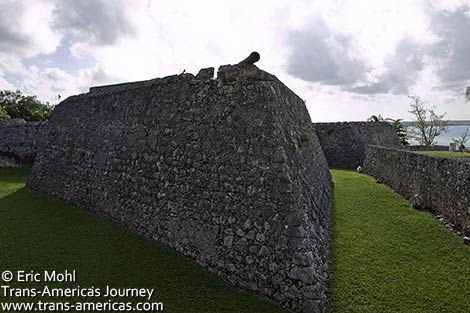 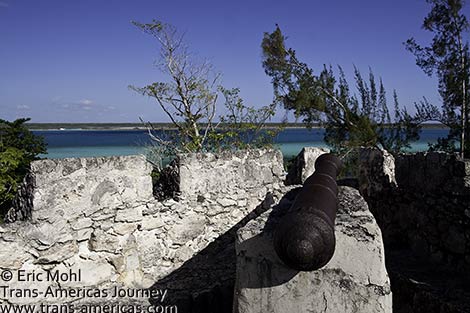 The view from atop the Fortress de San Felipe in Bacalar town.

Most accommodations at Laguna Bacalar are interesting, but a bit expensive. Casa Corazon, for example, looked like a great find for anyone with 700 pesos (about US$56) to spend. After looking at pretty much every option in town, we ended up at Casita Carolina with caretakers George and Janet.

Casita Carolina has a handful of rooms and two camping spots (full of Italians when we arrived) plus a massive lawn that rolls its way to the lakeshore. Our first room was a 450 peso (about US$36) cement block square with a good fan, lots of room, and good screens (though a strange lack of curtains).

Our budget, however, demanded that we downgrade to a cheaper room at Casita Carolina so the next morning we moved, when it became available, to a cramped palapa that seemed to be breeding mosquitoes. For 300 pesos (about US$23) we spent 45 minutes sewing up holes in the mosquito net and got eaten alive any time we were outside of it. Seriously. We could hear them laughing at our deet-laced repellent.

Moving on to Mahahual

Eventually the mosquitoes drove us away and we moved on to nearby Mahahual on the Costa Maya. It’s a popular stop for cruise ships and the biggest cruise ship in the world had just docked and had been labeled the “Monstro Turistico” by local newspapers.

The beach in Mahahual is narrow and the water is shin-deep and warm all the way out to the massive reef that sits just off the coast. It’s not good for swimming, but there are plenty of diving and snorkeling companies in Mahahual (like Dream Time Diving) which are prepared to take you to the reef and beyond.

A new airport being put in a bit further north is expected to create a tourist boom in the area and that explains the incredible amount of new hotel construction and existing hotel expansion in Mahahual—mostly in the mid to upper price ranges like Luna de Plata and Posada Pachamama.

Mahahual wasn’t our cup of tea (or our price point), so we nixed our plan to stay there and headed out to explore the beach road south to Xcalac. The sand road was in good condition and we passed a few more hotels out this way. The beach also got a bit wider and the reef was further offshore, creating a more inviting coastline. 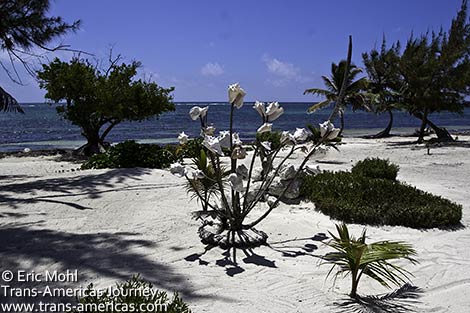 Conch shells and old re-bar combine to make this sculpture along the beach road south of Majajual.

Xcalac (ish-ka-lak) isn’t sleepy, it’s comatose (though we’ve since heard from expats with property there that the town does have a hidden lively side). We stopped at Xcalac Caribe for lunch (primarily because it was the only place that seemed to be open) and enjoyed surprisingly good food on the upper deck.

Then it was on to Tulum.

Quintana Roo is actually pronounced Quintana Row. Just in case you don’t want to sound like a complete tourist.