You probably know at least the basics of the legend of El Dorado which tells of a lake filled with gold and jewels whose secrets and treasures eluded Spanish conquistadors and modern day treasure hunters for centuries. Like most good stories, this one survives despite a profound lack of proof and some believe that Lake Guatavita in Colombia is ground zero for the enduring legend of El Dorado. 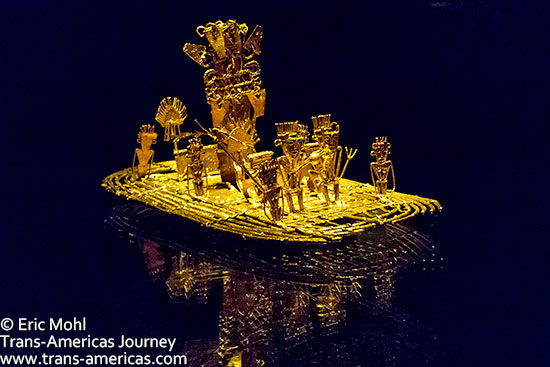 This solid gold recreation of part of the mythical Muisca lake ceremony is on display in the Gold Museum in Bogotá.

The enduring legend of El Dorado in Colombia

This part of Colombia is home to the Muisca people. In their heyday they were ruled by kings who were appointed only after going through a tough vetting process and those ultimately chosen were celebrated in an elaborate ceremony which, legend has it, involved the newly minted king covering himself with gold and paddling out into a lake before jumping in and washing the gold into the water.That habit earned the king the nickname “El Dorado” or, The Golden One.

It’s said that more gold and jewels were tossed into the lake for good measure and you can see an elaborate hand made rendering of a Muisca raft in solid gold at the fantastic Gold Museum in Bogotá.

Needless to say, a shiny legend like that got the gold-hungry Spanish conquistadors all in a tizzy. In their inimitable style they suppressed the Muiscas and forced them to form a macabre bucket brigade to try to drain the lake. After months of effort the water level had gone down just a few feet. Then the Spanish shifted gears and forced thousands of men into the task of cutting a notch in the rim of the crater to drain the lake.

That effort dropped the water level by about 20 feet (six meters), revealing some paltry trinkets before the support system collapsed killing many. And it wasn’t just the Spanish who were desperate to get their hands on the El Dorado treasure. A British group arrived with a steam pump and dug tunnels to try to drain the lake and failed. Treasure hunters were arriving as recently as the 1930s when hard-hat divers schlepped up to the crater, dove in and explored the lake’s muddy bottom for treasure. Nada.

These days Lake Guatavita is a protected area (so leave your SCUBA equipment and pick axes at home). You can travel there to see the crater lake for yourself during an easy day trip from Bogotá (about two hours and 35 miles (56 km) each way along a scenic but windy and narrow paved mountain road). If you don’t have your own wheels there are plenty of tour companies in Bogotá that offer group outings.

Lake Guatavita, where the legend of El Dorado lives.

In 2000 a conservation group took over Lake Guatavita and the surrounding area and created a protected zone. Workers spent six years putting in excellent brick and stone trails and letting most of the protected area regenerate after years of clearing, farming and hunting.

You must enter with a guide during one of the timed tours (last entry is at 4 pm; the site is closed on Mondays except during long weekends when they open on Monday but close on Tuesday; 14,000 COP/about US$4 for foreigners). Our tour took about an hour during which we stopped in a replica of a traditional Muisca roundhouse for a cultural cram session, then walked slowly along a short, easy trail (with a few steep sections) during which our guide explained more about the region, the lake and the legend (all in Spanish).

Once we reached the crate’s edge our guide pointed out the and could look down into the lake our guide left us to our own devices to  hike higher up to other view points. Gold or no gold, Lake Guatavita, with its green water, swirling mists, tenacious vegetation and lingering legend, is a lovely spot as you can see in our drone footage from Lake Guatavia, below.

Travel tip: We struck real gold when we were tipped off to a restaurant called Le Petit Alsace in the nearby town of Guasca (look for the French flag flapping in the breeze shortly after you turn off the main road toward Guasca, cash only, only open on weekends). 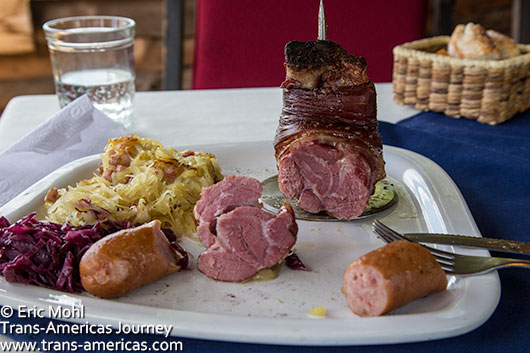 A typical (and delicious) plate at Le Petit Alsace.

Here, French chef Gilbert Staffelbach turns out escargot, beef Bourguignon, duck ala orange, rabbit in wine, and more in a rustic cabin as accordion music plays and he floats from table to table wearing full chef whites and a toque. Be sure to order the cheese plate which comes loaded with options made in-house using milk from his own herds of goats and water buffalo. 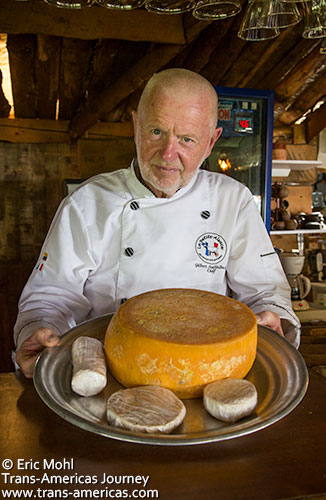 Chef Gilbert Staffelbach of Le Petit Alsace with just some of the cheeses he produces.