Belize is teeming with wildlife and the remains of ancient Mayan cities. The two go particularly well together just up the New River from Orange Walk Town where the bird-rich Crab-Catcher Lagoon laps at the doorstep of the rocky remains of a major Mayan city at the Lamanai archaeological site. 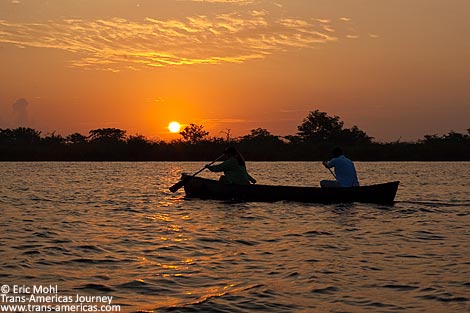 Paddling on Crab-Catcher Lagoon at 5:30 am for some pre-breakfast bird watching.

Crab-Catcher Lagoon is 28 miles (45 kilometers) long and, at times, it feels more like a winding river with its many arms and channels–some of them dredged by the Mayans as a way to bring water to their city at Lamanai. 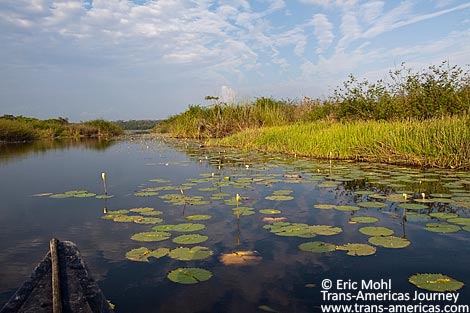 Bird-rich Crab-Catcher Lagoon offers many watery routes some of them dredged by the Mayans.

The waterways eventually open up into a wide, deep lagoon and the entire area is favored by birds and crocodiles and the occasional thirsty jaguar which we never saw but we’re not bitter or anything. 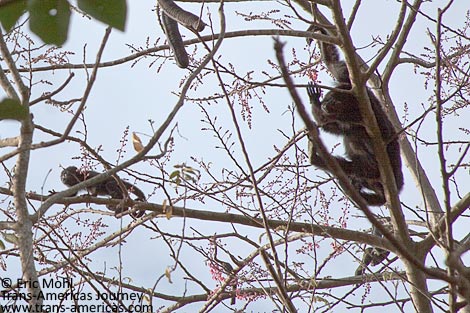 A howler monkey clan (check out the fingers on the baby) was hanging out right outside our bungalow at Lamanai Outpost Lodge one morning.

The wildlife of Crab-Catcher Lagoon

Though we saw gorgeous birds nearly everywhere we looked, it was ants that lead us to our rarest bird watching sighting. During our early morning canoe trip, we heard a ruckus in the underbrush and nosed in to investigate. 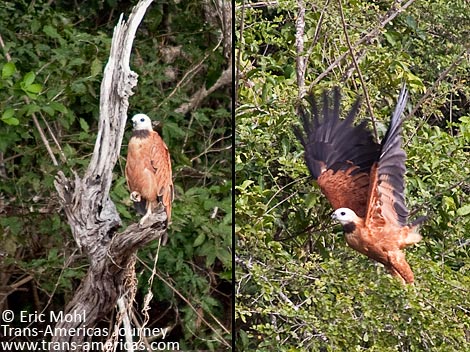 Black-collared hawks let us get within a few feet of them before they took off.

Then the earth began to move as swarms of army ants marched across everything in their path, oblivious to the rarely-spotted Yucatan jays (they’re the blue ones) which hopped around gorging on the insects. Check it out in our video, below.

Lamanai Outpost Lodge, right on the banks of Crab-Catcher Lagoon, has an impressive location and an even more impressive roster of excursions for guests. All of the usual suspects are on offer including jungle medicine walks, bird watching excursions, even a sunset cocktail cruise on their pontoon boat. But they also organize innovative tours like visits to members of a nearby Mennonite community, learning to cook like a Mayan with women in a nearby village, night time spearfishing or helping visiting researchers tag baby crocodiles. 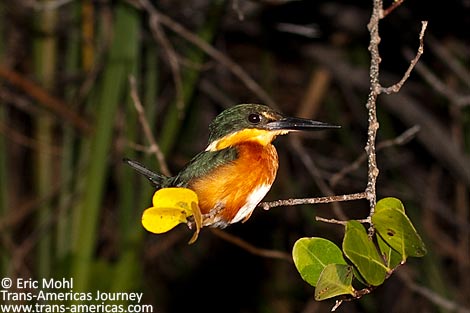 A pygmy kingfisher is no bigger than a handful of cotton balls and the adorable little things look just about as soft.

Nighttime is just as busy out on Crab-Catcher Lagoon with boat safaris using high-powered lights to spot the flashing eyes of crocodiles and the dozing outlines of birds.  It’s an odd sensation (a little creepy, like peeping) to watch birds which are usually flurries of activity during the day as they snooze like babies on tree limbs at night. 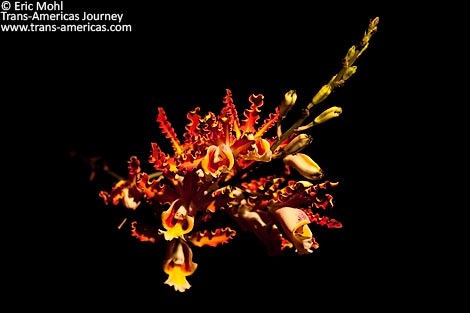 Darkness brings out a whole different side of the plants and animals that thrive in Belize’s Crab-Catcher Lagoon.

Strangely, at night the birds seemed to think they were invisible in the dark and they just sat there as we floated far closer to them than we could have gotten during daylight. And why don’t they fall off those limbs when they sleep? 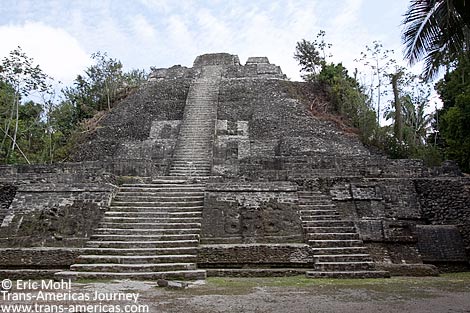 The High Temple, built in 100 BC, at the Lamanai archaeological site.

Beating the crowds at the Lamanai archaeological site

Anyway, another great reason to stay at Lamanai Outpost Lodge is the opportunity to start your tour of the neighboring Lamanai archaeological site (allow three hours at least) early in the morning so you can beat the heat and the boat loads of day-trippers from cruise ships which start arriving and clogging up the place by midday. 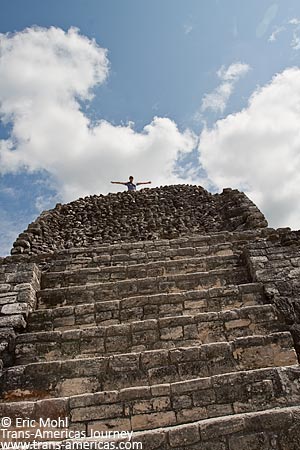 Karen at the top of the massive High Temple at the Lamanai archaeological site.

The Mayan city of Lamanai (which means submerged crocodile) is believed to have been settled as far back as the 16th century BC, yet most of it remained unexcavated until the 1970s. Now four distinct areas have at least been cleared and the massive temples, ball courts, and other structures are fascinating and huge–large enough to actually give the feeling of distinct neighborhoods. 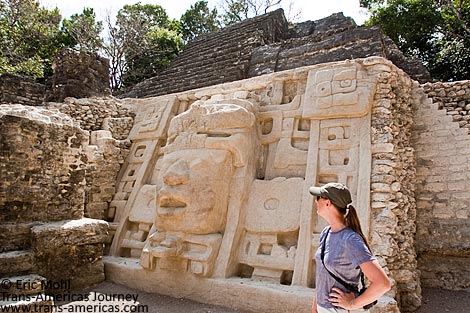 Karen checking out a recently placed reconstruction of one of the intricately carved faces which give the Mask Temple at the Lamanai archaeological site its name. 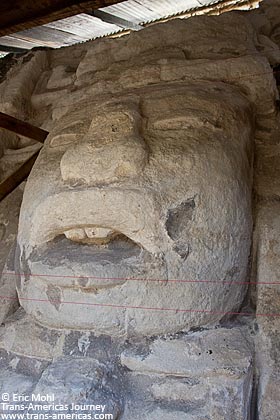 This original mask at the Mask Temple at Lamanai was about to be covered (for conservation reason) by a replica. 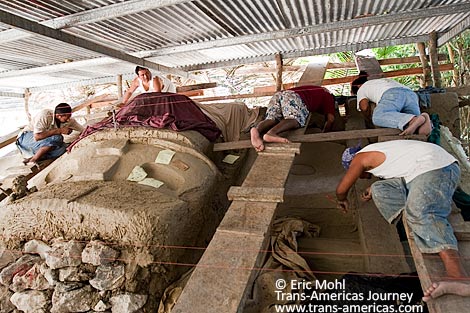 Artists at work on a replica of a carved face that decorates the Mask Temple at Lamanai. When they’re done, they will cover the original face with their copy in order to protect it. 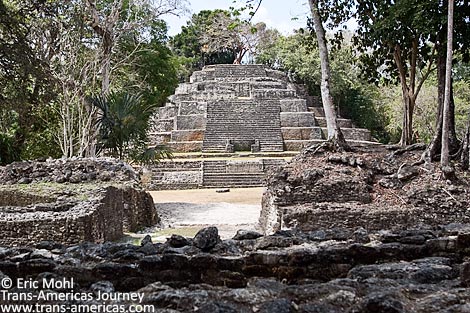 The Jaguar Temple at Lamanai. 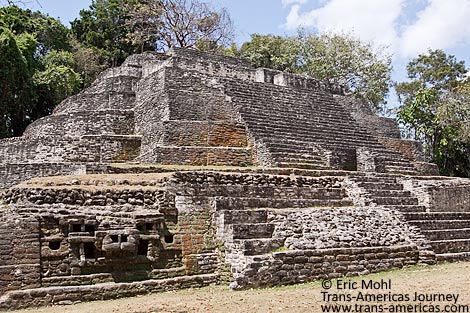 The Jaguar Temple at Lamanai. Note the distinct remains of a jaguar mask in the lower left-hand corner.

SureFire flashlights which helped us spot and approach dozens of birds in Crab-Catcher Lagoon during our night safari.

Costa del Mar sunglasses which are made for use on water and really cut the glare so we could see more during hours of touring on Crab-Catcher Lagoon.

Canon 50mm f1.4 Lens which is tough enough to take out on a boat or canoe and fast enough to shoot the smallest and darkest subjects even at night.